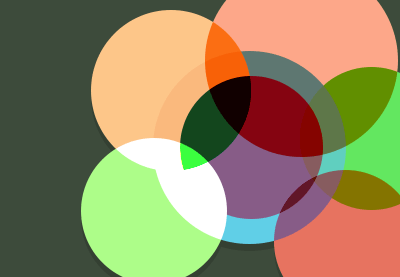 Much like Multiply’s lighter twin, the Screen set focuses on ways to blend pixels to make the resulting image brighter. In this lesson we look at the similarities and differences between the Lighten and Screen blending modes.

Hello everybody welcome back to Mastering Blending Modes in Adobe Photoshop. We're starting out on chapter four, which is the screen set of blending modes. This is lesson 4.1, where we take a look at the lighten and the screen modes. In many ways the screen set of blending modes is the polar opposite from the multiply set of blending modes. Multiply generally makes things darker. Screen generally makes things brighter. So once again, we have our set of gray boxes here at 40, 50 and 60% brightness. We'll take a look at what these do when set to the lighten and screen blending modes. We'll start with lighten. Now when this 40% brightness box is set to lighten, it's overlapping that 50% box, but it looks like it's behind it. That's because Photoshop is looking at the pixels in the blend in the base modes, and is displaying the one that's brighter. In this case, that's the 50% one. Now 60% would then be brighter than the 50. So even though it also is set to lighten, it is displaying the brighter pixels, which is the 60% brightness. This is the opposite effect of the darken blending mode. Also notice that I had to change the background here to black, because if we set this to lighten and it was a white background, it would show the white background and not the gray box, as so. So now let's try the screen blending mode. We'll set both of these to screen, and talk about what it's doing. In many ways, this is working just like the multiply blend mode. In that it's taking the color information from both the base and the blend colors. And it's multiplying them together. But in this case, it's actually multiplying the inverse. So the resultant color is always brighter. And it's brighter to the same degree that the multiply makes it darker, because it's simply the inverse of that same calculation. Likewise, the brushes work in the same manner. So if I have a brush set to screen and the color is set to the same 50% gray, it's gonna continue brightening that painted effect until it reaches a full saturation of 100% white. Let's take a look at how these blending modes work on a very colorful image. I've got this nice brilliantly colored image of these lanterns. And let's reveal our color bars again. Set the one on the right to the light and blending mode. And the one on the left of the screen. And discuss what they're doing differently. First of all, it should become obvious what they do the same. The black completely disappears and the white is rendered completely white. Remember, that's the exact opposite of what the multiply in darken modes did. But then let's discuss what's going on with the gray scale values in here. The lighten mode over here on the right, is, again, evaluating the pixels between the base and the blend pixels and displaying the one that is brighter. And likewise, with that darken mode, the lighten mode also has a little bit of blending happening when it uses colors over the background colors as well. And because of the nature of the pixel replacement idea, a lot of times we can end up with some strange pixelized effects. Whereas with the screen mode, it does a much better job of simply lightening things up. Where it's taking the color information of both the blend and the base, multiplying them together, and taking the inverse of that information as far as brightness goes. Therefore it always creates a brighter resultant pixel when you're screening these two together. The effect is intended to look like multiple photographic images projected on top of each other. Hence the name, screen. Next up is lesson 4.2 on the dodge modes. That's the color dodge, linear dodge, and the lighter color modes.