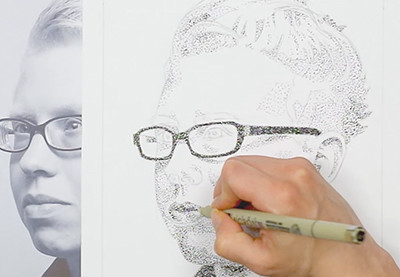 Now that we have the detail areas inked and the even value areas inked in the entire piece, it’s time to start blending. Your portrait probably looks a bit graphic right now due to the jumps in value. We’re going to start on the shirt, as it’s the darkest and thus takes the least amount of thought, and work to push things to a 7 and 9 on the value scale. You’ll add another layer of dots and squiggles, and that’s it!

So far, we've been inking in a base layer for all of the values on our drawing. But now it's time to really push those and work on blending. So the first thing we're gonna do with blending is to lay down a new layer of dots to help transition from one value area to another seamlessly. Then what we're gonna do is work on really pushing our value scale, so that our drawing has the full zero to nine in it, all the way from the whitest whites to the darkest darks. So as always for these next few lessons, you're gonna wanna have your drawing. You're gonna wanna have the black and white photograph. And you're going to want to have your gradation scale for reference. Once you have all of these, you're ready to start blending. All right, we're finally on to the blending part. So you probably notice that my drawing looks a little different. It's because I went in and erased all of my pencil lines. So keeping pencil lines in past this stage is a little bit of a bother, because they create a visual barrier along the contour lines, and they also distort your perception of just how dark you have gone, because they mix in with the ink, and make you think that an area is much darker than it actually is. So erasing at this stage means you get a much better idea of what the piece will look like when it's finished. So I would recommend going in now with a white eraser, and carefully erasing all of the pencil lines, go slowly, take your time. You can stop the video now. You might notice it pulls up some of ink in terms of its vibrancy, don't worry, because we are gonna be working quite a bit in these next few lessons. Adding more ink, pushing our values, blending things in, so that vibrancy will come back. So the best way to now start the blending is to make sure that we can have the full zero to nine scale in our drawing. So the easiest place to start is where we have the most of the value nine. In this case, that's gonna be my shirt. So I'm going to start in on the shirt, pushing with more squiggle lines and more dots the areas that need to get boosted to a nine. What this does is, it helps us later when we go into the face, because it will really show us where the mid darks need to be. You can do a lot of drawings where you don't have these dark darks. And you think that you're done, and then as soon as you put in one of the value nine areas, it skews the whole thing. So I always like to start by putting in the darkest darks, and it's give me a better marker of just where my value range needs to go. So as you saw from the video when we filled in the shirt, this is gonna take a little bit of time. Though not nearly as much as before. So we are going to speed things up a little bit, but you'll just work along at your own pace. Turning some of these six areas, with dots moving them up to a seven blending eight to nine, just really using the photo as a guide. Now, I'm just double checking where everything falls in the value scale. Just work along at your own pace and start to really push those values. Adding that extra layer of squiggles really start to push the values here. Since it's the black shirt, it's gonna be really dark in here. Using the squiggles instead of just the dots is gonna save us a lot of time. And after doing all the repetitive motion of the dotting, making the lines feels a lot nicer in your hand. So working to try and make that collar pop out. Working on the shadows underneath the lapels. Moving left to right again just to make sure my hand doesn't smear into ink that I've already drawn out. Especially in an area this dark, the ink can sit on top of other ink spots. So it can take a little bit longer to dry. Just kind of push the value more on the collar, make it look a little rumpled, like it has some texture to it, some value shifts. All right. So I'm just putting in the final little areas here. Looking it over one last time. Didn't take too long at all. So you can really see now how this face appears to be very, very light gray. Hardly any depth of value when you compare it to the impact of the shirt. So definitely, gonna be pushing the values as we go further now. But, you can see why it was so important to put this in here, so that it really allows us room to go further. And you can see where I said before don't worry, if you think you're going to dark in the fine details, I'm pretty sure you didn't go that dark. So anything can be fixed in pen and ink, no matter what you might think. So we're gonna move on now, and we're gonna start to push all of the values in the face in the next lesson. Doing about the same thing just really looking at the portrait, seeing where it goes, there will be a few extra things we can do in the face versus in the shirt, because it's a lighter value. [BLANK AUDIO]