The Art of Typography 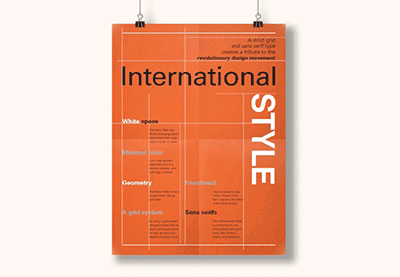 Why do typographers owe so much to just one man, back in 15th Century Germany? This lesson will explore how the Printing Revolution changed typography forever.

2.The Art of Typography: From Gutenberg to Helvetica (and everything in-between!)
5 lessons, 45:52

Hi there. Welcome to the second section of this Tuts+ course, The Art of Typography. In this section, I'm going to give you an overview of the early development of typography. Up until the mid-20th century and tackle a couple of fun projects, which are going to pick up on some of the techniques and ideas that we'll be looking at. So you may be thinking, all I want to do is work with typography now. I want to create fresh, contemporary designs that look cutting edge and modern. So why do need to know anything about the history of typography? Well, typography hasn't changed as much as you might think. Typography as it was developed back in the Renaissance period was based on many of the same rules and techniques that graphic designers use today. So let's wind back the clock and pay a visit to 15th century Germany. So around this time, there was a gold smith in Maize called Johannes Gutenberg and he had a brilliant idea. He wanted to set printed pages with mutable type, which meant that the characters could be repeated to create an infinite number of combinations. The idea of movable type wasn't completely new. A version of it had been used in China and it came to Europe via Italy in the early 15th century, but what was significant about Gutenberg's take on moveable type was that he invented a printing press to implement it. And from this, he created easy to circulate books. His most famous printed book was the Gutenberg Bible, which was printed and circulated in 1455. So why is Gutenberg's Bible still so important for typography today? Gutenberg's printing press allowed typography and typefaces to develop in the western world. The black letter type, which is favored by German printers was designed to look like a more consistent version of the style of handwriting that was popular in the region at the time. So Gutenberg and the printers who followed him were taking that first step towards establishing rules of typography that could be applied to printed type and which couldn't be applied to handwritten text all that easily beforehand. The printing revolution in Europe that followed Gutenberg's Bible meant that printing spread like wildfire and every country developed its own favorite type-styles, type-rules and typefaces. Eventually, printers moved away from Gothic type and embraced more humanistic, elegant type faces, which we now classify as being something called roman. And you'll be astonished how many of these Roman type faces are still ultra-relevant and popular with designers today. So some of the more famous examples which you might recognize might be Garamond, which is designed by Claude Garamond in France in 1530. Caslon designed by William Caslon in England in 1722. Baskerville designed by John Baskerville in England in 1757 and Fournier, which is designed by Pierre Simon Fournier Le Juene in France in the 1740s. By the 18th century, typographists were developing the first modern typefaces, which borrowed some characteristics from the older Roman styles, but had a distinctly modern look with vertical shading and non-bracketed serifs. Among these modern typefaces were Didot, which is invented by Firmin Didot in France in the late 18th century and he also invented the Didot point system, which we still use for the size of type characters today. And you might also recognize Bodoni, which was designed by Giambattista Bodoni in Parma in 1798. Cheap and widespread printing continued into the 19th and 20th centuries, which allowed the practice of topography to flourish. Along with the invention of now iconic type faces likes Times New Roman, which was invented in 1932 by the Englishman Stanley Morrison. The process of printing type advanced by leaps and bounds. Letter press printing, which was at it's peak in the first half of the 20th century and has enjoyed resurgence in popularity in very recent years was actually overtaken by more advanced offset lifeography printing in the 1950s and 1960s. So we can see that typography has had an exciting and vibrant history, which is dusted with creative individuals who wanted their type designs to reflect the times and the world that they were living in, but the important question for you to consider is this. What makes the typeface endure through the centuries? Why do we typeset the latest best-seller in Baskerville or Caslon and it still looks modern and fresh? Perhaps part of the answer lies in the fact that these typefaces have been created using the perfect balance of innovation and technical precision. Baskerville is beautiful and classic, of course. But it also looks great even now, because its tails and bowls have been painstakingly perfected and the space between the letters, which we call tracking has been expertly judged. So as legible as well as beautiful, it's functional as well as elegant and that is what makes typography a kind of odds. It make look effortless, but it requires a perfectionism and expertise to take it to that next level. In the next session, which is going to be project-based. We're going to make a little tribute to Gutenberg and his typographic successes and learn how to typeset a book spread. So stick around and I'll see you over in the next session.

Grace Fussell
Grace is a graphic designer and design writer, and heads up creative agency Blue Whippet Studio. A self-confessed 'print geek', Grace loves to share her experiences of print and graphic design with others through articles, tutorials and courses, on Envato Tuts+ and her blog, InDesignSkills.com. Visit bluewhippetstudio.com and indesignskills.com.
bluewhippet_
Continue watching with Elements
×
1,200+ courses and ebooks
Design, code, video editing, business, and much more.
Millions of creative assets
Design templates, stock videos, photos & audio, and much more.