How to Draw a Sheep

In this tutorial, you’ll learn to draw an adult sheep and a lamb, find out if all sheep have horns, and explore the distinctive appearance features that are typical for these animals. You don’t need any special knowledge of animal anatomy to complete the drawings!

Did you know that a sheep can not only recognize up to 50 other sheep faces and remember them for two years, but it also recognizes human faces? That’s truly incredible!

The sheep is a key animal in the history of farming; we can’t imagine our culture without this wonderful animal.

You may also be interested in these drawing tutorials:

You will need the following equipment to complete this project:

1. How to Draw an Adult Sheep

Let’s start with the general shape of the head; I outline it, using the HB pencil. Please be sure to leave enough space for the rest of the sheep’s body on the sheet of paper.

I add an oblong shape for the sheep’s body. Don’t overthink the process at this stage of drawing; we’ll make the refinements later.

Actually, it’s useful to see the shapes that we are drawing as something three-dimensional in their core essence. For example, the body can be presented as a shape that has a rounded foundation and a top plane.

You don’t have to draw these ovals as I did—this is just an illustration.

I add the framework of the limbs—this is a simple stylized version that captures just the main anatomical features. I use the small circles to mark the elbows, knees, and ankles of the forelimbs.

The feet have circles at the base to create an illusion that the animal is actually standing on the ground.

I add rough shapes to add some thickness to the legs, creating the bulk. We’ll refine the contours later.

I add the shapes of the ears to the head; their tips are slightly rounded.

I draw the neck. Imagine that this shape is three-dimensional; adding the subsidiary circles may help.

I also erase the lines of the limbs’ framework; they can be distracting, and we don’t need them anymore.

I draw the eyes. They are relatively small, located at a distance from each other, and have horizontal pupils.

I also add the inner openings of the ears.

Let's add the details to the bottom part of the face.

I draw the nose and the mouth; sheep have divided upper lips, which makes them different from goats. Also, they don’t have a beard (and goats do).

Depending on the breed, domestic sheep may have no horns at all, or horns in both sexes, or in males only. The horns usually are quite large and often form a lateral spiral.

Let’s assume that the sheep we are drawing is hornless, but if you are interested in drawing a sheep with horns (or a ram, which is a male sheep), we have an in-depth tutorial on drawing the horns. Just add the shapes of the horns to the top of the animal's head!

I refine the contours of the limbs, accenting the elbows and knees of the forelegs and the hocks of the hind legs. Sheep have cloven hooves and dew claws, so I add these features of the limbs’ bottom parts, too.

The foreshortening of this sheep doesn't allow us to see its hocks fully; we can add just a hint at them. In the illustration below you can observe a sheep in a side view.

I recommend paying attention to the tail of the sheep; these animals have tails that hang down. Some breeds demonstrate short tails that don't require docking (this is the name of the process when a tail is shortened); in other cases, the tail of a domestic sheep may be cut.

In the corner of the image, you’ll find a sample of the line that I used for drawing the wool. Such scrawl-like lines work perfectly and can also save you much time. 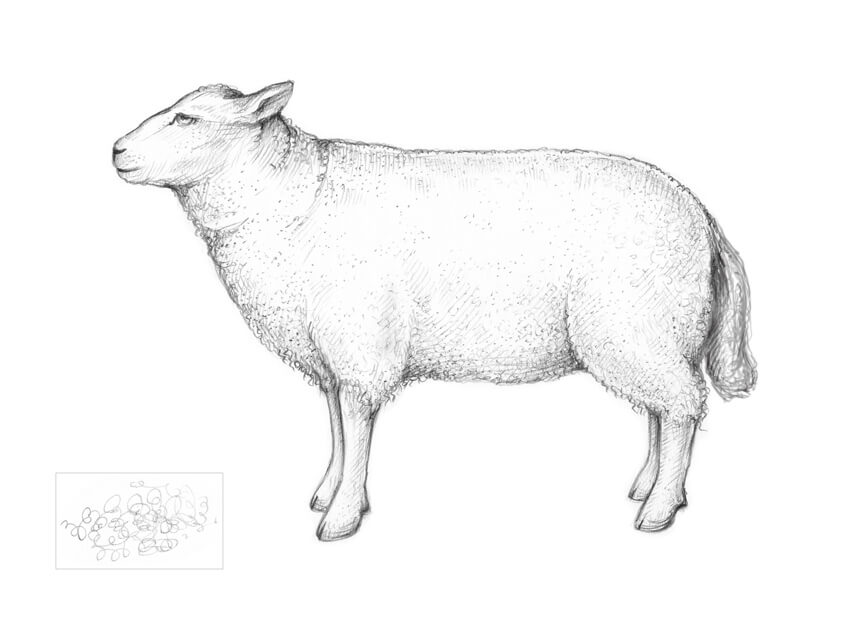 Let’s add the outer covering of the sheep’s body and refine it. I extend the contours; a sheep’s body usually creates a solid impression, partially because of a thick layer of wool, so feel free to make it really bulky.

I also add some folds in the neck area to emphasize the wool covering. Then I draw just a couple of other anatomical details: an udder and a tail.

Now we have a line sketch that actually resembles a sheep, but we can make it more realistic and interesting. With the 3B pencil, I add some graphite shading to the head of the sheep, accentuating its sides, and darken the folds of wool in the neck area.

It’s important to make the main facial features contrasting, so I emphasize the eyes, the nose, and the mouth.

I use the HB pencil to add hatches to the upper part of the sheep’s body.

If we stylize the shape of the body, the back will demonstrate a top plane—it is spotlit and should be slightly lighter than the sides of the body.

I work on the bottom part of the sheep’s body, including the limbs and tail. I darken the belly and the sides of the legs and body, using the 3B pencil.

As a finishing touch, I add soft graphite strokes to create a blurry drop shadow under the animal.

In this part of the tutorial, we'll sketch a lamb—a younger sheep. We'll also explore its distinctive features.

With the HB pencil, I draw the shape of the head; it is wider in the upper part.

I add the shapes of the ears, making them slightly asymmetrical on purpose.

I add the rough shape of the lamb’s body. It is quite small in relation to the head; this feature is common for baby animals.

I join the head and the body, drawing the cylindrical form of the neck between them.

I draw the framework of the limbs, using small circles and lines. Regarding the direction of the bones, a lamb is similar to an adult sheep, but its limbs are shorter and more slender.

I add the rough shapes of the legs’ parts. The simpler your drawing is at this stage, the better.

I draw the eyes of the lamb. The eyes of a baby animal are bigger than the eyes of an adult sheep; you can make them even bigger to add cuteness to your sketch.

I draw the nose and an open mouth; let’s imagine that this lamb is happy and wants to tell us something!

I refine the forelimbs of the lamb. They have more smoothed contour lines than the legs of an adult sheep, but the dew claws and knees should be observable.

It's also a nice idea to add a covering of short wool in the breast area.

I refine the contours of the hind legs, accentuating the dew claws and the hocks.

I extend the contours of the lamb’s body just a little bit, using a wavy line that is imitating the wool covering. I also add the tail and the marks that split the hooves.

Let’s add some graphite shading. I mark the darker areas of the drawing (the sides of the head, body, and the limbs), using the HB pencil.

I increase the contrast by adding the darker 3B pencil hatches. I make sure that the facial features of the lamb attract the viewer’s attention, and the belly and the hooves are dark enough.

A soft drop shadow is a nice addition; if you are in the mood, you can draw some grass blades or another texture.

Your Drawings Are Complete

Eugenia Hauss
Instructor
I'm absolutely in love with my work: creating artworks and teaching drawing! That’s why any hatch I put on the paper is special. I also believe that art and design are great tools to make people’s life more beautiful, conscious and happy. I’m inspired by black and white ink graphics, digital painting, the world of nature, and simple everyday things.
EugeniaHauss
Weekly email summary