How to Draw a Fish

In this tutorial, we’ll learn to draw a fish using the example of a rainbow trout. This beautiful underwater creature has a refined body shape and an amazing spotty pattern!

Fish are relatively easy to draw, which makes them a perfect choice for beginners. I’ll show you a simple way to design a typical fish; you can always add new features or change the proportions of your fish.

You may also be interested in these great articles:

To complete this project, you'll need the following equipment:

With the HB pencil, I draw the horizontal core line of the fish and mark the borders of its body.

There is no need to use a ruler; the line doesn't have to be perfectly even.

I add an elongated shape for the fish’s body. Only a quarter of the core line is left untouched—we'll draw the tail there.

I draw a trapezoid shape for the tail fin.

I join the body and the tail fin, forming the contours of the tail.

Let’s refine the head of the fish. I mark the border between the head and the main body, and then add a curved line for the gill cover.

All species of fish have different proportions; let's agree that the length of our fish's head approximately equals the length of its tail.

I draw the eye with the pupil.

I add the mouth; it is slightly open.

2. How to Draw the Fins and Head Details

In this part of the tutorial, we'll add the details to the drawing. I recommend working on your sketch gradually; it's so easy to become carried away with a single part of the drawing and lose control over the general picture.

Let’s start with the front dorsal fin; it is placed at the top of the body.

Front dorsal fins can vary in size and shape; a rainbow trout has a relatively small dorsal fin.

It would be logical to suppose that there should be a back dorsal fin, in addition to the front one. But some fish, including our trout, just don’t have any back dorsal fins.

A rainbow trout has an adipose fin instead—it is a small formation without the spikes.

I draw a pair of the ventral fins; they are located under the body, in its middle part.

I draw the pectoral fin, it is placed behind the head of the fish.

Let’s add the details of the head to our sketch. I draw the gill covers, and then add a set of smaller membranous support rays in the lower part of the head.

The details may seem overwhelming, but you don't have to make a perfect copy of a fish or overload your drawing with information. Usually, less is more—just be creative and have fun!

I also refine the shape of the mouth, adding details that emphasize its relief and three-dimensionality.

I draw the nostril on the front part of the head and a couple of folds near the eye.

A fish's head usually has many individual details; you can be creative in adding them.

I refine the shape of the fish’s body, narrowing the tail. I also change the contour of the tail fin, creating a small dent.

The fins have spikes and rays. I fill the fins’ shapes with a pattern of paired lines.

Be sure to leave enough space between each pair of lines.

I draw the rays of the tail fin, too, starting with the sides of the shape. The rays split towards the end of the fin.

Try to keep a visual rhythm—the gaps between the rays should be close in width.

3. How to Shade Your Drawing With Graphite Pencils

With the HB pencil, I darken the pupil, leaving the highlights. I also apply graphite hatching to the top of the head and emphasize the details.

I draw spots on the fish’s body, including the fins.

The spots vary in size and intensity, so the best option is to use both HB and 3B pencils to draw them. The pattern created in this manner will have a natural, realistic look.

I don’t draw spots on the belly of the fish; the thin line that goes through the center of the body is untouched, too.

With the 3B graphite pencil, I apply hatching to the upper part of the fish—it is usually much darker than the middle and the lower parts.

You can use both long horizontal lines that repeat the direction of the fish’s body and curved contour hatches. A combination of shading techniques works great for creating a realistic effect.

With the HB pencil, I cover the fish with a layer of contour hatching, just to make the drawing look harmonious.

Make sure that you emphasize the details like the gill covers and fins; the drawing should be contrasting enough.

Your Artwork Is Complete

Congratulations! You’ve created a beautiful drawing of a rainbow trout and learned more about the process of designing a typical fish.

I wish you much inspiration; just draw, experiment, and have fun! 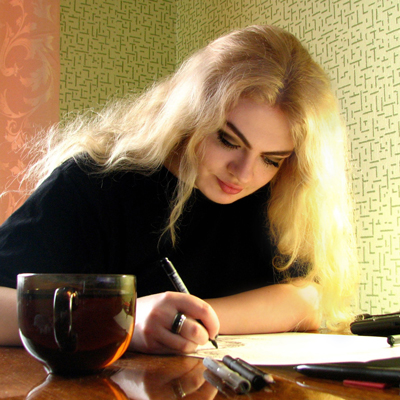 Eugenia Hauss
Instructor
I'm absolutely in love with my work: creating artworks and teaching drawing! That’s why any hatch I put on the paper is special. I also believe that art and design are great tools to make people’s life more beautiful, conscious and happy. I’m inspired by black and white ink graphics, digital painting, the world of nature, and simple everyday things.
EugeniaHauss
Weekly email summary