This is another collaboration with Toma Alin Gabriel. In this tutorial you will learn how to create a fashion advertisement poster. We'll be combining multiple images, finding the perfect stock, and unifying it with just the right colors. Let's get started!

You can view the final image preview below or view a larger version here. 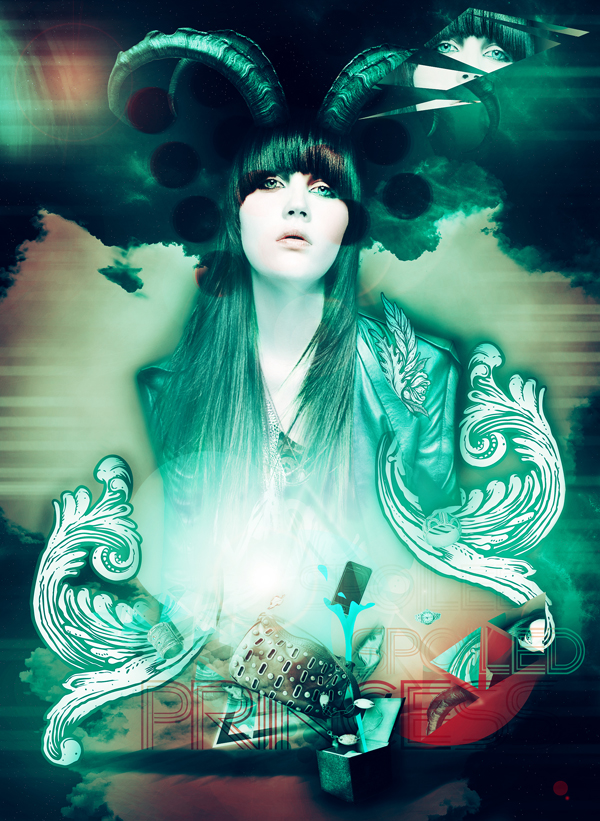 For creating this illustration you'll will need a top quality element from Go Media. Also I would like to thank all the other photographers and artists for the great images that they created: Model, Box, Horns, Bag, Bracelet, Jewelry, Watch, and Phone.

Fashion illustrations are unique and special. For this I have gathered a few great illustrations that can inspire you more: BLACC360, Pete Harrison, Bram Vanhaeren, and Alberto Seveso.

This fashion illustration requires a few stock images and the most important one is the model stock that you will eventually have to transform from that innocent woman into a devilish woman. The other elements are just a few things that represent the woman's must have objects that we created exploding out of a small box.

In the end you will have to add a few colors and some dark effects that will represent a transition between the space scene and the actual background. Then a few more color adjustments and image corrections will make this illustration just as we want it to be.

First of all create a new document. If your intention is to print this poster on a large size you might want to consider creating the document using a large size like 1900px by 2600px and 300dpi. Now fill the background with black.

Next you need to create a lighting effect over this background. To do this go to Filter > Render > Lightning Effect and use the below settings. Basically you will have to just play around with the numbers until you get some effect that satisfies you. 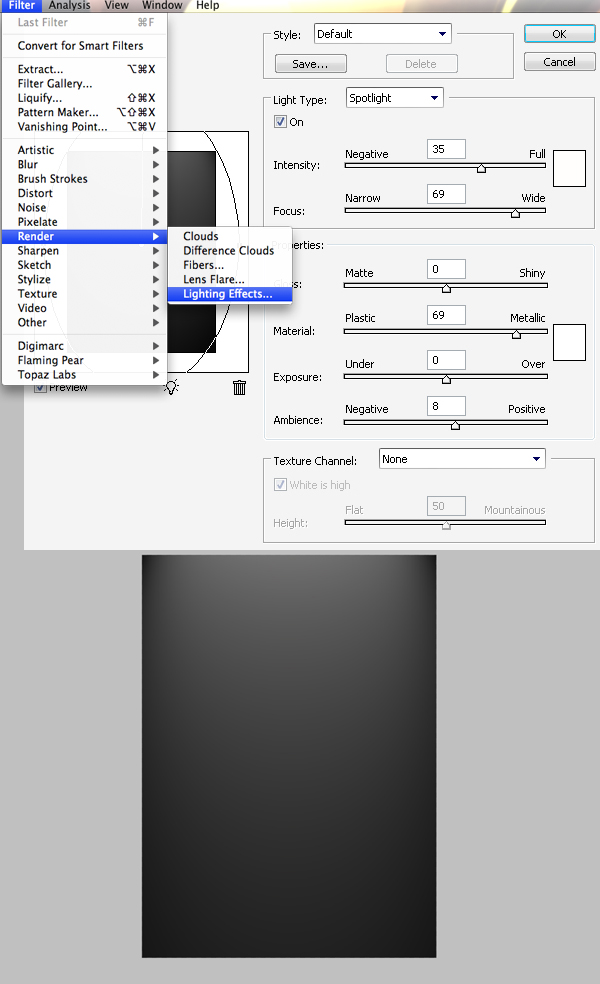 Create a new layer. In this layer you will create a few Lens Flare Effects. To do this go to Filter > Render > Lens Flare like in the image below. Then repeat the step 2 to 3 times to make the effect more powerful.

Now you need to create another layer and make sure that you have your background and foreground set to black and white then go to Filter > Render > Clouds. Then set the layer to Soft Light and Opacity to 30%. 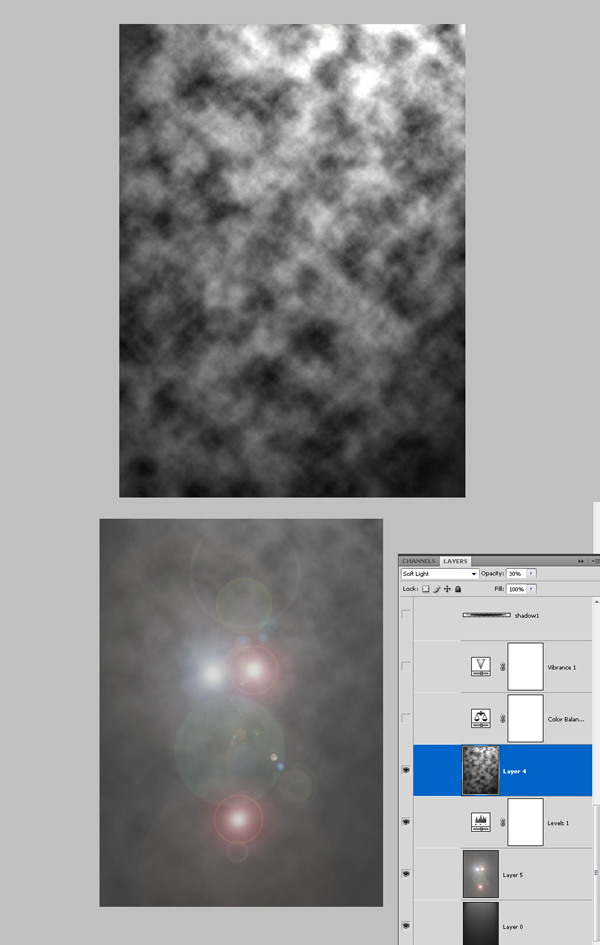 Now it's time to apply some color to your background, to do this go to the selected layer's Color Balance and use the image below for the color reference. You should obtain some sort of reddish color. Next add some Vibrancy to your background. These have all been changed from the Adjustments menu.

Import the image with the girl into Photoshop and use the Pen Tool (P) you need to extract part of her body like below and place it into your document.

Next you need to double-click the model layer to enter the Blending Options menu. In this menu you will have to add Inner Shadow, Outer Glow and Inner Glow. The images below will give you the exact information you need.

Cutting the model and placing it just like that into the background looks kind of strange, and cutting off the next effect you are going to create will not make much of a difference, but it will give the illustration a more interesting look. I am talking here about creating the interior of the model... just a piece of material that will look like the jacket she is wearing.

For this you need to make a selection like below and fill the selection with #2d343e. Now that the shape has been created, you need to make sure the layer is behind the model and double-click on it to enter the Blending Options and add the next settings.

It's time to insert the graphic elements. Start with the circle element. First create a circle using the Eclipse Tool and then multiply it obtaining a square shape like below. Merge all circles into one layer and place the layer below the "model" layer. Also you will need to set the following Blending Mode to the layer: Gradient Overlay 50% and Opacity of the layer at 50%.

Use the floral elements that you bought from GoMedia, or one of your choice, and add a few of them into the document. As you can see in the image below, they are not very detailed and cleanly placed but that is not a problem because you will come back and adding details later on as you proceed.

Time to add some colors and flares. Create a new layer over all the rest of the layers, and use a big brush size set to white to create a flare like below. Set it to 50% Opacity.

To make this more interesting you need to create three separate layers and place them into a folder named "circles." For each layer you need to create a round selection, then use the brush with different colors and sizes for each of them. Create soft color circles like below. Set the folder to Pass Through and 70%. In the end you will set it to Multiply as you will see that will make the colors more interesting and they will blend in with the rest of the composition better.

Let's add some more elements to the background. Create a new layer and place it behind the model and all the rest of the elements, but keep it above the background layer. Use the Rectangular Marquee Tool and make simple lines like in the image below and fill them all with white.

With the line layer selected you need to go to Filter > Blur > Motion Blur and apply a -90 degree Angle and a 10px Distance. Repeat the step but this time add a 0 Angle and 500 Distance.

Next pick the Eraser Tool (set to a big size and with the edges soft) and use it to erase the center and some of the edges of the lines. You will also have to reduce the Opacity of the layer and for a more interesting look duplicate the layer. Move it slightly above the other and decrease the Opacity more for both.

As you do this, you'll notice the lines starting to disappear, but at the end of this tutorial you will see in the final result that the lines will start to be very visible. That is because in time you can go back and adjust each layer to your needs or maybe apply extra layers on top of them to make them stand out.

In this step you'll start adding the elements that burst out of the box. Basically, just open up the images mentioned in the introduction of the tutorial, cut them out, and place them into your composition. One extra thing that I have done for the moment was to add a simple shadow to the box that you will eventually come back to later on, and add more effects over it and make it blend in more. 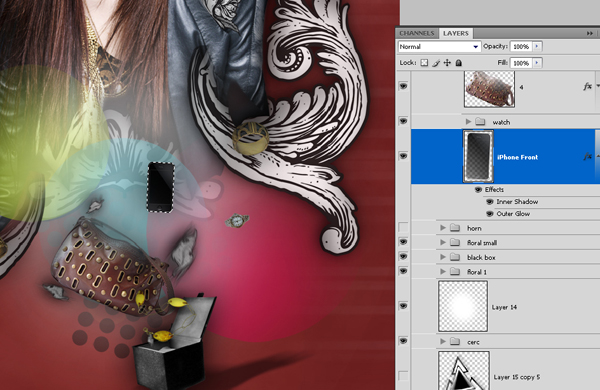 Now you will create a more interesting element. Something like the Omega Code. For this use the Pen Tool (P) and create the triangle and don't worry if the lines are not symmetrical.

For creating this exact shape you will have to make a lot of duplicates and apply Motion Blur for some of the shapes to create an illusion of movement.

Open up the horns image and cut them out of the actual image and place them into your document on top of the model's head. You will make her look like some sort of devil. In total she will have four horns on her head.

To make them look better you need to transform them into Black & White, then add a slight Inner Shadow to them.

Applying one color to the whole image and changing the mode can dramatically change the aspect of the final image. For this you need to create a Layer Fill using this color #be04af. Then set it to Screen and set the Opacity to 30%. This layer must be on top of all the rest of the layers created so far.

The second color effect is to create a new layer, then use a soft brush, just apply colors on the layer as you see below. In the end, set the layer to Screen and Opacity to 30%.

Create another layer and fill it with #01b387. Then you need to create a Lens Flare effect by going to Filter > Render > Lens Flare and use the settings below. Repeat the step 2-3 times. In the end set the layer to Overlay. 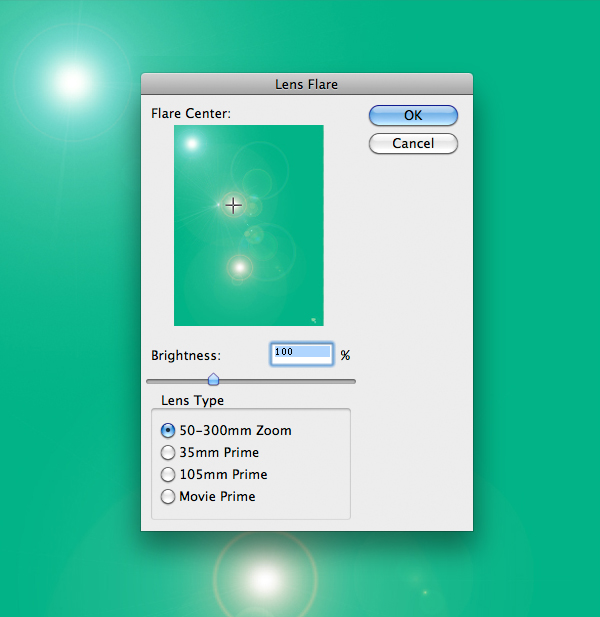 Next you need to select some areas of the model's body and using the Pen Tool (P). You need to cut off some shapes and place them into your document like below. Just add some simple graphic elements.

The composition is basically finished at this point, but to make it more interesting you will need to change some elements, add some more effects to the background, and change the blending style of the colors.

First of all return to the small dots that you have created in Step 9. You will have to duplicate that set of dots two times and change the colors to red and blue. Overlap these two sets, but move them slightly so that they are not perfectly aligned, then set them to 50% Opacity and merge them.

Next move them over the original dots set and over the model and set them to 50% Opacity and Overlay. 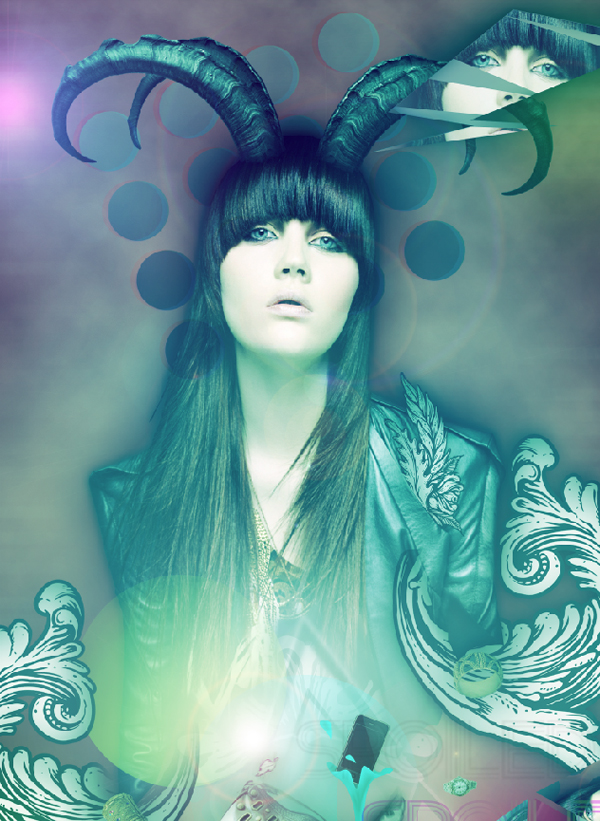 Duplicate the layer again but this time leave it to Overlay and set it to 100% Opacity.

Now you will have to use a cloud brush that you can find over the Internet or maybe in your own gallery. The ones I used can be found here: DeviantArt. Using this brush you need to mask the image leaving a very nice transition between the old background and the new black effect. 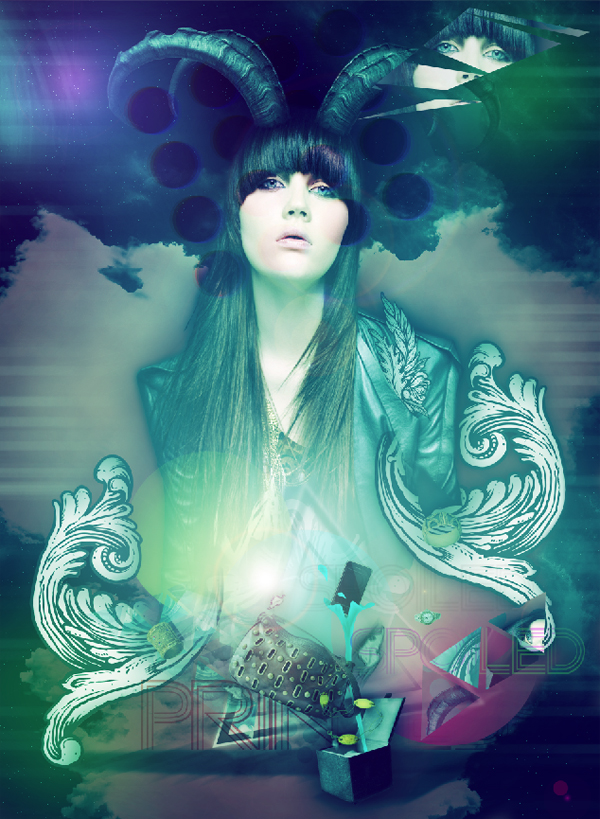 As you notice on the images there are small dots on the black element that represent the stars, these can be easily created using the Noise effect. Create a new layer and fill it with black, then go to Filter > Render > Noise. To create the noise more to your needs go to Levels, and dragging the slider left and right you will decide how many stars you want over the background.

The color effect is applied. To see it go back to the RGB Channel. 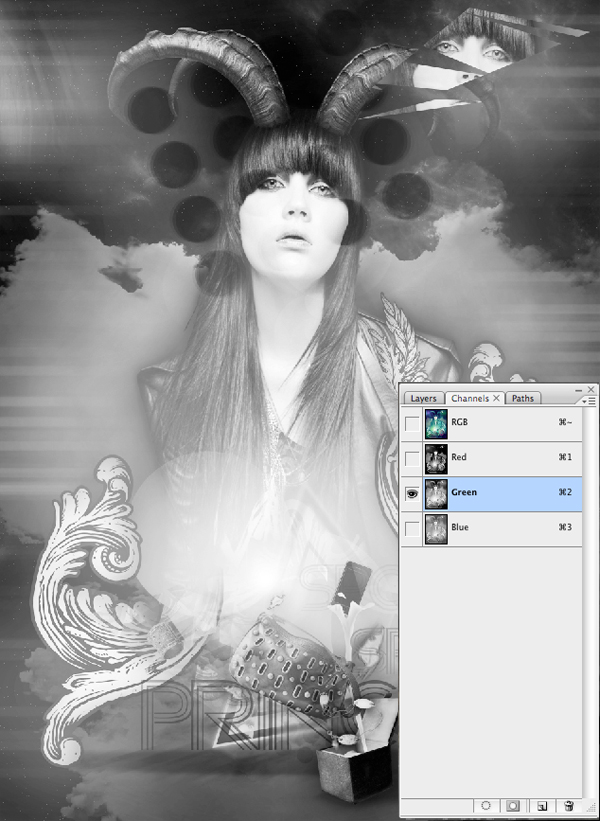 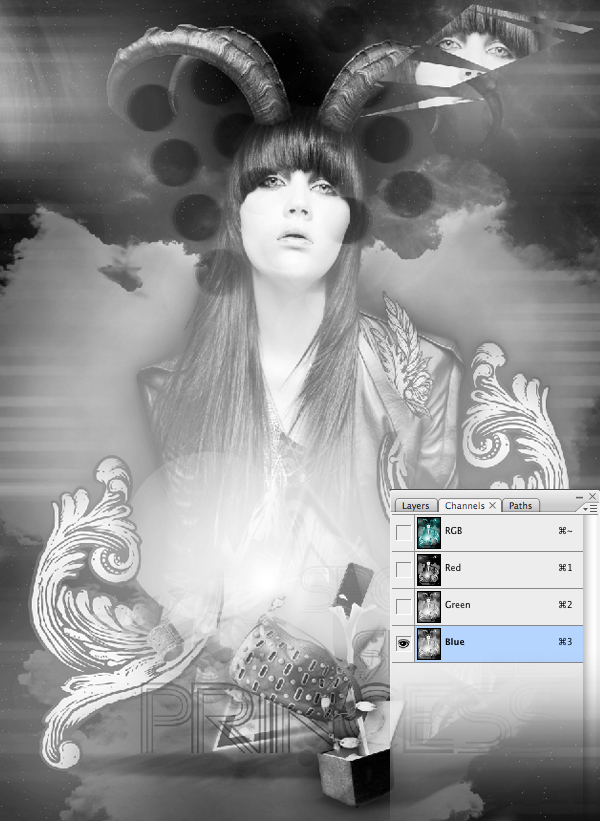 What is left is to add two more Curves Adjustments. Create the first Curve and add the next settings.

Using a black, soft brush you will need to draw over the girls face and neck in the mask to cover up the curve effect in that area, as the effect lights up the face too much.

And then apply the last Curves effect and you are done.

You can view the final image below or view a larger version here. 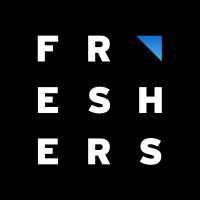 Constantin Potorac
I am a freelance designer living in Romania. I discovered the beauty of design a few years ago. Since then I have dedicated my time to becoming a great designer (work in progress)!
Weekly email summary
Subscribe below and we’ll send you a weekly email summary of all new Design & Illustration tutorials. Never miss out on learning about the next big thing.
Advertisement
Download Attachment
Translations