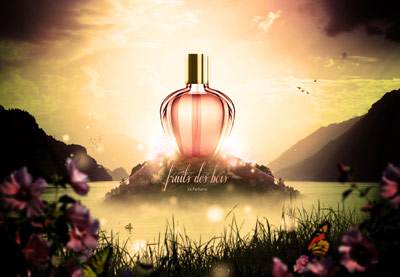 You will import and cut out the butterflies, before tweaking the levels and hue to complement the background of the composition.

Hey this is Gavin from tuts+, and in this lesson I'd like to work on the foreground of the image. So we're looking at the graphs area and forward,adding elements such as butterflies and birds to the main composition. So I'm just gonna go ahead and drag in the elements that we need, starting with this butterfly layer here. I'm just gonna drag this in, like that. Just gonna make the image smaller. Just bring it right down. Lets zoom in and open the layers panel, right click, rasterize the layer, and then lets choose the pen tool. I'm just going to navigate around this image now to cut this out. Again, same technique as before, staying slightly within the image, using the out key when needed to control the anchor points, so I'm just gonna go around as quick as I can again, it doesn't have to be perfect, especially when the image itself is going to be quite small on the canvas. So, just going around a good tip is to try and keep the nodes as close as you can. So what I might wanna do is just go back slightly. And just gonna include this flower in the image. So, I want to keep that in. Around the integration between the flower and the butterfly. So, let's keep that in there. Again this is quite rough, but it's fine for the purpose. Go around, and back. Okay, this is caught under the wing. Remember keep the nodes nice and tight if you want to speed up your work flow. All the way around and back to the central point. Just going to right-click. Make a selection. Cmd or Ctrl + J to create a new layout. Let's hide that, and let's close that down. Back to this selection tool, and let's put this butterfly somewhere here. Like that, let's zoom out slightly. Right, let's leave it here, let's just press L and let's just bring down the tone, let's bring down the minutes, bring it right down. Bring it right down there. And, I'm going to do two things. I'm gonna blur out the butterfly, and I'm gonna blur out the grass. So, we're gonna use a Gaussian Blur and a radius of about 4, 4 is good. Okay, and let's go back to the layers panel and we can delete this layer now. Let's call this Butter. Fly on one, and let's delete this perfume bottle layer as well, let's scroll down to the grass layer, and I'm going to add assembler to that as well, but only a slight blur so I'm going to add maybe 1.4, 1.5. 1.3. Actually we've got 1.3 for now. Which is good, don't want too much blur but that's good for now. And I'm going to go ahead and in fact, I'm just gonna. Bring down the saturation on the grass lightly. And I'm not adding in just one layer here, I'm just doing it on the actual grass layer to see how it looks. Take out some of the green, which is fine. Now, what I need to do is bring in the other butterfly image. Let's drag that across, and let's bring it up to the top. Let's drag that down. Okay, let's right click, rasteurize the layout. Okay, so let's zoom in slightly, and let's do the same procedure again with the pen tool. I'm just gonna navigate around as quick as I can. Again there are other ways of doing this but find that there's a lot of tweaking involved, if we used the magic wand or the focus area tool. It doesn't always work 100%, especially on the fine details. So I tend to just use the pen tool. I'm not gonna include the tentacles. I'm going to cut them out because it's going to go to a dark background, so you wouldn't see it anyway. Let's just around as quickly as possible, around there, like that. Again, I'm just dotting around the image. Makes it a lot easier. When there's no need for 100% accuracy. Let's zoom back out, in fact let's zoom back in. And let's just add another path just here to get rid of that green, just here. So what we need to do now, if we hold down that a tool, and select all the parts that we created rather than the single. Press p, make a selection you'll see then we've got all the areas that I've preselected there, and let's press command or control J, hide that layer, see how it looks, looking good, let's bring it down to about there, and let's put that butterfly round about here. Maybe there. Right, so let's give it a blur, Gaussian blur. Let's bring it up to about three. And let's add some depth to it. Let's bring the meter right down to about there, which is good. So we've added a couple of foreground elements. In our next lesson, I'm going to add birds to this sky, and a couple more elements surrounding the mountain, possibly before we finish up with our adjustment layers and our text. 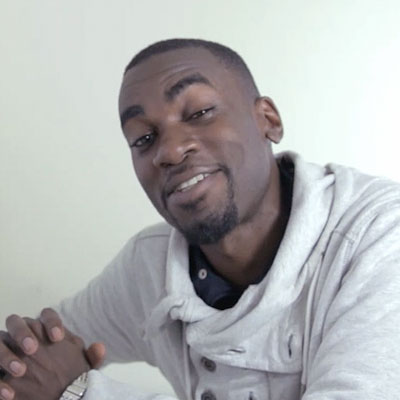