Six Things I Think About When I'm Mutating a Rabbit

Hi, I'm Chris and I'm addicted to creating bizarre characters. I've got a real soft spot for strange and surreal beasts, hybridized creatures, and mutated animals. Some people might call what I do "random," but there's actually a good deal of thought and sometimes even planning that goes into designing the characters that end up in my artwork. Let's take a peek inside my twisted character design methodology.

This Post is Day 5 of our Character Illustration Session. Creative Sessions

In this article, I'm going to design various rabbit characters in an attempt to highlight a few of my methods for coming up with bizarre characters, some things I think about when I'm building a creature and a few tips for jump-starting your imagination. Oh, and for you PETA types out there, no rabbits or bunnies were harmed in the making of this article.

When it comes to character design, my approach varies greatly depending on the project and how much time I've spent conceptualizing the character or characters before I start drawing. Sometimes I ruminate on an idea for hours or over the course of days, sort of thinking through the concept while I exercise or perform daily mundane tasks, letting it organically come to life. Other times, an idea will just pop into my head and I have to get it down on paper as soon as possible so I don't forget it. And when a client needs something, I often have to force myself through the creative process, thinking through the design of the character in a much more structured, regimented way.

Is there a right or wrong approach? Absolutely not. The correct approach is the one that works for you and, in the case of commercial art, the approach that works for your client. Some people thrive on planning and structure, whereas others favor a freer, more improvisational approach. I have a tendency to fall somewhere in the middle of that continuum, and I've often described my common approach as slow improvisation.

Popping Some Ideas Out

When I'm working on projects that don't require a detailed sketch, I tend to spend very little time on the sketches. I use them for getting basic concepts and forms onto paper. For the most part, ideas you think you've fully conceptualized, or drawn in your head, aren't really fully-formed. Your brain fills in a lot of blanks, and when you start drawing, you'll more than likely notice that the ideas you thought were pretty concrete have altered slightly or even dramatically.

Getting ideas onto paper or digitally sketching them is really, really helpful, especially when you're planning a piece. Obviously if you're creating something on the fly or doodling, this doesn't really apply. For me, even if my initial sketch is total crap (which it usually is!), it still sets me in the right direction, moving me closer to what I want to create. Here are several rabbits I quickly sketched in order to get some ideas out of my head and onto paper: 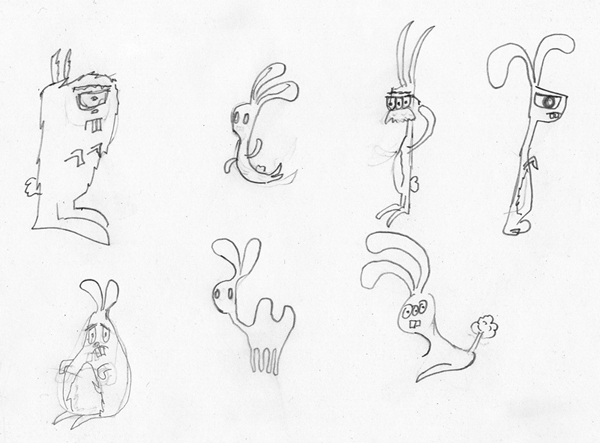 See. I told you. They're pretty rough, but that's OK, since I'm going to refine them immensely using my toolset of choice, Adobe Illustrator.

Angles and Curves: Working Out the Feel of the Character

Sometimes simple tweaks can alter the entire feel of a character. Take, for instance, the skinny, angry-looking cyclops rabbit I sketched above. What if I take that character and use mostly angles to draw it? On the other hand, what if I make it mostly from curved lines? Here's an example of what these two rabbits could look like: 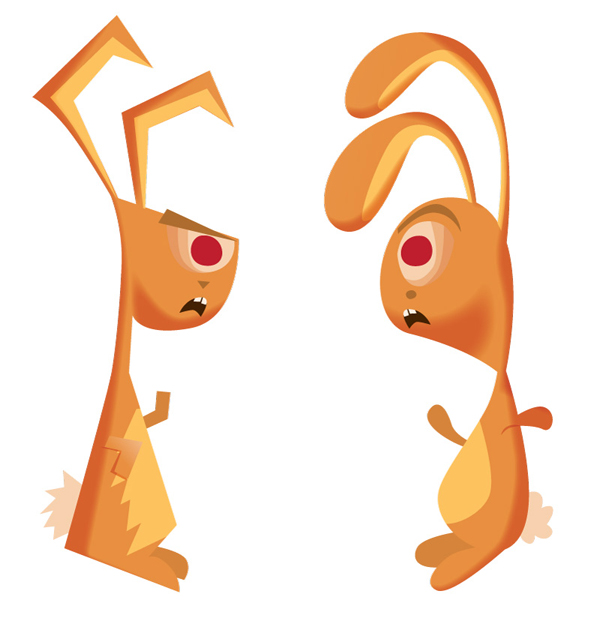 OK, they're both strange, but the sharper, more angular one is a bit more energized, angry, masculine, and aggressive, whereas the curvier one feels a little more gentle and approachable. Sure, the facial expressions amplify the contrast, but angles generally come off a bit colder and more threatening and curves come off a bit warmer and friendlier.

A really easy way to make a character look really bizarre, really quickly, is to exaggerate certain aspects of their appearance. For reference: 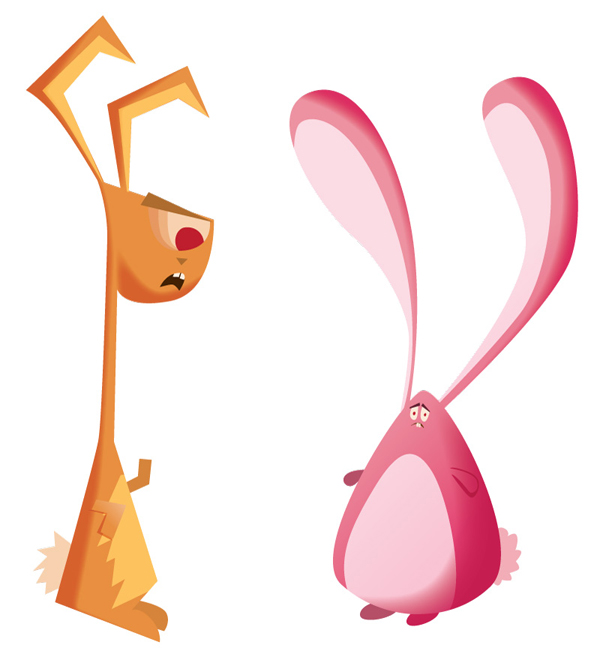 So what I did was fairly simple. I took angry cyclops bunny and stretched his neck out. Now he's got a reason to be angry. Also, I took the fat, messy, lumpy rabbit from my idea sketch and exaggerated him, giving him a tiny face and huge ears. Simple changes, but they dramatically move the rabbits away from the real and into the surreal. Exaggeration may be one of the easiest and most fun ways to oddify your characters.

It's a great way to unleash your creativity and when you're stuck, it can really help ignite your imagination. A word of caution, however. If you still want your animal to be recognizable as a specific animal, make sure you leave enough visual cues intact or you may leave your audience guessing or confused (which might not be a bad thing, if that's your intent!). In this case, I think these are still very easily recognizable as rabbits. If you really want to go crazy, start twisting and contorting the forms and see what happens!

Messing with Placement and Dimension

Another sure-fire way to make things a bit more bizarre is to change the placement of items like facial features. Tons of artists have done this and it was especially popular in the wake of cubism and modernism in the mid 20th century. Mixing flattened objects with shaded, three-dimensional parts can also create some great effects. For this exercise, I'll use the beefy-looking cyclops rabbit in the initial sketch, but I'll add a second eye and mess with his looks a bit. Let's take a look: 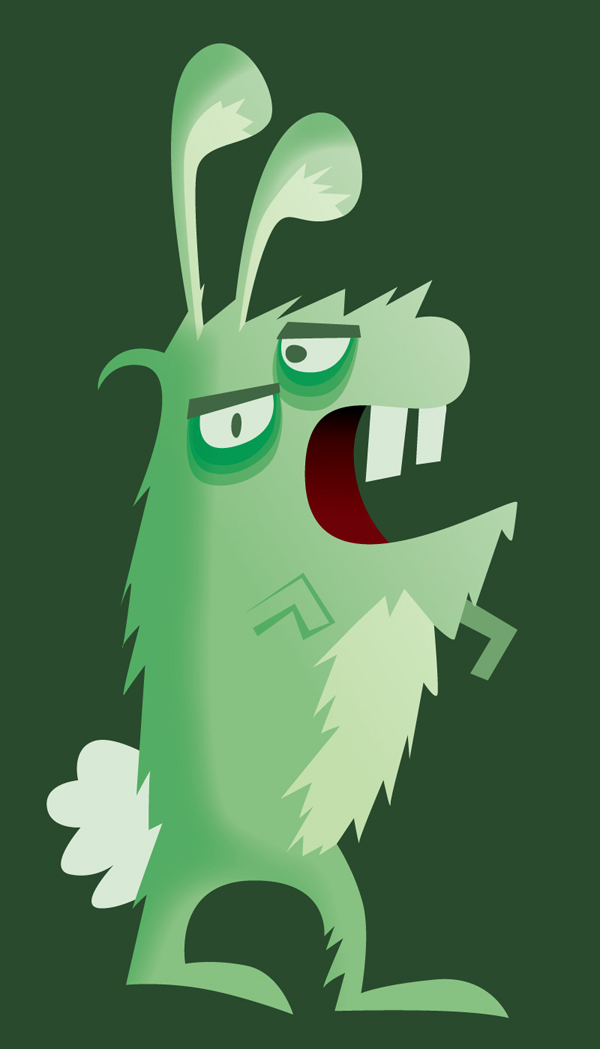 Ah, yes, a face only a mother could love. This is by far the most twisted and un-rabbit-like bunny yet to grace this article, but he really does get the point across, doesn't he? Both eyes share a side of the face and the legs also seem to share the same dimensional plane.

One of my favorite ways to make a character stranger is to add or remove body parts. Adding body parts is a pretty obvious and often-used technique that can be used to convey a wide variety of messages, but I tend to use it to add humor and absurdity. In order to show what I mean, I've taken the triple-eyed, mustachioed bunny from the first sketch and added in a couple extra arms. One bonus eye + two extra arms + a mustache = awesome!

Subtracting body parts can be equally effective, if not more, and personally, I don't think it's used as often as adding parts is. I like to deliberately remove body parts for specific reasons, usually spark questions as to why the parts might be absent. Here's an example of body parts in absentia, using the falling rabbit from the original idea sketch: 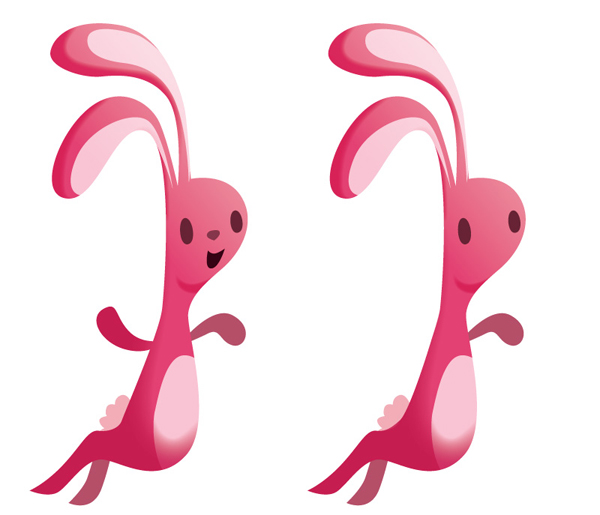 The rabbit on the left looks pretty normal and happy, which is great, but by simply removing the mouth, nose, and arm, the rabbit on the right adds an air of strange mystery. Sometimes I only draw in the body parts that are absolutely necessary to convey the message or feeling I want to get across. In this case, the rabbit on the right has only one hand, which is weakly reaching as he falls, leaps, or flies. Removing or leaving out the other arm helps draw extra attention to the remaining limb and presents the viewer with a more unique situation and some questions.

Yet another one of my favorite techniques is creating hybrids. Mixing two different animals, an animal with plants, or animals with inorganic objects or landscape elements is so much fun and it yields powerfully absurd results. A while back, I was drawing a desert scene and I came up with the idea of a rabbit-camel hybrid. I ended up liking it so much that I eventually created an entire piece based on that character. Here's the original, snipped from a piece I created in early 2009 called "Expedition": 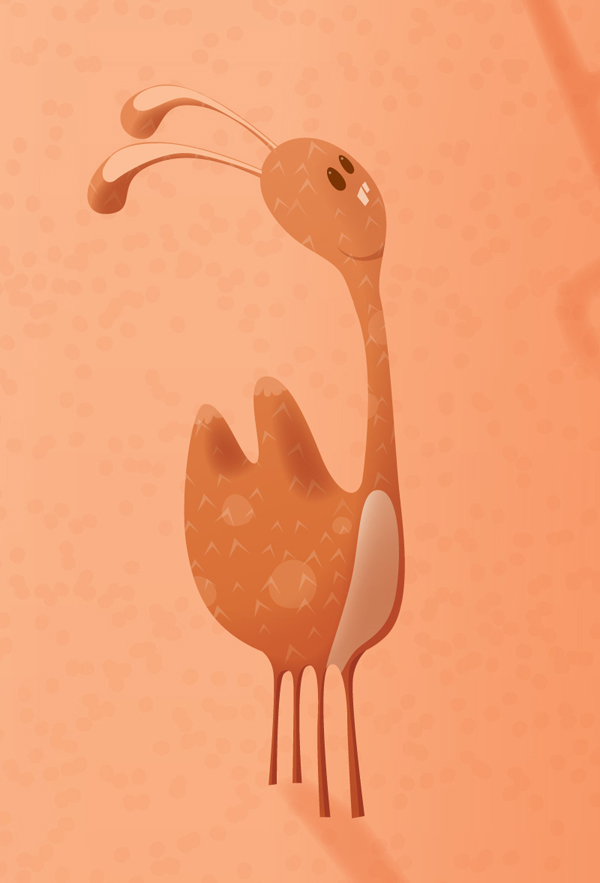 And here's the subsequent reworking of the character in its dedicated piece, "The Thicket": 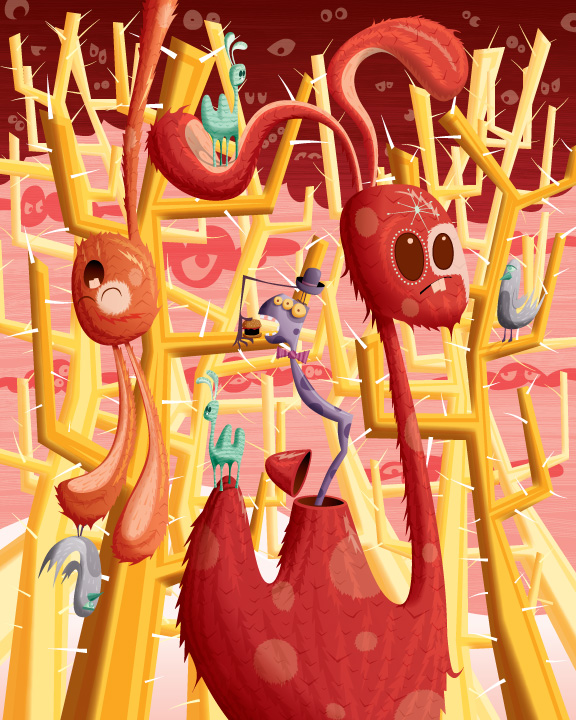 In the initial piece, "Expedition," I created the character as more of a bit player than a focal point, so I didn't really spend a lot of time refining it. It's not readily apparent, in my opinion, that it's any bit a rabbit. In "The Thicket," I sort of meditated on the concept of that particular character, creating various versions of the same initial notion. This gave me an opportunity to really hunker down, build upon, and refine the original hybrid idea and make it even stranger, and I think, more compelling.

By placing the smaller camel-rabbits on the bigger one, the larger one became sort of a landscape element. I liked the idea of letting the humps become mountains and even popped the top of one in order to add a whole other layer of absurdity. Honestly, my initial intent with this piece was to create a very quick character study, but I had so much fun with it that I decided to put more time into it, and really work on the characters and the scene. It ended up being a favorite piece of mine. I feel really good about the characters and how they turned out.

When you're anthropomorphizing an animal, you're making it more like a human, so why not add in some human elements? Personal favorites of mine include hats and mustaches (I think my weak spot for mustaches is pretty well documented!), but there are so many things you can add, depending on your personal tastes and what you're going for with your character.

You probably already noticed that I gave the brainy triclops rabbit above a mustache and glasses. It really adds to the feel of the character. For my final example, I'm going to use another finished piece of mine called "At the Break of Day." I was really happy with the way the characters turned out in this one. The rabbits are more monstrous than human, but I really tried hard to give the owl characters a definite human quality. I did this with their poses, their employment of tools (the megaphone), and the eyepatch. Gotta love those eyepatches. 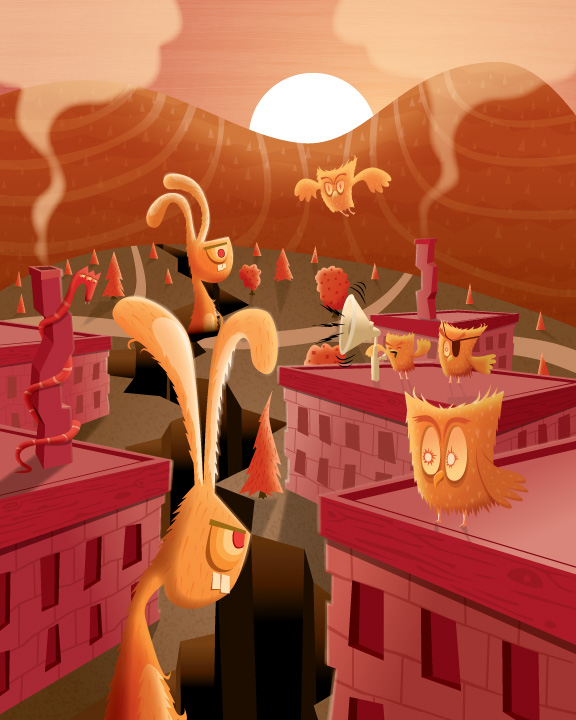 To Wrap Things Up

There's so much more that goes into designing characters and a huge part of what makes a character compelling is your personal style. Obviously humor, playfulness, and absurdity play a large role in my work. Plenty of people create strange and surreal work that comes from a different perspective visually and thematically.

Having a goal in mind, beyond simply creating a character for the sake of creating a character, can help tremendously when you're thinking things through. Also, mixing several, or all of the methods listed above, is a terrific recipe for creating something really unique. Have fun mashing together strange characters, or, if you're the dark and moody type, mope your way to a twisted creation.

Chris Leavens
Chris produces most of his artwork -- from start to finish -- entirely in Illustrator, including textural elements. His work incorporates absurdity, anthropomorphism, and a healthy dose of humor.