Cartoon characters are everywhere, from advertising to film, and the ones that stand the test of time all share something in common. They have substance over style. It's all well and good designing innovative, cool looking characters, but if they're only skin-deep, that's where they'll come unstuck. Great characters like 'SpongeBob Square Pants' have much more than just a unique look, they have several key elements that are instilled in the very core of their design. Over the course of this article, I'll show you what they are and how to use them to create your own lovable characters.

This Post is Day 6 of our Character Illustration Session. Creative Sessions

In my opinion the key elements to creating irreverent, lovable characters are: Back Story, Character Traits, Audience, and last but not least, a design that draws from these. This is a holistic approach, where all elements work in tune and feed off each other, there is no rigid formula and so you can tailor the process to suit you or your brief.

We'll start where all good work should, in the sketchbook. In my opinion, a sketchbook makes for the best sounding board. In it, you can push ideas around, be as scruffy and as half-baked as you like. It's also the best place to gather inspiration. Many people take inspiration from observing real life, i.e. animals or people; this is called 'Reportage'.

Getting out and seeing the characters that surround us in everyday life, at the coffee shop, in the park, etc gives you a wealth of source material. I also get inspiration from watching films and listening to music. Wherever you position yourself, make sure you have pencil and paper in hand! I believe starting work on a computer makes for a sterile and antiseptic work environment - your characters need life so they should at least start off in the real world.

When you're sketching it's often the happy accidents that lead to a great character - go with it, don't filter or constrain yourself. Also, never tear out pages when things go a bit wrong. It may be very natural to want to cover things up, tidy and smarten up your sketchbook, but it's always good to reflect on your mistakes in order to learn. I've known people to glue pages together to cover up, what they deem to be, a mistake, but there's no need. A sketchbook is for you and your eyes only, it's your workings out and they're very valuable. 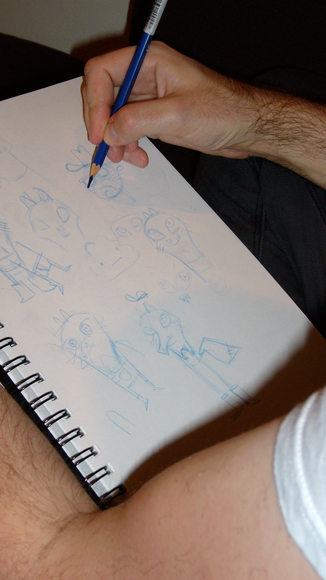 In most cases your character, like all illustration, has a job of work, and an audience it needs to speak to. You may be asking why I didn't start off with this, and go to work in the sketchbook with the audience in mind. I think it's important to get going with character design before a brief comes in or you're roped in by the confines of any rules. If your creative juices are already flowing, you'll find it much easier to apply yourself to a brief.

Designing for an audience means getting into your audiences head. If your creating a character to appeal to an age bracket of six to nine year old boys, you must first know what your typical six to nine year old boy is interested in, the sorts of things that make them laugh, the sorts of toys/food they like, etc. This information then feeds into your character to make it endearing and identifiable.

Good questions to ask yourself while you think are:

Then start thinking about character traits.

These are your identifiers - building blocks for your character, all the eccentricities, and things that make them unique. It can be literally what they are i.e. type of animal or it could be the clothes they wear, the food they eat and their personality traits, i.e. confident, irritating, etc. They need to permeate your design, because you're not putting a script in front of your audience, these traits need to be visual and visible. Use stereotypes, a particular thing's inherent characteristics as a tool.

If your character is bad tempered, consider them as a grumpy old man, or an ostrich. There's nothing wrong with stereotypes in my opinion, but be clever with them. If you want to draw attention and emphasize a particular trait, its a good idea to make it more prominent, bigger/brighter colored, and in contrast reduce its equivalent opposite to create a striking juxtaposition. For instance my character has small arms so in contrast he has really long legs.

This moves us on nicely to the Back Story. If you were a person that's had a bad experience in the past, it would shape the person you are today. By the same token, if your character (e.g.) of an elderly goose was a substitute carrier pigeon in World War II, he may have aversion to loud noises, and often recount of his heraldry and major role in winning the war. It's this history, good or bad experiences, which makes your character come to life, goes towards its aesthetics and feeds back to answer some of the questions we asked in the Audience section. 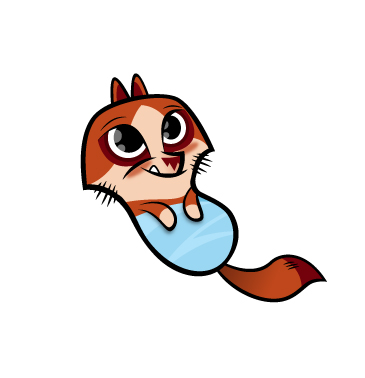 Here's my example character, 'Stubby Arms Fox.' He represents the application of all our elements. 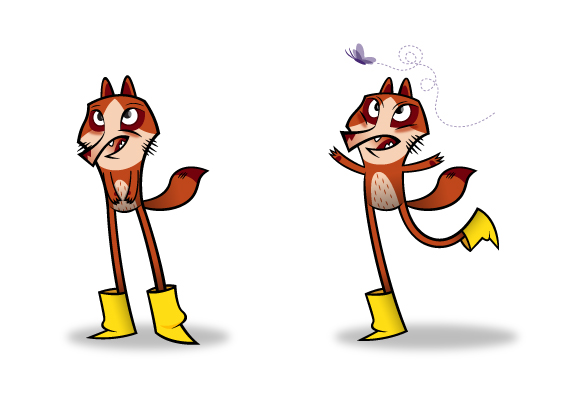 I've given him these character traits and back-story:

"A fox born with short stubby arms and in contrast very long legs. He has always thought his little arms were more like wings and he longs to be a butterfly and to be able to fly. He's quite timid, but determined and high spirited. He loves his big yellow Wellies, which he thinks are great for adventures and exploring."

So hopefully this overview has given you some insight into the process of creating a great character design. By nature this is an organic and individual process, I designed this holistic method to give you just some pointers and maybe change the way you approach character design. Take it, expand upon it and really invest in your characters.

TechniquesTheoryVector
Did you find this post useful?
Yes No
Would you like to provide feedback (optional)?
Cancel Submit
Want a weekly email summary?
Subscribe below and we’ll send you a weekly email summary of all new Design & Illustration tutorials. Never miss out on learning about the next big thing.
Sign up

Ben Mounsey
green glasses, aka: Ben Mounsey, lives in London, working freelance in both the animation and illustration industries, his work varies from print media to design for animation. His client list includes the likes of Cartoon Network, Nickelodeon and ITV, with his work shown on Cbeebies, and published in Computer Arts Magazine and numerous children's books. Showcased in his work is a love of 50's retro, humour and big characters...and hats. You can find out more, and see his work, at: greenglasses.co.uk