Quick Tip: How to Create a Tangled Text Effect

Follow this quick tip and learn how to create a simple tangled text effect using Art brushes and Opacity masks in Illustrator. We will use two paths but the same techniques can be applied for three or even more. Let's begin!

No need to expand the text because we won't use it, just lock it. Now, take the Pen Tool (P) and start to trace the letters as shown in the image below. You don't have to be very precise. 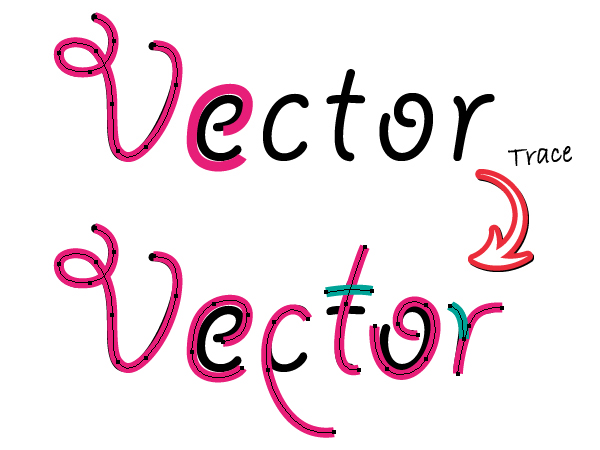 Next it's time to distort the letters a bit. As an example take a look at the letter "V". Use the Direct Selection Tool (A) to select only one anchor point from those indicated and drag the handles as shown. Continue with the other points and you will obtain the wavy look.

Do the same thing for the rest of the letters and at this point the letters should look like the image below.

Now we will continue with the second row of paths that we need for this tangled effect. Take as an example the letter "C". Grab the Pen Tool (P) and start from one end to draw the purple wavy path as shown. It's important to follow the curves of the pink path made earlier and to follow the sequence: left-right-left-right and so on. Never twice on one side!!

Once the letter "C" is ready, continue with the others in the same way. 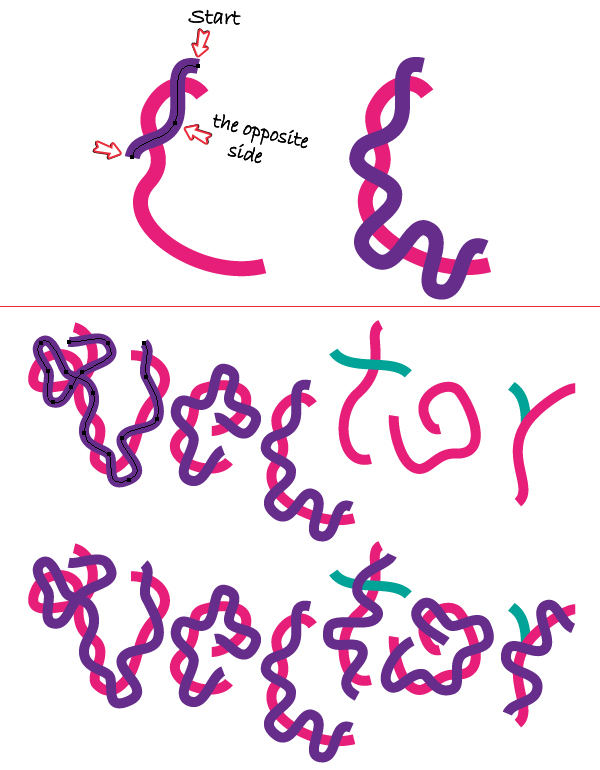 Next, go here and download the Round Any Corner script. After this you should find the script in the File menu under Scripts. Select all three shapes, go to File menu, run the script and select a 5 Radius.

Note: Instead of the script you can use the Round Corners effect just make sure you select Expand Appearance afterwards or use directly the Rounded Rectangle Tool if you want.

Select the smallest shape then go to Object menu > Path and choose Add Anchor Points twice. Use the Direct Selection Tool (A) to select the resulting four points and move them using the Up and Down Arrow keys on your keyboard as shown. 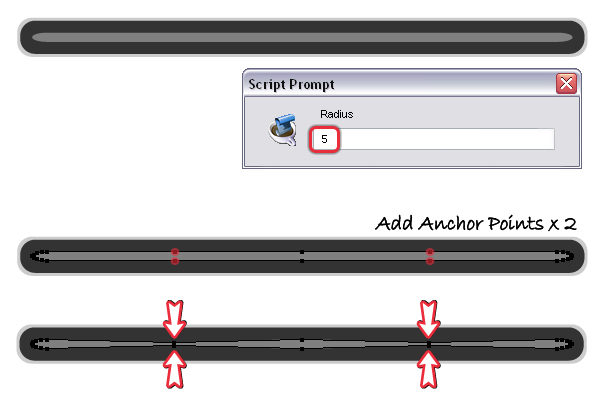 Let's go back to the letters. Select the paths and stroke them all with the new Art brush. Because we changed the colorization method we can now select any stroke color. The ones that I've used are listed below. 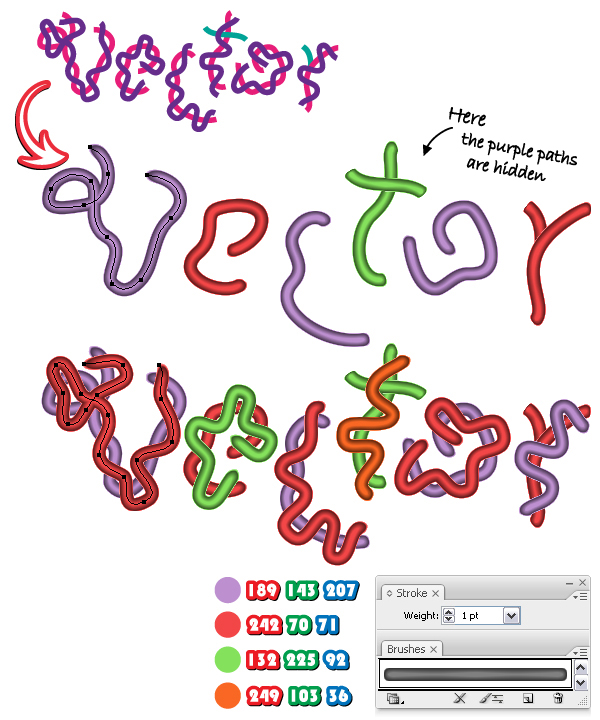 Before we go further, take a closer look at your letters and make sure that the brush strokes do not overlap. Check all the paths and move the anchor points to adjust the curves if needed as shown below.

Now focus on the letter "o" and having both paths selected, go to Object menu and choose Expand Appearance. As a result of this action instead of the red brush stroke you will get a group containing a lot of shapes (from the smooth blend). In the Layers Panel open this group and go all the way to the end. Select the last shape from the group (which is the bigger shape), Copy and Paste it in front then drag it out of the group. Do the same thing for the purple group and at this point you should have the two shapes in front.

Select these two shapes and click Divide from the Pathfinder Panel then Ungroup from the Object menu. Now, focus on the route indicated and especially on the shapes where the two paths are intersecting. You have to decide which ones will be visible and which not. Use the Direct Selection Tool (A) to select the first "intersection-shape" and fill it with white then the next with black, white again, black and so on. When you are done, select only these white and black shapes and group them. Delete all the others (light purple) because you don't need them. 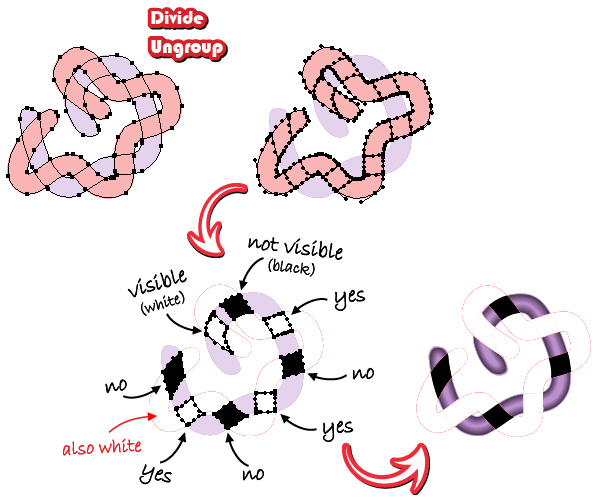 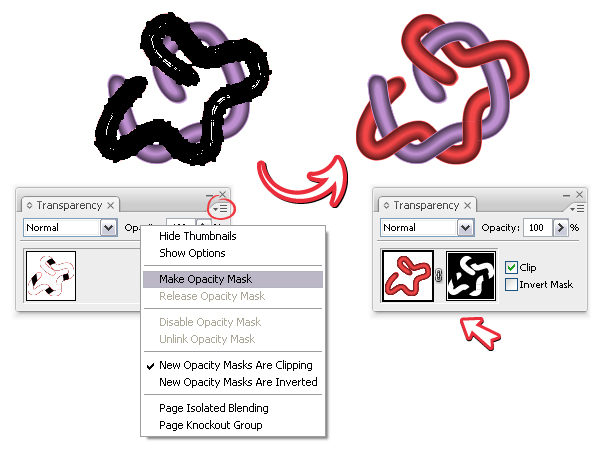 Let's take another example because things are a little more complicated for the letter "V". First of all, take the Scissors Tool (C) and click on the anchor point indicated to cut the red path because that area is too crowded. Select everything and choose Expand Appearance from the Object menu. From here the process is the same. Copy and Paste in front the bigger shapes (the last ones) from the resulting groups as you did at step 7 then select them both and click Divide from the Pathfinder Panel and Ungroup from the Object menu. Focus on the route indicated and fill the shapes with white (which you want to be visible) and black (which will not be visible). When you are done, group them and delete the rest of the shapes (light purple).

Select the group that contains the white and black shapes and also the red group from underneath and choose Make Opacity Mask from the Transparency Panel. 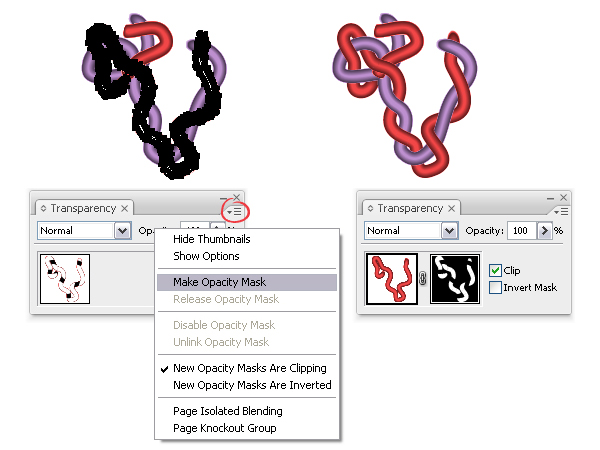 Now let's take care of the smaller red group. First, Copy and Paste in front the two bigger shapes as you did before. Having them both selected, click Divide then ungroup them. Fill the resulting shapes with white and black as shown below, group them and delete the ones that you don't need. Select the group containing the white and black shapes and also the red group from underneath and choose Make Opacity Mask. The letter "V" is ready.

Follow the same techniques and continue with the rest of the letters. In the next image you can see the important steps for the letters "e" and "c":

And in the image below for the letters "t" and "r":

At this point the letters should look like this:

Take the Ellipse Tool (L) and draw a 110 x 5 px flat oval then select using the Direct Selection Tool (A) only the right anchor point and press the Convert selected anchor points to corner option. Next, select the left point and drag the handles to distort the shape as shown. Go to Object menu > Path > Offset Path and apply a -2 px Offset value then move the resulting shape in the middle.

Next, take the Pen Tool (P) and draw the short paths on top of the letters as in the image below. Stroke all these paths with the Art brush defined at the previous step and change the Blending mode to Overlay. Depending on how glossy you want the letters to be, set the Opacity values for these short paths to 50, 60, 70 or even 100%.

At this point the text effect is ready. Optional you can add some shadows. First, group the two paths that make up a letter (without the highlights) then go to Effect menu > Stylize and apply the Drop Shadow effect. Do the same thing for the other letters.

The tangled text effect is ready and here is the final image. If you feel more adventurous you can create this text effect using three paths or even more because the process remains the same. You will only need more time and attention.