Placing masked glassware on a new background can be a difficult task. Either the glass looks too transparent, with bits of the old background showing, or it lacks highlights, or shadows. The techniques covered in this tutorial are not limited to Octoberfest beer mugs. You can use these practical techniques for any type of glassware in composite Photoshop images.

We start with a picture of myself holding a beer mug and a photograph of the Octoberfest scene. The picture was a snapshot I shot while I was visiting Munich during Octoberfest. Download the images to get started: Octoberfest image and Beer image. The crowd image has been blurred. This does two things: it fakes a depth of field and it protects the identity of the passersby. 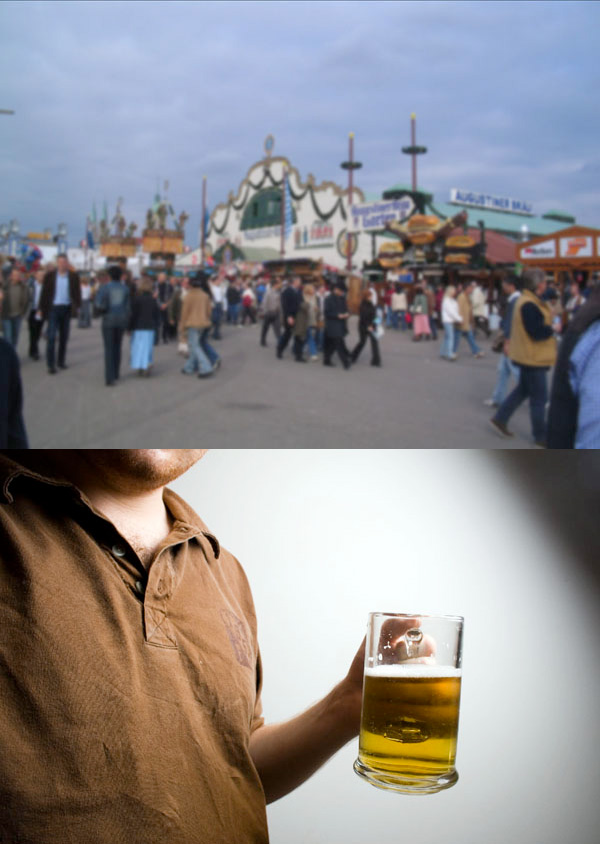 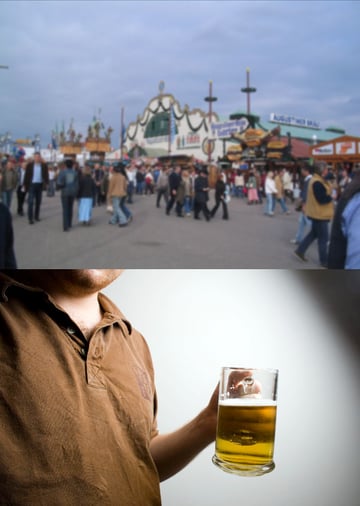 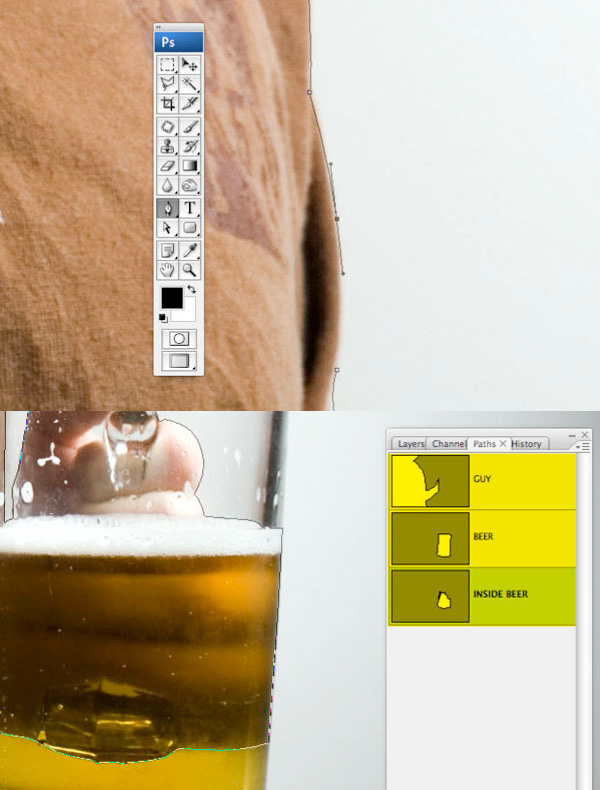 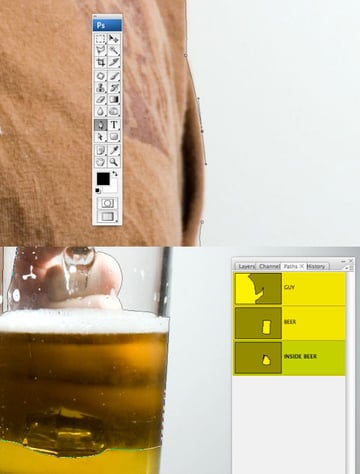 Right-click on the path and select Make Selection. You will get prompted by a dialog box; make sure it's set to 1 pixel, Anti-Aliased checked, and Operation New Selection is checked. Once you press OK, it will make a nice crisp selection. Right-click the original background and press Command + J to make a new layer out of the selection. Do that with the person, the beer, and the behind-the-beer path.

You should have four layers in your document: the beer layer should be on top, the inside beer should be next, the person should be afterwards, and then the original picture in the background. You can delete the background layer if you want to, or hide it.

Now it's time to place the Octoberfest picture behind the person. One thing that becomes obvious is that the beer mug isn't transparent. It still has the old background on it. 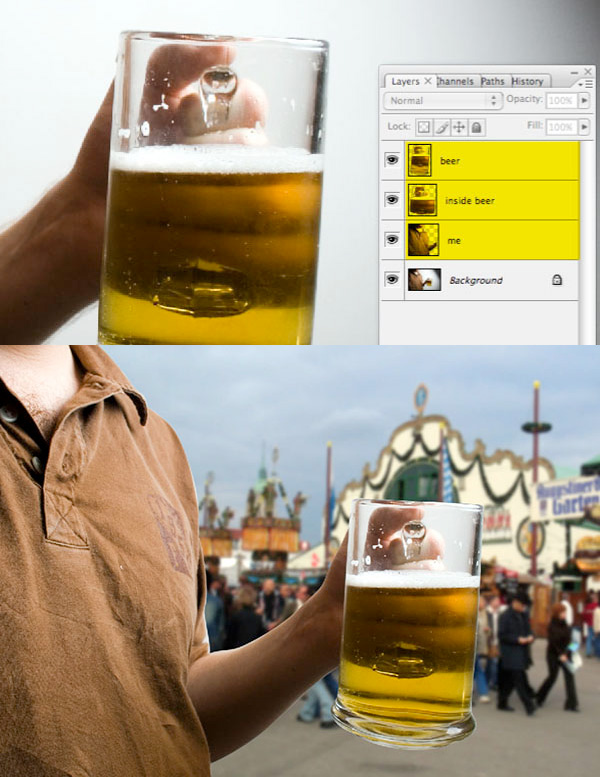 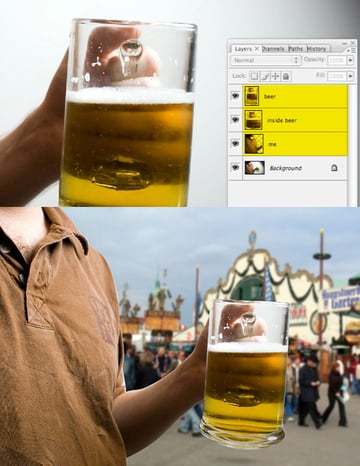 The trick of making it look realistic is to make two beer mug layers. One is for the shadows only, and the other is for the highlights only. Set the Blend Mode on the top beer to Multiply and the bottom beer to Screen. At the moment, the composite image still looks too dense, but the secret is in the next step.

With the beer multiply layer selected, click the Blending Options dialog box. You should have the Layer Style menu box open. On the bottom you should see the Blend if Gray box. Move the white triangle to the left. Option-click on the triangle, and it will split into two halves. This gives you more control to create smoother transitions. There is no cookie-cutter solution for this step. Use your own intuition until it looks good. Every glass behaves a little different.

Do the same thing with the screen layer, except move the black triangle to the left. Once you're done, you will have convincing transparent glass. 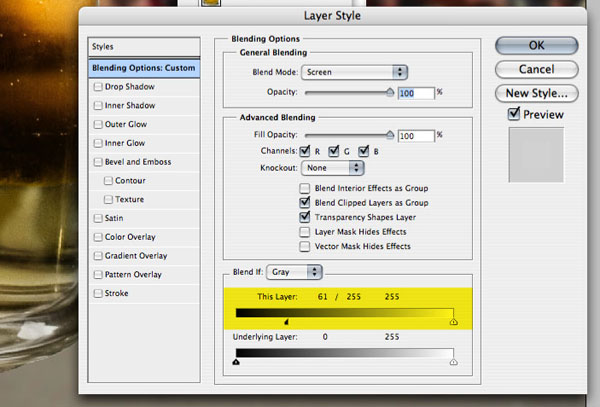 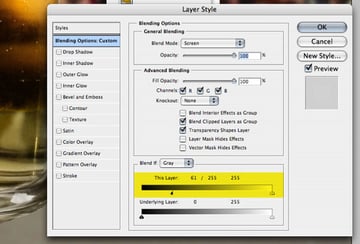 The problem now is that the multiply layer is too intense. You can see this on the layer behind the hand. Make a selection of the inside beer path in the Paths Palette. Go back to the Layers Palette. Then invert the selection by going to Select > Inverse. Create a new Layer Mask on the multiply beer layer. This solves the intensity issue. 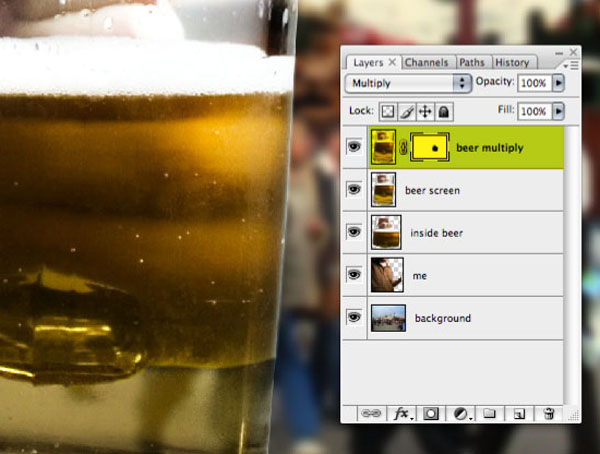 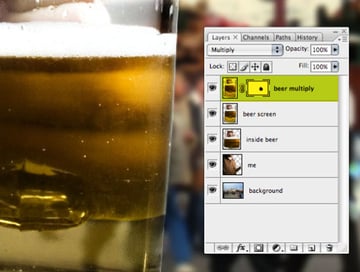 You may need to go back to the multiply layer and screen layer and tweak in the Blend If box. In some cases, there is too much transparency in the beer mug. In those cases, make tweaks through the Blend if dialog box. Since every glass is different, there is no exact value that applies to all glassware. Just try playing with the arrows until you get something satisfactory.

Sometimes you need to make minor touch-ups. If so, then make a selection of the beer and lightly brush in some areas through the Layer Mask. 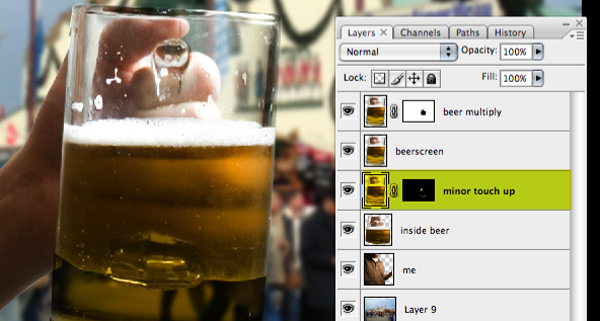 The last step is a simple technique used to make the image look good. Create a new layer named Vignette. Use a big, soft, dark-colored brush. Paint the edges to create a vignette. Set the Blending Mode to Linear Burn. Play with the Layer Opacity until it looks good. I set it to 80 percent. And there we have it, a composite image of me holding a beer mug at Octoberfest. 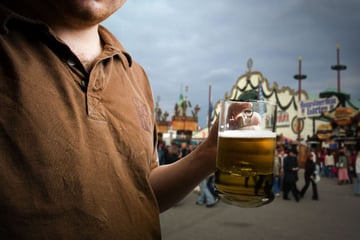 Chris Titze
Chris Titze works at an ad agency as digital FX artist where he spend most of the time with photoshop retouching Cars, Burgers, and Soda bottles.
Download Attachment