How To Create the Photo Manipulation "Brightness Tomorrows"

In this tutorial, I'll show you how to create a futuristic looking photo manipulation using some special tools, such as the Background Eraser Tool and how to blend pictures properly using Match Color Adjustments and Lighting Effects. So let's start!

Before we start let's download all the pictures we will need: road, bigger factory, smaller factory, woman, mist brushes and texture. The picture of sky is not available for downloading but you can use any sunset you find.

Open the picture of the road and of the sky you've chosen, then drag them into the new document. Name the layers "Road" and "Sky." The layer "Road" should be above the "Sky" layer.

Now you have to flip the pictures. To do that go to Edit > Transform > Flip Horizontal. Do it with both layers. Add a vector mask to the "Road." You can find the button Add Vector Mask in the Layers palette (F7).

The good thing about vector masks is that all the steps you do are reversible. If you use the Eraser Tool instead it's very hard to get back erased parts. But if you use vector masks, then you can always paint with a white color instead of the black, and the hidden parts will appear again.

So as I said, add a vector mask, press B to pull up the Brush Tool, choose a soft, round brush and pick a black color. Start to paint over the areas you want to disappear. After this step, you should have a picture similar to the one below.

Open the picture with the bigger factory and drag it into the manipulation. Call the layer "Bigger Factory" and place it above the "Sky" and "Road" layers. Flip the picture as you did with the previous layers. Now we have to remove the blue sky. Use the Background Eraser Tool to do this.

Good thing on the Background Eraser Tool is that you don't have to mask all the parts of the factory with the Lasso Tool or with the Pen Tool. Set the tool as in the picture below.

Click carefully on the blue sky. It will disappear, but the factory will stay. You can change Diameter and Tolerance to get a more realistic result. Don't worry if some parts of the factory will be a little transparent. It will look like some reflection from the sun, but still be very careful.

The more patient you are with the blending, the more realistic the whole manipulation will look. After this step, you should have something like the image below. 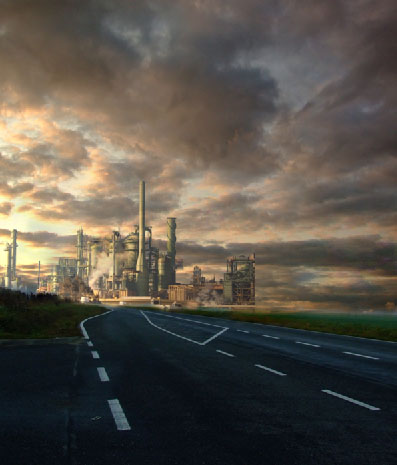 Open the picture of the smaller factory, drag it into the manipulation, flip it, then name the layer "Smaller Factory." Place it on the top of the layers.

Now choose the Background Eraser Tool again and paint over the sky area. One of the good things about this picture is that there is some artificial mist, as we'll be adding some more in the next steps.

In the stock picture of the factory the whole smoke is not shown. To add it and make it round press S on your keyboard for the Clone Stamp Tool. Press Alt and (still pressing it) choose some area with the smoke. Paint some more smoke to make it nice and rounded as shown.

The factory is fixed, but I think it would be better if the smoke had some more contrast. Let's add one more Brightness/Contrast Adjustment Layer. Now increase the contrast to the value of +40, then clip the mask again.

We want to affect the smoke only, and not the whole factory. To fix it press B on your keyboard, choose a soft, round brush with a black color, then paint over the vector mask of the factory (not the smoke!). The result of this step should be similar to the image below. 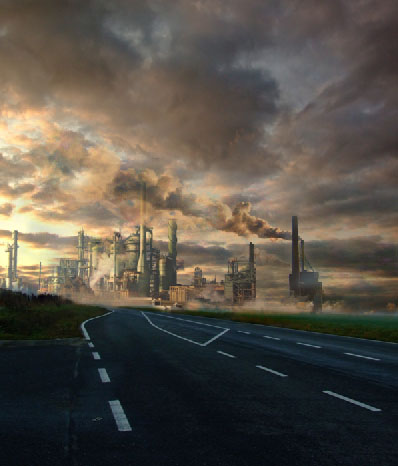 If you take a look at the previous picture, you can see that the road is too dark, it has the wrong lighting, and also the colors don't fit. All these problems will be fixed in this step though.

At first we'll improve the colors. Right-click on the layer "Road" and choose Duplicate Layer. I usually make a backup of the layer if the next step is not reversible and I don't know if I will like the result later.

Click on the new "Road copy" layer. Go to Image > Adjustments > Match Color... and set the values on the palette as shown below.

Thanks to Color Match... your picture should look like this one.

Much better isn't it? Now we'll add Omni Light. Go to Filters > Render > Lighting Effects and set it similar to that shown below. 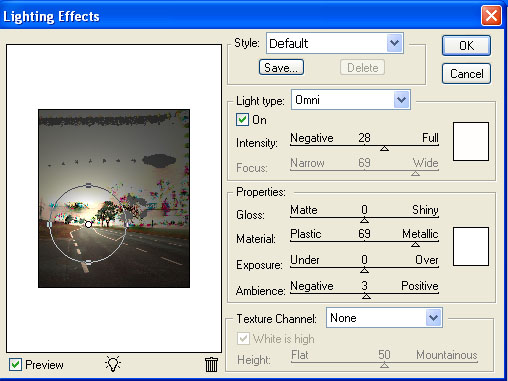 The result after this step is shown below. 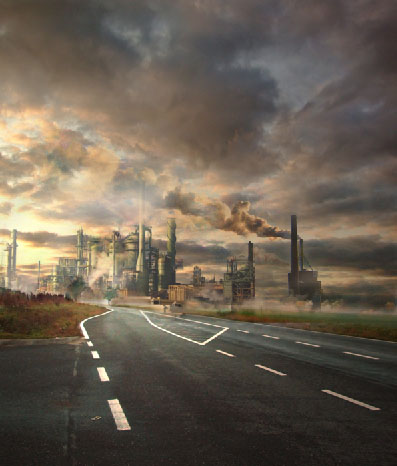 To create a more dreamy atmosphere we'll add mist. Add the mist brushes you downloaded. If you don't know how to add brushes into the Photoshop, then review this tutorial.

Select a bright yellow color from the manipulation. Create a new layer and start painting fog. Don't paint it too much - we want just small, light touches. If the mist doesn't look realistic, then you can lower the Opacity or change the blending mode of the layer to Screen or Lighten. 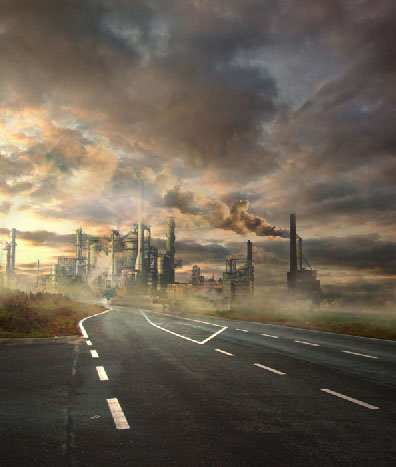 In this step, we'll make the picture more sharp. Press M for the Rectangular Marquee Tool, then select the whole image. Got to Edit > Copy Merged, and then Edit > Paste. It will paste the merged image with all the visible layers.

Now go to Filter > Sharpen > Unsharp Mask... and set the values as shown. 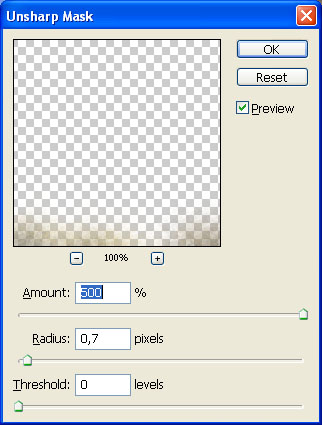 Now it's time for the first color adjustment. We'll add more violet colors to create a bit of a futuristic or unrealistic look. Add a Color Balance Adjustment Layer on the top of the layers, then set it as shown below. 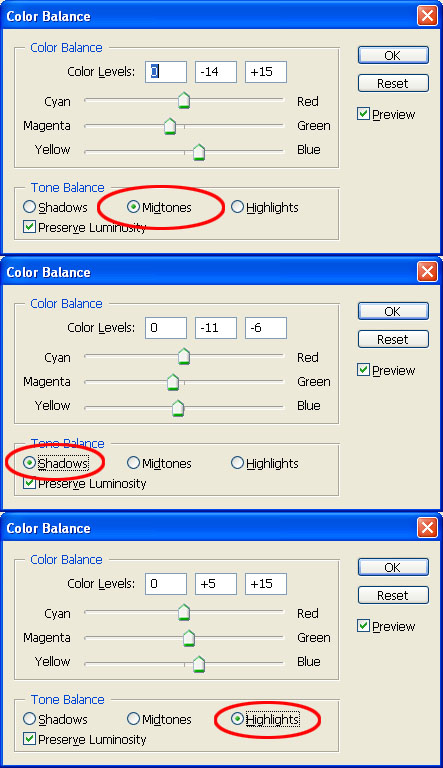 After this step your picture should be like this one.

To light the picture and give it a bit more contrast we'll add a lens flare. Create a new layer on top of the other layers, name it "Lens Flare" and fill it with a solid, black color. Go to Filter > Render > Lens Flare...and select the one you like. I used the first one, which is 50-300mm Zoom. Now press OK.

We have to change the blending mode of the layer to so we can see something else - not only the flare. To do that change the Blending Mode to Screen. You can also play with the Opacity of the layer if you're not satisfied with the result, but I didn't do that in this case. 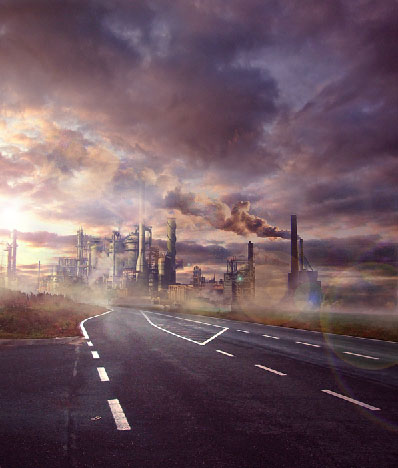 It's time to add the woman. Open the picture with her, cut her out and drag her into the manipulation. Call the layer "Woman" and place the image on top of the layers. Change the size of the picture and place it in the horizon.

I feel the women is too dark. We'll simply fix that by adding a Brightness/Contrast adjustment layer and setting the value of Brightness to +50. Don't forget to make a Clipping Mask.

According to the lighting of this manipulation, the woman should have a long, soft shadow in front of her. To add it, right-click on the women and select Duplicate Layer, then name the layer "Shadow." Press Command and click on the Layer thumbnail. It will activate the mask of the layer.

Now press G on your keyboard for the Gradient Tool. Press Alt and with the Eyedropper to select a dark color from the picture. Fill the mask of woman with this color. Go to Edit > Transform > Flip Vertical. Very well!

Now go to Edit > Transform > Rotate and change the rotation of the picture so it has the same direction as the lighting. Then press Command + T and change size of the shadow. Do it larger and little bit wider. 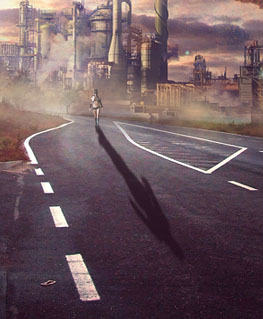 The shadow is too hard at this point. To fix it go to Filter > Blur > Gaussian Blur...and set the value Radius on about 3,5 px. The result of this step should be similar to the image below.

I think that the colors should me richer than they are now. In this step we will change the Color Balance once again and add a Photo Filter.

First we'll modify the color balance. Add a new Adjustment Layer Color Balance on the top of the other layers, and set the values like on this picture below.

Add a Photo Filter Adjustment Layer and set it as shown.

Very well, we are almost done. At this stage your image should be similar to this one. 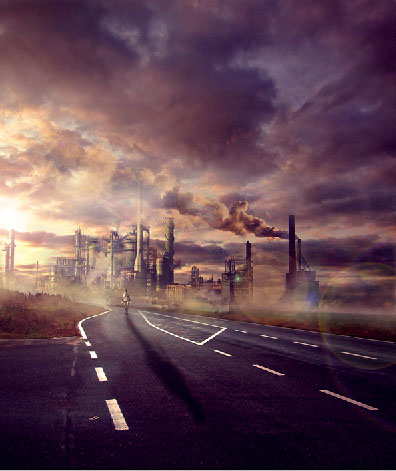 I like vignette because it's an easy way to border the picture and jail the viewer's look a little longer in the manipulation. So let's add it!

Now choose a soft, round brush, pick white for the color, and paint around the edges (still on the vector mask) of your picture. It will make the edges darker.

In this last step we'll add texture which will increase the contrast of manipulation a little more. Open the grunge texture you downloaded earlier and drag it into the manipulation. Now change the blending mode to Color Burn and lower the Opacity to about 10%.

Congratulation you've finished! I really hope that this tutorial was useful to you, and that you've learned some new techniques, or found inspiration for your work. You can see the final result below.