How to Create Speech Bubbles and Comic Effects in Adobe Illustrator

Comics as a medium are more than just the combination of text and pictures. A comic is a communication tool all of its own, and comes with specific languages and dialects.

Depending on culture, genre or style, there may be differences, but comics generally adhere to some common rules, which we will explore in this tutorial.

You will learn how to communicate with your comic readers through text, motion and atmosphere, and when it's best to use words or let pictures to do the talking.

If you're looking to get started quickly, don't forget that we have a great collection of speech bubbles and comic graphics on GraphicRiver as well!

A common speech bubble is usually made up of a oval shape, with a tail at the bottom, indicating which person is the speaker.

To make a brush we can use for making these tails, start by drawing a triangle similar to the one below. While having the triangle selected, press New Brush from the Brushes panel and choose Art Brush.

Now we can draw the tail in one stroke.

2. Use Zig Zag to Convey Shouting

To indicate someone shouting, make the oval part of the speech bubble a zig zag shape. While having the oval selected, go to the Effect menu, choose Distort & Transform, then Zig Zag...

Play around with the settings until you get the desired amount of jaggedness.

Now we just add the tail with the brush from before. The same brush can make more jagged shapes as well, just by drawing in a more angular way.

Another common type of bubble is used to convey not speech, but thought. Usually the oval shape has a bubbly, cloudlike shape to it. Creating a brush to achieve that effect is easy. Just make a Pattern Brush from a circle object.

Apply it to an oval shape, and there you have it! Well, almost. We also need a tail.

The tail for a thought bubble is usually not the same as for speech bubbles. Instead it is made up of small bubbly shapes. This time I make a slightly oval shape, and use it as the base for a Scatter Brush.

In the Scatter Brush Options I lower the Spacing a bit, with a fixed value of 70%. I also set the Size to be indicated by Pressure, and have the range be from 30% up to 100%. This means that the more pressure I apply, the larger the stroke will be, and if I draw more loosely, the stroke will shrink in size.

So I start the tail by pressing down harder, then let loose at the end of it to get a tapering effect.

With the speech, shout, and thought bubble mostly done, there is just one thing missing. I want a black outline for them as well.

I start by selecting them all, and go to Object > Expand Appearance, to turn the brush paths into objects. From here I select all the white objects which make up the bubbles, then go to the Pathfinder panel and select Merge.

Now that all parts are merged, I select a black stroke with a Weight of 2 pt.

Now that we've gotten the hang of how to make speech bubbles, let's take some time to think about the text inside as well.

First off, you want to have some space between the edges of the text and the edges of the speech bubble. Of course you don't want the bubble to look empty if you don't have much text in it either. I usually envision a border around the whole text, about as thick as one letter of the text, give or take.

Another thing to watch out for is canals within the text. You can see in the left speech bubble below how the spaces between the words align in a straight row, which can be a bit distracting.

This is the way the font naturally lays out the text, so to change how the spaces overlap, I can either type each row on its own, or I can Make Outlines by selecting the text and pressing Command-Shift-O. This will turn the font into objects. While you lost the ability to re-type, moving the words how you want them is much less hassle.

Which font is used can determine the impact of the text. Comic Sans, for example, is an almost universally disliked font, while some others are well-liked but maybe less suited for comics. There are a lot of good resources out there for comic fonts, like Blambot for instance, where you can purchase fonts for about every type of comic out there, including sound effects.

There are also fonts which can be downloaded and used for free. For example, the font I use for my examples in this tutorial is called Nina and can be found at the Internet Archive. It uses a Creative Commons license called Attribution ShareAlike, which means that you are free to use and modify the font however you want, as long as you provide links to the license, and distribute any changes you've made to it under the same license.

For some choice words you might want to create a bigger impact. Using the Warp tool on the text can create some great effects. One of my favorites is the Bulge Style, which can be chosen from the drop-down menu.

Communication can of course also be without words. There are several ways of conveying motion within a comic, but a common way is with so called motion lines.

To indicate small movement, like someone shuddering, the motion lines need to become small as well. While drawing these lines I almost mimic shuddering myself, which gets nice jittery lines.

For long, fast-paced movement, the lines become drawn out as well. In the example below I also add some motion lines along the feet and elbow. I think this adds to the feeling that not only is the person moving forward, but the limbs are moving as well.

The lines need not be straight either. Mimicking the path an object is moving on will help bring the comic panel some speed.

In the example below I add motion lines not only to the arm of the boxer, but also to the sack which receives the punch. Where the glove hits the sack, I draw some focus lines to show the impact, but also some smaller motion lines at the edges of the sack, showing how it is set in motion by the punch.

Aside from motions, there are of course emotions. While we as humans have our own well established language of emotions—smile = happy, frown = angry, etc.—comics have an additional symbol language to indicate emotions as well.

You may be familiar with heart-shaped eyes showing a character in love, dollar signs (or another currency) as eyes indicating greed, and the large sweat drop (often used in manga).

In this tutorial we have gone over some common visual effects in comics.

We have learned how to create time-saving assets for making speech, shout and thought bubbles, and some things to look out for when it's time to type the text in them.

We've also gone over how to express movement in comics, from small motions like shuddering to explosive ones like punching.

Lastly we've talked about how symbols can be combined into facial expressions, adding yet another layer to the visual language of comics. 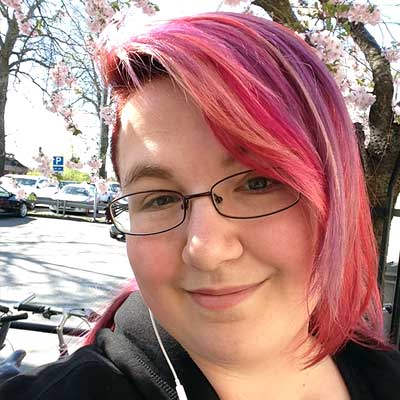 Sara Berntsson
Freelance illustrator, Sweden
My work has varied from greeting cards, stickers and dress up dolls, to kids apps, game graphics and emojis - the constant always being cute and colorful characters. Though my professional work has been within the 2d illustration field, I've also studied comics, and 3d graphics for games, and I'd love to branch out even more. I think I have the greatest job in the world, and I'm always looking for new ways to create art.
frilansara
Weekly email summary
Subscribe below and we’ll send you a weekly email summary of all new Design & Illustration tutorials. Never miss out on learning about the next big thing.
Advertisement
Translations