How to Create Organic Textures for the Scarecrow in Adobe Photoshop

Here's something I just cob-bled together. It was a-maize-ingly fun and I have a veritable corn-ucopia of Photoshop brush tricks to help you add texture to your illustrations. If you'll lend me your ear I'll show you how!

Here's our illustration. It looks pretty good, if I do say so myself, but a little flat.

In this tutorial I will take this guy from "Plain Grain" to "If I Only Had a Brain" in a few easy steps! We will be focusing on texturing his body with sack cloth, adding padding to the scarecrow and bird's nest with straw and adding a grain to the fence between Scarecrow's field and the Yellow Brick Road.

OK, enough with the corny jokes—let's get texturing!

The assets I will be using for this project are as follows:

Here's Scarecrow isolated from the rest of the illustration for clarity. Here are the areas we are going to be making lovely and rough.

Here's an example of the sack-cloth texture we wish to emulate. We won't be going this detailed, as the finer nuances wouldn't hold up at print size, plus it wouldn't fit in with the rest of the piece.

Here we will start off with Scarecrow's abs in the "tummy" folder.

Create a New Layer under the shadows layer (which I painted in earlier using a light blue on multiply) by pressing Control-Shift-N. Then right click it and set it to Clipping Mask. 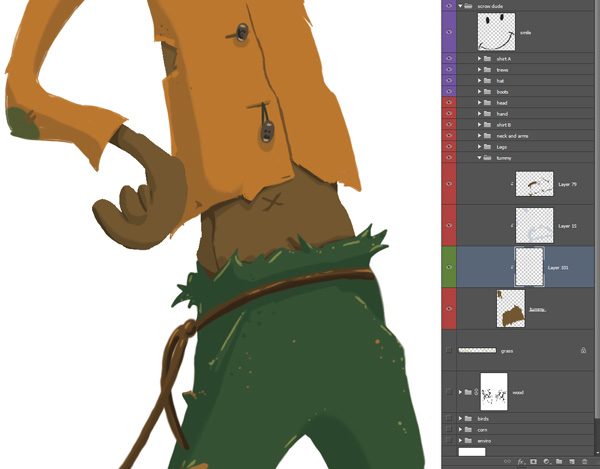 On this layer select a slightly lighter brown than the base and paint in horizontal lines which would follow the contours of the form.

Next create a New Layer above that and draw in vertical contour lines. Note how I have curved them in to give the appearance of a belly button. 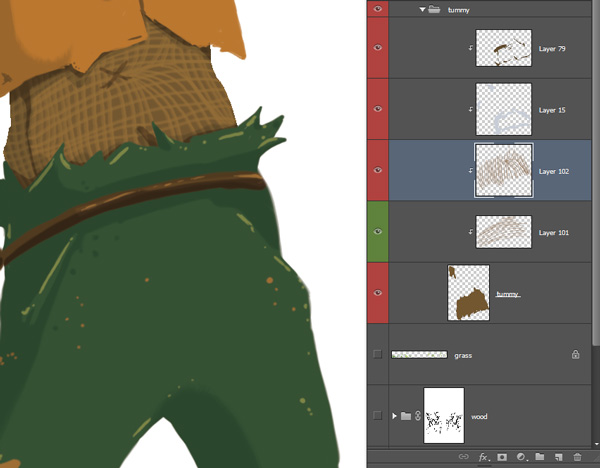 Then select both these layers by holding Shift, and drag them onto the New Layer icon at the bottom of the Layers panel. This will create duplicates of these layers. Then in the Layer Blend Modes set the blending mode to Multiply on both the lower ones, and move them using the Move Tool (M).

Next I will move on to the face texture. Here in the Head folder which I created earlier I have a really dark shadow layer, a blue shadow layer set to Multiply, an empty layer for our texture, and the base shape layer. The two shadow layers and the texture layer both clip to the base head shape. This enables us to paint loosely while still keeping clean edges.

As before with the tummy, I draw horizontal contours round the face. Note how this now begins to look curved. I also drew contour lines around the ears for cuteness!

Next I add in the vertical strokes.

Carrying on the form design, keep doing contours on areas like the hands, neck and legs. 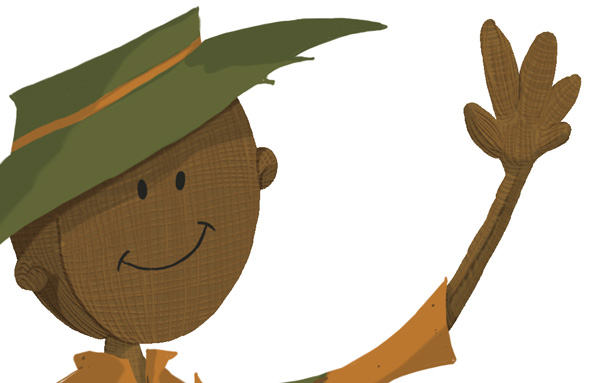 Next, here's a wee trick for you. At the top of the Layers panel there's an icon that looks like a chess board next to the word Lock. With the crosshatched layers selected, press Control-E to merge them and click on the chess board. This will lock the transparency on that layer.

Now, using the MH 8B Shader 2 brush, paint in some light beige areas. I decided to give this scaredude a goatee so painted that in. This adds some cool dimension and depth.

... and here we have the scarecrow with his highlighted areas of sack cloth using the lock transparency method. He looks so rough and rugged! Next we pad out the nest with some straw and have some strands coming out of his sleeves, trousers and seams.

Here's the plan. We need some straw for this dude's stuffing, plus drawing texture is fun!

Here's some straw. To replicate this we will need:

Thankfully this can be easily created with erratic brush strokes and a custom scatter brush! Let's start off with that scatter brush.

Create a New Document by pressing Control-Shift-N. Set the Width and Height to 1000 px at 300 dpi.

In that document, using black "paint", draw in some random dots and lines using the MH 8B Shader 2 brush.

To create a brush in Photoshop go to Edit > Define Brush Preset and save the brush. Here's the brush straight out the box with no amendments. 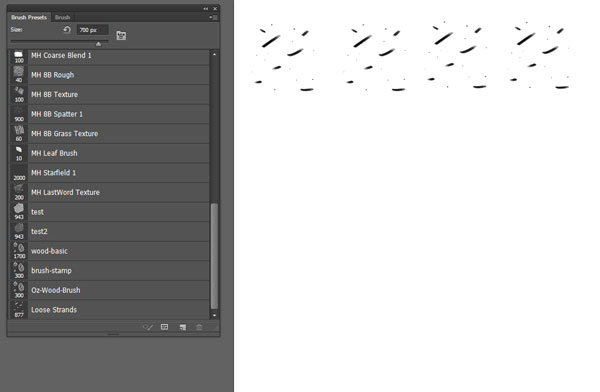 Under Brush Tip Shape in the Brush dialogue (F5 on the keyboard), tweak the spacing slider until the stroke resembles something like the second line. 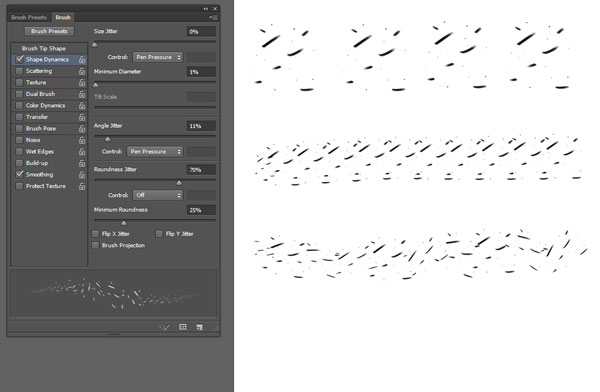 Back in the Brush Tip Shape I change the Spacing of the brush so it's a little further apart. This looks good, so we save the brush by clicking on the square icon at the bottom of the Brush panel and call it something like straw_scatter.abr. 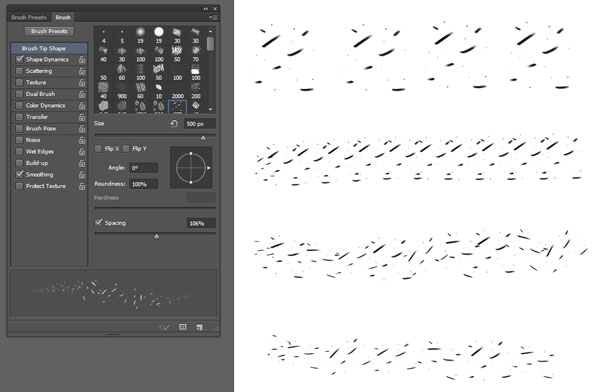 OK, these birds don't look too comfortable, so let's add in some random straw lines using MH 8B Shader 2 in a fresh yellow hue in the Birds folder above the chicks.

Add dots to imply seeds and lots of random lines moving out from the chicks.

Add in smaller tufts of straw over the chicks layer.

Now we get to use our Scatter Brush to imply loose straw. Using the same yellow colour as before, paint in random areas. Change the brush size quickly by pressing the [ and ] keys on your keyboard.

For some more realism, add some loose parts under the hat layer using our scatter brush.

Then by hand draw in some extra strands under the hat layer using Matt's MH 8B Shader. He's starting to look really rugged now! 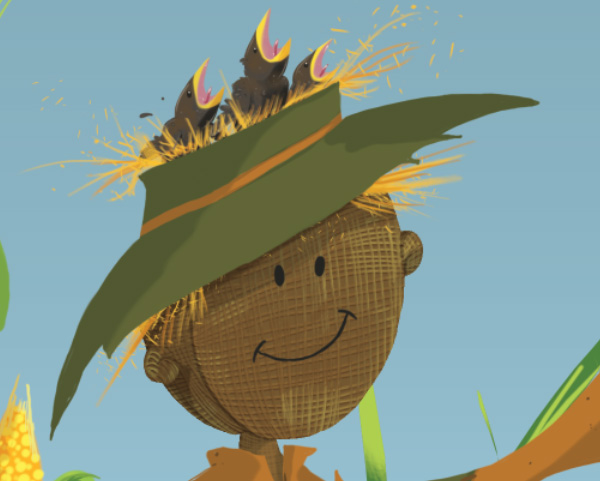 To make him look a little "burst", add straw coming from areas like the collar...

... and the sleeve. Here I've added a few strands of straw to imply movement as the scarecrow waves. Use the scatter brush as much as you like, changing up the size using the [ ] keys on your keyboard.

For fun I add in a light scatter of straw dust on the face for a straw beard.

Then I select a dark brown and, using the scatter brush, I make the brush quite small and imply straw-like stubble. I add little areas all over the piece to give a carefree, loose feel. 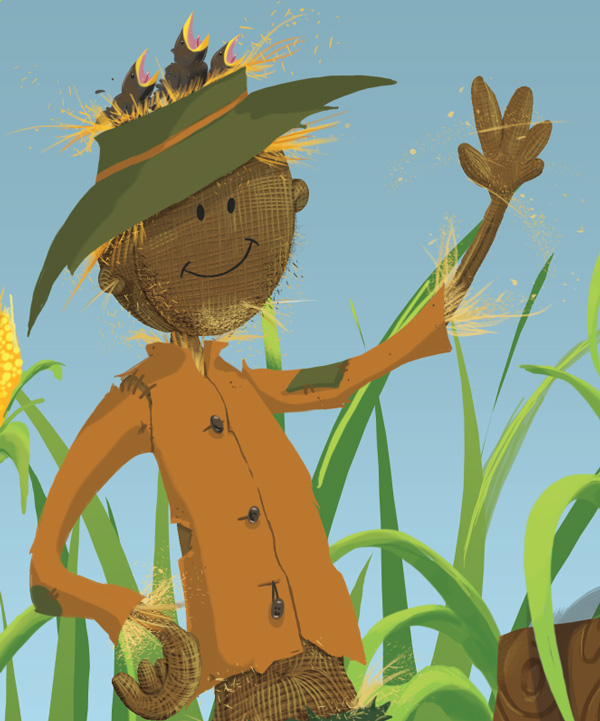 
Now that our Scarecrow looks awesome, let's move on to his environment a little. The fence posts look a bit too plain.

As you can see from this reference image, wood has lots of different hues, a grain and some knots. Rather than draw in all the knots by hand, I will show you how I would create them using a scatter brush! 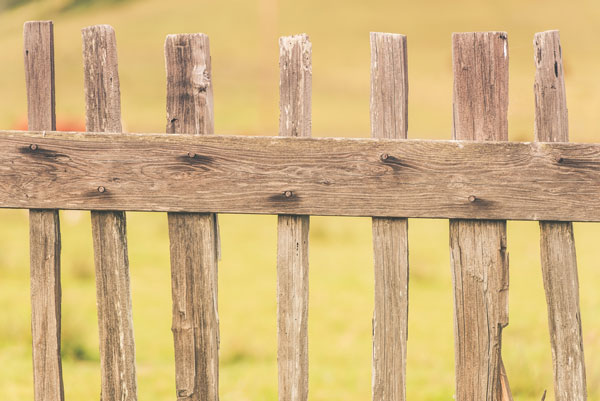 Create a New Document by pressing Control-Shift-N, and set it to 2000 px by 2000 px at 300 dpi. We need this one to be slightly larger than the straw particles one, as they will be bigger on the final illustration.

In our New Document, create a New Layer and, using the MH 8B Shader 2 Brush with black "paint" selected, draw in a couple of concentric circle sets to imply knots, plus a few dots and marks. Depending on your drawing style, these can be as detailed or as loose as you like. Here I've gone for loose. Then, once you are happy with your brush, go to Edit > Define Brush Preset and save your brush.

In the Brush Presets (F5) change the Spacing to around 165%.

In Shape Dynamics set the Size Jitter to Fade at 25%.

Next, in Scattering, set Scatter to 1000% and to Pen Pressure and Count to around 3.

Here I test out how the brush is looking, and it's pretty cool and random. I find it works better as a stamp than using a stroke to lay down the design. Again you can change the size of the brush dynamically by pressing the square brackets on your keyboard.


Let's move on to applying the knots to the planks. Before this tutorial I had each plank set up with its own shadow layer set to clipping mask. Between each shadow/plank layer, create a New Layer and ensure it's set to Clipping Mask (right click on the layer and select Create Clipping Mask).

In the Layer Blend Modes, set this layer to Multiply and colour-pick the brown of the plank by holding Alt and clicking on the plank. With our Knots brush selected, paint some knots over the plank. This might take a few tries. A quick way to go back a few steps is to press Control-Alt-Z.

Once you've gone over all the planks in the same way, see how it looks. I felt the knots were too dark so I lowered the Layer Opacity to around 40%. To make the planks woodier, I draw in some grain which contours round the knots.

Here's how all the planks look together. It's starting to look more wooden!

On a New Layer above the wood, paint in some highlights by using a warm honey colour and the MH 8B Shader brush. 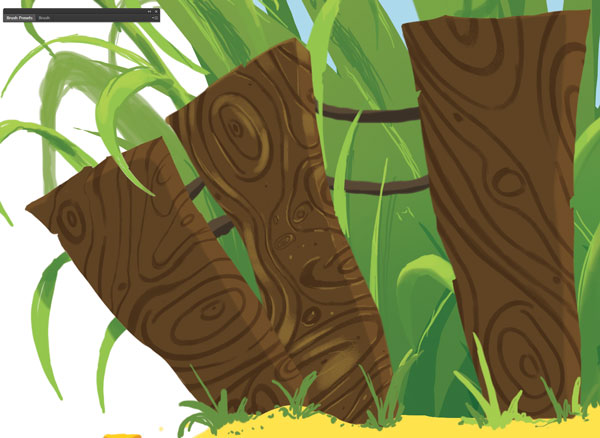 Carry on over the piece adding thin, subtle highlights.

Add fewer highlights in shadowed areas for a realistic appearance.

To add a bit more depth I painted in some leaves from the overhanging shadows with a dark blue on a clipping layer set to multiply on the planks. This is looking pretty cool, and I'm feeling happy about it all.


Here we have our completed illustration! I have gone in and added some patches to his cheeks and grunge marks using Matt Heath's awesome brush on Multiply layers.

You will be able to create your own textured illustrations in Photoshop—I'd love to see your results! If you would like to see any other textures covered in my tutorials, please leave a comment below. 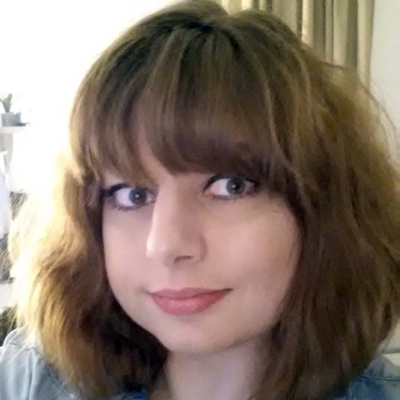