by Rafik Massoud19 Jul 2008
Difficulty:IntermediateLength:LongLanguages:
DesigningAdobe Photoshop
This post is part of a series called Photoshop Tutorials for Beginners.
Use Photoshop CS5 Extended to Create a Simple 3D Logo - Screencast
How to Create Cool Watercolor Effects in Photoshop

It seems everyone wants to learn how to make something look vintage or grungy. In this tutorial, I'll go over how to create a fifties love letter with stamps, a bent corner, and a retro border using the brush engine, Rectangle Tool, layer styles, blend modes, and several intermediate techniques that are sure to propel your skills to the next level.

Open a paper texture of your choice. I used this one. Desaturate it and bring it into the letter document. Change its blend mode to lighten and lower its opacity to something near 70%.

You may need to stretch it a bit, or you could duplicate the layer and flip it horizontally. Then go to Edit > Auto Blend Layers. Just be sure to flatten the layers or convert them to a Smart Object.

Now open a canvas texture of your choice. I used this one. As before, Desaturate it and bring it into the letter document. Make sure it’s the top layer. Change its Blend Mode to Color Burn and lower its Opacity to around 10%. If the canvas texture is too big, remember to scale it down a bit.

Duplicate your background layer (the one with a radial gradient). Drag it to the top of you Layer’s Panel. Then change its Blend Mode to Overlay with an Opacity of approximately 70%. After doing this, select all the layers and group them. Call this group “Background” (you may need to unlock the background layer in order to include it in the group). 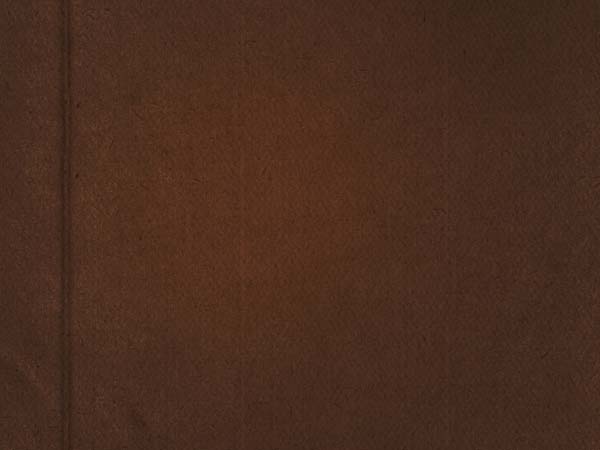 On a new layer use the rectangle tool to create an envelope sized rectangle. Make sure the fill color is #f2d27d.

Duplicate the same paper texture (this one). Then drag it on top of the "envelope layer." Be sure to change its Blend Mode to Hard Light with 75% Opacity.

Create a Clipping Mask between the envelope layer and the texture layer by holding down the Alt key and clicking between the two layers.

Now select both layers, flatten them, and rotate the new flattened layer a bit to give it some interest. For the sake of being organized, rename the flattened layer “Envelope.”

On the new Smart Object, apply the layer styles and settings shown below.

On the envelope layer, use the Polygonal Lasso tool to select one of the corners. Once you’ve made you selection, press Ctrl+J to duplicate the selection onto its own layer.  Make sure to remove the layer styles on the duplicate layer. 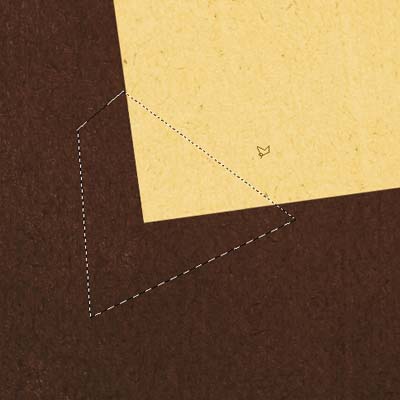 Select the new corner layer and distort it a bit. I went to Edit> Transform > Distort. I chose to bring in the bottom left corner towards the right and up a little bit. 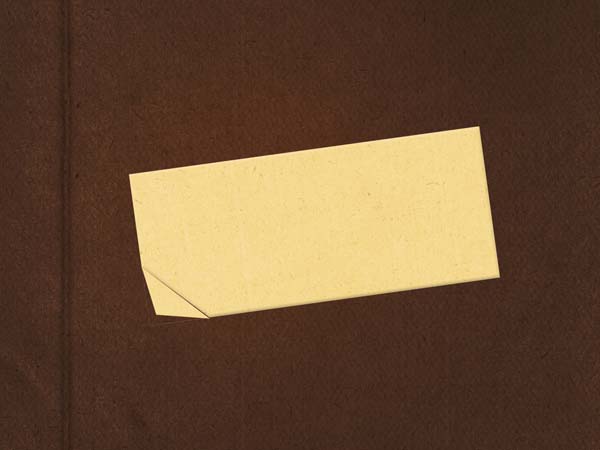 Now on the new corner layer, use the Polygonal Lasso tool again to make a selection similar to the one shown below. Repeat steps 10 through 12 after you’ve done this. Except instead of creating a mask on the envelope layer, you’re going to create the mask on the corner layer that you duplicated from.

Also, instead of pulling the bottom left corner to the right, you need to pull it to the left and down a bit. I went ahead and repeated the process one more time. Before you go onto the next step, make sure to make any final touch-ups regarding selections. You may have some stray pixels that weren’t covered by the layer mask.

Select all corner layers, flatten them, and use the Smudge tool to soften the edge that connects the corner to the envelope. Then name this layer “Corner.”

Here is where we’re going to make it look better. Create a new layer, fill it with 50% gray and change its Blending Mode to Overlay. This allows you to get the same effect as dodging and burning, but it does so non-destructively.

Name this layer “depth.” Use a large soft edge Brush and paint over the top of the envelope and document using a black fill for your brush. You’re probably going to need to lower the Brush Opacity and Flow. I have my Brush set at 25% Opacity. If the effect is still too dramatic for your liking, you can always turn down the opacity of the layer. 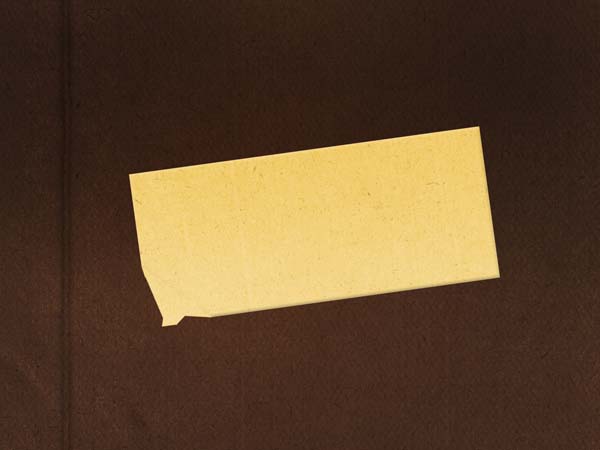 Now onto the corner. Use a small soft Brush with a much lower Opacity and Flow (so that the effect is more subtle) to paint with. Go over the areas you want to be shadows with black, and paint over the areas you want to be highlights with white. You may have to go over certain areas more than once. Remember to make sure you’re being accurate with you painting, from here on, making changes will be difficult.

Duplicate the image by going to Image>Duplicate. Now flatten all the layers. Then Desaturate them by pressing Ctrl+Shift+U. Save this new file as letter_map.psd. This is critical. The file has to be saved as a PSD in order for the remaining effects to work.

Now drag the desaturated layer to the original document. Hold down Shift as you’re dragging it from one document to the other to center it perfectly. 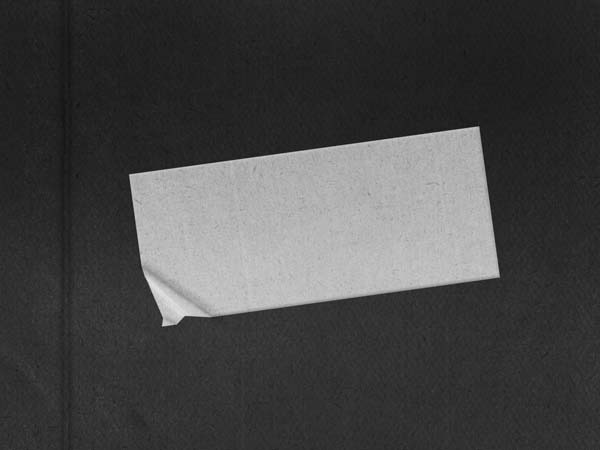 In the original document, move the recently imported file right under the “depth” layer. Then change its Blend Mode to Multiply and change the Opacity to a setting you feel is necessary. 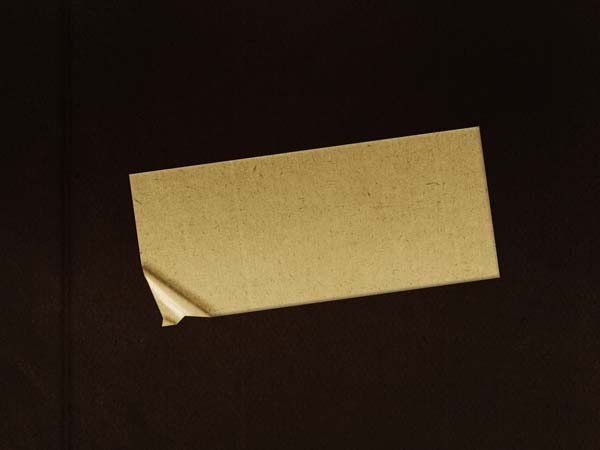 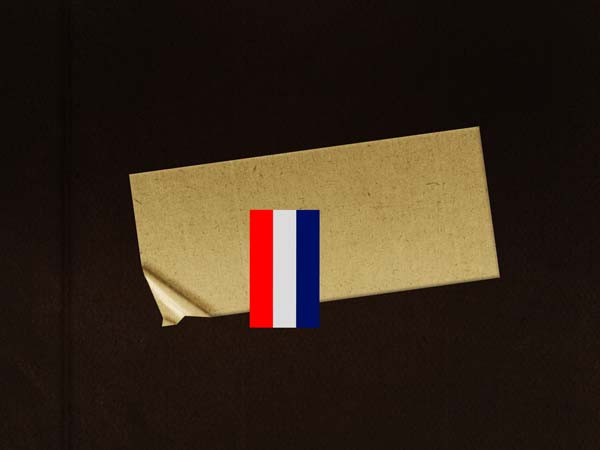 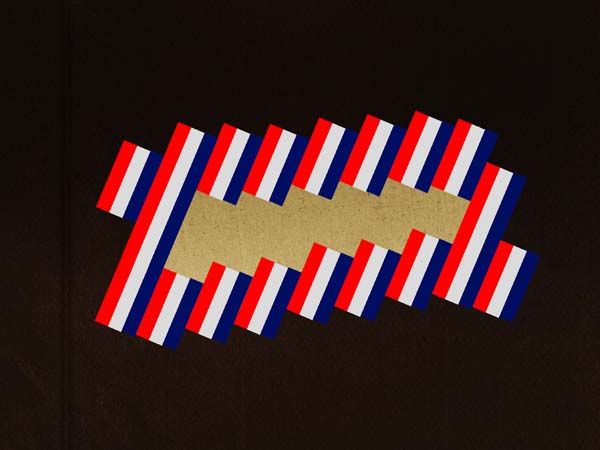 Change the Blend Mode to Multiply, duplicate the border layer, drag it above the corner layer, and create a Clipping Mask between the border and the corner. 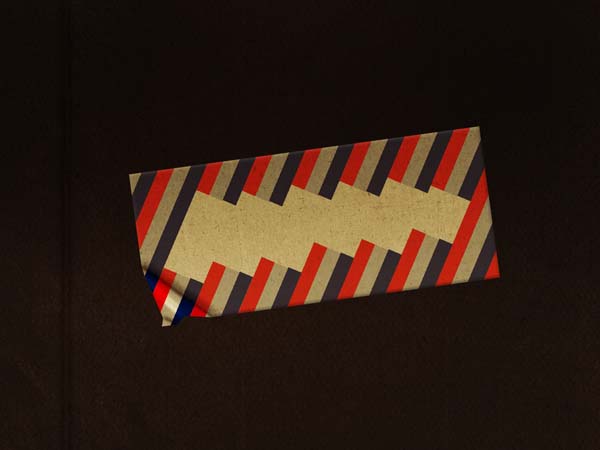 Add a layer mask to one of the border layers so that you get a nice thin border inside the envelope. After you get the right look, hold the Alt key and click on the Layer Mask. Then drag it to the other border layer.

Note: The best way to make your selection is to Ctrl+Click on the thumbnail of the envelope layer. Then go to Select > Transform Selection and scale the selection.

So far the border has been rather flat. Here is where you’re going to make it more realistic. Select one of the border layers. Once it's selected go to Filter > Distort > Displace. The default setting should be fine, so don’t worry about messing with those unless you want to.

Press OK, and navigate to letter_map.psd, select it, and click Open. Do the same thing on the other border layer. For those who are curious about what the displace filter does, there is a great explanation here. 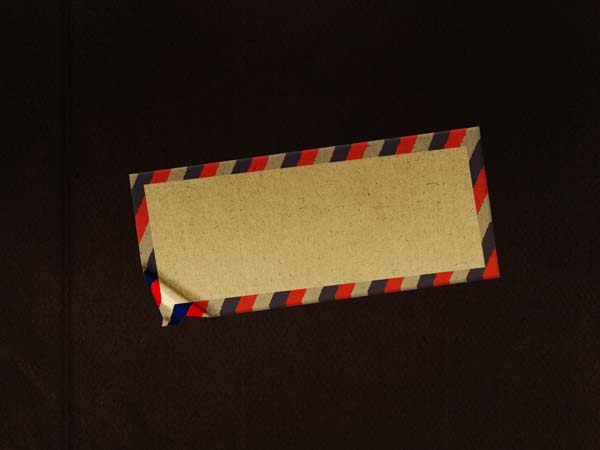 On a new layer use the Rectangle tool to create a square with a fill color of #e9e8e8.

Add a Layer mask, select the Brush tool, and go into the Brush Engine. Increase the Spacing of the Brush Tip Shape . It may take a bit of experimenting to get this part right depending on the size of your image.

With the square layer selected, grab the Pen tool. Then right-click in the square and select Stroke Path. Select Brush in the dialogue box that appears. Make sure your foreground color is black. 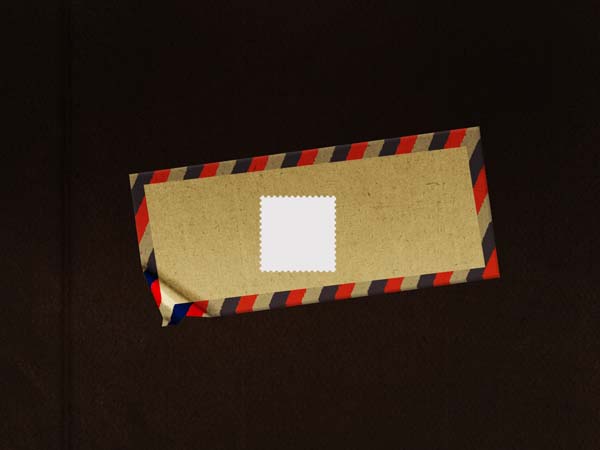 Now duplicate this square layer. Then delete the layer mask on the duplicate layer. Once you’ve done this scale down the duplicated square by going into free transform mode and holding down shift+alt/option and dragging in one of the corners. Change the color of this new square to something bright so you can see it. 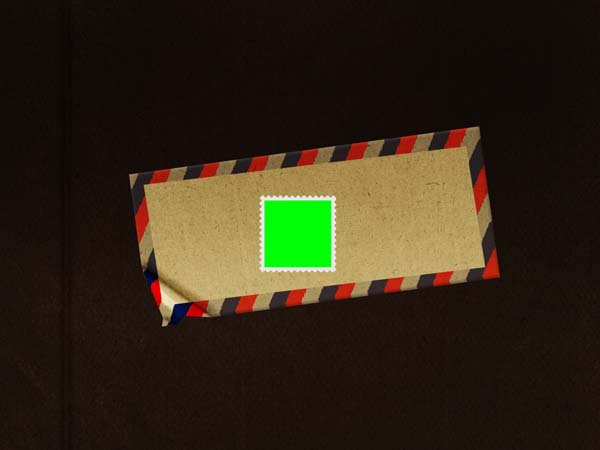 Drag in the image you want to use for your stamp. I used this one. Once you have it in the document, apply the Dry Brush Filter to it by going to Filter > Artistic > Dry Brush. Try to make the picture look less like picture and more like artwork.

Scale down the image if necessary. Then create a Clipping Mask between the duplicate square layer and the image.

Select all the layers that make up the stamp and convert them to a Smart Object. Once you’ve done that, duplicate the Smart Object two times, and rotate each stamp differently. 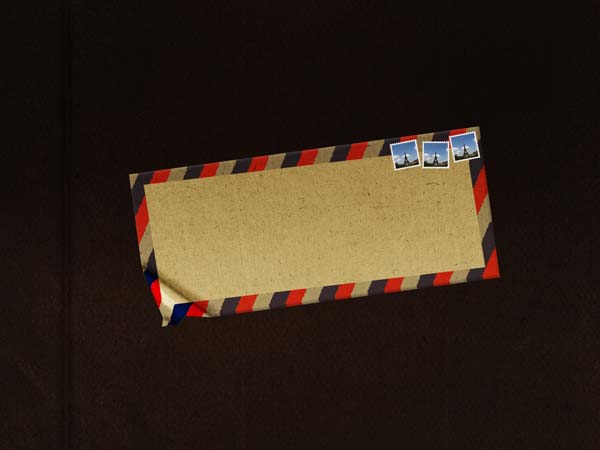 Group the stamps and move them under the “depth” layer. If you like, you can turn down the Opacity a bit. 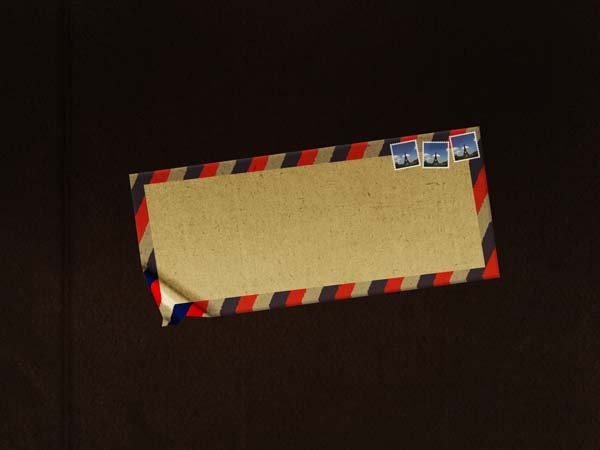 One a new layer, use the Ellipse tool to create a circular path. Make sure you’re using a hard edge Brush. The size of the Brush will depend on the size of your circle. Right-click on the circle path and select Stroke Path.

Duplicate the circle several times, and scale each duplicate down till you have an effect like the one shown below. It’s easiest to make one duplicate at a time, scale that duplicate down, and then repeat the process again on each one. 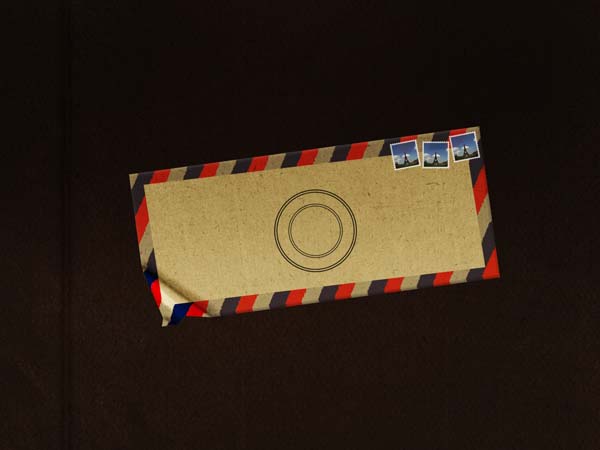 Once you've finished scaling your circles, select the Custom Shapes tool and select one of the Symbol Preset Shapes. Place it in the center of the circles.

Use the Line tool to create a long line stemming from the outer most circle. Remember to hold down the Shift key to make the line perfectly straight. Once you’ve done that, press Ctrl+T to go into Free Transform mode. Move the line down by pressing Shift+ The Down Arrow. Then press Enter when you’re done.

Now press Ctrl+Shift+Alt+T six to nine times. This will duplicate the line and move it the exact same distance every time you press the T. The distance was determined by the number of times you press the Down Arrow in the previous step. Now apply the Wave Filter by going to Filter > Distort > Wave. 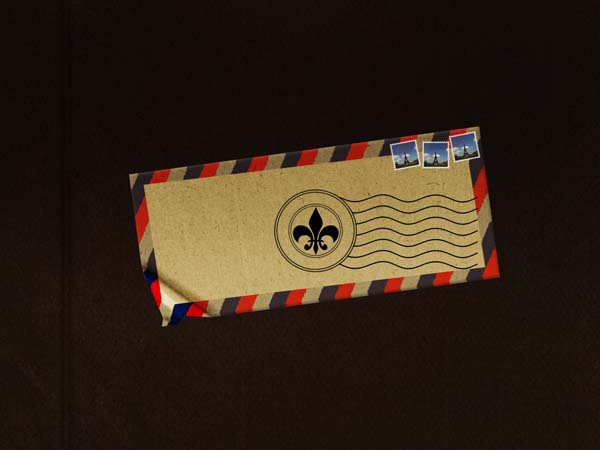 Select all the layers that make up the mail cancellation and group them. Create a Layer Mask for this group. Then fade out the ends of the lines. Gradients and Grunge Brushes work best for this. I also took the opportunity to get rid of the wavy lines that were in the circles using a Layer Mask.

Scale down the cancellation stamp and move above the postage stamps. Also don’t forget to add some text to the letter with the handwritten font of your choice. I used Luna Bar. 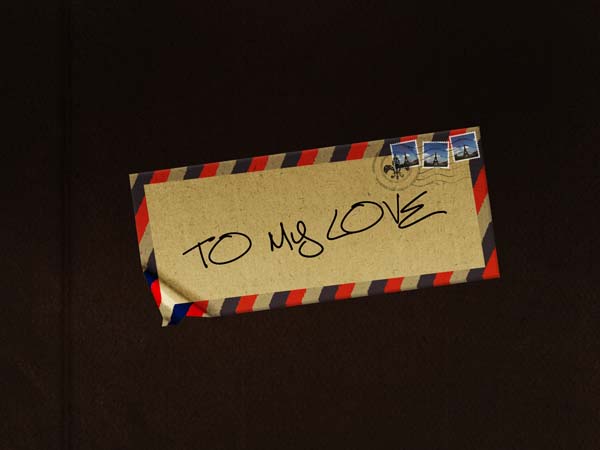 Now to give the letter a distressed look, select the border layers and paint on the Layer Masks with a Paint Splatter Brush or any Grunge Brush of your choice. You can find a lot of these types of brushes on DeviantArt. You can also use the same technique on the stamps and the text layer, just remember to turn down the Flow and the Opacity of the Brush. 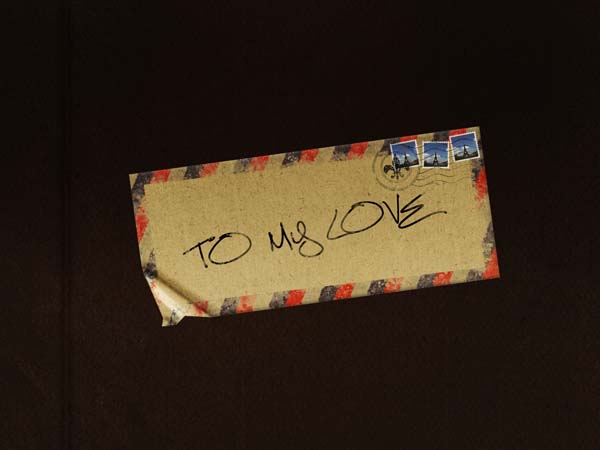 That’s it! Add a little shadow and you’re finally done! 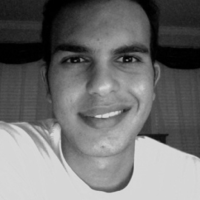 Rafik Massoud
I am a young graphic and web designer living in Texas. I spend a lot of my time playing around in Photoshop as well as playing soccer (Football). I hope to one day become an expert in Photoshop and as well as own my own design firm.
Weekly email summary