What Is Anime/Manga and Why Should You Create It in Vector?

Dean Carianas-Mannar Feb 19, 2013
Read Time: 10 mins
TheoryVector
This post is part of a series called Anime and Manga Illustration.
Getting Into Anime and Manga Artwork and the Tools You'll Need

Today we will be looking at exactly what makes a drawing "anime styled", the general theories behind drawing in this style, and why vector is a fantastic medium to work with when creating anime/manga styled artwork. This is a great introduction for those who aren't familiar with the style and wish to know more.

Before looking at the details of drawing in the anime and manga style, first it needs to be established exactly what makes something anime styled. This style originates in Japan and, by definition, the term anime refers to Japanese animation, the cartoons you see on the television, and the term manga refers to comic strips depicting a story of some kind, such as a printed graphic novel. However, Japanese-speakers often use the word manga to refer to both printed media and the animation.

When it comes to discussing the style of the drawings themselves, these terms are fairly interchangeable.

There are many different artists, each with their own sub-styles within the blanket term of the anime style, and many of these styles can differ greatly and become hard to define in terms of artistic style, but there are various key factors that have been repeated within the anime style so frequently that they alone can be used to define something as anime styled. These key factors include exaggeration of the eyes, often paired with understated nose and mouth, and elongated anatomy. Physically impossible hairstyles, or big hair, are also found frequently within this style. Of course there are exceptions, as with any style, but for ease of understanding, this article will focus on what have been determined as the style norms and the general theory behind it. The rest is up to the individual artist. 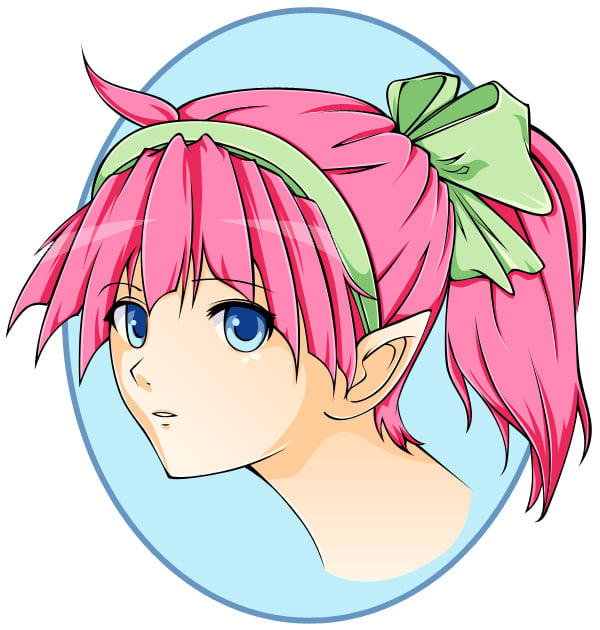 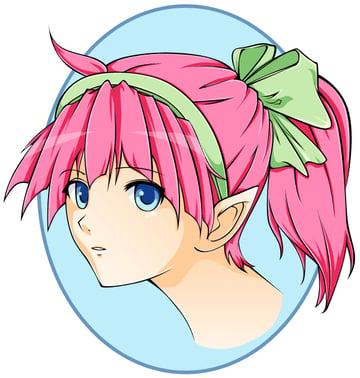 As the eyes are often a defining factor of an anime styled drawing, understanding the basics of drawing them is an excellent first step to take in mastering this popular style. As you can imagine, there are hundreds of different ways to draw eyes that could be considered as anime styled, and a great deal of it comes down to personal choices and an artist's own style influencing the anime style itself. 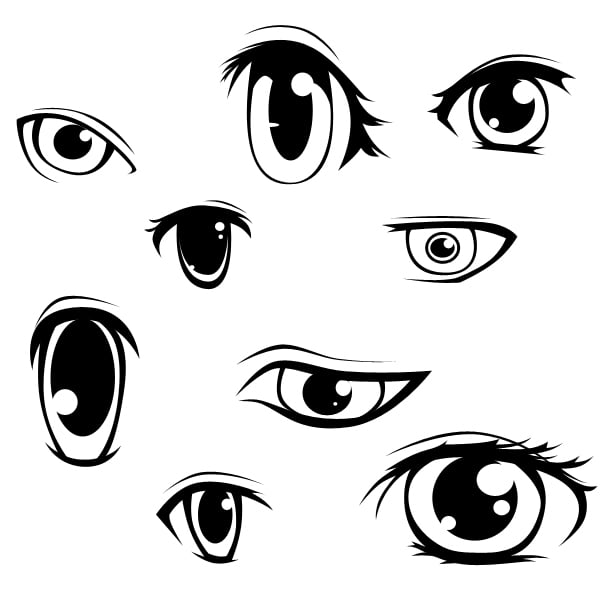 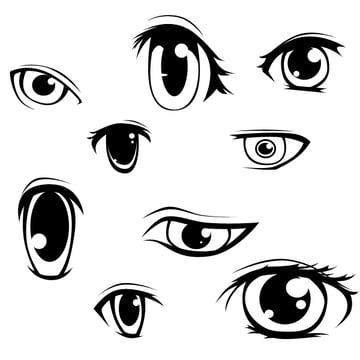 When it comes to the rest of the face, generally speaking, less detail is given to the other facial features, and it can sometimes appear more like they are symbols representing the nose and mouth, rather than them being drawn fully. Again, this comes down to personal styles and preferences, and different artists come up with various ways of drawing the features to suit their artwork. If you'd personally prefer to have the face appearing more realistic, then you could work that into your own personal style.

On the subject of facial anatomy, in the anime style, the curves of the face, particularly the cheekbones, tend to be a little more prominent than a realistic face shape, with the jaw line on male characters tending to be quite straight and defined, while the females have more of a soft look. A male's neck would be slightly thicker, and show the Adam's apple, whereas the female character would have a thinner neck. A child's face shape would be quite round and undefined, but there is often still the prominence of the cheeks. 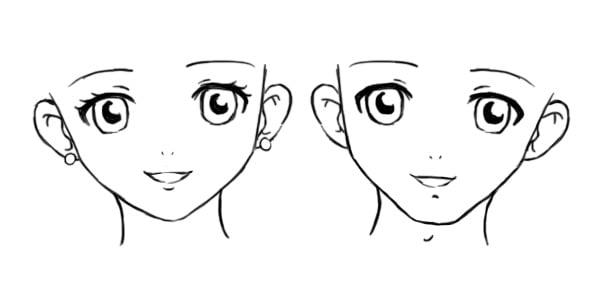 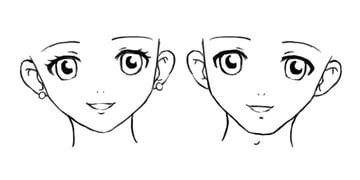 Anatomically speaking, anime styled characters are often a little elongated in comparison to human proportions, but are still based on realistic human anatomy. An anime style character's head tends to be larger than a real humans head, and more rounded at the back. When drawing a full figure, a realistic character would tend to be around seven heads tall, as in they are seven times as tall as the size of their head. An anime style character tends to be around eight heads tall, with their legs covering about four and a half heads length. The lower leg, below the knee, tends to be longer than the upper leg, whereas in realistic human anatomy, it is the other way round, or the two are roughly the same length.

Anime styled characters generally have thinner necks than realistic human characters, and longer fingers. Arms follow normal human anatomy, wherein the elbow should sit just above the hips, and the tips of the fingers would finish mid way down the thigh.

The details of anatomy, whether you follow the more anime styled anatomy guidelines or prefer to use the more realistic human proportions, mostly comes down to personal choice, and what feels correct in the eyes of the artist. If the drawing is in proportion with itself, and the chosen pose is physically possible, then the artwork is certainly on the right track. 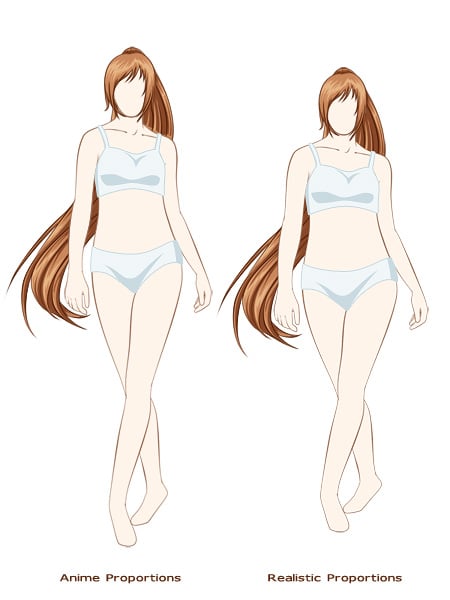 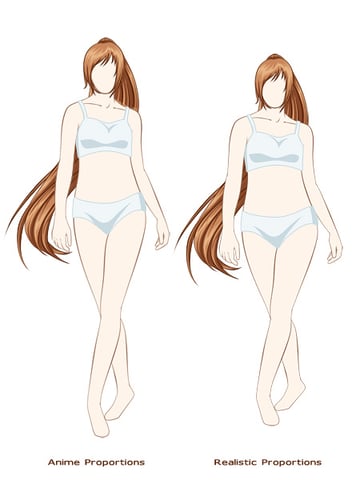 After mastering the art drawing in the anime style, an artist may wish to move toward adding color to their newly created figure. As with most styles, there are various ways to color and shade, but this article will focus only on two of the best known, and further tutorials will cover other shading styles.

The first of our styles is called "cel shading". This style of shading suits the vector media extremely well, as cell shade requires blocks of color and clean, crisp edges.

Cel shading is popular in the anime style, and is the most commonly used form of shading in the actual anime cartoons, most likely due to its simplicity and the ease of moving the blocks of color for each frame of the character's movement.

Essentially, the shading is added only in the darkest areas, and usually just one layer of shading is used, often coupled with a small amount of highlighting to give the drawing more dimension, and help the direction of the light source to really be made clear to the viewer. With such bold blocks of color, knowing the source and direction of the lighting is important, as a mistake can stand out fairly easily. 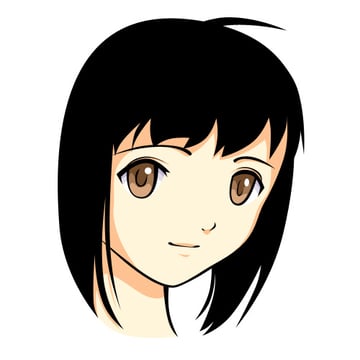 Moving forward to screen tone, the other shading style included in this article, which is a monotone style using only black and white, and is most commonly found in the printed manga you'll see in book stores. This technique uses different patterns of black dots, or other shapes such as crosses, to create various shades of grey, used to show light or dark areas, or to differentiate between textures. They're very easy to make, as they simply require a small shape of black on a white background, repeated as a seamless pattern.

This style of shading suits vector well, as it can look fantastic when viewed at a large scale from a distance, so would really work well for wall art and banners. On the other hand, it can also work on a very small scale, such as in graphic novels and other similar printed media, and so vector's infinite scalability provides enormous scope for an already useful method of shading. 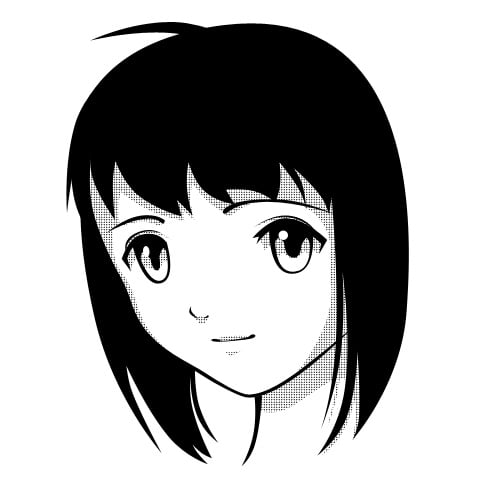 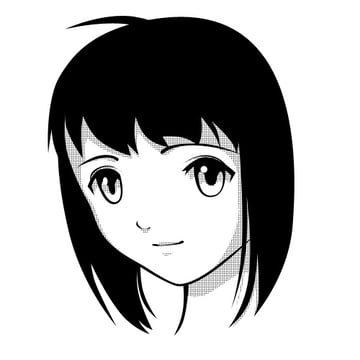 Once you understand the basic theory behind working on characters in the anime style, you can focus more on the layout and overall look of the final product. This includes composition, angle and background, as well as the layout of the character itself.

When it comes to the anime style, you can be a little more free with what may be possible, particularly when it comes to physically impossible ant-gravity hair styles and intricate clothing designs, both of which are fairly popular within this style.

Considering composition, do you want the character to be in the center of the canvas, looking straight forward? While sometimes that is indeed the way to go for certain pieces, more often than not, that would produce a somewhat dull overall look, even compared to a very simple change such as moving the figure to one side of the canvas, or creating the artwork from a different angle, profile view perhaps.

You'd need to think about where your character is and their environment, as a female character with her hair blowing in the wind would look out of place if she was then placed in a library, for example.

It's always best to sketch out your ideas and be clear on your setting before starting the work on creating the character. The exception to this is if you plan to create a piece where the background is not a particular setting, but is made up of colors and shapes instead. 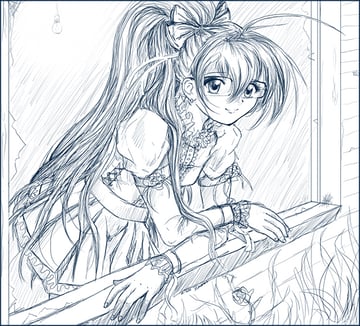 Why create Art in a Manga Style?

The appeal of the anime style is it's versatility, particularly in terms of expression and character design, and also that many fans of the style find it a satisfying and enjoyable style to draw in. The anime style first became popular due to aired anime cartoons and the manga novels that are widely available, but has since become a fandom in its own right, and many artists creating in the anime style don't watch anime or read manga, but create their art in this style purely from the love of it. 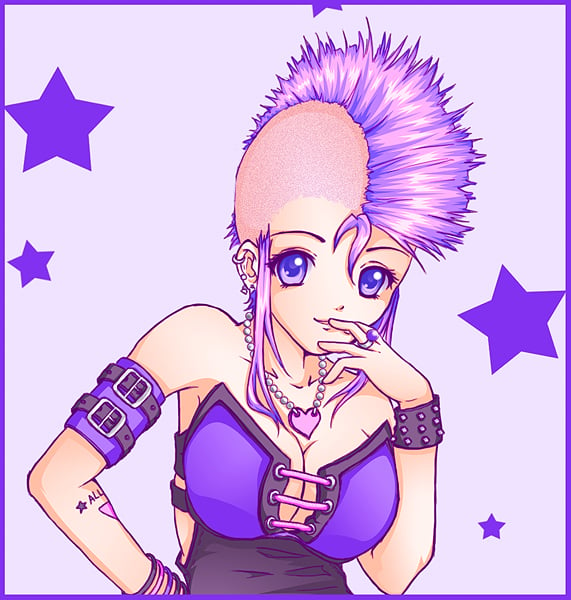 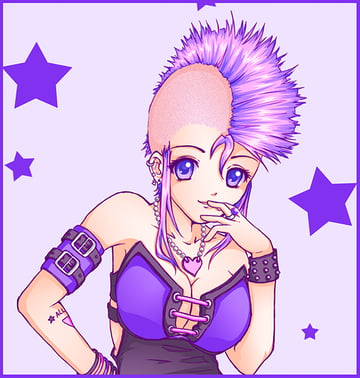 Manga and Vector, a Perfect Fit!

The vector media and the anime style work together brilliantly for many reasons, but particularly for the sharp, clean lines and the ability to create beautifully smooth gradients. The ability to create painted style backgrounds in Adobe Illustrator is also great for the anime style, as many anime artists prefer to use simple cel shading for their characters and foreground elements, and paint beautiful semi-realistic backgrounds, adding a great contrast, and extra interest to their work. This style has also come from cartoons, and not just anime cartoons, as various Disney films are also a prime example of this foreground-background contrast. It's likely to have originated from the fact that the backgrounds did not have to move in the animation, and any moving objects were drawn and colored in a much more simplistic fashion.

Other background coloring techniques found in the anime style also include the same cel shaded style as the character, though sometimes using gradients as well to help soften them and keep the focus on the subject of the artwork; screen tone backgrounds which are generally used when the rest of the artwork is also shaded in this method, and line art backgrounds can be found with the screen tone foreground as well. It's not likely to find a mix of color and screen tone, though. 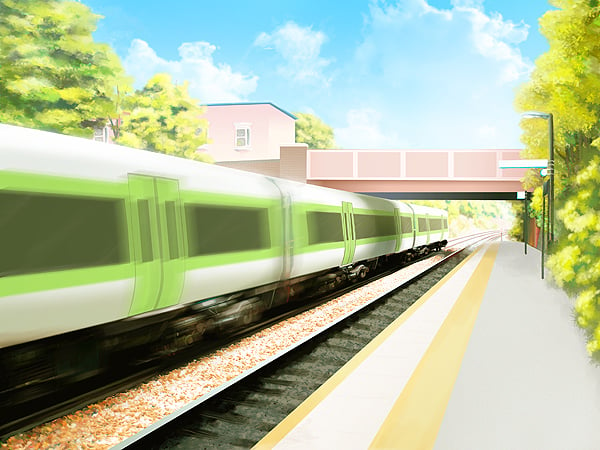 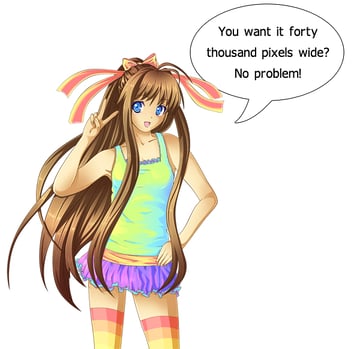 So to recap - what is the anime style, exactly? It's a style of cartoon art that originates from Japan, where the key factors to defining the style mostly lie in the character's facial features and facial structure, though other areas to consider are the hair, head size, figure height and elongated anatomy.

There are various sub-styles within the blanket term of the anime style, and one's own artistic influence on the style can create their own personal sub-style.

It's a fun, creative style with loads of possibilities, particularly when introduced to the medium of vector which, as discussed, can create even more possibilities, both on a general artistic style level and on a professional level.

With that, I thank you for reading my article, and I hope you'll be looking forward to my future tutorials on drawing in the anime style. 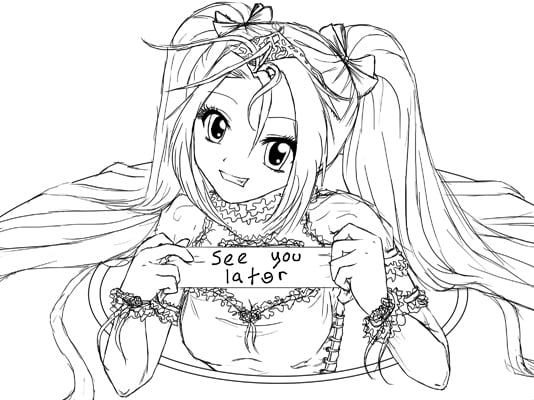 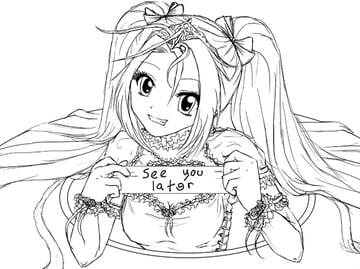 Dean Carianas-Mannar
Dean Carianas-Mannar is an anime artist from central England. He started drawing in this style in 2006, and has been using digital media since 2007. When he isn't drawing, he can be found playing tennis, supporting charities, and hanging out with his pet dog and cats.