Affinity Photo isn't the first photo-editing program to claim it can stand toe to toe with Adobe's Photoshop for a fraction of the price, but it may be the first to actually back up that claim with pure, uncompromising photo-editing power!

And with a one-time fee of $50 USD, it can be much more financially appealing than Photoshop's $10 USD monthly subscription.

Today, I will be comparing and contrasting the basic functions of each program, focusing on the fundamental tools that you would use day to day.

So come take a look at Affinity Photo from the perspective of a long-time advanced Photoshop user!

The first thing you may notice is that Photoshop's and Affinity Photo's interfaces are very similar. That's great for anyone looking to possibly make a switch from one to the other, like me!

Just like in Photoshop, Affinity Photo allows you to arrange your different modules however you want, with one exception: you can't move your Tools module in Affinity Photo.

Affinity Photo makes up for it in a big way, however, by letting you customize and arrange the individual tools themselves! Something Photoshop has never allowed you to do, this is a big win for Affinity Photo in my book.

Go to View > Customize Tools to mix and match your own Tools panel. You can even choose how many columns you'd prefer! 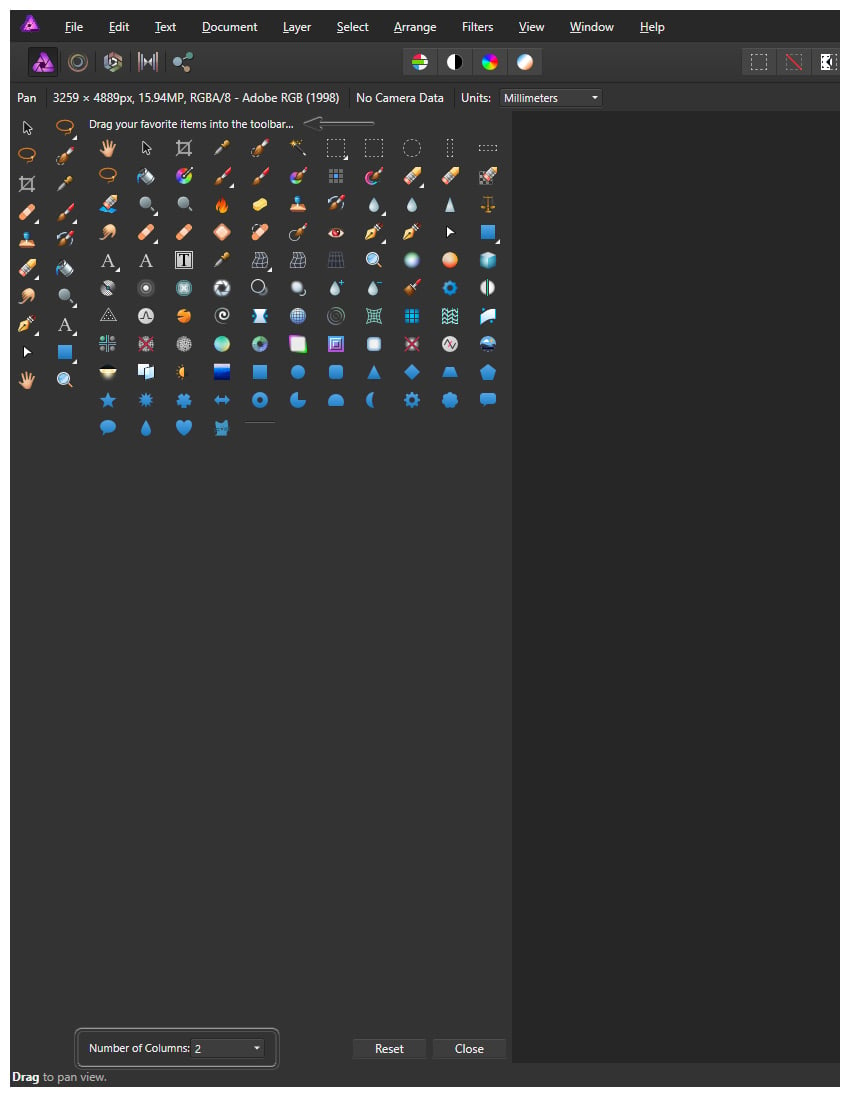 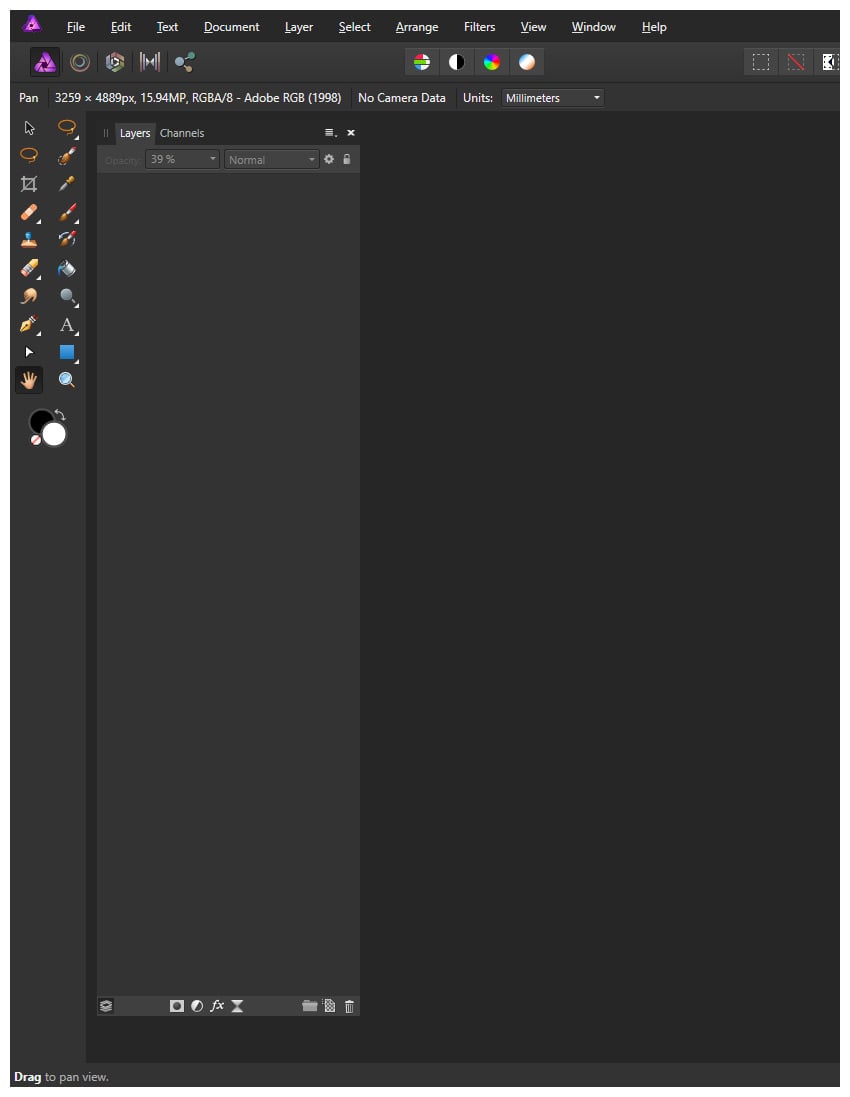 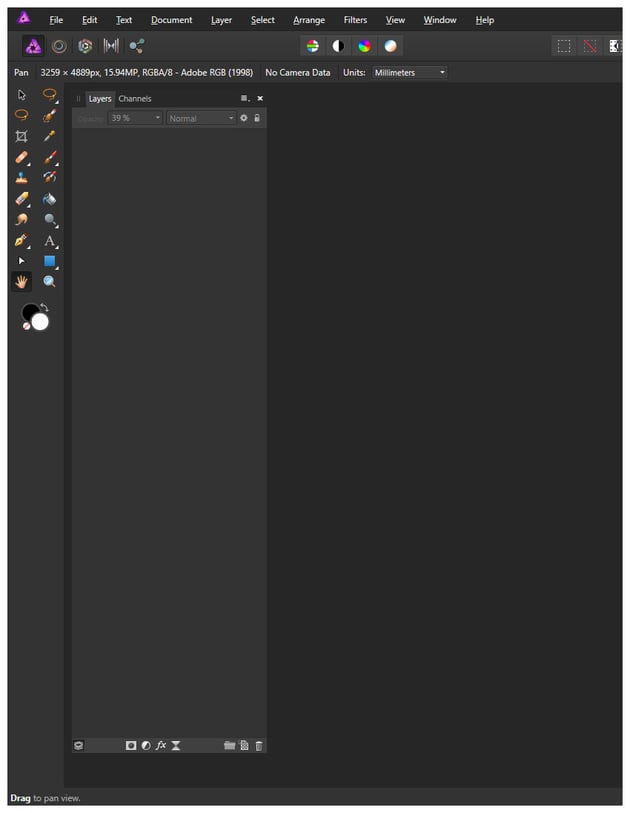 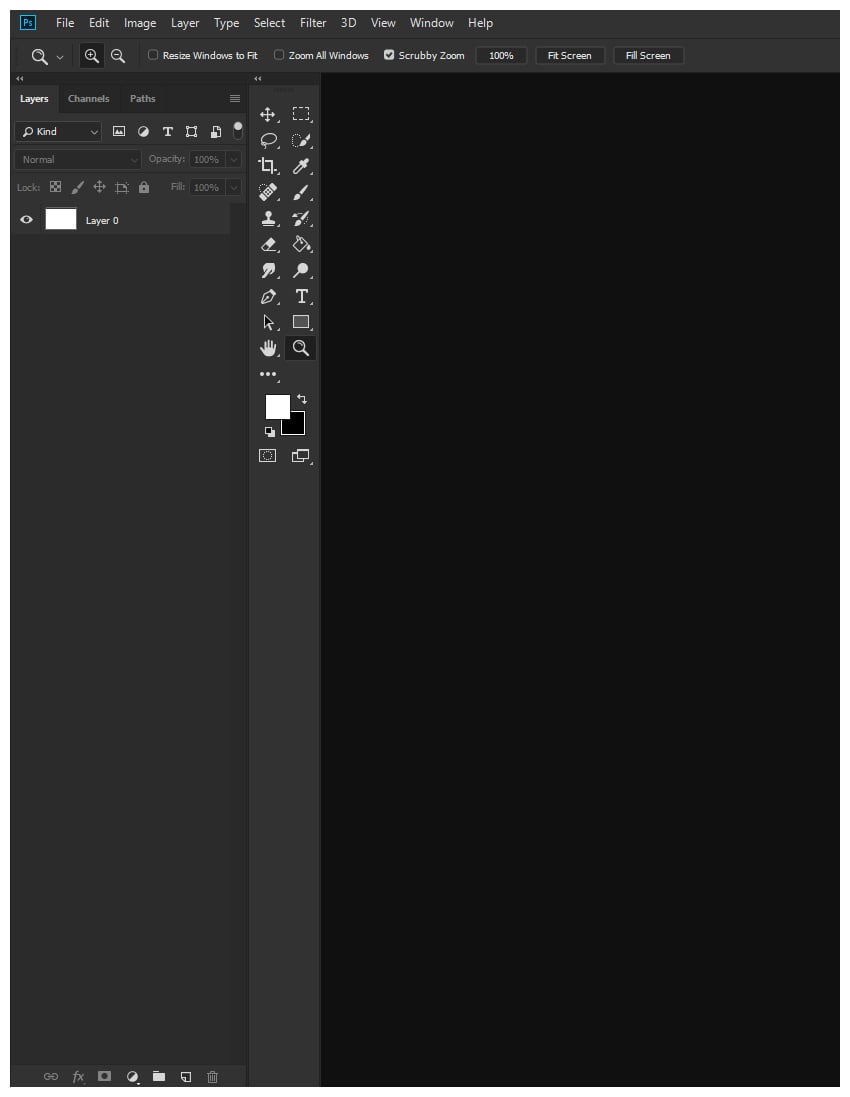 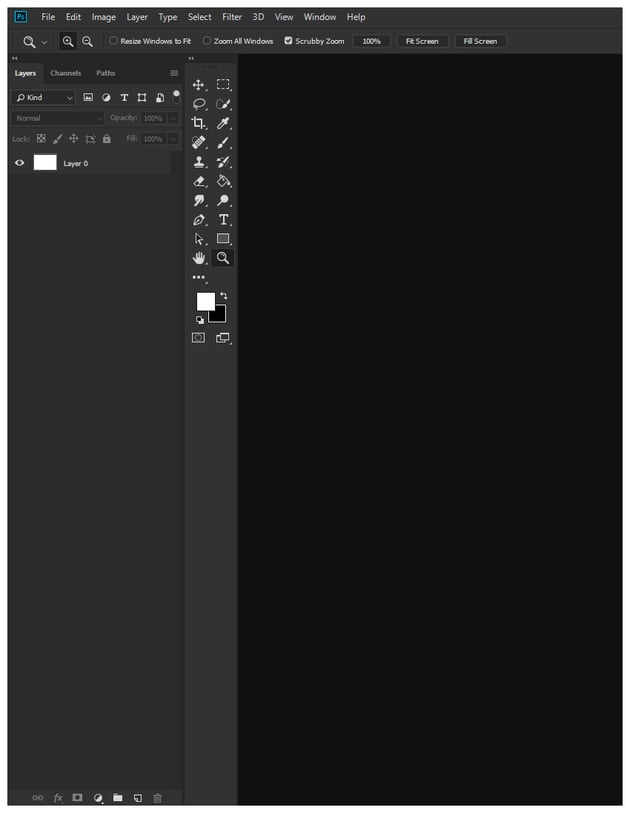 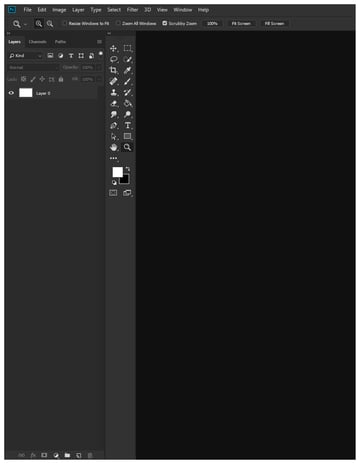 I'd like to note that I usually have the top Toolbar in Affinity Photo hidden, which you can do by going to and unchecking View > Show Toolbar. However, I turned it back on for the sake of this article.

Do note that you can also customize the toolbar, which is very handy! 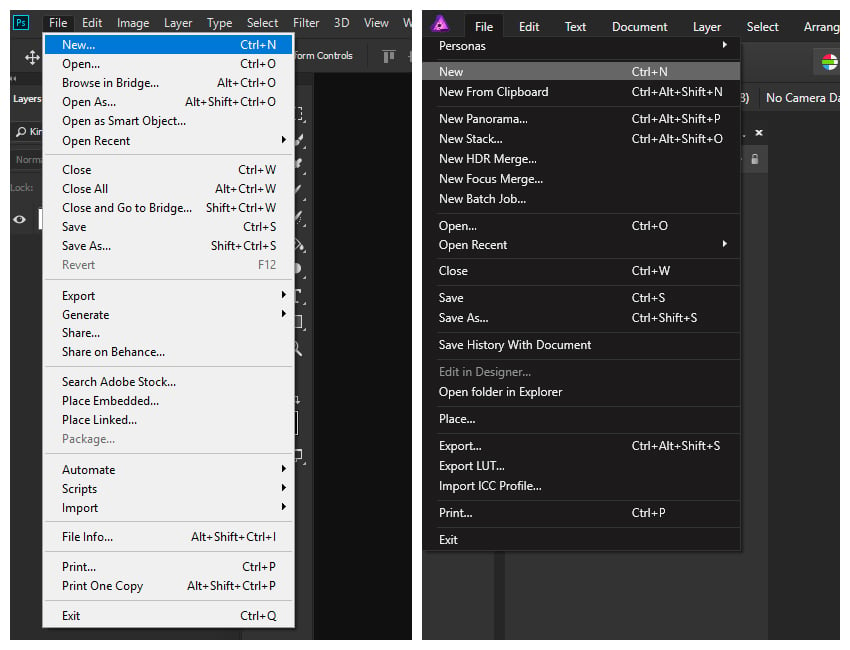 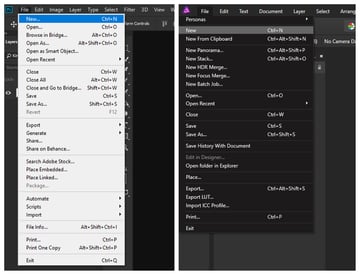 One of my favorite features of Affinity Photo is how it keeps an image's original aspect ratio by default when enlarging or shrinking an image using the Move Tool.

When transforming an image in Photoshop, you would select the Move Tool, click on one of the image's anchor points, hold down Shift, and then drag to either enlarge or shrink the image.

If you don't hold down Shift then the original ratio of the image will not be preserved, leaving the image stretched or squished, which I find you usually don't want to happen.

In Affinity Photo, it's exactly the same, except you hold Shift when you don't want to preserve the image's original aspect ratio. It's a very small but very smart change! 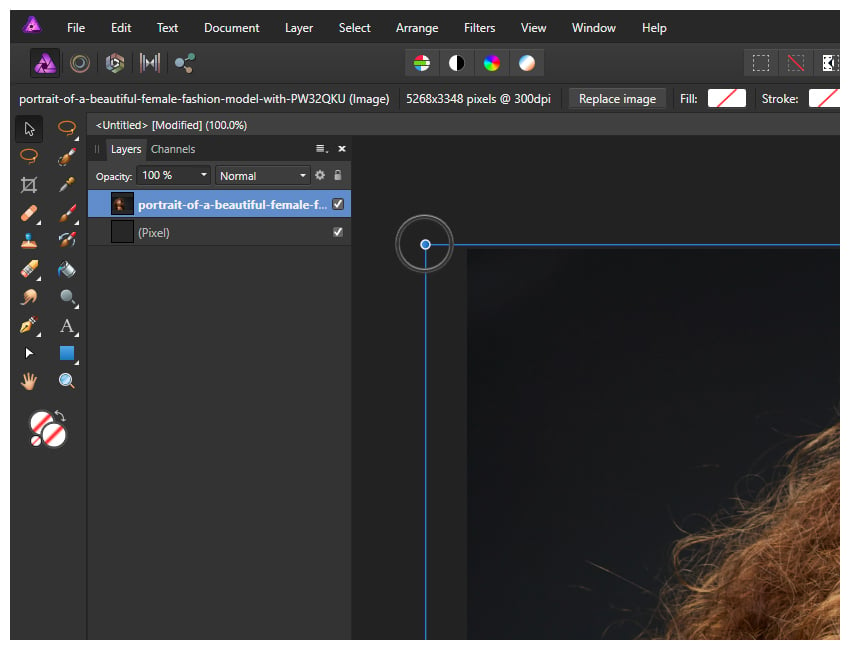 Affinity Photo has these things called "personas". You can access them by going to File > Personas and then choosing a persona, or alternatively you can change the persona by clicking the different persona buttons in the top-left corner of the Toolbar.

Each persona serves a different function, almost like some of the more in-depth filters in Photoshop. While there are five personas in total, including the default Photo persona, I am going to be focusing on the Liquify persona as Photoshop also has a liquify function that I use very often.

In Photoshop, to access the Liquify feature, you would go to Filter > Liquify to open the Liquify panel, which opens in a new window. 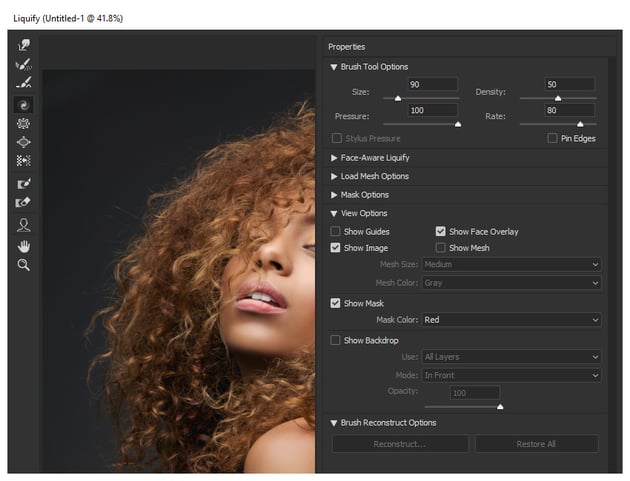 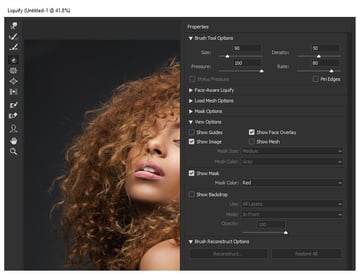 In Affinity Photo, you go to File > Personas > Liquify, or click the second button in the top toolbar, which will enter Affinity Photo's liquify user interface. You have a lot of the same options and functions as you do in Photoshop. 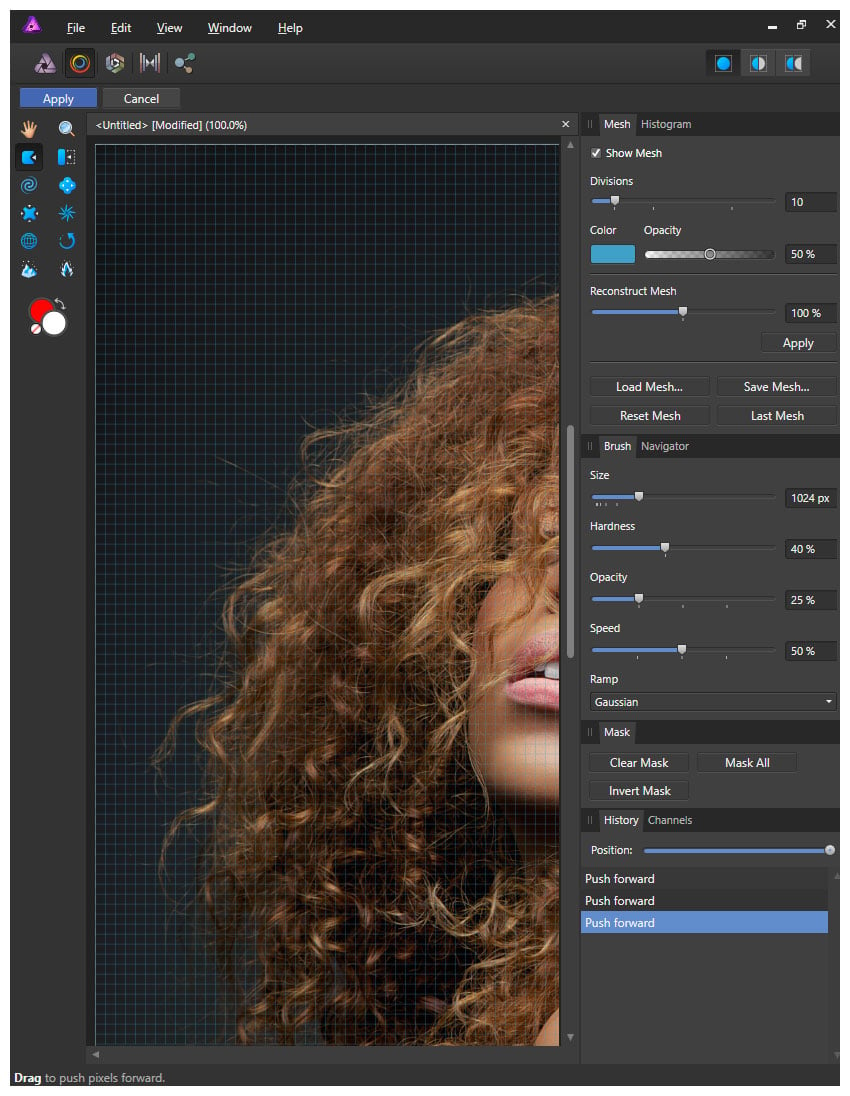 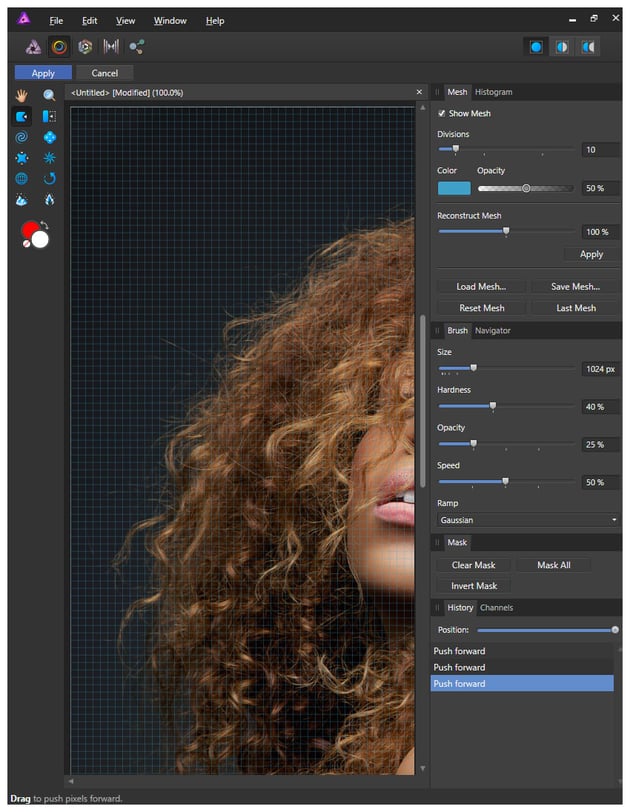 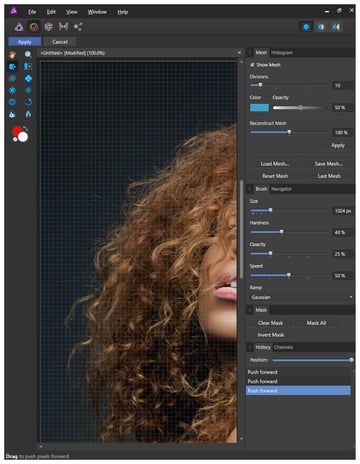 All of Affinity Photo's personas activate a new user interface, almost like opening a different program altogether. This makes things a bit more organized and user-friendly; however, Affinity Photo is noticeably slower while in the Liquify persona.

In fact, I do want to note that Affinity Photo is all around slower than Photoshop.

Affinity Photo's and Photoshop's Layers panels are almost identical. You have your Opacity and Layer Modes on top and the various layer effects, masks, and a Create New Layer button, or Add New Pixel Layer in Affinity Photo, in the bottom-right of the Layers panel.

You can hide layers in Affinity Photo by hitting the checkmark on the right, similar to hitting the eye icon to the left of layers in Photoshop, and you can arrange the layers by dragging and dropping, just like Photoshop. 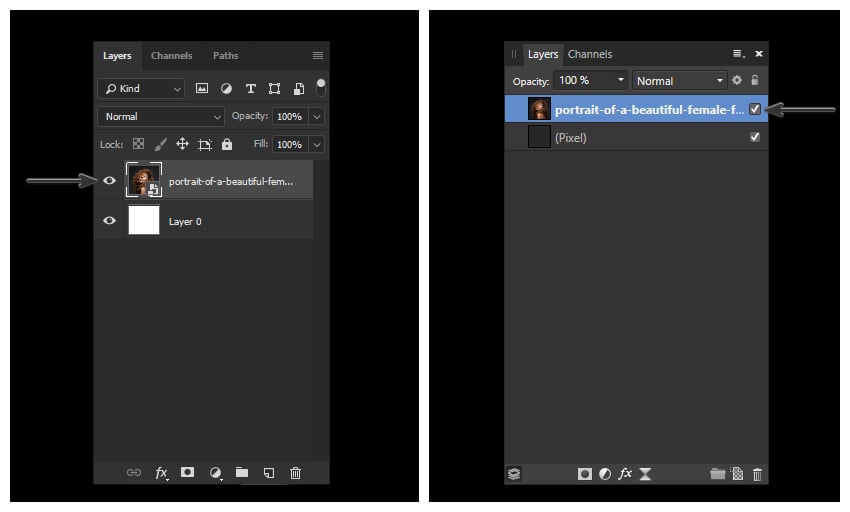 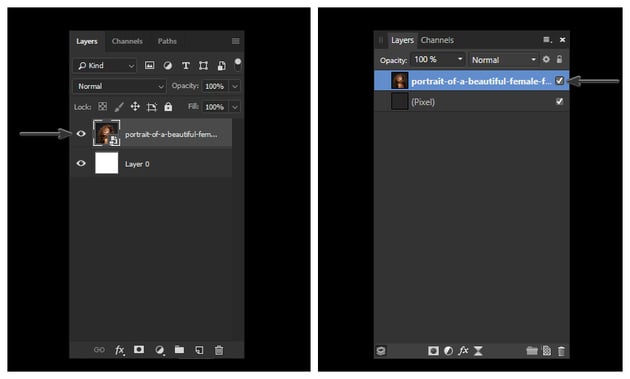 You can collapse clipped images for a cleaner-looking Layers panel, though. This means creating fewer groups, which is a nice feature.

One more disadvantage is that when you double-click on layers in Affinity Photo, no Layer Style panel opens like in Photoshop, leading me to believe there is no Blend If function in Affinity Photo, which is something I use often.

Affinity Photo's and Photoshop's layer mask features are virtually the same. You can add a layer mask to any layer by hitting the Add Layer Mask (called Mask Layer in Affinity Photo) button at the bottom of the Layers panel. 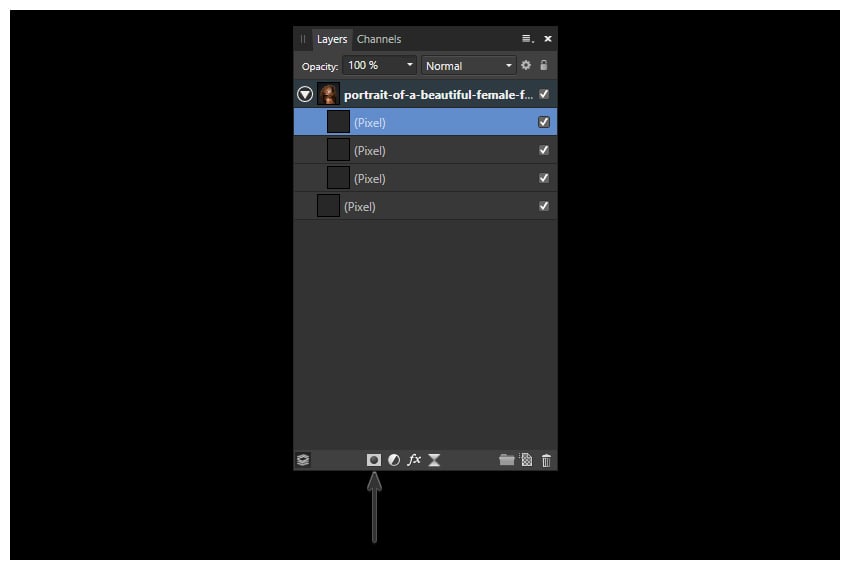 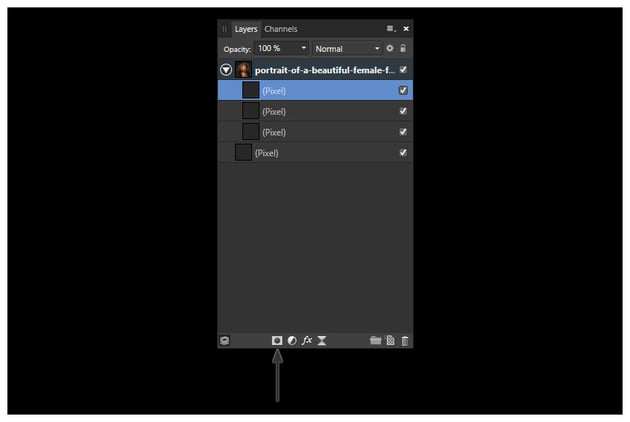 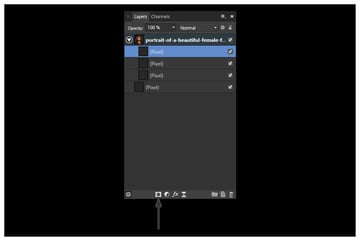 Affinity Photo has an exact equivalent to Photoshop's Lasso Tool called the Free Hand Selection Tool, as well as the various "shape" marquee tools that go by the same names in both programs: Elliptical Marquee Tool, Rectangular Marquee Tool, etc.

From what I can tell, Affinity Photo does not have an exact replica of the Magnetic Lasso Tool. And while it doesn't technically have the Polygonal Lasso Tool, instead what you do is hold Shift while using the Free Hand Selection Tool to get the same polygonal effect.

While both programs have a Refine Edge, and they are somewhat similar, this is where Affinity Photo differs from Photoshop and lacks a bit for me.

To use the refine edge feature in Photoshop, you'd make your selection and click Select and Mask to open up Photoshop's Refine Edge interface. The options are very straightforward and include Edge Detection with a Smart Radius option, which I find to be a key feature in extracting hair, fur, and cloth.

In Affinity Photo, the process is similar. You make your selection and click Refine in the selection tool's toolbar. The refine options are a bit less clear in what they do, and the tool seems to lack any kind of edge detection options. It does, however, have both the Smooth and Feather options, which are two of the main settings you would use.

I was very happy to learn that the Pen Tool in Affinity Photo is almost identical to the Pen Tool in Photoshop! It functions exactly the same, which also means you could use a Photoshop Pen Tool tutorial to learn how to use the tool in either program.

Affinity Photo offers all the same bells and whistles as Photoshop does when it comes to its brushes—including a well-sorted array of default brushes.

Affinity Photo has Opacity, Flow, and Hardness settings, as well as a very impressive Stabilizer option, leading me to believe that digital painters would get along very well in Affinity Photo.

While it comes with a high variety of default brushes, Affinity Photo also lets you import brushes just like Photoshop. One of the main questions I'm sure a lot of people have is: "But can I import my current Photoshop brushes? Do I have to find all new brushes?"

I am happy to say yes, you can use Photoshop brushes in Affinity Photo! That's a big plus for someone considering transitioning.

I personally use a graphics tablet, and so do many of you out there, so I was curious how well it would play with Affinity Photo. This is where Affinity Photo really surprised me as I found the Brush Tool to be not only smoother but with a higher level of pressure sensitivity!

Hit the Force Pressure button in the Brush Tool's toolbar to turn on pen pressure.

Affinity Photo has a total of 11 filter types available, located under the Filter menu just like in Photoshop. While this is fewer than Photoshop's 18 total filter groups, Affinity Photo makes sure to give you the filters you really need.

Affinity Photo offers an impressive array of adjustment layers—a few more than Photoshop offers, in fact. Affinity Photo has all the favorites such as Curves, Gradient Map, and Color Balance, and it also brings some new adjustments to the table, with my favorite being the Split Toning adjustment!

One of the personas mentioned before is the Exporting Persona, which is a whole interface dedicated to exporting your images. However, I prefer to just go to File > Export, just as you would in Photoshop.

9.2 Exporting to or From Photoshop

It's the same with opening a Photoshop file in Affinity Photo, which you can do by dragging and dropping a PSD into Affinity Photo—everything but the adjustment layers will work completely normally.

Affinity Photo proves itself to be just as capable a piece of photo-editing software as Adobe Photoshop, in my opinion! And while Photoshop still beats it in some areas, there are things I believe Affinity Photo actually does better.

Ultimately, I recommend Affinity Photo to beginner and upper intermediate Photoshop users who may be looking to save money but don't want to sacrifice power or who are simply frustrated or overwhelmed with Photoshop's unintuitive user interface.

I would also recommend Affinity Photo to anyone new to photo editing who has yet to dig their teeth into any single photo-editing software.

I'm personally excited to get to know Affinity Photo even more and continue to discover all it has to offer! You can join me by checking out some of our other Affinity Photo tutorials!

Affinity PhotoAdobe Photoshop
Did you find this post useful?
Yes No
Would you like to provide feedback (optional)?
Cancel Submit

Abbey Esparza
Digital Artist - Texas, USA
I’m a mixed media artist and freelancer with over ten years of experience in digital art. I love to take fashion-forward modern-day photography and transform it into the unusual and macabre. But while I typically like to play with surreal themes, I'm experienced in various styles and genres! Including child-friendly fantasy and colorful pop art. In the last five years of my career, I have found a passion for sharing my knowledge and creating educational content showing that anyone can be a successful artist no matter your preferred genre!