Sanjay Patel is a animator and illustrator from Southern California who was born in the UK. Sanjay works as a supervising animator and storyboard artist at Pixar Animation Studios, where he has worked on numerous films, including Monsters, Inc, A Bug's Life, Toy Story 2, Ratatouille, The Incredibles, and Toy Story 3. He has also written and illustrated books on Hindu mythology and he loves how images can tell a story. Read more about Sanjay and his brilliant work in this interview.

Q Hello Sanjay, can you tell us a little about yourself? When did you first start drawing and become interested in illustration?

I've been drawing since I can remember. It was the only thing I was ever good at. Growing up I drew homework assignments for friends and then I drew from comics. I was especially interested in saber tooth tigers, and dinosaurs and such. 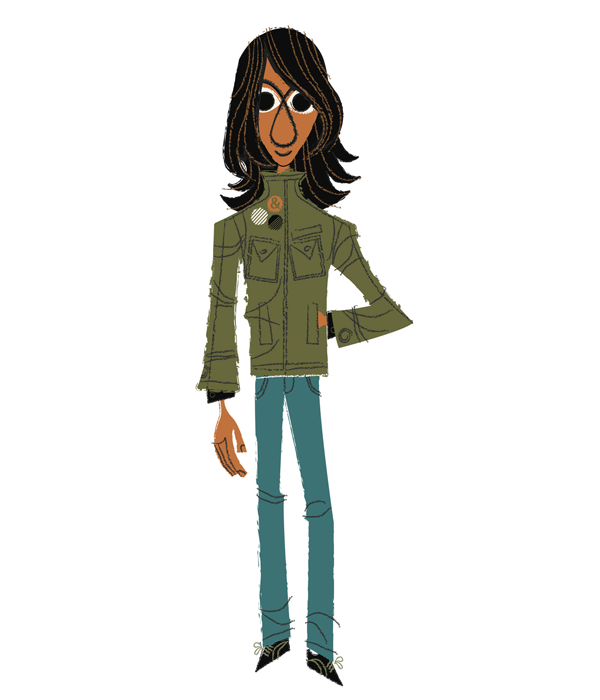 Q Did you take any formal education in this field or are you self taught? What tools and applications do you mainly use? What does your workstation look like?

I think in the second grade a teacher told me that I would be a very special artist and gave me a wonderful collection of vintage Superman comics. From there my education really kicked in with my high school art teacher who opened up my eyes to the renaissance. From there I went to Cleveland Institute of the Arts, from there I went to California Institute of the Arts. Every bit of professional art training has been worth its weight in gold. In terms of tools I love paper, pens, scissors, and pencil. For the last five years I switched to using the computer a lot. I discovered Adobe Illustrator and fell in love with it. But I still start everything with pencil and paper. My work station is very, very neat. I hate a messy work space.

Q What's your role as an animator in Pixar? How long have you been working there? How has the experience been working for films like, Monsters Inc, A Bug's Life, Toy Story 2 and 3, The Incredibles etc.? What is a typical workday for you?

As an animator my job is to understand a given scene and the characters within it. Once I have a clear idea of the attitudes and emotional states of mind of the characters I block out basic physical choreography for the scene. From there I work closely with the director to iterate the movements of the body and props to covey a specific story point.

I've been at Pixar for fourteen years. Each film has been a great opportunity to learn and fail with amazing professional artist. On Monsters Inc and Bugs Life, I learned a lot about the subtly that you can capture in the eyes and the eye lids of a character. On the Toy Story movies I learned so much about story boarding working one–on–one with Joe Ranft. I also learned so much about understanding the subtext of dialogue and the circumstances of a scene. On the the Incredibles all that I thought I knew was relearned. I learned to approach storyboarding form a much more live action point of view especially in terms of camera angles. The mechanics of my animation were also scrutinized and made much stronger.

I arrive around 9am, head right over to dailies with the director and the animation team. We review one or two animators work for over an hour as a team. We typically tear it to shreds with the intention of making the scene more entertaining. The rest of the day we are left alone to work till the next days dailies. 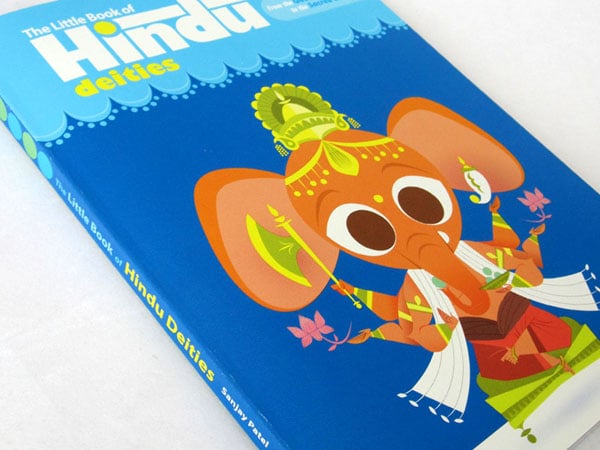 Q How did you get interested in becoming an Author? Was The Little Book of Hindu Deities your first book? What led you to choose the subject on Hindu mythology? How did you get the idea to illustrate Hindu deities in colorful anime style?

I'm not interested in authoring books, I am really into images telling a story. From there I got interested in retelling ancient Hindu myths in a simple an relatable way. Yes, it was my first officially published book by Penguin Books. My parents are Hindu and I was raised with there faith all around me. Since my background was in animation, the flat colorful aesthetic was a natural fit. I also took a lot of inspiration form the cute designs of Sanrio. 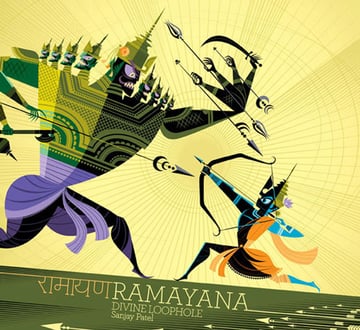 Q Tell us about your book, Ramayana: Divine Loophole. How much time did you put into researching for this massive project? Are you also a writer?

There were a lot of different impulses that led to the decision to tackle the Ramayana. In many way The Little Book of Hindu Deities was a success and at the same time really didn't capture the full scope of my talent. As I began to read the Ramayana it became very clear that the mythology was loaded with a visually rich world. It was also very clear that no one has tried interpreting the epic story in pictures and illustration with a modern graphic flair. Or at least in a visual language that was in line with my aesthetics and love of mid-century animation. 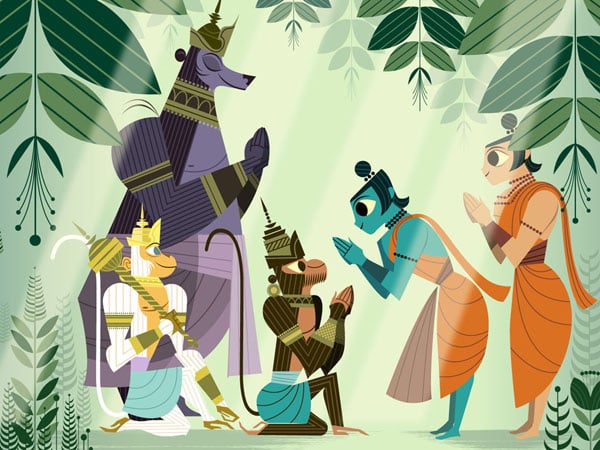 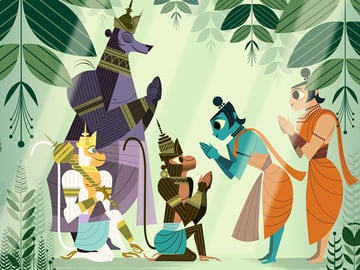 Q How long did it take you to create the illustrations for the book on Ramayana which features over 100 colorful illustrations of the cast of characters who make up the epic tale? What was your workflow for creating these illustrations? What were the challenges involves and how did you overcome it? Did the final execution match your initial idea?

I'm almost embarrassed to say this but I spent close to four years on the project. It took me the better part of a year to read different translations of the story and write my own summarized version. After selling both my manuscript and a full black and white dummy I took a year sabbatical from PIXAR to work on the ridiculously detailed vector illustrations full time. After working day and night for over a year and not leaving my apartment for days at a time I eventually ended up burning out. Luckily I discovered yoga and therapy and was able to finish the project.

Once a pencil sketch was done which took about two days I could jump into Adobe Illustrator and start building vector shapes, which took another three days depending on how complicated the illustration was. If I was lucky I would get things right, but in almost every case I re-did things dozens of times.

The biggest obstacle was of course the scope of the project, The Ramayana has dozens of character and locations, mega war scenes and complicated crowd illustrations. But somehow I was able to get things running fairly quickly that is until till I decided to redo everything top to bottom a few times. I kept fighting to work in a design style that was cute and silly, when the Ramayana is anything but that. As a reaction of too much cute I ended up turning the illustration into something much more grown up and stiff. Eventually the design pendulum settled somewhere in between cute and boring. Somewhere that I hope captures the action and drama in a fun modern style that honors this great mythology. I wanted the book to be cute and silly like a Richard Scary version of the Ramayana. Instead I think I ended up with a weird Charley Harper, animation hybrid. Hopefully the combination works. 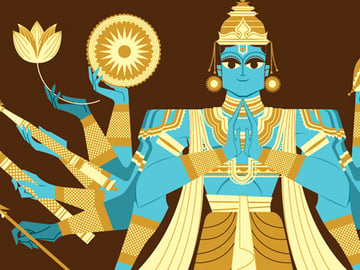 That's really hard to say, I look back at it all and see how everything has built upon everything else I've done. nothing is done in isolation. So its hard to choose anyone without acknowledging the impact everything has had. 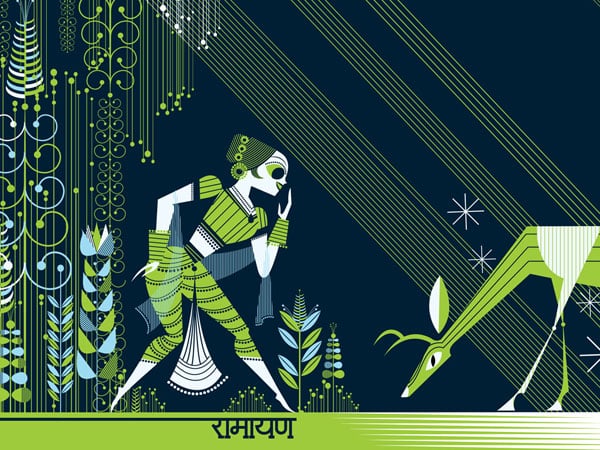 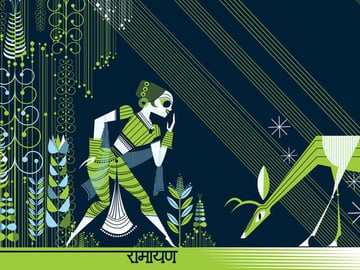 Q What do you enjoy most, working on animations or on illustrations? Why?

I love them both. Each discipline activates difference parts of my mind. Animation on feature films is fun and terrible because it takes an army of people to complete. Illustration is really satisfying in that I have a ton of control. But it also seems increasingly irrelevant and in many a very limiting way to communicate subtle ideas. 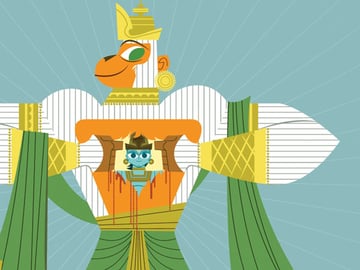 Q What are your biggest design influences or inspirations, any particular artist(s) or website(s)? How do you recharge your creative batteries?

My office at Pixar is covered in Charley Harper pages. I actually bought two copies of the massive monograph that Ammo Books put out. I took one of the books and had it professionally cut and started using all the pages as wall paper for my office. So of course there is a ton of Harper in my everyday life and in my Ramayana. Like many other Cal Arts students I love mid century illustration. My favorites are Saul Steinberg, Provensons, & Sasek. Of course there are tons more artist that I love like Peter Arno, Tezuka, Steig, Boutavant, Lindberg, Wyeth,… And of course the great master Mr. Bill Watterson and his Calvin & Hobbes. 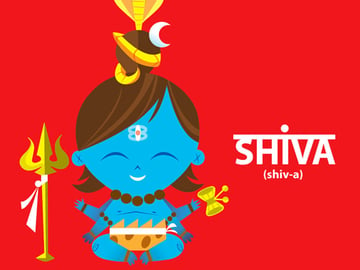 Q Sanjay, thanks for the interview. Would you like to give any tips or advice to aspiring designers and illustrators?

The best tip that I can give is dedication, focus, and hard work. 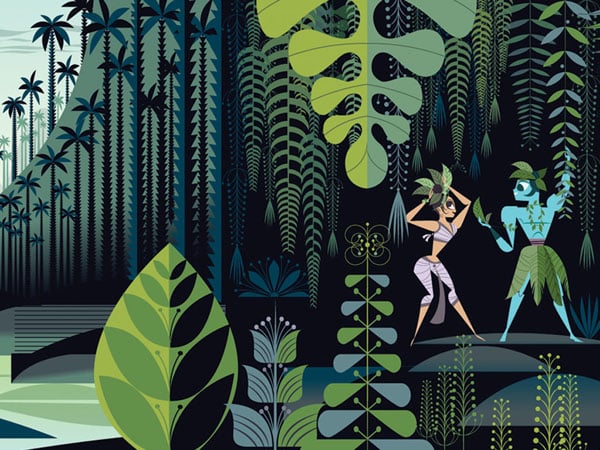