The histogram is one of the best ways to check for accurate exposure in the camera, and yet it's underused by many photographers. Use this tutorial to learn to use histograms in-camera and as part of further Photoshop processing.

1. Understand What the Histogram Represents

A histogram is a two-dimensional graph that most digital cameras record for each exposure taken. It's a simple graph - it keeps track of all the tones in a photograph, from dark (on the left side) to light (on the right).

Spending time looking at histograms, whether in the display of your digital camera or on the computer screen, will make them more familiar and a useful tool for taking exposures. Histograms look very different depending on the scene, the color and the light in each photo.

Here are some examples of different photos and their histograms. You can see the difference in the histograms of these three based on their backgrounds, environments, object colors and light. 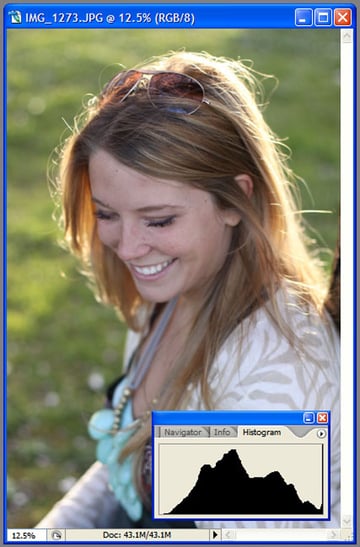 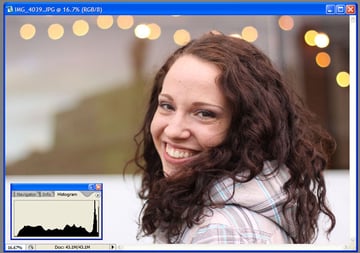 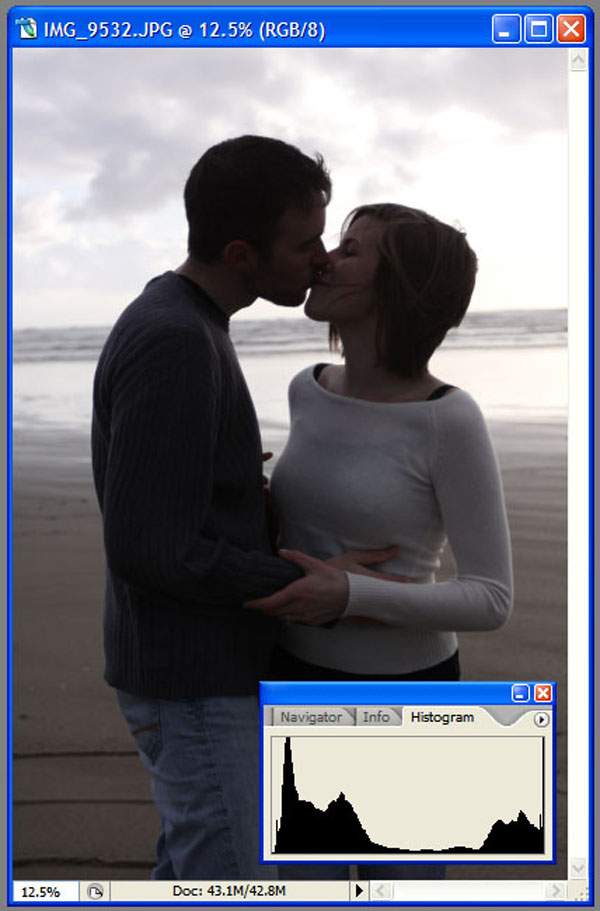 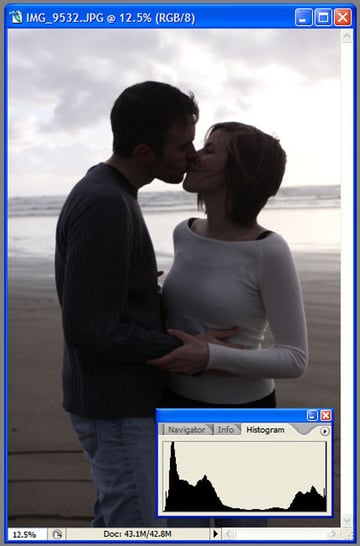 2. There is No Such Thing as a "Correct" Histogram

One thing to avoid is to try to emulate a histogram - they look very different based on what's in the photograph. If you photograph someone with dark clothing or hair, for example, the photo's histogram is going to skew toward the left of the graph, whereas the opposite is true with light colored clothing, background or light. Even if the histogram is heavy on one side of the graph, or has unusual spikes, you just want to make sure your histogram has some information from one end of the graph to the other.

Look at these two examples of photographs and their respective histograms. The first is a darker image, considered low-key because of its dark background, which causes the histogram to skew to the left. 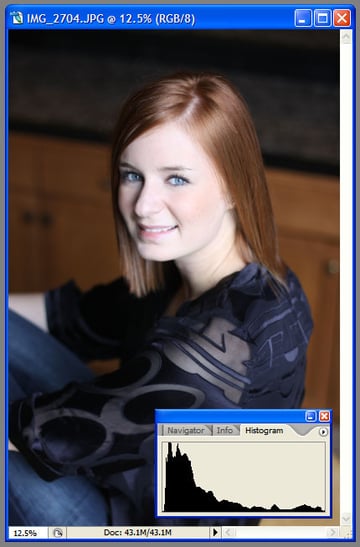 The second photograph, however, skews to the right because it is a high-key image (meaning that the background is lighter than the subject). Backgrounds can make this distinction, but so can objects in the photo. It all depends on the number of pixels in the photo that are a dark color, a gray mid-color or a light color.

While there is no such thing as a wrong histogram, there is something very important to watch for in your histograms. This is called clipping, and it occurs when the photograph is incorrectly exposed, which can lead to blown-out highlights (where no detail can be seen) or clipped shadows, where detail is lost in darker areas of the photo. Since you want detail to remain in all parts of the photograph, this is one of the most important uses of the histogram.

When highlights or shadows are clipped, the histogram will have a large slope leading up to either edge of the graph, and that slope does not return to the bottom axis of the graph before it ends. This is a sign that detail has been lost either in the whites or blacks in your photograph. If you can catch this in-camera, it will give you an opportunity to adjust the exposure and correctly expose the photograph.

In the example below, the first photograph is over-exposed, meaning too much light has entered the camera, clipping the highlights and losing details in the light areas of the photo. Next to it is the correctly exposed version, which can be created by simply shortening the exposure time by adjusting to a quicker shutter speed. 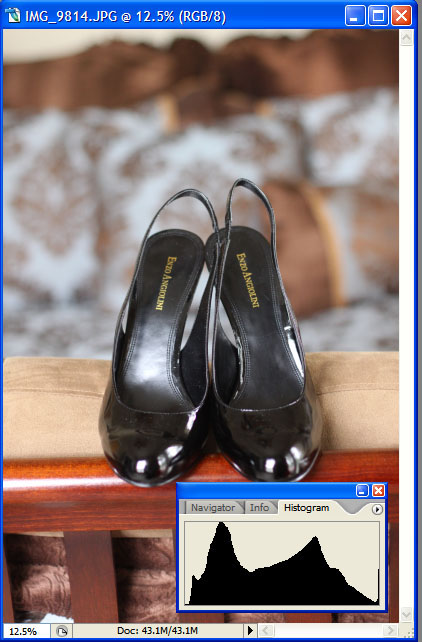 The second is just the opposite: this exposure is too dark, and has therefore lost detail in the shadow areas. To correctly expose this image, the shutter speed should be slower to allow more light in. 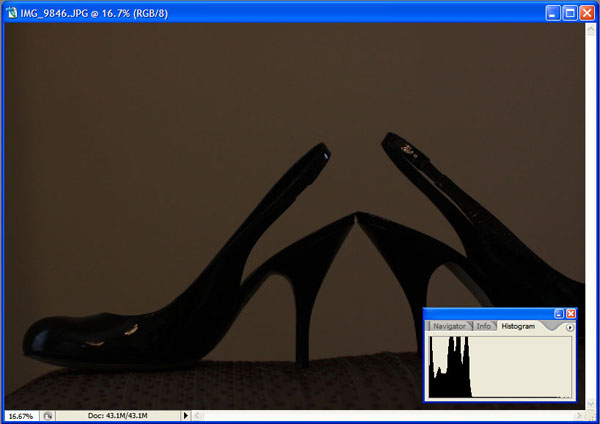 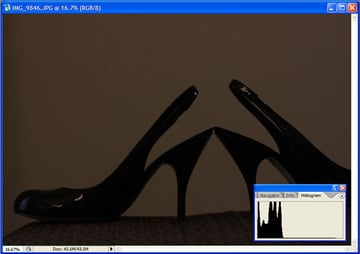 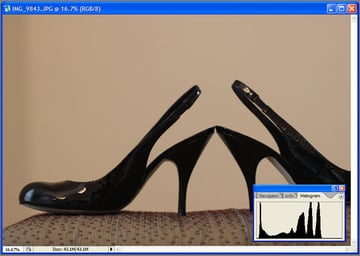 4. Adjust Your Display to Show the Histogram

While viewing histograms at the computer can tell you much information about your photos and help with editing, one of the most useful applications of being able to read the histogram is the usefulness of evaluating an exposure in the field, right after the photo is taken. This is also a great way to understand and get comfortable reading histograms quickly.

Most display modes on a digital camera's back LCD will have an option that shows a small preview of the photo alongside a small version of the histogram. After you take a photo, especially in a tough lighting situation, check in with the histogram to make sure there is no clipping and then you'll have an opportunity to correct any over-exposed or under-exposed photographs before leaving the scene.

5. Boost Contrast in Photoshop by Adjusting the Histogram Using Levels

If reading the histogram in-camera to correct exposures hasn't worked and you need to fix your exposure, it is possible to do in Photoshop. This adjustment can also be used to boost contrast in a photo where the light or scene hasn't allowed for a very high-contrast exposure.

This photo, while underexposed, is not yet to the point of having lost information in the shadows, and we'll be able to restore a wider range of tones in Photoshop. 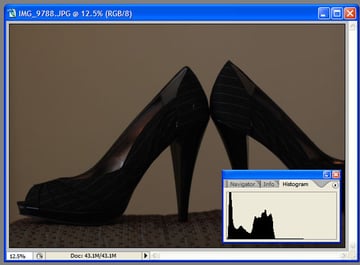 The first way to do this, and a good way for more beginner Photoshop users, is to open the Levels Adjustment window. Here you'll be looking at the photo's histogram, and there are sliders below the histogram that allow you to bring in the sides of the graph nearer to the tone blocks. This can make darks darker and lights lighter, which is why it makes for a good contrast-boosting measure.

A good rule of thumb is to slide the sliders in so that they hug the main data slopes in the graph, eliminating any areas in the graph with little to no data.

In this photo, by adjusting the slider on the right-hand side (just click and drag the white triangle) we can bring back some of the tones lost in the graph.

Notice how the edge of the graph has been moved in to where the data stops, in order to spread the information more evenly across the histogram. This results in a better-exposed photograph, with more visible information. 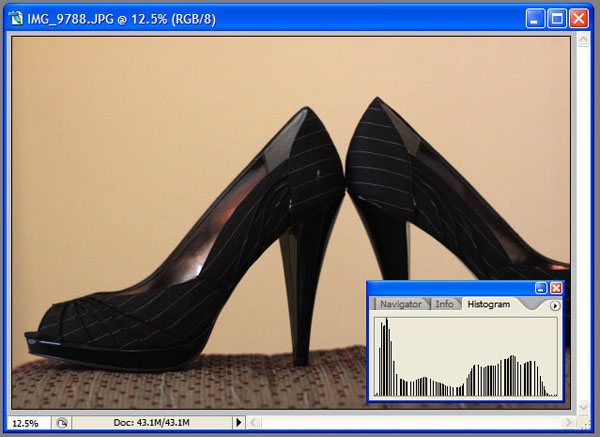 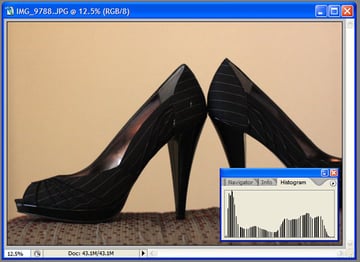 Another view to take advantage of in Photoshop is the expanded histogram view, which will show you an individual histogram for each color channel (in this example, red, green and blue). To expand this view, click the right-hand arrow button on the histogram panel and choose All Channels View.

Viewing all three color channels will allow you the added advantage of being able to correct your midtone levels closer to the as-shot levels. Here is the beginning photo, one that needs adjustment and has fairly different histograms in each color channel.

Begin by opening the levels adjustment window again, and moving the right-side slider over to near where the data starts. But notice how that shifts the histogram's midpoint quite dramatically. 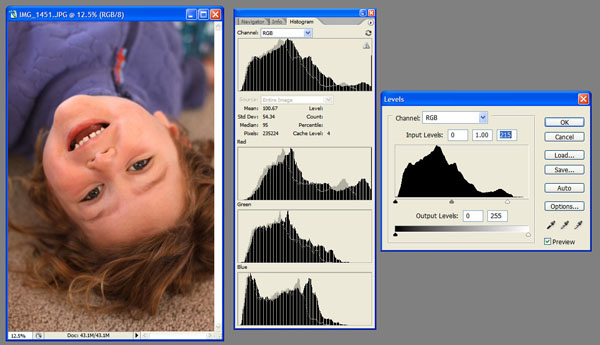 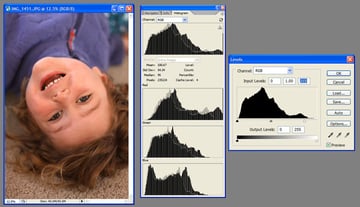 Now you can move the slider in the middle just slightly to try to align the graph with the version as-shot. This boosts the contrast while keeping the photo's midtones in place. 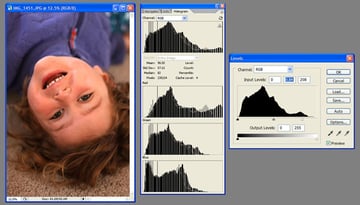 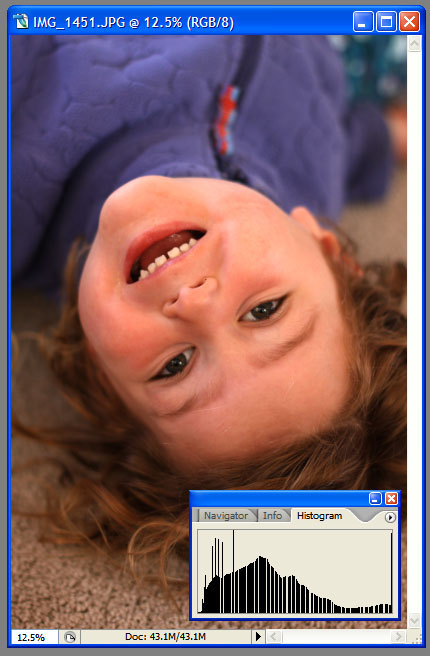 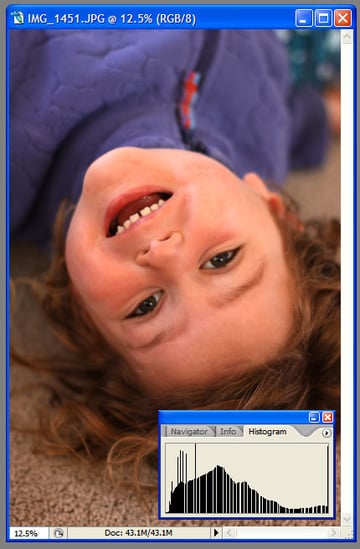 These Photoshop techniques for repairing photographs without a wide dynamic range or with exposure problems work, but remember that controlling exposure in-camera will always lead to a more vibrant result.

Sara Gray
Sara Gray is a wedding and portrait photographer based in Oregon, photographing weddings throughout the Pacific Northwest and around the world. Starting out as a newspaper journalist, she was handed a camera the first day on the job at a small newspaper and began a love affair with capturing beautiful imagery made from moments and interactions. You can see her work at www.saragrayphotography.com.