Using Gradients to Make Light and Shadow - and a Coffee Cup!

In this tutorial, we're going to use some simple circles and gradients to make a cup of coffee viewed from above. The end result isn't that useful, but the process is interesting nonetheless.

We begin with a nice pastelly-blue gradient. Note that with the gradient, I've put the lighter part in the top right. This is important because we are giving the impression that light is coming from the top right and this is will decide what direction other gradients need to go.

On top of that draw a circle and fill it with white. 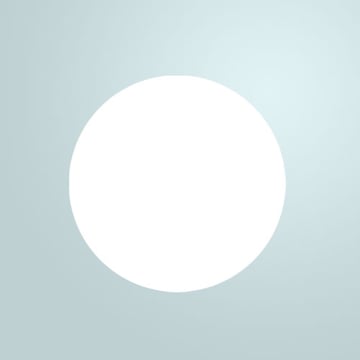 Next hold Ctrl and click on the layer to select its pixels, then go to Select > Modify > Contract and use a value of around 12px.

Then in a new layer draw a subtle light grey to white Linear Gradient from top right to bottom left.

Note that we go this direction because its the opposite to where the background light is from. This is because the dark grey instantly gives us some shadow which makes for a 3D effect. 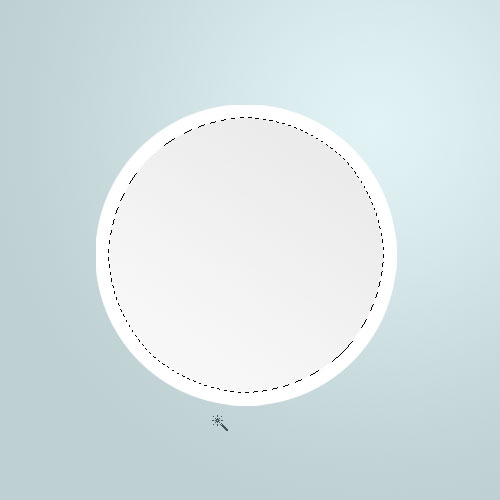 Next hold down Ctrl and select the back circle, then hold down Alt and Ctrl to select the front circle. This should give you a selection that is just the ring as shown.

Now in this ring, draw a Linear Gradient from bottom left to top right. Again this will make for a 3D look. In case you hadn't guessed, this is our saucer.

Next create a layer at the bottom and Ctrl-click the original circle layer to select it, then press the down and left arrows a few times and fill the selection with a darker blue to make a shadow for our saucer.

As you can see, the shadow is being cast by the saucer down and left, which makes sense again because the light is in the top and right.

Now in a new layer at the very top, Ctrl-click the ring layer and in our new layer fill it with white. Then without letting go of the selection, press down and left two times and hit Delete. This will leave a little white highlight. 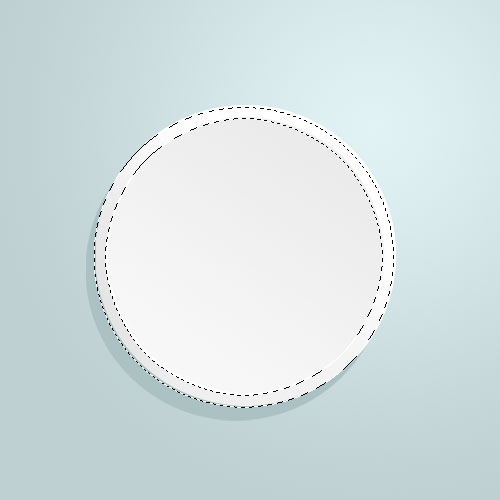 Now that we have the saucer finished, we can start on the cup!

So we create a new layer at the top, draw a smaller circle in and fill it with a very light grey.

If you haven't managed to line up your circle, its OK, just select all the layers together and then switch to the arrow tool (actually its called the Move (V) tool in Photoshop, but you probably just know it as the plain-old arrow), and you'll see at the top of your screen, there appear some alignment buttons. You can use these to align your circles together. 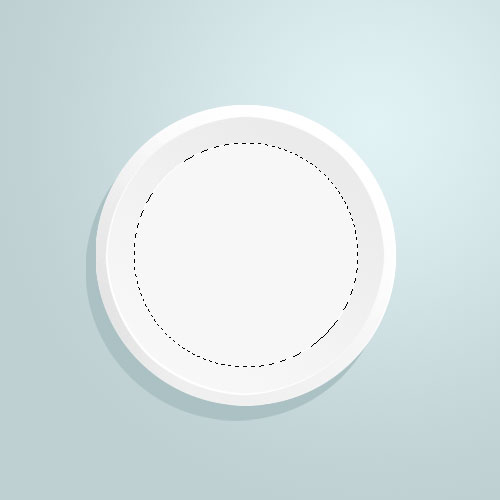 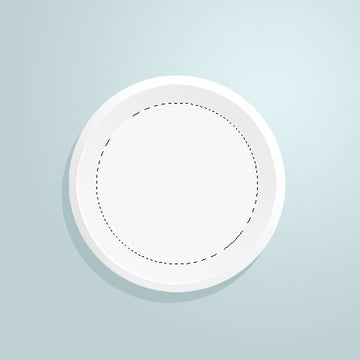 Now with the original selection still on, create a new layer and go to Select > Modify > Contract and put in a value of about 6 pixels. Then fill that layer with a dark grey to light grey Linear Gradient from top right to bottom left. As with the saucer, we are again making shadows that are consistent with where the light source is in our picture.

Now in a new layer, draw another circle and fill it with a linear gradient from top right to bottom left going from dark brown to light brown. As mentioned before, you can align these up using the layer align tools.

Note that its better to draw a new circle, because if you contract circle selections too much they start getting a bit weird. This is because of the way that Photoshop uses pixels rather than a path of the circle. 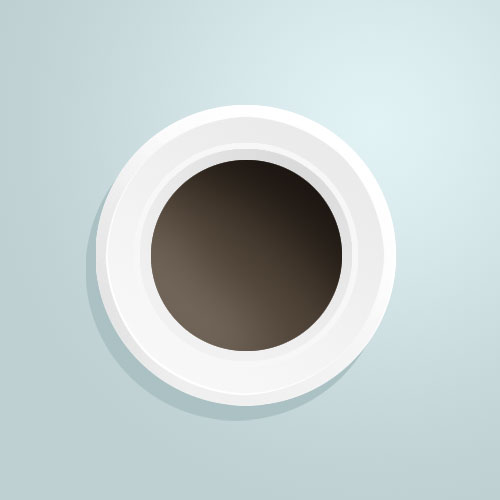 Next use the Rounded Rectangle Tool (U) to draw in a shape as shown in a new layer. Note that I left paths on so that I could screenshot it properly, but actually you just need the shape.

Next choose the Burn Tool (O) and with a soft medium brush, just brush the edge closest to the coffee cup to give it some shadow as shown. You can also give it a bit (less) shadow on the other side of the shape too, but make sure that it's light in the middle. 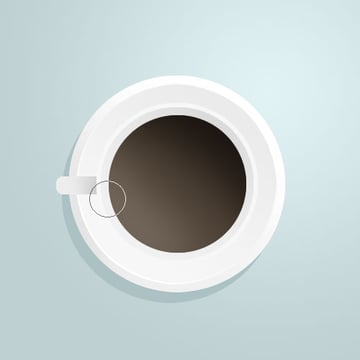 Now go to Edit > Transform > Perspective and transform the shape as shown. This is going to be the handle to our cup. 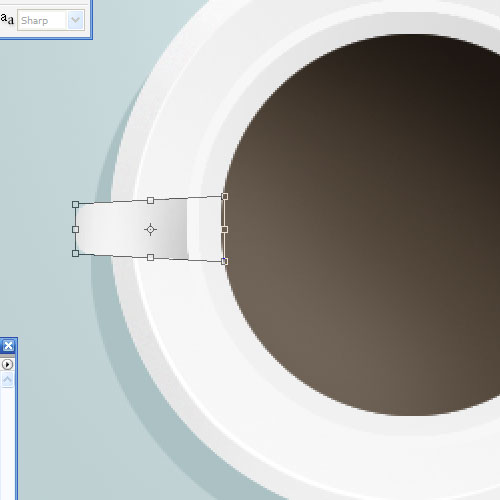 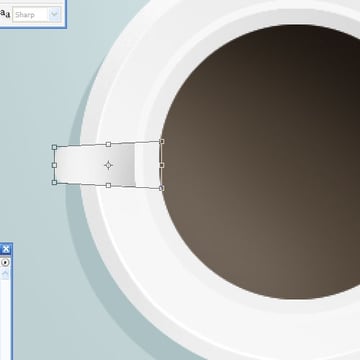 Now Ctrl-click the handle layer to select its pixels, go to Select > Modify > Expand and use a value of 1px. Then in a layer below the handle layer fill your selection with white. Then press Ctrl+D to deselect and then press the right arrow twice to move it to the right. This is just to give our handle a bit of a thin white highlight.

Now Ctrl-click the handle layer and in a new layer fill the selection with dark grey. Then press CTRL+T to transform the new layer as shown so that its at an angle. Then place that layer below the handle layer. 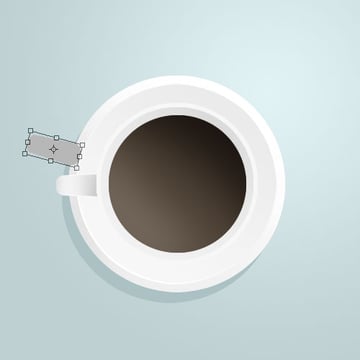 Now press Ctrl and Shift together and click all the cup layers to select the pixels for all of them together. Fill that layer with a light grey as shown (note that I've moved it to the left and down so that its visible). Make sure this layer is at the bottom of all the cup layers, but before the saucer layers. It is the cup shadow.

Set your latest layer to Multiply and 30%, then hit Ctrl+T to transform the layer and rotate it a little as shown. 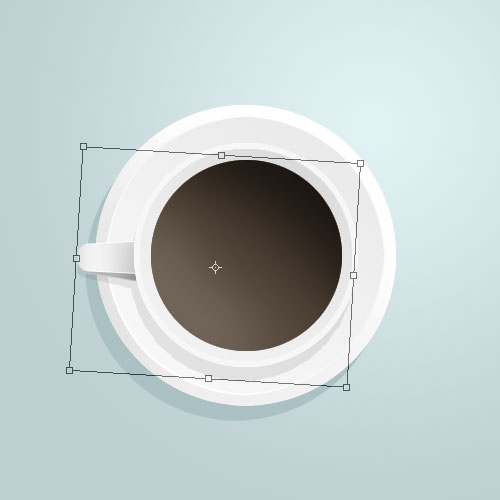 Finally we'll add a little steam. Create a new layer at the very top and with a big soft brush, paint a little white in some random shapes as shown.

Now go to Filter > Distort > Wave to distort the white into a smoky shape. I don't really understand this filter and usually just play around with the settings until I get the effect I'm looking for. This usually involves a bit of trial and error and hitting the Randomize button lots! Sorry I don't have a better explanation of that step. Luckily the wave tool is so useful that its probably good for you to play around with it a little and learn how it works. 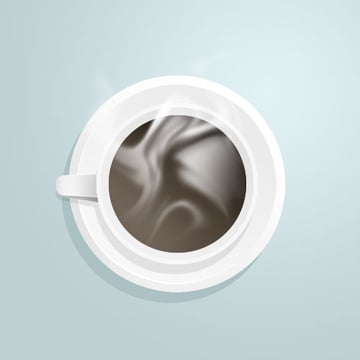 Finally set our new smoke layer to Overlay to make it a little more subtle and you're done!

As I mentioned at the beginning, the result of this tutorial isn't particularly useful, but it's an interesting experiment in light and shadow, which are useful things to learn for your general compositions. 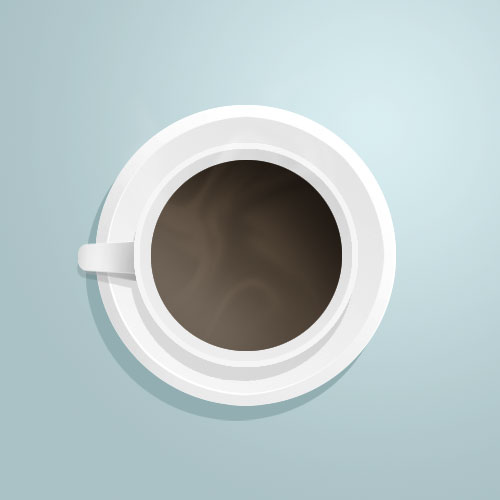