The latest version of Photoshop CS4 offers a variety of new features that save time and work. In this tutorial, we'll take a look at all the new GPU based features and how to use them. On the one hand they save you a lot of time, on the other hand they snatch your RAM away and stress your graphic card, but one things for sure, they all look cool! Let's jump into Photoshop and take a look at what it offers!

Some of the brand new features benefit from the graphics display card's GPU, instead of the computer's main processor which speeds up the screen redraw in Photoshop. Obviously there are some requirements to make sure Photoshop has full access to the GPU. The main technologies which are required are: OpenGL 2.0 and Shader Model 3.0. You should check out your graphic card's manufacturer website, to make sure your graphic card supports these technologies, before buying Photoshop CS4.

Photoshop should automatically detect your graphic card and enable the OpenGL features, but you can manually enable or even disable them by opening the Performance section of Photoshop's Preferences. I recommend taking a look at our article featuring professional tips for improving Photoshop's performance for further information. Now that the graphic card is up and running perfectly, we can proceed with the interesting part of this tutorial.

Smooth Display at All Zoom Levels

In CS4, Photoshop not only displays smooth images at 100%, 50% or 25%, but also at all other zoom levels. Zooming in or out using the Zoom Tool will result in much smoother zooming than before. Take a look at the zoom level of 82,61%! 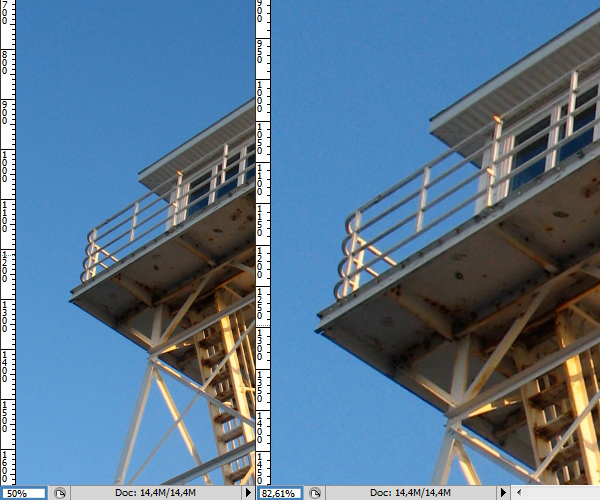 Select the Zoom Tool and click and hold on the image. That way, you'll be able to continuously zoom in or out smoothly until you release the click. Press Alt to reverse the direction of the zoom.

Animated transitions for One Step Zoom

When you zoom in using Command + Plus key or zoom out using Command + Minus key, the image animates slightly between the zoom levels which gives us a nice smooth effect. It's a nice subtle distinction to the previews halting zoom. Since both of these features are difficult to demonstrate using still images, select the Zoom Tool and try it yourself.

Photoshop CS4 now displays a pixel grid when zooming in to a zoom level of 600% or greater. The nice thing about this is the possibility to work pixel for pixel, which makes it much easier to create icons, small extras or any changes which require precision.

To enter the Birds-eye View, you need to zoom in on an image, then press and hold down the H key and then click and hold your mouse somewhere in the image. A rectangle will be displayed which indicates the current zoom level and location. Reposition the rectangle and release the mouse and H key. Photoshop will then zoom back to the previous zoom level and reposition the view. The ducks are very close to each other, but this example should visualize how it works. 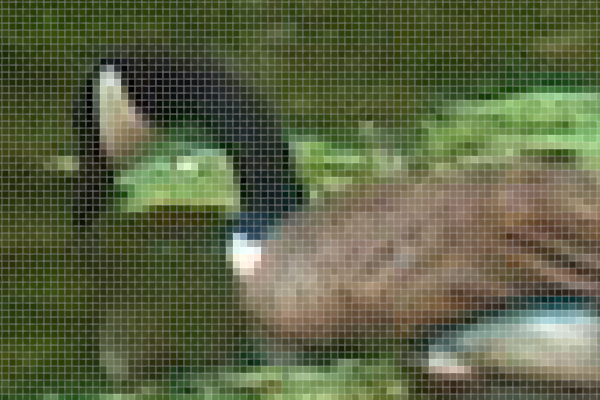 This feature is also known as the flick panning which is cool, but not necessarily useful to improve one's workflow. This is something you could leave enabled to have fun, but you should disable it when performance is limited.

To use it, select the Hand Tool and flick the image to the sides. The image should slide and slowly come to a stop. You don't have to wait until it comes to a stop, simply click whenever you want it to stop sliding. Note, this only works if the image doesn't fit the screen or while zoomed in. 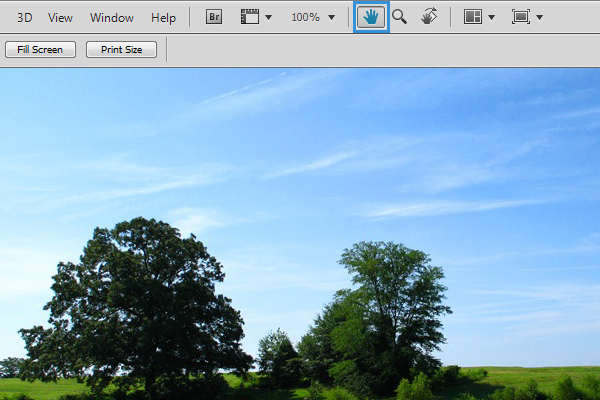 Move Color Matching to the GPU

Color conversion in Photoshop CS4 has become faster because the processing is now done by the GPU rather than by the CPU. It's not noticeable at first, but it'll pay off at a later time when working with multiple, huge images. 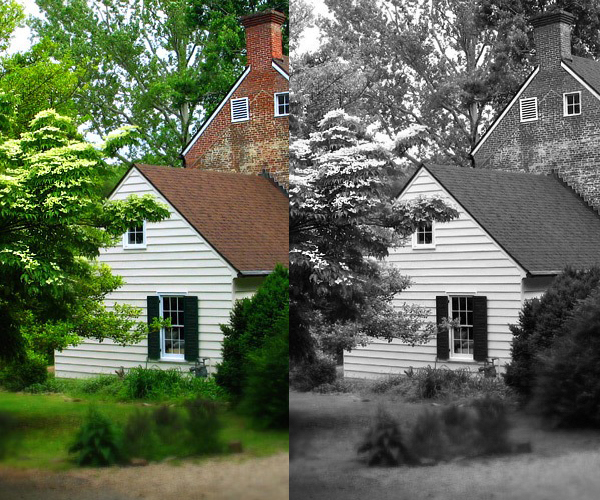 One of the best features is the ability to resize your brush and change the edge hardness of your brush by dragging your cursor. In addition, you'll get a nice feedback in the form of a red overlay color which displays the new brush while you change the size or hardness. 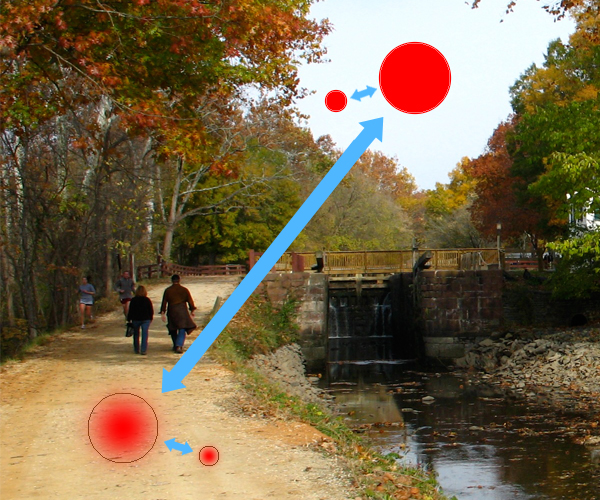 In order to rotate the image, click on the Rotate Canvas Tool, which you can find under the Hand Tool in the Tool's panel, or at the top Menu bar next to the Hand Tool and Zoom Tool.

Click and drag on the image to quickly rotate the canvas. Notice how the rulers change immediately. Note: only the canvas moves, not the image itself.

You can additionally use the spin control in the Tools Option bar or enter a degree manually. I recommend using this feature to align the image to the movement of your hand for better flow. Don't forget to reset the view. 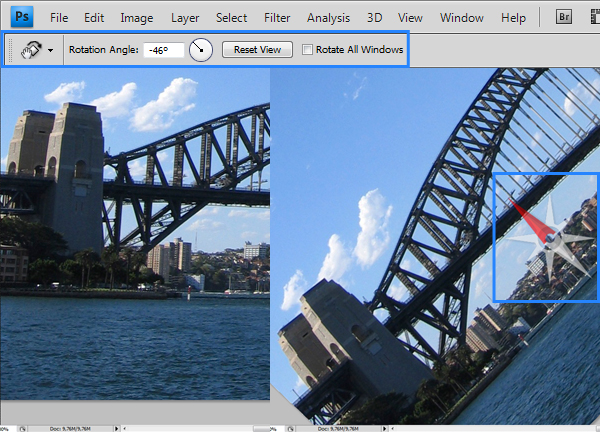 This feature helps you work much better with the Clone Stamp Tool, since it previews your selected source area. By looking at the preview inside the brush, you'll know as soon as you reach an inappropriate areas where you should not clone anymore.

This feature makes it much easier to switch between the tools. For example, after making a selection using the Lasso Tool, hit and hold down the B key to select the Brush tool. Color the selection and release the B key to switch back to your Lasso Tool. You can now make a new selection, switch to the Brush, paint it out and come back again.

Another good example is the Zoom Tool, hit and hold down the Z key to select the Zoom Tool, zoom in or zoom out by additionally hitting the Alt key and then release the Z key to switch back to the previous tool. The cool thing is, this works with all tools and saves you a lot of time.

I don't know if you've noticed, but Photoshop now creates a nice shadow around the canvas to highlight the image. A great tip you should know is the possibility to change the background color from the default gray color to a custom color. This isn't a new feature, but it assists the workflow by giving you the chance to set a different ambience.

There are some additional features which you can't see without a second look. We'll take a look at three of them shortly. You can access the Advanced settings by going to Photoshop/Edit > Preferences > Performance > Advanced Settings.

Sets vertical sync to the refresh rate of the monitor. This should reduce tearing of the image while dragging your images. If it doesn't bother you, feel free to disable this feature which will speed up the interaction. Note, the images will start tearing though.

I'm not that much into 3D imagery in Photoshop, but this turns off the 3D Direct to Screen accelerated interaction. I will talk about it shortly.

Photoshop is not the only application which gets the chance to use the power of the GPU. Bridge, one of the most neglected tools with enormous power and usability, is one of the other applications which takes advantage of the GPU.

As the name says, Bridge is a bridge over between the single applications, which is mainly used for searching, arranging, browsing and pre-processing different files like images or other footage. I would like to touch on some of the new Preview features below. 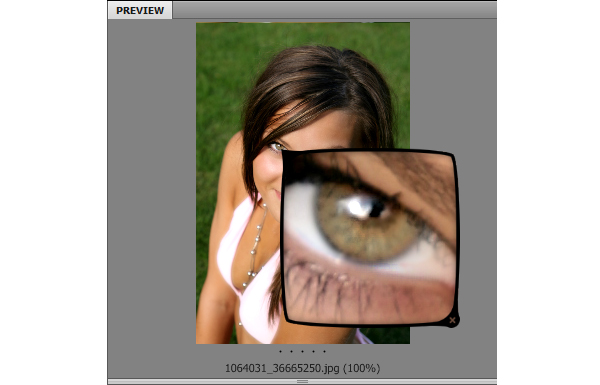 Selecting one or multiple images and clicking the Spacebar opens up a Full Screen Preview of the images. By using the left and right arrow keys, you will be able to navigate to each image's full screen preview. Additional features like zooming in or out or moving around the current image at any time help you pre-select your images before moving into Photoshop.

The nice Carousel-style preview is accessible by selecting multiple images and hitting Command + B. Again, use the left and right arrow keys to move the focus to the next or previous image.

The best part is the ability to remove an image with a simple tap on the down arrow key. Note, the image wont be deleted, it's just removed from the slideshow. This type of preview allows you to zoom in or out too. By hitting Command + R you'll be able to instantly access the Camera RAW, whether it's a TIFF, JPEG or any other format. 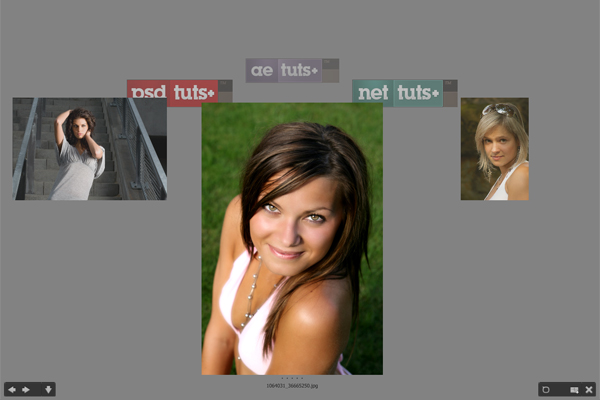 Last but not least, I would like to mention the new 3D GPU features which come with the Photoshop CS4 Extended version. Since I'm not that much into working with 3D objects in Photoshop, I can't really tell you much about them at this moment, but I listed them below with some additional links which should help you get started and show you what the extended version is capable of in terms of 3D imagery.

Thanks for reading this tutorial. Although these are very nice features, keep in mind that they will take up alot of RAM and Video RAM. Make sure you check out our related tutorials here on the site to keep an eye on your performance while having fun with these cool features!

Kajik
Hey, my name is Kajik and I love to work with all the Adobe products to design and create graphics, motion graphics and websites. Photoshop is one of my favorite tools to bring my ideas to life.
Weekly email summary
Subscribe below and we’ll send you a weekly email summary of all new Design & Illustration tutorials. Never miss out on learning about the next big thing.
Advertisement
Translations