Take an image of a fireworks display and turn it into an intense sensation of speed. Manipulate natural lighting to fill a motion filled scene. Use masks to blend the effect over a car image to make the car appear to be in motion. This tutorial shows you exactly what to do. Let's get moving.

Before we get started, let's take a look at the image we'll be creating. Click the screenshot below to view the full-size image. As always, the full Photoshop file is available via our Psdtuts+ Plus membership. 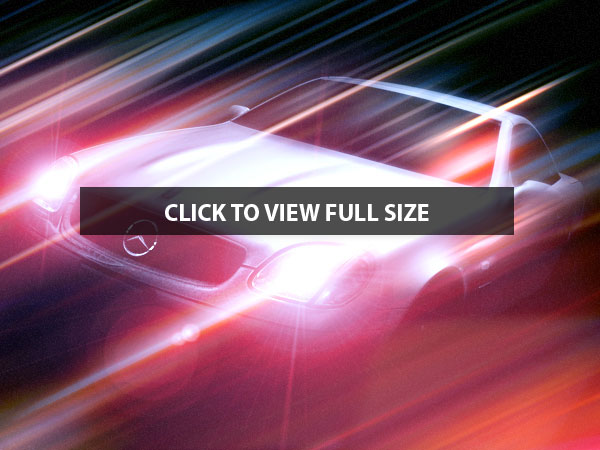 First, you'll need two stock images for this tutorial, one of the car, and the other is of fireworks.

Start off by duplicating your background layer. Now desaturate this image to get rid of the annoying hue by pressing Ctrl+Shift+U. Next, we'll add our own color modifications, which are more subtle, and cover the entire vehicle. Add a new adjustment color balance layer and fill in the values as shown in the screenshot. Next we place everything in a layer set called "edit". The layer set is so that you can turn off all the visibility on all the work you did. This will allow you to see the difference between the original image and how far you are in the design.

Using the Dodge and Burn Tools with soft round brushes around 150–200px in size, with the Dodge Tool set to Highlights, the Exposure at 45-50%, the Burn Tool set to Highlights, and with the Exposure set to about 85-90%, start dodging and burning certain parts of the image. For instance, you may want to dodge the front wheel arch, the lights, Mercedes logo, grill, and the mirror. You may want to burn the rear end, the bottom, the back door a tad, and the windows until they turn completely black.

You should decide what you find adequate. If you are using a mouse like me, simply tap, instead of constantly pressing, this way you have a lot more control. We are doing this to add contrast. The After image below shows the windows blackened, and other areas as well. 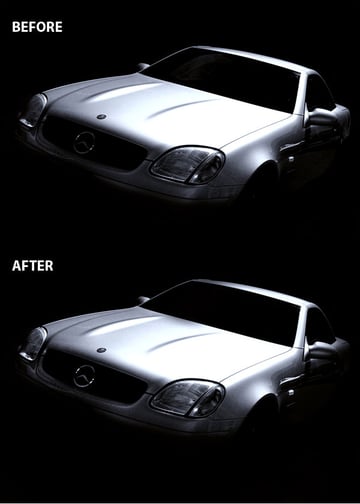 Now open up the fireworks image. Go to image > rotate canvas > 90°CW. Next go to filter > blur > motion blur. Set the angle to 0° and the distance to 750px. Hit OK. Then cut and paste this picture onto our car. We won't be using this entire image, the areas of interest have been marked in the image below. The area with the big red X over it is pretty much useless.

Paste this "light" layer above the background copy layer and below the color adjustment layer. Set its blending mode to screen. This gets rid of the black background without hurting the other light values. Now rotate and position the spot marked with the green arrow in the previous screenshot above the right headlight, as shown below in the screenshot. You can stretch the image if you want; it's blurred already so blurring it more won't hurt.

Duplicate the light layer and move the spot that was marked green in the previous screenshot to the left headlight. Hit Ctrl+T and size it down just a bit. Now add a layer mask to this layer. Then with a soft, black brush get rid of most of the surrounding light. Below is the image of the mask. 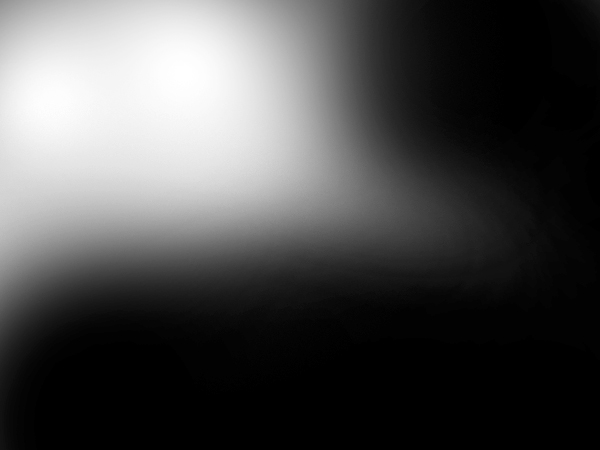 Go back to your "light" layer. Select the Clone Stamp Tool (S). Set it to Linear Dodge (add) in the settings at the top of the window. Then get a decent sized brush, about 500–600px. With the settings below, start cloning different parts of the existing light onto the windows and the roof. Cloning is an easy task, you Alt-click to set a source. This is where the material will be cloned from. Then simply click on another spot on the canvas to clone a piece there. One word of caution, make sure that Sample is set to current layer!! 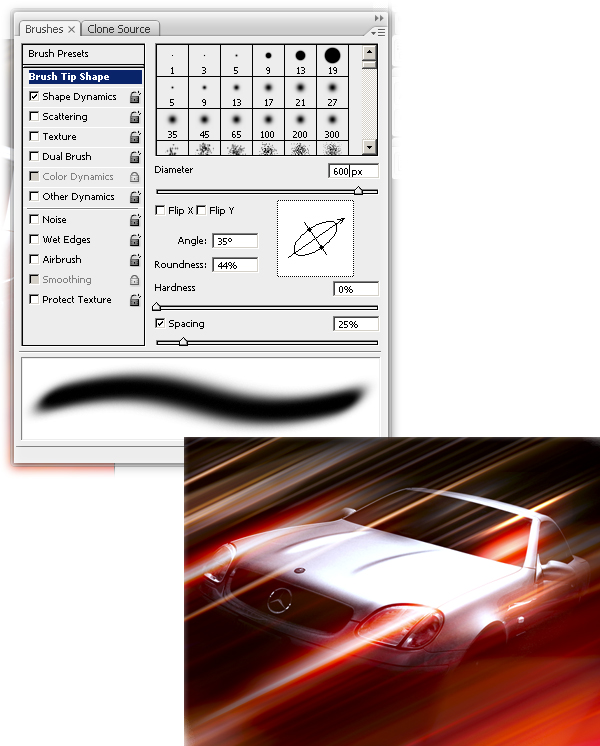 Add a new layer below the "light" layer. Call it "flare". Fill this layer with black and set it to screen. Next go to Filter > Render > Lens Flare. The 105mm prime at 110% brightness looks good, but perhaps you like something else. Put the flare a bit off-center, hit OK. Then position the flare over the left headlight. You might notice a white box appear when you move around the flare—that's because the flare stretches beyond our canvas. Use a layer mask to get rid of this box.

Now make sure the "flare" layer is selected (and not the mask), hit Ctrl+U, or go to Image > Adjustments > Hue/Saturation. Then in the dialog box, tick Colorize. Then enter 60 for Saturation. Hit OK, duplicate this layer, make it a bit smaller, and place it over the other headlight.

Tip: if you don't want to repeat the flare process again, but you do want a brighter flare, then you can duplicate the layer without moving it.

I don't like monotone images. This image is far too red. Let's add a splash of color. Create a new Color Balance adjustment layer just above our first one. Then fill in the following values in the images below. This will give you more tones. 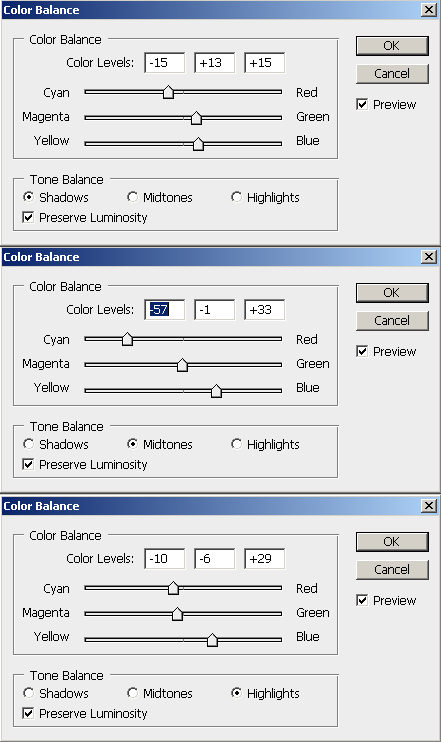 Duplicate the "background copy" layer and go to Filter > Blur > Motion Blur. Then set the angle to about 35° and the distance to 25px. This gives us a very blurred image. With a layer mask, mask out areas of focus, such as the headlights, the grill with the Mercedes logo, and the windows. Also, mask out the black background, this will focus the blur more. If the background were not black, but rather there was scenery there, then it would make far more sense to leave it blurred. Since it's black, by masking it we will obtain a soft edge around the blur (since we are masking with a soft brush). Name this layer "motion blur". 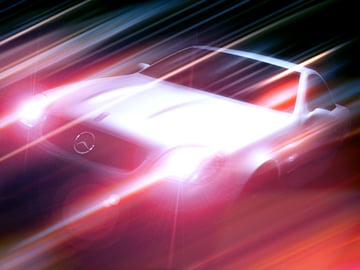 This next step is to get a bit of detail back. Duplicate the "background copy" layer. Move it above the "motion blur" layer. Now hit Ctrl+L ,or go to Image > Adjustments > Levels. This will bring up the Levels dialog. Then take the white slider, located at the right, and move it towards the middle. Next add a Layer Mask, and mask out most of this layer, except for the front of the car. I called this layer "grill detail". 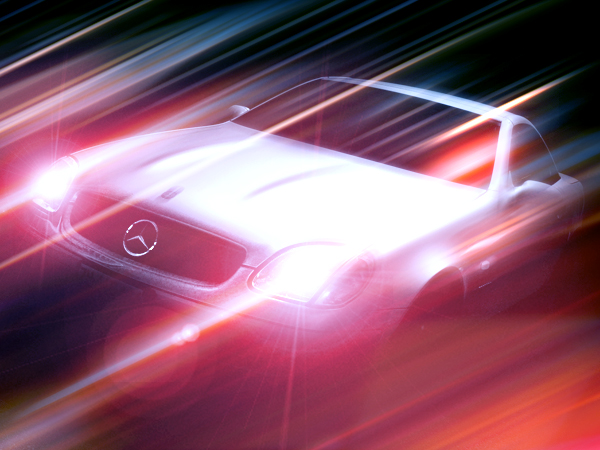 Let's light up the window a bit. The next step is to create a layer above all other layers and call this "window light". Take a low Opacity (15-20%), white, fuzzy brush, which is just big enough to cover a decent part of the window, and slightly tap a few times on the glass. This should add brightness to the light there. Last but not least, create another layer on top of all the other layers. Fill it with black. Then go to Filter > Noise > Add Noise. Set the amount to 10%, Uniform distribution, and tick Monochromatic. Set the layer to screen, and drop the Opacity to around 40%. We're done. 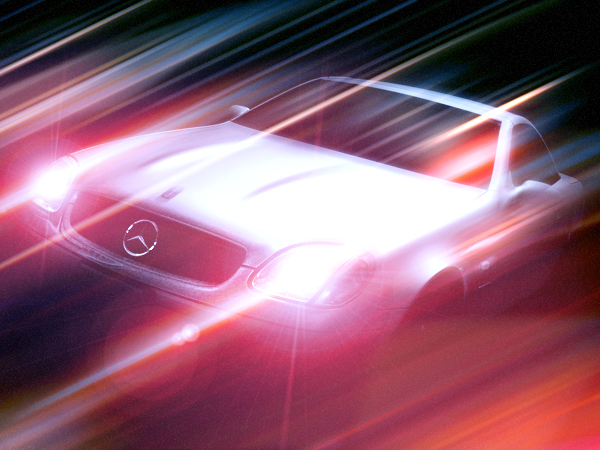 Starting with the natural lighting of a fireworks display image, we created a motion effect. You can apply this to many different objects—think sunglasses, and other reflective surfaces. It works great as a tool to enrich a scene, like a club scene where you might want some extra lights, or a whole design element for a poster. It's a strong effect you can add to your Photoshop skill set.

Arik
Hey there! Well, I'm Arik and I have been designing for about 4 years now. I've worked my way up by reading a lot of tutorials and spending a lot of time using Photoshop. I hope that you will enjoy my contributions to psdtuts.com!
Download Attachment