Splattered Vector and Photography Mash Up

Mixing Vector work with Photography is a great way to produce a fun and colorful art style. This approach is used in a variety of projects from club flyers and CD Artwork through to high-end advertising imagery. Expanding on the comprehensive guide to the Pen Tool by Ian Yates, we look at creative ways of implanting the tool. This tutorial should convince those of you lacking the confidence to draw within Photoshop to do so with style.

Before we get started, let's take a look at the image we'll be creating. You can view the final image preview below or view a larger version here.

Usually, I would gloss over the cutting out of an image but as we're expanding on the Pen Tool tutorial here, I'll focus on a couple of useful tips.

First go to sxc.hu and download this image of a Gun (thanks to neoisam for the awesome pic - there's a lot of variable quality images available on this site, and this at the top end). Then zoom into about 300% and select the Pen Tool. Make sure it's set to Paths and Add to path area (+), start drawing around the arm and the gun.

As mentioned in the Pen Tool tutorial it is good practice to begin drawing a curve at the start of the curve and not in the middle. Pull the anchor point so it runs along the angle of the straight edge. 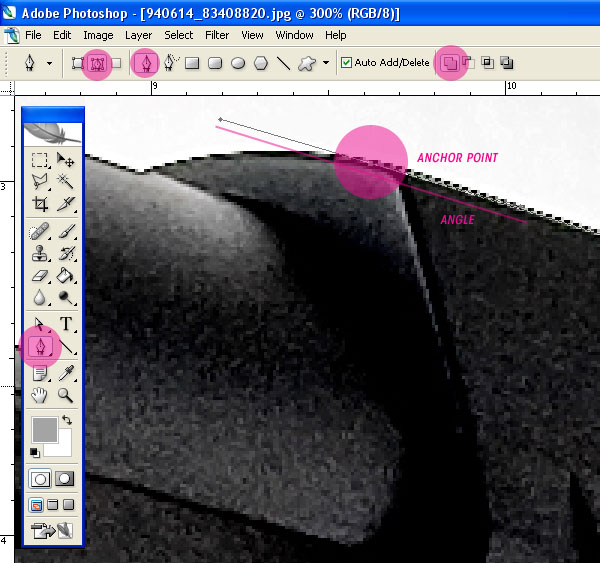 Add the next anchor point at the end of the curve where it meets the straight edge. As we can see the curve is too great so select the Direct Selection Tool (the white arrow not the black one) and pull the handle back. After a while you'll be able to judge how to pull the anchor points to satisfy each curve. 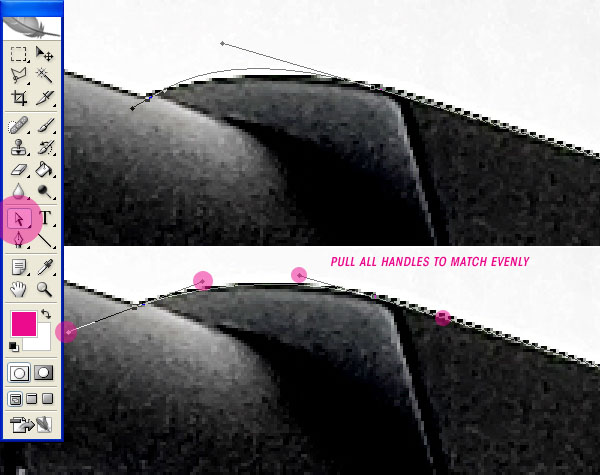 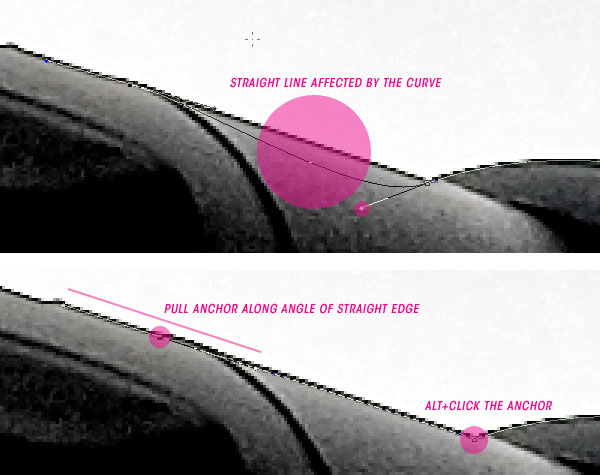 Finish drawing around the image. Below is an example of how to manipulate the anchor points around multiple curves. The idea is to get as few points as possible to create a natural line, but if you need to put a point mid-curve then don't feel like you can't.

Set up a new document. For the basis of this tutorial I've created an A5 landscape at 300dpi. Copy and paste the gun into the document. Select the Pen Tool and set it to Shape Layers instead of Paths. Select a color, at this stage I've gone for 100% Magenta, but this can be edited at any stage. Start drawing a dribble coming out of the end of the barrel. 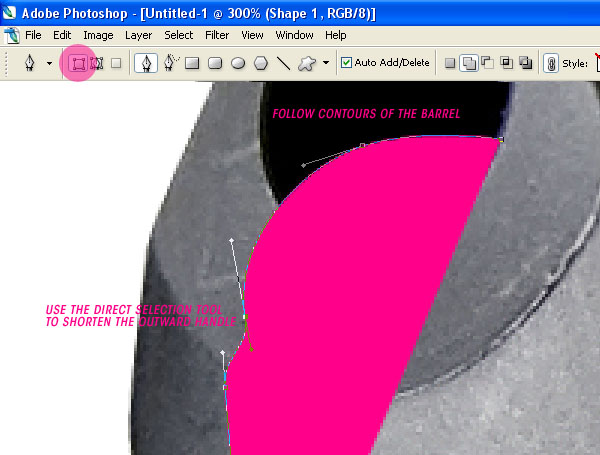 You'll need to employ a certain amount of imagination. Picture the vector as a thick, colored goo and then place it in the real world as if affected by the laws of physics. As such, continue to draw it dribbling from the barrel.

Use the Direct Selection Tool to clean up any points that you're not happy with.

Now it's time to apply some depth to the vector goo. Select the "dribble" layer and go to Layer > Layer Style > Blending Options and set up as in the three screen shots. Adjust the colors to suit your own needs. 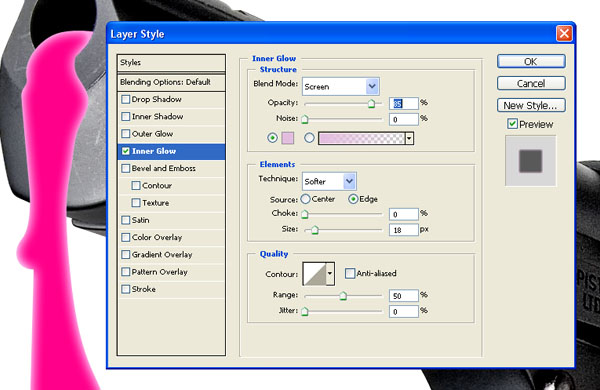 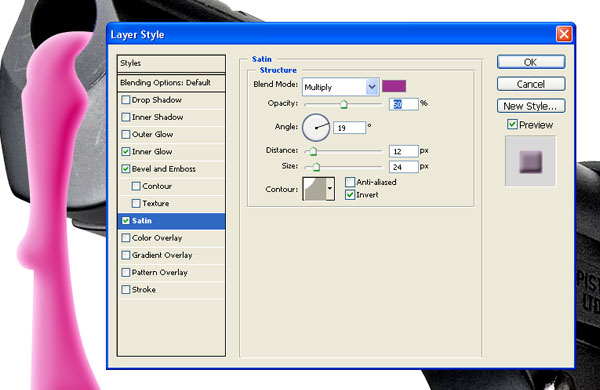 The Layer Style settings aren't quite right for the smaller waves of goo so select the appropriate layer, expand the Layer style icon (looks like an ‘f' in a black circle) and adjust the settings as in the screen shots. 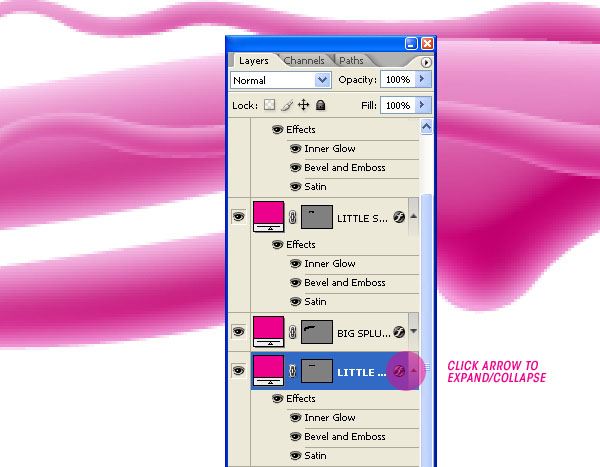 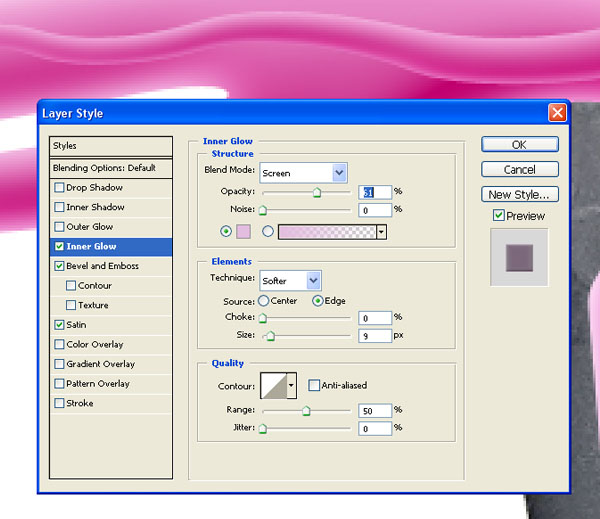 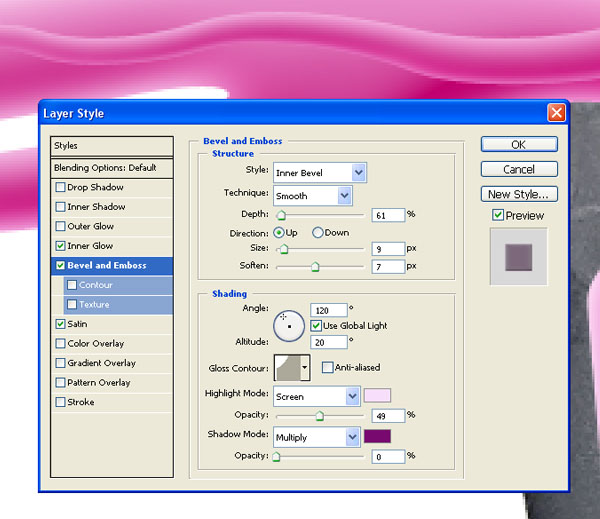 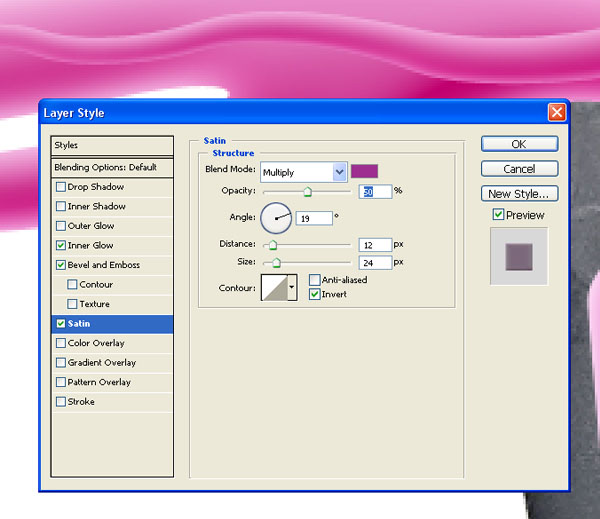 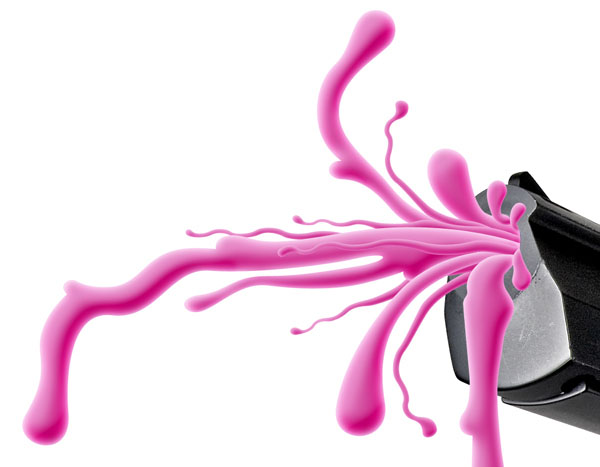 Draw a few small globules of goo and paste the Layer Styles to match the rest. Using the Move Tool, hold the Alt key and drag copies of the globules. Press Command + T to resize and rotate. Repeat this process until you have a good covering of goo. Experiment with depth by moving the duplicate layers up and down the layers palette so that they fall in front of or behind other "goo" layers.

Add drop shadows on the gun barrel, using: the eyedropper for color, a new layer, soft brush, a selection from gun, a layer mask, draw, and multiply.

Open the grenade image from sxc.hu, cut-out, import it into the document, then Command + T to resize and rotate it. 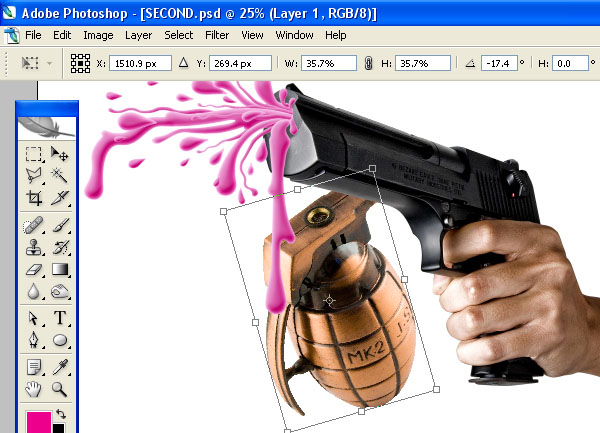 Draw a path around a section of the grenade, don't worry about the outer edges, as they're already cut. Turn path to selection and cut and paste onto a new layer (deleting the sections from the original grenade as you go. Continue cutting out sections of the grenade until it's broken into several pieces, you can go as detailed as you like. Once you have all the pieces separated, rotate them as if blown apart.

Use the Pen Tool, to draw smoke using the same techniques. I've changed the color to depict the different areas of smoke, but make them the same color as we'll be using Layer Styles to create depth. 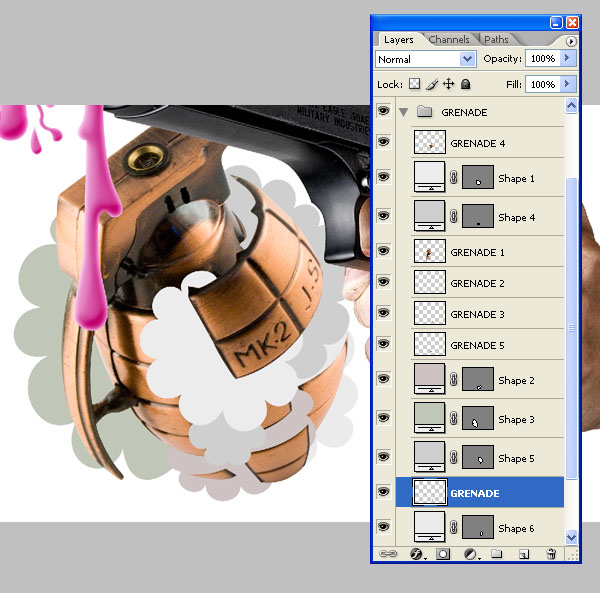 The smoke looks flat so set up some Layer Styles (as you did for the goo) to add depth and lighting. See the screenshots for the settings I used. Copy and paste the Layer Styles to all the "Smoke" layers once set up.

Drawing cartoon-like outlines around the smoke will add impact and keep it looking fun. You can either do it manually or select the Smoke Shape layer so the path is visible and copy the path. Go to the Paths Palette, create a new layer and paste the path onto it. Delete the parts you don't want by selecting the individual anchors. Draw in some extra detail and extend any existing lines you want.

Create a new layer, use this layer to apply outlines you've just drawn. Select the Paintbrush tool and set the brush up at 7 pixels with 100% hardness. Select the Path from the Paths palette and then select Stroke Path from the contextual menu (small right facing arrow in a circle at the top right of the Paths palette). I then resized all the "grenade" layers (including smoke etc) as it had too much presence. 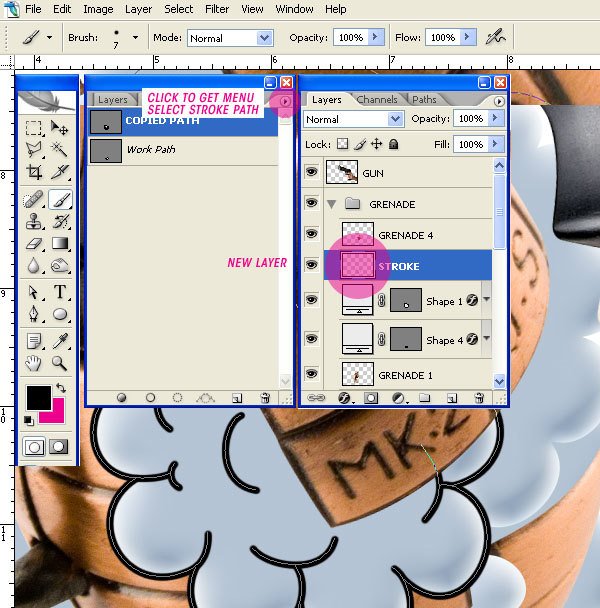 Now the fiddly bit, especially if your layers palette is as messy as mine. Create a new layer and set the Layer Blending Mode to Multiply. Command-click on all the "grenade" layer thumbnails to make selections from them and add a layer mask (light circle in a dark rectangle at the base of the Layers palette.

Now, (working on the new layer and not the layer mask) Command-click the top grenade piece and invert (Command + Shift + I) the selection. Select the Paintbrush tool and take a soft-edged brush and draw on the shadow, I used a dark gray, rather than a Black. Press Command + H to hide the selection if it helps. Continue in this fashion. Switch between a 45 pixel brush and a 20 pixel brush.

The Grenade needs more goo coming out of it for impact so draw in some as you did for the gun. Move the "goo" layers in between the "smoke" and "grenade" layers for depth. Adjust the Shadows layer mask accordingly (I Command-clicked all the "grenade goo" layer thumbnails and masked it off directly on the "shadow" layer). You may need to manually edit your selection (using the Polygonal Lasso Tool) in places.

Copy all of the "Grenade" layers and flatten them to one layer. Place the new Grenade at the top of the Layer hierarchy and resize to fit the perspective. Go to Filter > Blur > Lens Blur and set up as in the screenshot. Then use the Blur Tool to blur the edges of big Grenade.

Merge all of the Pink "goo" layers coming out of the gun and apply a 0.6 Pixel Gaussian Blur. This will further fuse the elements together. Do the same for the un-blurry Grenade goo. Once you've done that, flatten the image. 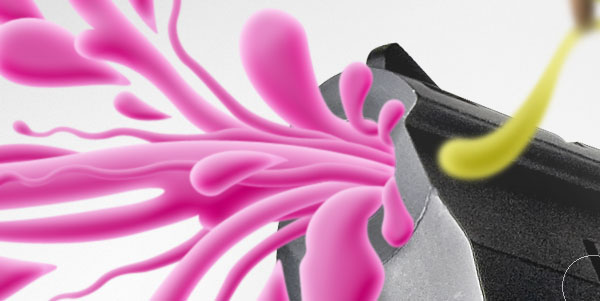 I think it needs a little more punch so add a Curves adjustment layer to boost the contrast. This will further fuse the elements together and increase saturation as well. Go to Layer > New Adjustment Layer > Curves and set up as shown below.

Finally, duplicate the "Background" layer and go to Filter > Artistic > Film Grain. Set this up as shown and OK it. Then reduce the layer Opacity to 55%. From this point you can add further Adjustment Layers like Hue/Saturation and fine tune all the Adjustments until you're happy. 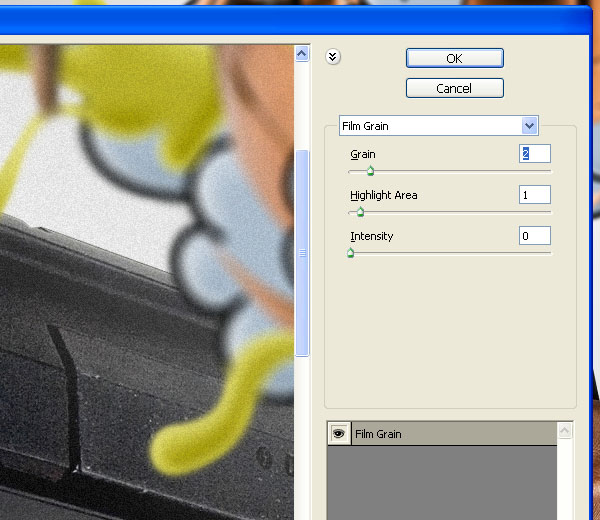 I hope that was as much fun for you as it was for me! You can view the final image preview below or view a larger version here.