VectorScribe is an Illustrator plug-in that will change the way you work in your favorite vector drawing program. After you've used it for a while, the old ways of file construction will feel cumbersome and tedious. VectorScribe is powerful and intuitive, but like everything, it has a learning curve and takes some getting used to. Don't let that deter you &mdash once you know your way around this toolset, you'll work faster, smarter and more cleanly. Let's get started!

This is a sponsored review or giveaway of a product/service that's particularly relevant to our readers.

VectorScribe comes in two versions: Studio and Designer. In this tutorial, I'll mostly deal with the PathScribe tool, which is part of Designer, and the Dynamic Curves tool, which is in VectorScribe Studio. You can download a free seven-day trial here.

As a reference, I'm using an old car ad, which I have placed on a Template layer. You can of course use a sketch, a photo or just draw from your imagination.

Using the Rectangle tool (M) draw a rectangle as in the image below. This will make up the hood and front of the car. 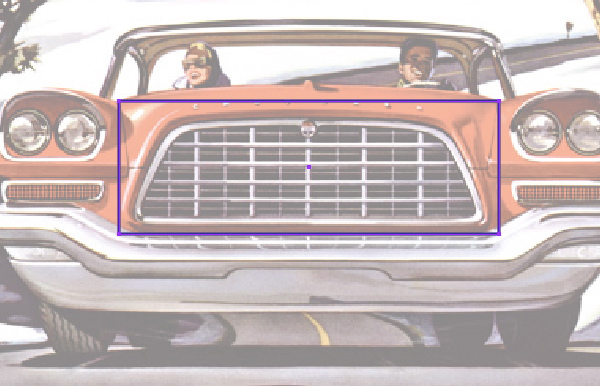 Select the PathScribe tool. Start dragging the top segment of the rectangle. You'll notice that the path begins to curve. Drag from the side of the segment (not the center), then hold down the Shift key to make the curve symmetrical. Drag it so it matches the curve of the car's top. 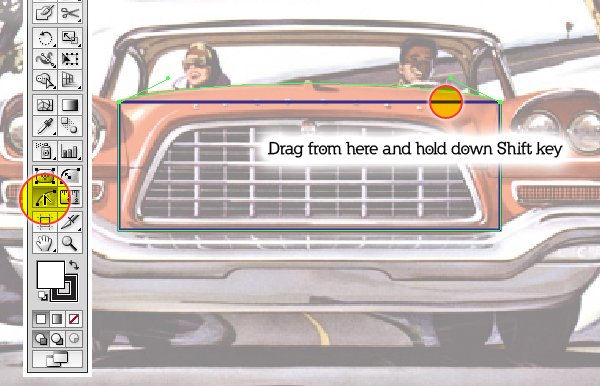 Already you can understand how much more efficient the PathScribe tool is. To create this shape with Illustrator alone, you'd have to draw the rectangle, then draw an ellipse, then align them, then use the Pathfinder to merge them. You might even need to clean up extra points. With VectorScribe, a 4-step process is reduced to just two steps, and is much more intuitive and accurate.

Note: Dragging a straight path from its center while holding the Shift key results in a different behavior of the corner handles, as you can see in the following comparison:

Draw another rectangle, covering the area of the windshield. Using the Free Transform Tool (E), drag a top corner of the rectangle while holding down Command + Shift + Option. This will change the perspective so the result is a trapezoid shape, as in the image below.

As before, use the PathScribe tool to create a rounded top.

Go to Window > VectorScribe > Dynamic Corners Panel. Then click the panel to select the tool.

Hover over the top left corner of the trapezoid. Begin dragging with the Dynamic Corner tool, and you'll get immediate visual feedback on the corner. Align it with the source image. Now, all you need to do on the right side is click the corner and a curve will be created with the very same radius as the one you just dragged. 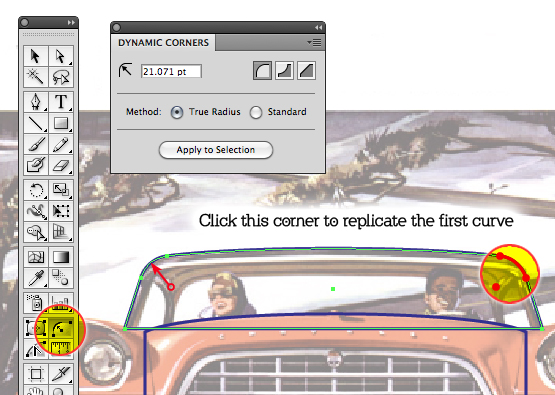 Again, with Illustrator alone, these curves would have to be drawn manually, or a combination of ellipses would have to be used. VectorScribe's Dynamic Corners uses a true radius, which allows for better accuracy than can be achieved by hand. I think they look better as well.

Using the Pen Tool to draw a 4-sided polygon for the window. Using the Dynamic Curves tool, drag the corners to create curves.

For the grille, make a trapezoid shape as before. Drag the top path with the PathScribe tool to make it curved. Do the same with the left and right sides. Use the Dynamic Corners tool to create curves, as in Step 5. 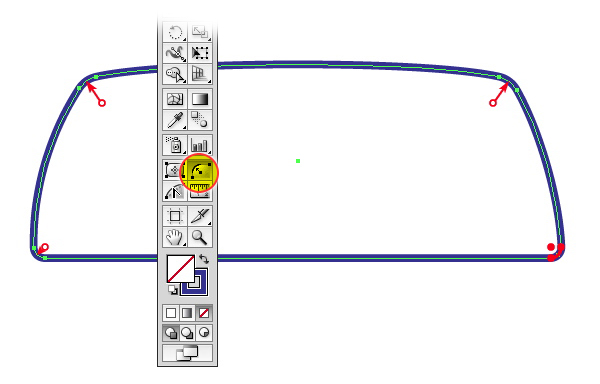 Draw a rectangle around the outside of the headlight housing, as below. Take the Dynamic Corners tool and draw the curves for both top corners and the lower left. 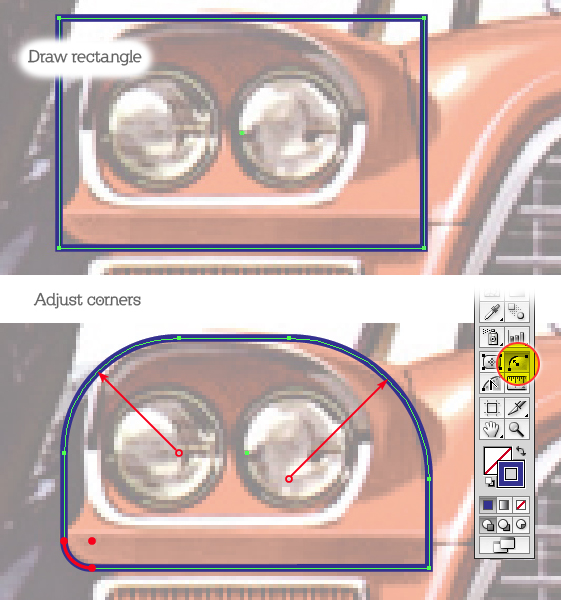 Switch to the PathScribe tool and drag a curve inward, between the points on the left edge, as shown. 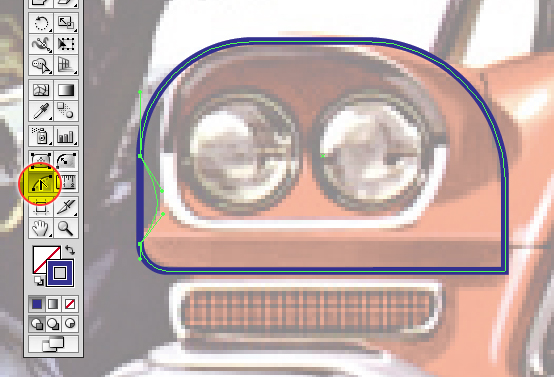 Still using the PathScribe tool, select the point at the top of the curve you just made. If the PathScribe panel is not visible, go to Window > VectorScribe > PathScibe Panel to show it. Click the Smooth point icon on the panel, as in the image below. Once again, you can see how VectorScribe makes such an adjustment quicker and more accurate.

For the inside of the light housing, draw a rectangle as before, and adjust the corners with the Dynamic Corners tool.

Here's what we have so far. You'll notice the red annotations on the curves. These indicate the "dynamic" status of the curves. You can think of "dynamic" in the same way that Illustrator uses the word "live."

In this case, all of the dynamic corners' radii can be modified, either by dragging with the tool, or by entering a value in the panel. Even if you move the corner's position, the curve radius is maintained. If you hold down the Option/Alt key while positioning the curve, you'll see an indication of the curve's original, non-curved path, and you can always go back to that angle by choosing Remove Selected Corners from the panel's flyout menu. Alternately, you can simply drag with the Dynamic Corners tool beyond the original point to revert back to a straight corner. 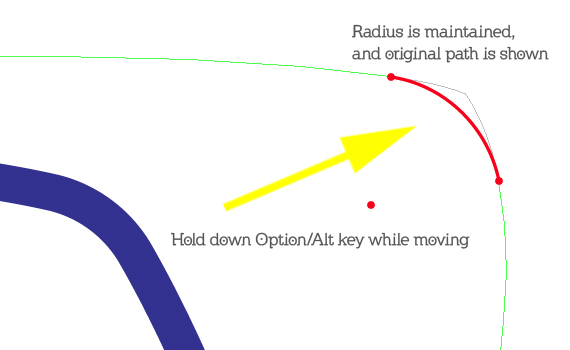 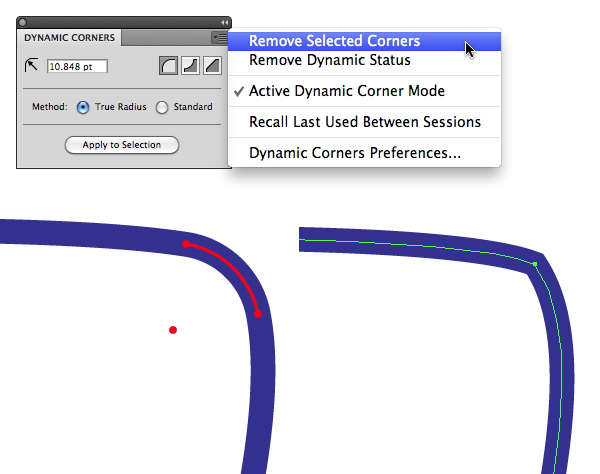 For the bumper, draw straight segments with the Pen tool, then add curves with the Dynamic Curves tool. We'll just draw half, then reflect and copy for a symmetrical shape.

Make the stroke much thicker, and add a rounded cap.

Go to Object > Path > Outline stroke. Switch the fill and stroke if you wish, by pressing Shift + X.

Select the end point and click the Retract Handles icon on the PathScribe panel, as in the image below.

This is the same as clicking on the point with the Convert Anchor tool. In this instance, where we have a single point to convert, there is no advantage to using the PathScribe function. But imagine having a curved flower shape with many petals that you want to convert. Being able to do it with one click would save lots of time!

Use the Reflect tool to flip the half-bumper horizontally while making a copy of it. Merge the two shapes to complete the bumper 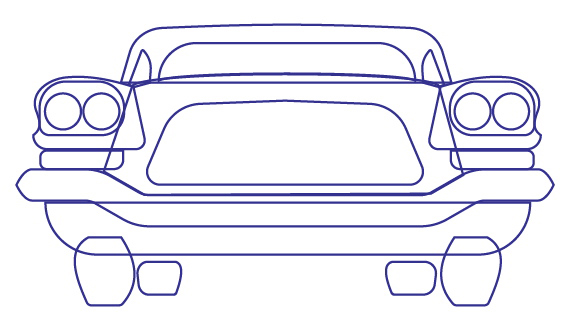 I've just scratched the surface of what this suite of tools can do. VectorScribe is rich with features, in an intuitive, familiar interface. More than a few times I've used a tool or clicked a button and thought, "Wow, that's how Illustrator should have worked all along."

I hope this tutorial encourages you to try it and have a few "A-ha!" moments of your own. The image below shows the final vector car, after adding color and a few more details. Have fun creating your own.