This entire task will be performed via JavaScript script for Illustrator. The tutorial assumes that you're familiar with the basics of scripting. For those who've directly landed on this tutorial, we have a little know-how covered about Illustrator's Javascripts in Part 1 of this series. So without further delays, let's get started!

Want access to the full Vector Source files and downloadable copies of every tutorial, including this one? Join Vector Plus for just 9$ a month.

Purpose of the Script

We want this script to perform a very simple task. In Adobe Illustrator, when a user selects some objects filled with a CMYK Gradient Color, and executes this Script; the objects shall get converted into a Flat CMYK fill. This flat fill will be the mixture of all the colors available in the former gradient. See the image below for clarification. 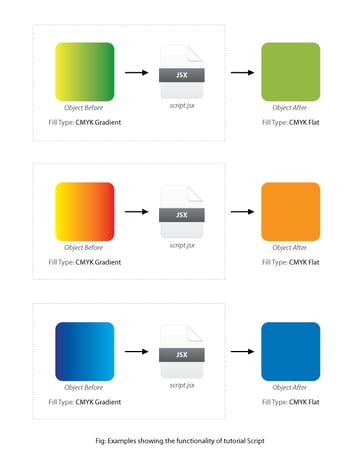 Hence, the aim of our script is to convert a Gradient CMYK Fill into a Flat CMYK Fill.

The logic for melting the colors of a gradient into a single color is simple and straightforward. We’ll pick all the colors from the gradient, find their average and assign it to the object as a new color. We can understand this in five steps, as shown below:

The above algorithm can be easily understood from the pictorial representation below.

We have seen a brief overview of the logic. Let's get started with the coding.

Step 1 - Starting with the Code Structure

In the code editing area, add the following code structure for certain validations and pre-requisite checks.

We are checking if at least one document with at least one object exists, so that we can work upon it. Next, we are checking whether the document color mode is CMYK or not. This is an essential step because all the logic for color conversion in this script is based upon CMYK colors. convertToFlat() is the main function which will contain all the logic. Next, save this file as test.jsx.

Let's now start with the main function – convertToFlat(). We'll check if any item is selected or not, because this script will work on the selected objects only. Hence, add the following lines of code to "test.jsx."

For each selected item, we are checking whether it is a Compound Path or a Group Item. If so, the script shall not execute anymore and return an alert message. Further, we are checking if the fill-type of the selected item is something other than Gradient Fill. i.e. If it is a spot color, flat CMYK color or a pattern; the script shall return an alert. These checks are performed because our script will only work for gradient filled non-compound path items.
Next, we will modify the Color conversion Block.

At this stage, we need to extract individual C, M, Y and K values for the colors residing at different gradient stops. For that, we will create some variables which will hold individual CMYK values. So, add the following variable declarations just inside the Color conversion block:

We will see the role of each variable one-by-one:

We have performed the validations and checks. We have also created necessary containers to hold color values. Next, we will run a loop which reads each gradient stop one-by-one. For that, create a loop, as shown below:

currentColor.gradient.gradientStops[k].color returns the color of a particular gradient stop for each iteration of k.

Inside the "if block" for GrayColor specification, add the following lines of code:

Hence, grayBox[k] will hold all the gray values for each color at their respective gradient stops.
Next, grayTotal will be the summation of these gray color values, which will be used later.

Inside the "else block" for CMYKColor specification, add the following lines of code:

To understand what is being performed here, we will take an example of Cyan color. cyanBox[k] is storing the cyan values for all the colors residing at different gradient stops. Next, cyanTotal is the summation of all these cyan values that are stored in cyanBox[k].

A similar operation is performed for magenta, yellow and black too. Once the summation is done, we can come out of the loop and proceed ahead for average.

We have gathered the individual summation of grayColor and CMYKColor for all the gradient stops. Now we need to average them. For that, close the "for k loop" and enter the following lines of code just after the closing bracelet of "for k loop", as shown below:

In the above lines of code, we are dividing individual summations of C, M, Y and K by numOfStops. i.e. If there were five gradient stops, we will divide the summation of individual C, M, Y and K values with five. Thereby, returning an average of five values. These averaged values are stored as newCyan, newMagenta, newYellow and newBlack respectively.

Note the tricky case of gray and black here. The summation of K is not just blackTotal. Rather, it's a sum of grayTotal and blackTotal.

Why we have done that? There are cases when a gradient fill may contain both GrayColor stops and CMYK stops. In that case, the gray Color values are added to the K value of the CMYK color. Gray can not be added to cyan, magenta or yellow. It will fall in the category of K only.

Now we have all the new averaged values for C, M, Y and K in hand. In the next step, we will implement these values as a new CMYK color on the current object.

To implement the new color, we will create a new CMYKColor object and modify its C, M, Y and K values to the ones that we just calculated in Step 7. To do that, add the following lines of code:

We have created a newColor object and assigned the values of newCyan, newMagenta, newYellow and newBlack as its C, M, Y and K values respectively.

Next, we have assigned the newColor as a fillColor to the current object. Hence, our final code will now look like the one below:

Save this script as "test.jsx" and open Adobe Illustrator. Next, create some objects with colorful gradient fills. Now to test this script, select some objects and go to File > Scripts > Other Script (Command + F12) and locate this script. 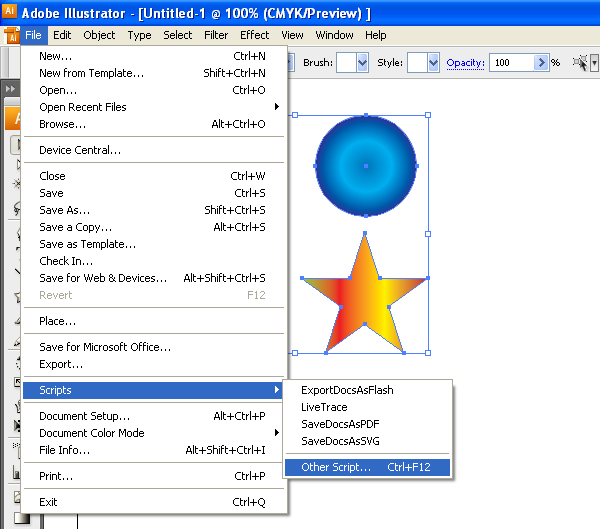 After successful execution of the script, you should see a melt of the gradients; something similar to this: 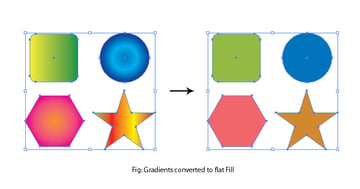 In this tutorial, we have seen how to melt a gradient into a flat color fill with the help of scripts. This script may be found useful in cases when you need to find the average of two or more colors. But the fruit of this tutorial is to understand the basics of scripting and their implementation with Illustrator.

There is a wide scope of vector creativity and innovation through scripting. Hope this two-part tutorial series will inspire readers and authors in bringing forward the essence of scripting. Thanks for your valuable time in reading this tutorial.

ScriptsVectorAdobe Illustrator
Did you find this post useful?
Yes No
Would you like to provide feedback (optional)?
Cancel Submit
Want a weekly email summary?
Subscribe below and we’ll send you a weekly email summary of all new Design & Illustration tutorials. Never miss out on learning about the next big thing.
Sign up