Quick Tip: How to Use Typography to Create a 3D Text Effect

Follow this quick tip and learn how to use typography to create a 3D text effect. It may seem complicated but it takes only a few fonts, the 3D options and some extra adjustments at the end. Let's start!

First open a new web document. Take the Type Tool (T) and type "Vector" or any other word. The font I've used is called Becker Black NF and can be found here. Go to the Object menu and select Expand then Ungroup. We will use these letters only as reference in order to arrange all the words inside them. 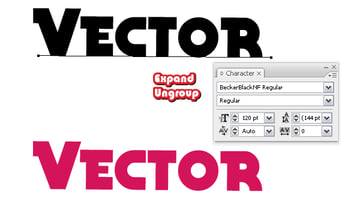 Before we start building the new letters made from words let me explain the ways to do it and the tools that you need. In the image below you can see five examples. As shown in the first example simply take the Type Tool (T) and start typing any word that you want. The same thing goes for the Vertical Type Tool (example 2). Example 3: use the Vertical Type Tool to type the word then rotate it 90 degrees. The same thing I did in the example 4 only this time I rotated the word minus 20 degrees or as much as needed until it matches with the edge of the letter. Example 5: draw a path using the Pen Tool (P) then switch to Type on a Path Tool, click on the path and start typing. All other words were written using one of these five ways.

In the Character Panel (Window menu > Type > Character) besides the type of font and the size that you are using, it's important the Set the tracking for the selected characters option. Choose a positive value if you want to increase the space between the letters or a negative value otherwise depending on how you arrange the words so they all match.

Now you can start to fill the letter "V" with various words. I recommend to begin with the bigger words and leave the smaller ones at the end. 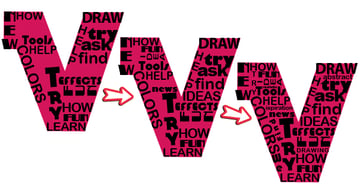 In order to help you, I listed in the images below all the fonts, the sizes and the tracking values that I've used for the letter "V". I haven't listed all the other in order not to make the tutorial too boring but basically they all repeat. 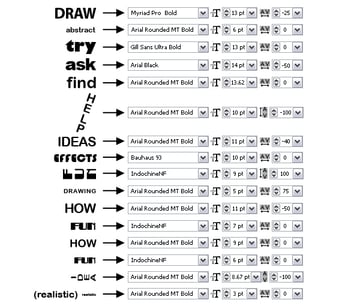 Among the fonts shown in the images are Indochine NF that can be found here and Anja Eliane from here. You should have the rest in the Illustrator's list of fonts. 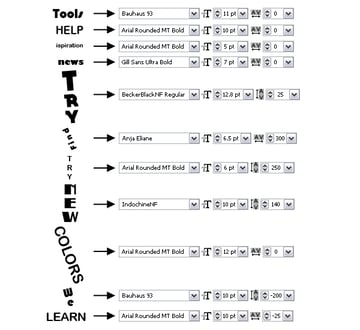 Continue with the letter "E"

Here are the next two letters, 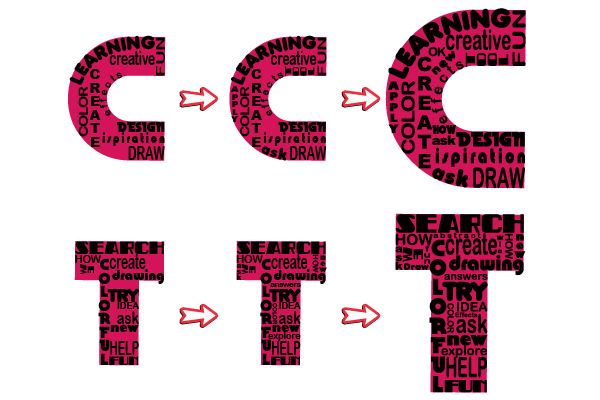 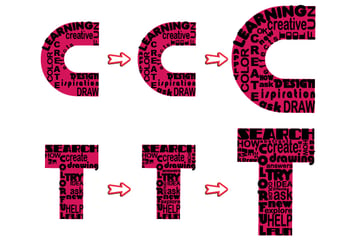 and the last two. 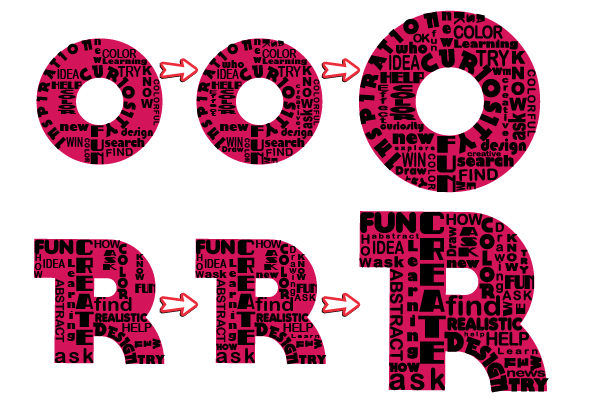 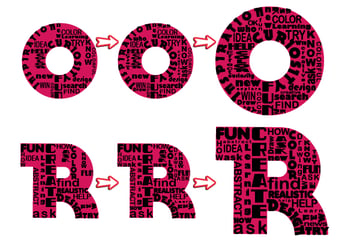 When you are finished go to the Object menu and select Expand Appearance then Expand. Now you have to arrange all the words as indicated for the letter "V" because if you leave them in random order after you apply the 3D effect everything will look wrong. Do the same thing for other letters. 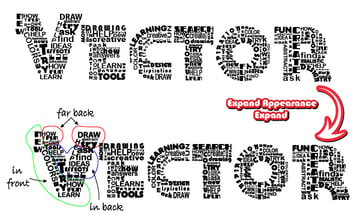 Select three words from each letter and fill them with the three shades of pink or any other colors. When you are done change the fill color of all the other to gray. If you want to finish faster select only one of the black letters then go to Select menu > Same > Fill color. As a result of this action all the black letters will be selected and you can fill them with gray all at once. 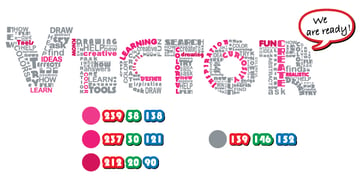 Now that all the letters are ready, select them all and from the Object menu choose Group. Next go to Effect menu > 3D and apply the Extrude&Bevel effect using the settings shown. Click the More Options button to open the entire dialog and move the light a bit as indicated. Select Expand Appearance from the Object menu when you are done. 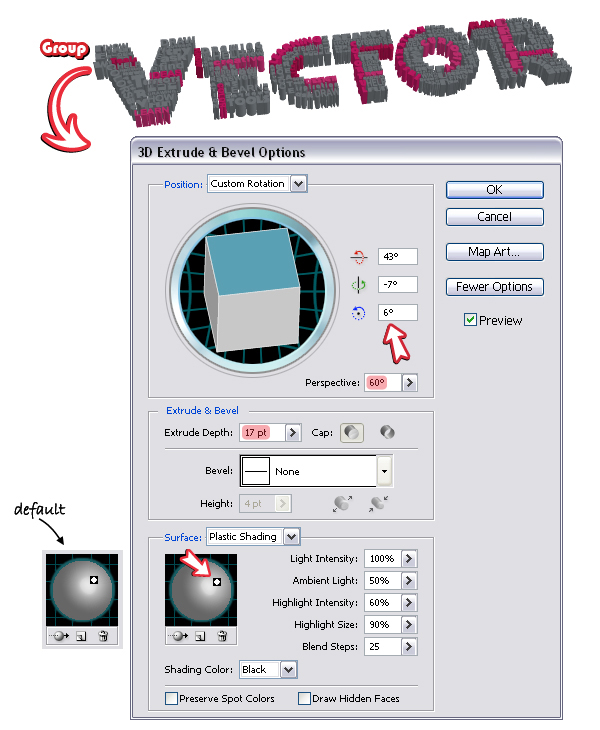 Earlier we used three shades of pink. Select using the Direct Selection Tool (A) only one of the letters (the front side) that you have filled with the lighter shade of pink then go to Select menu > Same > Fill color. As a result of this action all the words that were filled with this color will be selected and you can replace the fill color with the gradient shown for all of them at once. Set the angle value to minus 10 degrees.

Repeat this step for the words that were filled with the other two shades of pink and use the gradients indicated. 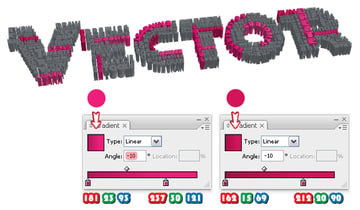 Next select using the Direct Selection Tool (A) the front side of one of the gray letters, go to Select menu > Same > Fill color and use the gradient shown to replace the fill color for all of them at once. Make sure there aren't gray letters left unselected before you continue.

Now, select any of the letters filled at the previous step with the Direct Selection Tool (A) then go to Select menu > Same > Fill color. Once you have all of them selected, Copy and Paste them then go to Object menu > Compound Path > Make. You will obtain the blue compound path shown below.

Note: You can't paste them in front (although it would have been easier) because each letter belongs to a different group and you will get a warning message when you will try to make the compound path. 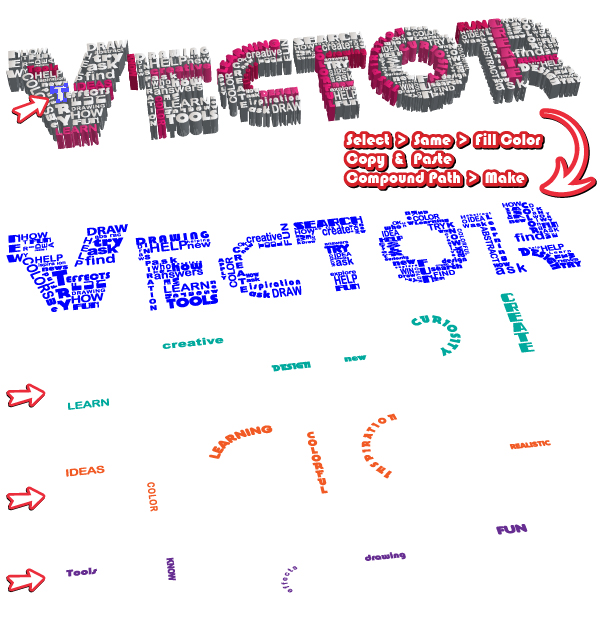 Once you've got the four compound paths arrange them back above of the 3D text. Select them all four and click Add to shape area > Expand from the Pathfinder Panel. As a result you will obtain a single compound path as the black one in the next image. 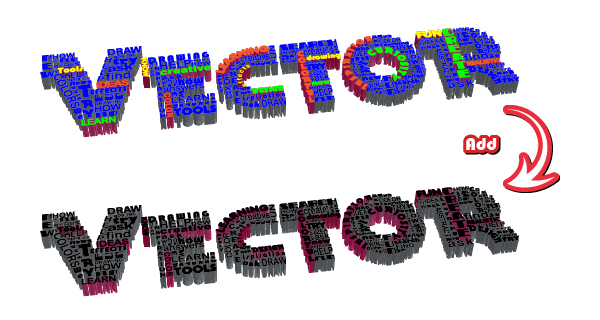 Fill this black compound path with the gradient shown and change the angle value to minus 70 degrees. It is called Neutral 7 and can be found in the Swatch Libraries menu under Gradients > Neutrals. Also change the Blending mode to Hard Light and reduce the Opacity to 50%. 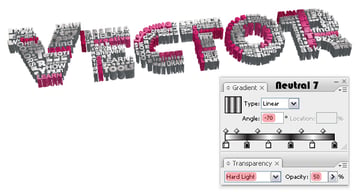 Copy and Paste in front the compound path with which you have worked at the previous step and delete all the existing appearances. Select green as the fill color or any other. Copy and Paste it in front one more time and change the fill color to black so you can differentiate one from the other. Before you continue go to Edit menu > Preferences > General and set the Keyboard Increment to 0.2 px. Now, move the black compound path just a bit by clicking once on the right and down arrow keys on your keyboard. Select the green and black paths and click Subtract from the Pathfinder Panel then fill the resulting compound path with white. Change the Blending mode to Soft Light.

To create the background, draw a rectangle using the Rectangle Tool (M) behind the 3D text. Fill it with gray then open the fly-out menu in the Appearance Panel and choose Add New Fill. Keep the same fill color then go to Effect menu > Texture and apply the Grain effect. Change the Blending mode to Soft Light but only for this second fill.

Take the Ellipse Tool (L) and draw three oval shapes as shown below in front of the background shape but behind the text. Fill them with black then go to Effect menu > Blur and apply a 15 px Gaussian Blur. Set them to Soft Light and lower the opacities between 50 and 80%.

To mask them, Copy and Paste in front the background rectangle and first delete the existing appearances. Select this shape and also the three ellipses and go to Object menu > Clipping Mask > Make.

Let's add some shadow and we are done. Select the group of 3D words (not the two compound paths on top) and go to Effect menu > Stylize > Drop Shadow. Set the values as shown and the text effect is ready. 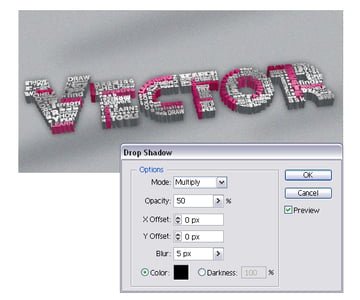 Here is the final image. Besides choosing the font types and arranging them all, which takes some time and energy, this effect is quite simple to make. I hope you like it. 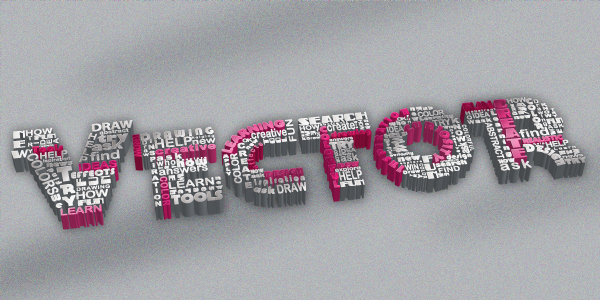 Text EffectsVectorAdobe Illustrator
Did you find this post useful?
Yes No
Would you like to provide feedback (optional)?
Cancel Submit
Want a weekly email summary?
Subscribe below and we’ll send you a weekly email summary of all new Design & Illustration tutorials. Never miss out on learning about the next big thing.
Sign up