Quick Tip: How to Illustrate a Valentine's Card with Cloudy Text Effect

Valentine's Day is coming soon. This is the day when you confess your love for another. Bouquet of flowers or other gifts are often given. Have you considered the gift of vector? For example to draw your gift in Adobe Illustrator. In this tutorial I'm going to show you how to create a Valentine's card with a cloudy text effect. To create this effect I'll be using a Scatter Brush and Inner Glow Effect.

First you need to create a Scatter Brush. Draw a small circle, use the Ellipse Tool (L) for this. Size is approximately 20 x 20 px. Use a color as shown in the image below. Then drag and drop the circle to the Brushes panel.

Select "Scatter Brush" in next window and click OK. Set the properties as shown in the image below. Then click OK again. The Scatter Brush is ready.

Take the Pen Tool (P) and draw a heart shape. 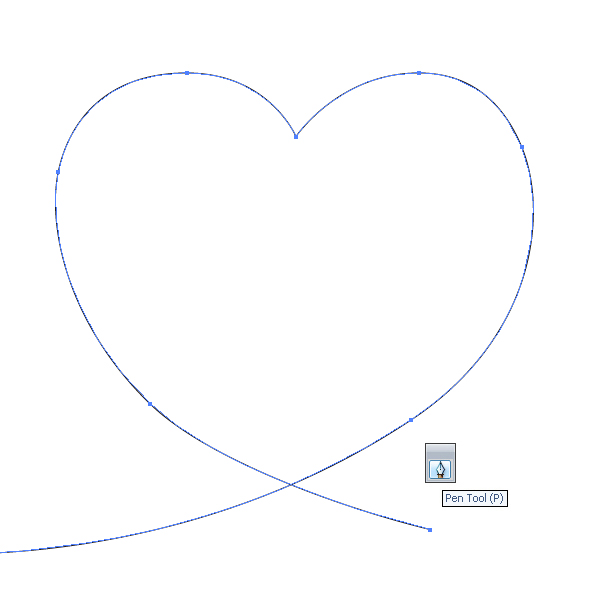 My first version was a little crooked. You can see the picture below. So if you have the same problem you should use the Direct Selection Tool (A) to edit Anchor Points and lines.

Then select the heart shape and click the Scatter Brush which we have created. The result is a lot of different circles lying along the original path.

Go Object > Expand Appearance to transform these circles into an objects. Do not forget to Ungroup them (Object > Ungroup). We need them separate in the next step. 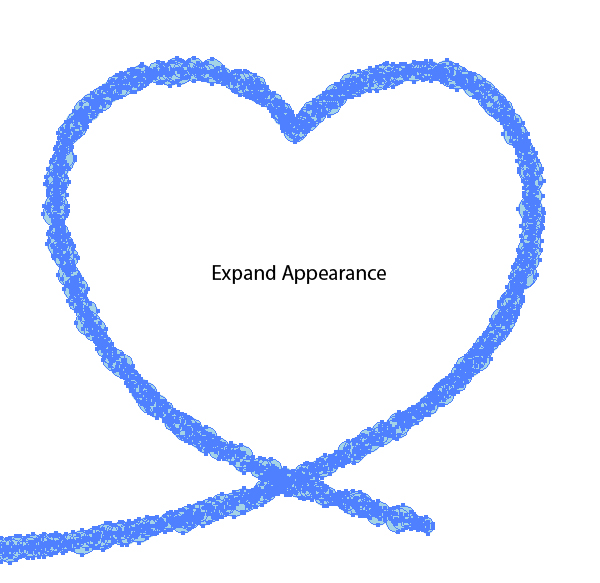 The easiest way is merge all circles into one shape. But then we can't make the overlap at the bottom of the heart. Therefore it is necessary to leave shapes separate at this point. To do this, merge circles in parts. First we select the line at the bottom left before the intersection. 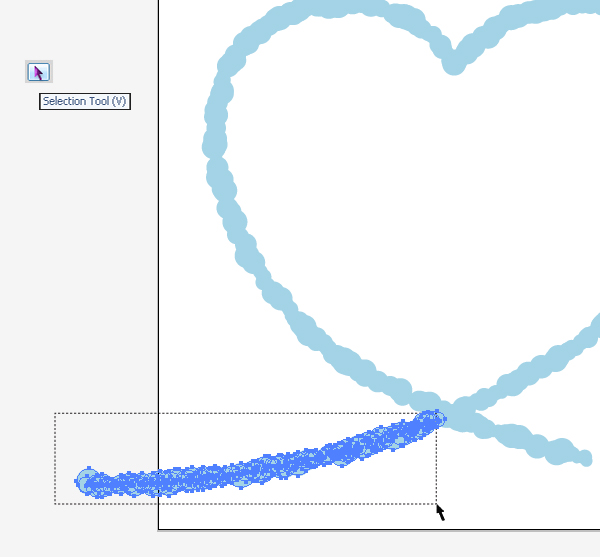 Go to the Pathfinder panel and use Unite to merge it into one shape. 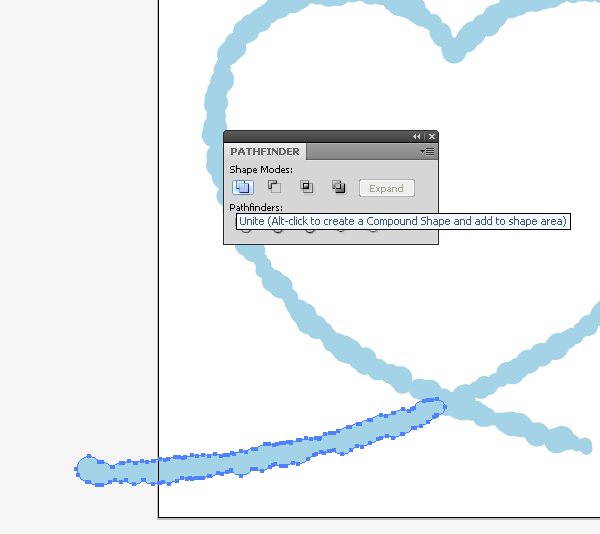 Next select the right side of the heart.

Merge these shapes with the Pathfinder panel.

Now you need to select the left side of the heart. 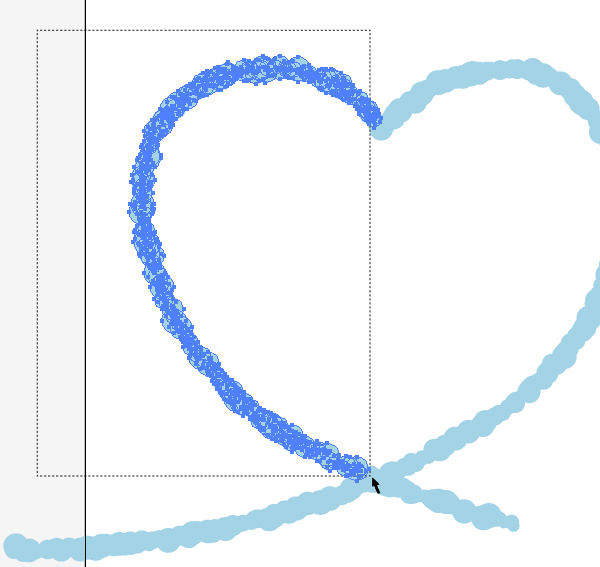 Then select all. And deselect shapes which are marked in the image below.

Merge the selected shapes. The resulting figure must be sent to the front (Object > Arrange > Bring to Front).

Now we need to trim the excess parts at the intersection at the bottom which are in the background. To do this select all and click the Trim button in the Pathfinder panel. After this command we will get a redundant invisible path without fill and stroke inside of the heart. We can get some problems because of this in the future. To remove it select all and click Object > Path > Clean Up > OK. Finally Ungroup shapes. 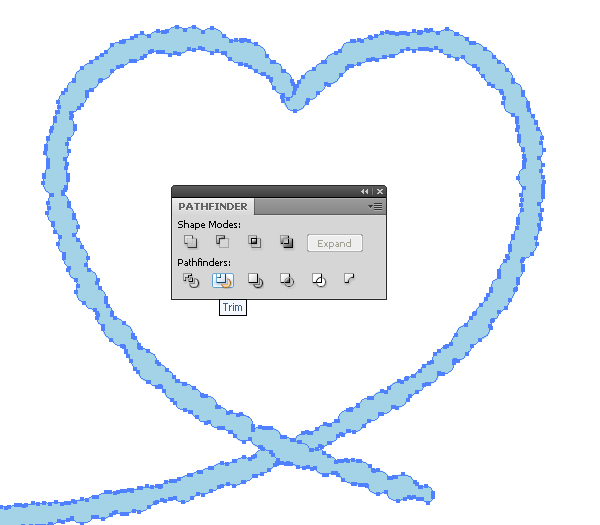 The points need to move slight to avoid the intersection. So select the right side of the heart. Then double click to activate Isolation Mode. Take the Lasso Tool (Q) and select the Anchor Points as shown in the image below. 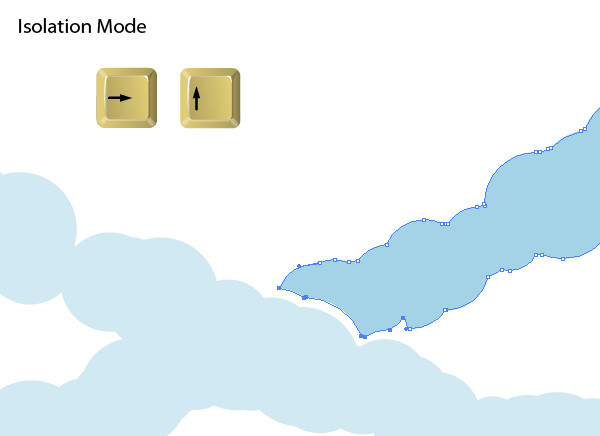 Deactivate the Isolation Mode (double click to any empty place on the artboard). Now you can merge the shapes on the top using the Pathfinder panel.

In order to fix the gap at the intersection activate Isolation Mode again. Use the Lasso Tool (Q) to select the Anchor Points which moved. But this time you have to be very careful.

Click on the keyboard once to the left and once to the down. Now the points are standing in their original places. 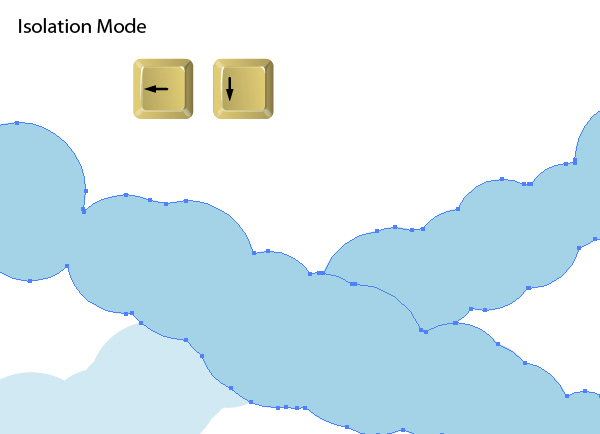 So now select all and go Effect > Stylize > Inner Glow. Set white color and properties as shown in the image below. 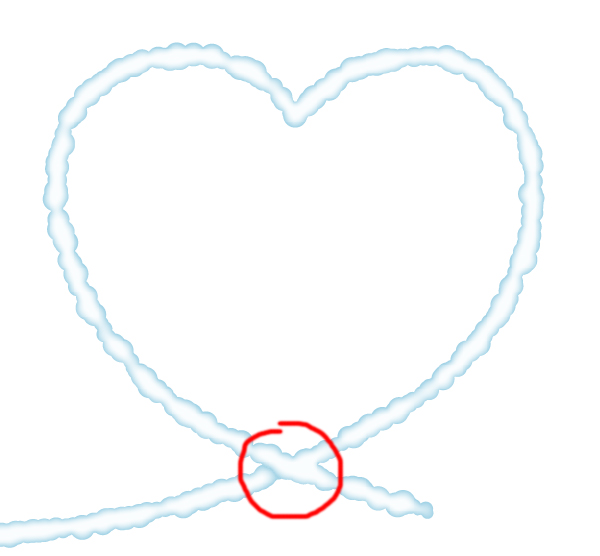 But it's easy to fix. Take the Knife Tool and cut a narrow strip near the place of the contact both shapes. After that Inner Glow Effect will work fine. 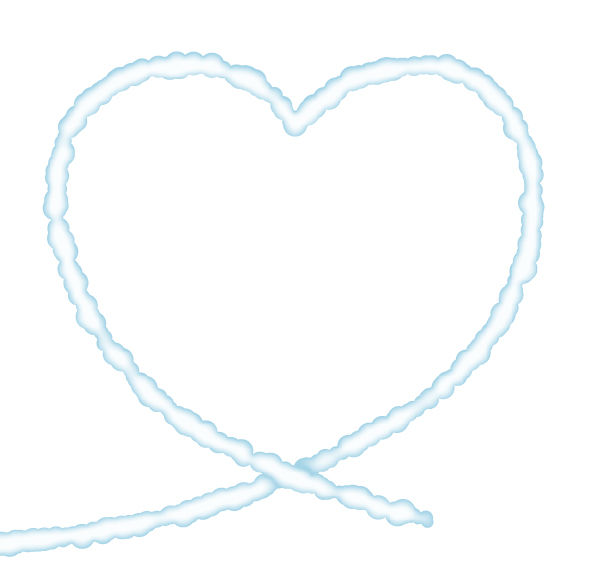 Draw some smaller clouds. Double click to the Scatter Brush icon in the Brushes panel to set new properties. Reduce the Size.

Take the Paintbrush Tool (B) and draw several short lines. The result is a small clouds. 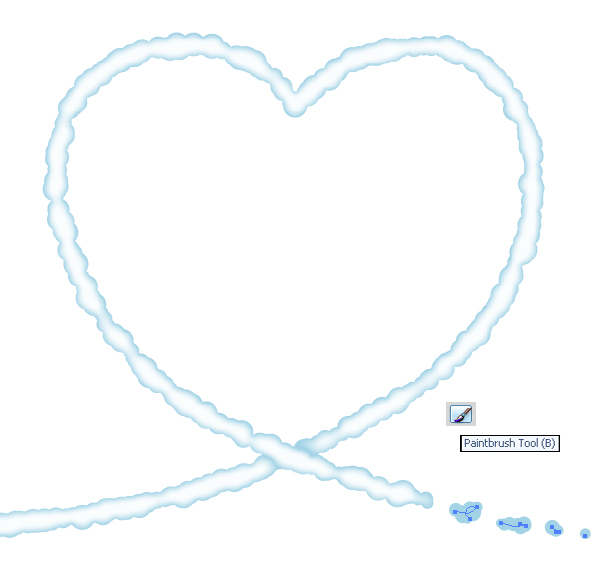 Then go Object > Expand Appearance to transform these clouds into an objects. Next merge them by command Unite in Pathfinder panel. You should also Ungroup the resulting shapes. 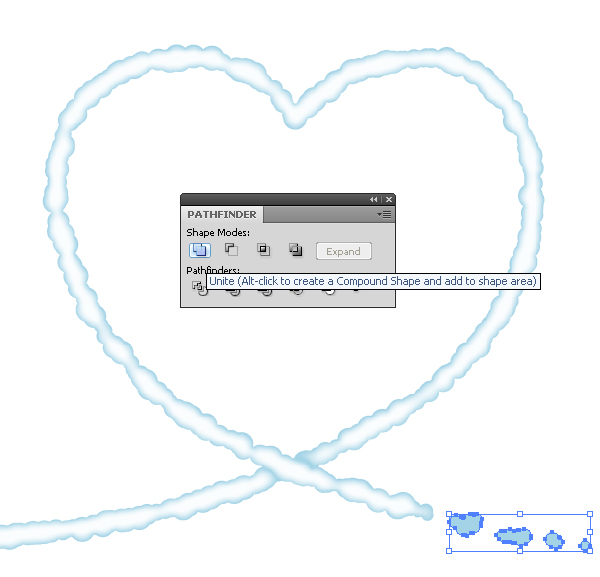 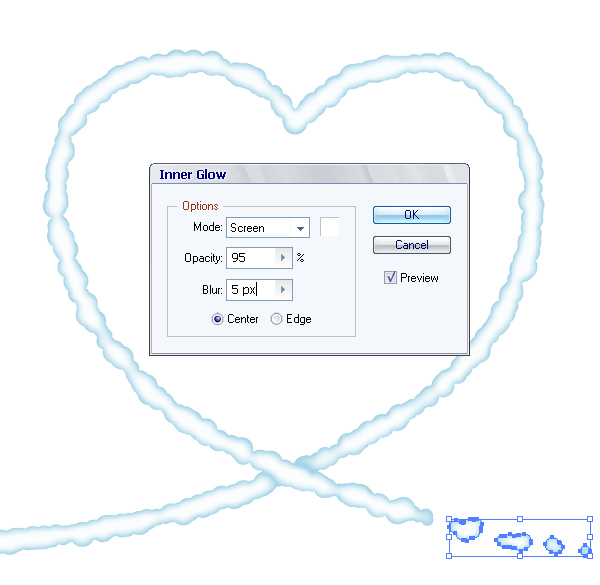 You can see that on the smallest clouds shade is too strong. So we need to fix it. 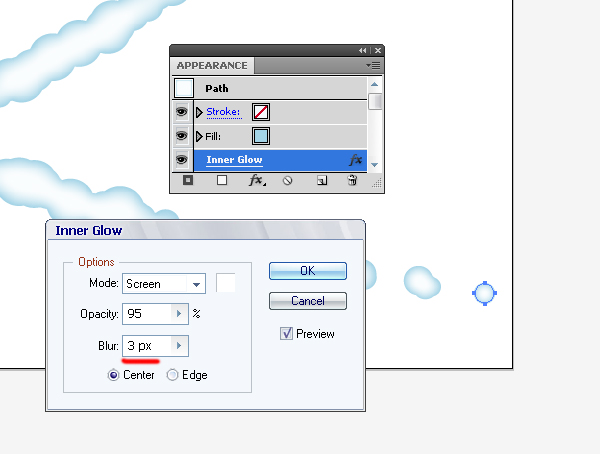 Now draw the inscription "I love you". Use the Scatter Brush and the Paintbrush Tool (B) for this. 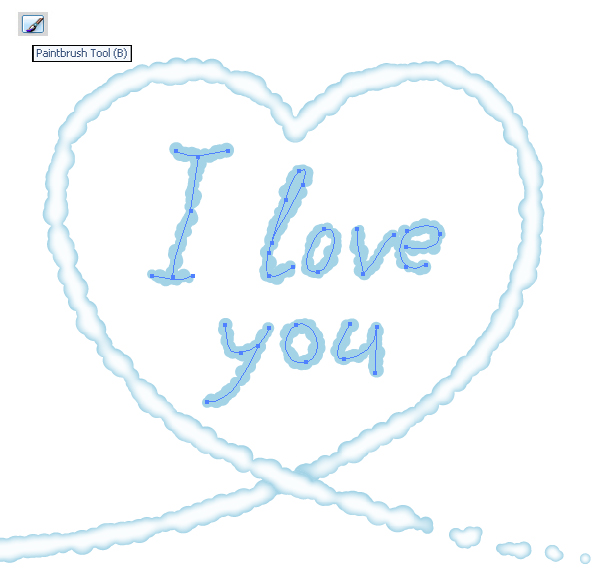 Then go Object > Expand Appearance. Next merge all shapes.

Illustration is almost ready. It remains the most simple to add background. Draw a square for this with the Rectangle Tool (M). The size is the same as the artboard. Fill is a linear gradient.

Send this square to the back (Object > Arrange > Send to Back). Now you need to make a Clipping Mask to hide the protruding parts of the clouds. Draw another square on top of all objects with same size as the artboard. Select all and go Object > Clipping Mask > Make (Ctrl + 7).

Your cloudy Valentine's card is ready. You can use such technique to write your personal declaration of love with the name of your favorite. For sure it will be a very nice. Be in love and happy Valentines day! 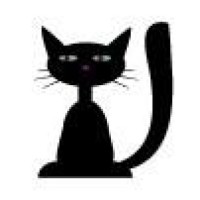 Roman Volkov
My name is Roman Volkov. I live in Russia. I am a graphic designer and microstocker. Adobe Illustrator is my passion. But my first profession is a meteorologist. Yes, I'm the person who makes weather forecasts.
Weekly email summary
Subscribe below and we’ll send you a weekly email summary of all new Design & Illustration tutorials. Never miss out on learning about the next big thing.
Advertisement
Translations