Open a new document and create a blue rectangular shape the same size as your canvas. I used 8 × 6 inch in RGB mode with 72dpi for the new document and a R:0 G:173 B:238 as background color.

Using the type tool click anywhere in the document and type a letter, I chose T. Since we want to create snowflakes the letter should be colored white. I set the font size to 80 pt. The font I'm using is "Sanchez Regular" by Latinotype, a Geometric Slab Serif font. 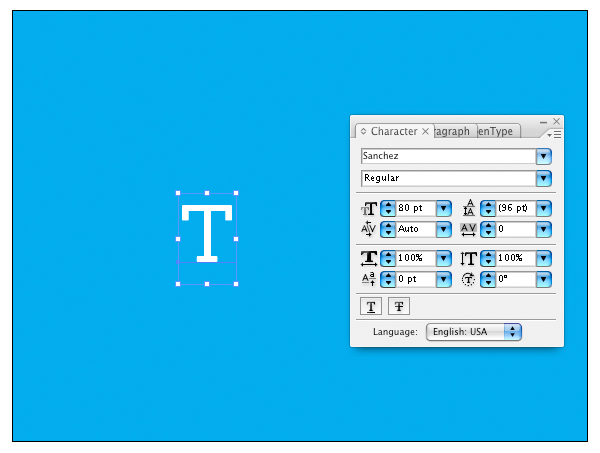 With the T selected go to Effects > Distort & Transform > Transform. In the Transform window the first thing you should do is click "Preview" at the bottom right.

In order to get the typical snowflake effect, we will create copies of our original T and move them upwards as well as make them smaller.

We will start by creating 5 copies of the letter. Not much will happen at this point. 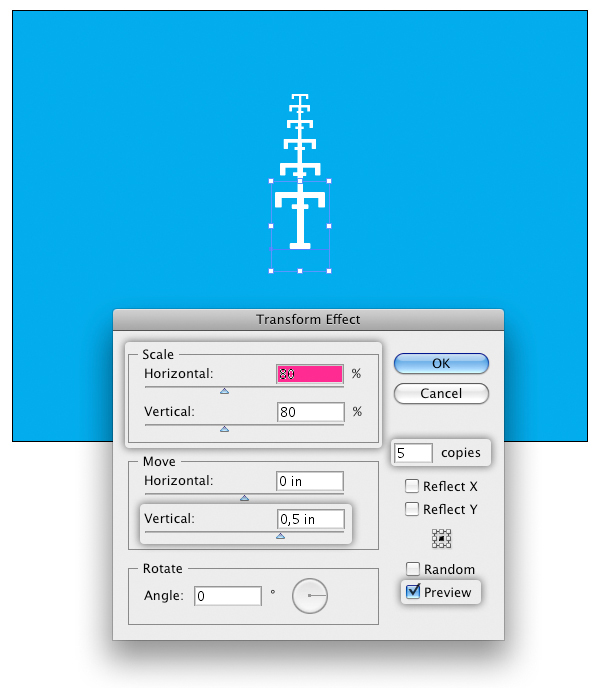 Now we will have to go to Effects > Distort & Transform > Transform again.

Because you already applied this effect before, you will get a warning window. Select "Apply New Effect". This will add a second Transform effect to the letter, instead of editing the one you set before.

In this step we will rotate the letter and its copies to form a full circle snowflake.

We want to have a snowflake in a star shape with 6 tips. After a little math, this means that we need 5 copies of our letter (the original plus 5 additional instances). This also means that we have to divide a circle of 360° by 6 resulting in 60° for our angle. 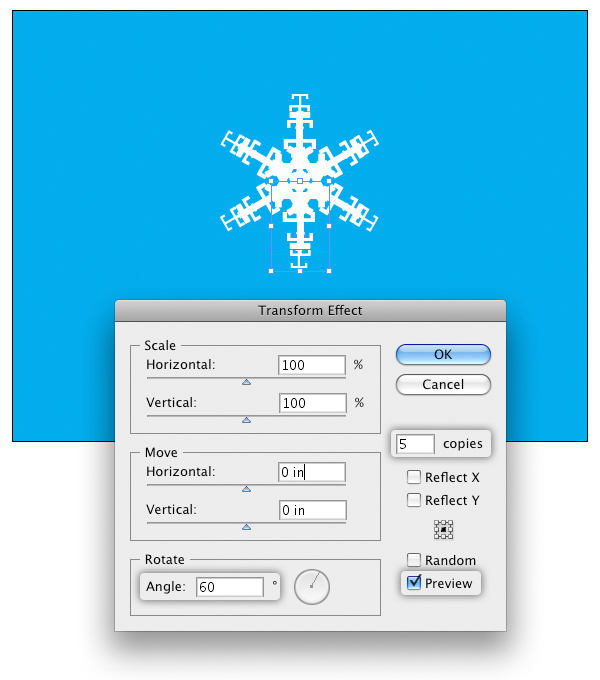 Now comes the fun part: Playing around with the Transform Effect's settings! 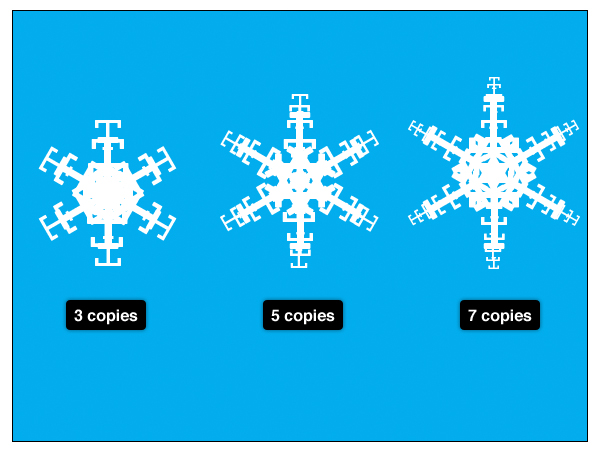 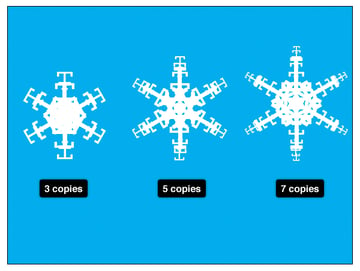 In the picture above you can see how the snowflake changes, if you change the number of copies in the Transform Effect.

This example shows how changing the Scale results in different snowflakes. 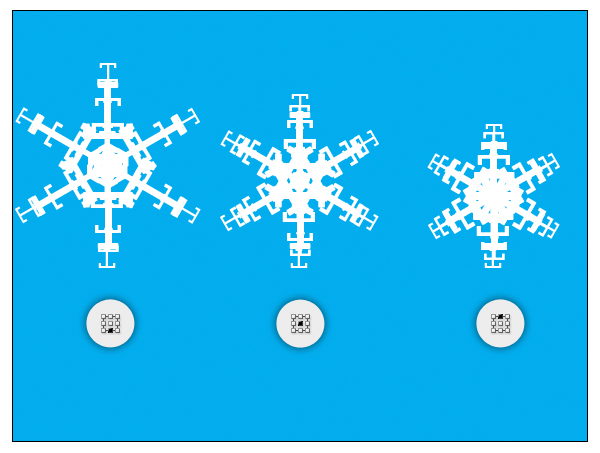 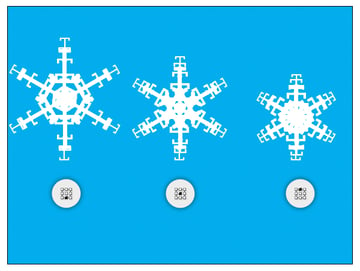 Changing the Reference Point of the Transform Effect gives you a variety of results as well.

As every letter gives a different end result, your decision which letter to use can make the difference, too.

A symmetrical letter will make a better snowflake-like results than any other letter. Such letters are: A H M O T U V W X Y. Of course this also depends on the font you choose to use. 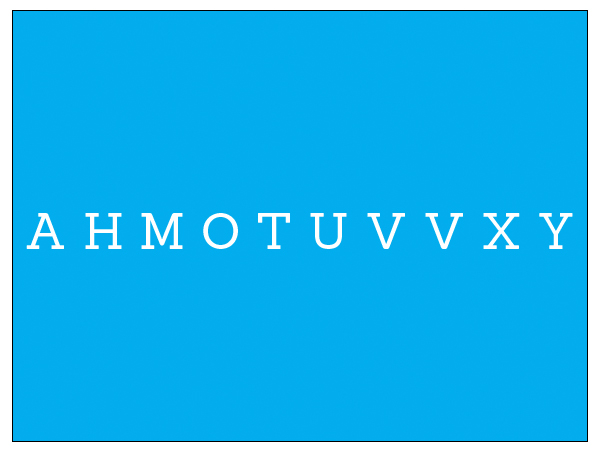 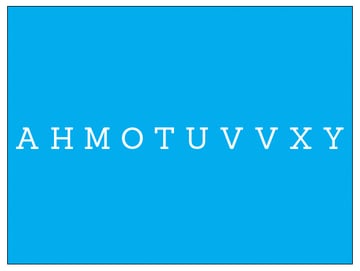 The choice of font will give completely different results as well. From my testing I found that using a Geometric and Slab Serif font will work best. The very strong and often simple serifs of those fonts give edges to the snowflake similar to real ones. A Geometric font helps, achieving a proper symmetry in your snowflake.

Below you can see a variety of snowflakes based on the "Sanchez Regular" font. Each snowflake has its own settings to the Transform Effect, just as in real life every snowflake is unique. 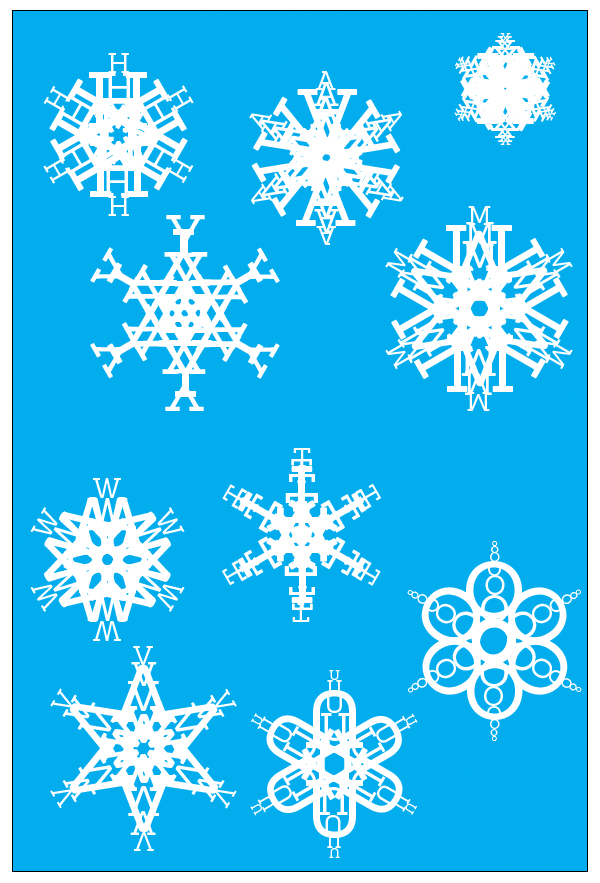 In the next example I changed the font to the ever so famous Helvetica. You can immediately see how different the snowflakes look.

A Sans Serif font like Helvetica has less structure and the snowflake appears more artificial and clean. 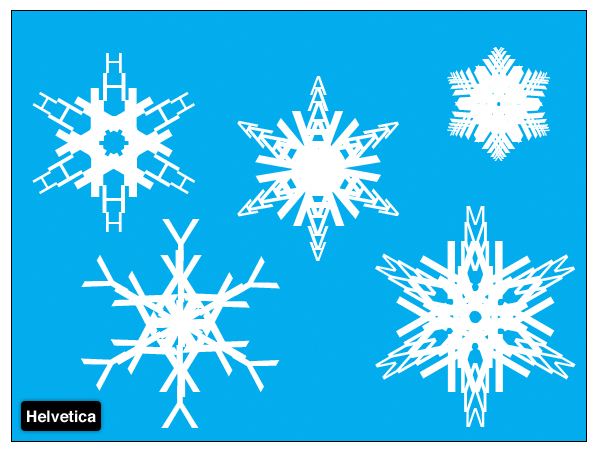 For the next set of snowflakes I used Times, a classic Serif font. The snowflakes look lighter and more sophisticated. 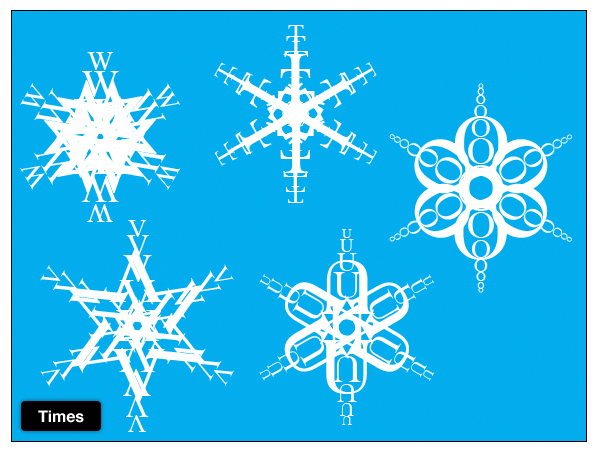 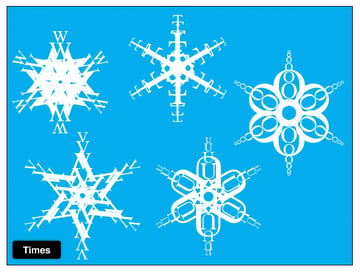 Now that you have a basic understanding of the principle, you can create an artwork based on these snowflakes. If you decide to do so and want to change the size of your snowflakes you can do so in 2 ways.

You go to Illustrator > Preferences > General and check the box "Scale Strokes & Effects". If you do so you can scale the letters/snowflakes using the transform tool and automatically scale the Transform Effects. If you leave this box unchecked you will have to adjust the Transform Effect manually again. 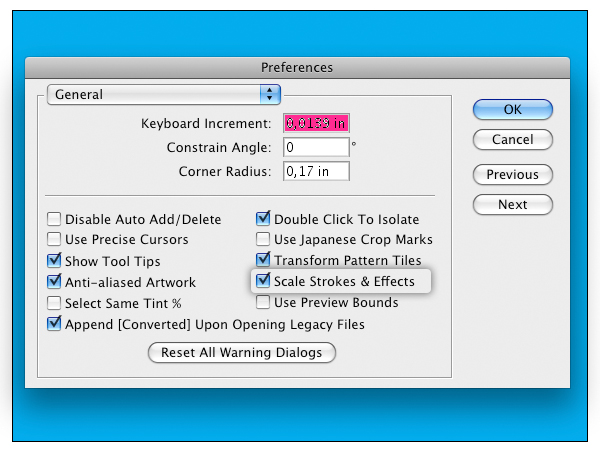 Another way would be to create your snowflakes and then turn them into Symbols. Therefore you only have to open the Symbol Window and drag and drop a single snowflake into it. Since the snowflake is white, as is the background of the Symbol Window, I recommend naming the symbol properly to find it easier later.

In order to put my snowflakes into a layout, I decided to make a simple composition with 3 in the front and some smaller ones in the background. I chose to turn the single snowflakes into symbols and spread them around the canvas, sizing them down proportionally. I applied a Gaussian Blur effect as well as lowering the opacity to achieve the appearance of depth.

What you make out of this effect is entirely up to you! The most important part is to play around with fonts and settings and create something unique. I hope you've enjoyed this tut. 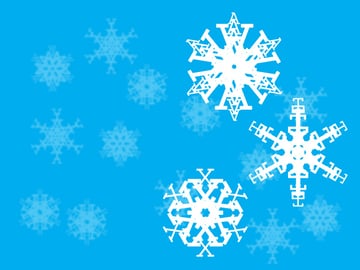 Tools & TipsText EffectsVectorAdobe Illustrator
Did you find this post useful?
Yes No
Would you like to provide feedback (optional)?
Cancel Submit
Want a weekly email summary?
Subscribe below and we’ll send you a weekly email summary of all new Design & Illustration tutorials. Never miss out on learning about the next big thing.
Sign up

Anne Elster
I am a Hamburg, Germany, based full-time web designer graduated in Spring 2007 and working full-time since then. In my spare time I create all kind of artworks, including vector and typographic art.