The fact that Group/Ungroup and Combine/Break Apart are two sets of complete synonyms, you might not think that Inkscape would have these as separate functions. While these are pretty similar at first, I'll show you just how different they actually are.

Group/Ungroup is simply an Object operation. If you make a selection of a bunch of objects and click Object > Group, each one of those objects will group while keeping their relative size, relative position, fill, and stroke. Generally, this makes it easier to organize your more complicated drawings. Of course, Object > Ungroup will return your group to the original selection of separate objects.

Combine/Break Apart is a Path operation. A selection of similar objects as shown below will return something drastically different when using Path > Combine. This is because Combine groups the selected paths to make one entire object that inherits a single fill and stroke. Using Path > Break Apart will restore your selected objects, but you'd better say goodbye to their original styles.

With Group really only having the use of organizing objects, the magic of Combine is really what sets them apart. Let's say we want four circles behind our little fruits here, but we want a single radial gradient to really give it that cool effect. Select those circles and click Path > Combine.

Now these four circles are virtually a single shape, but as you can see, they still hold their own separate nodes. This will allow us to set the Fill to a Radial Gradient that will continuously spread through all four circles. Of course, you can move and adjust the gradient using the Gradient Tool, but the cool principal remains: Combine gives the illusion that multiple objects act as one.

Boolean operations in Inkscape include Union, Difference, Intersection, Exclusion, Division, and Cut Path. Unfortunately, most of these are limited to just two object selections per operation.

With the power of Combine, we can beat the system! As you'll see below, we have 4 nicely placed circles that we're going to Path > Combine.

We want to do the boolean operation on that green circle back there. So with our newly combined object selected and the green circle selected, head up to Path > Intersection.

Below, you'll see what we ended up with. It's not particularly charming just yet, but the result of this cool shape is what we wanted (and it was super easy to make).

If you had tried this just by selecting all of these shapes individually, or even grouping them, it would either result in deleting your shapes (probably just from boolean failure) or it would do nothing at all. The reason this works is that the four circles are theoretically a single path according to Inkscape.

Here's a pretty neat design I ended up with just by playing around with this goofy shape. Neat stuff!

Well, now I feel like I've left Grouping out of all the fun. Like I said earlier, Grouping is very simply a way to keep selections together, but it's also a great way to align your content.

Below, I have eight sets of fruit in which I've grouped the green background circle for each (just for organizing). What I want to do is center align these eight objects to the red background box.

To do this, we'd use Object > Align and Distribute. So with all eight objects selected, we'll do a quick tap of Control-G to Group them all. Now while holding Shift, select your new group and then the red box - in that order. You can now align vertically and horizontally as a group.

Note: If you do this without grouping, it will align all of your objects separately. In this case, our objects would be overlapping all over the place... a disaster, really.

With another quick tap of Shift-Control-G, we can Ungroup our objects and continue working with perfectly aligned items. Thanks, Grouping!

That Groups Things Up!

While Grouping isn't nearly as much fun as Combining, at least you know why these two similar sounding functions are entirely different. Hopefully you can use these cool tips and tricks in your Inkscape projects. Thanks for reading!

The fruit vector icons in this tutorial were purchased from GraphicRiver. 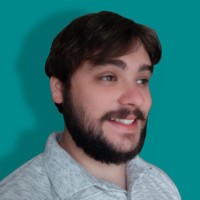 Aaron Nieze
Aaron Nieze is a Graphic Designer from Chicago, Illinois. He started in the field of web design and programming, but the design soon became the main act. He is now a graphic designer at Shmoggo.com working mostly with vector based company design projects. Aaron started writing with Vectortuts+ in 2013 with a focus on the free vector software, Inkscape.
Weekly email summary