Modeling the Human Face in Illustrator

With a simple and direct methods described in this tutorial, you can create a female portrait easily. This process will have you creating anatomically correct human faces in no time. 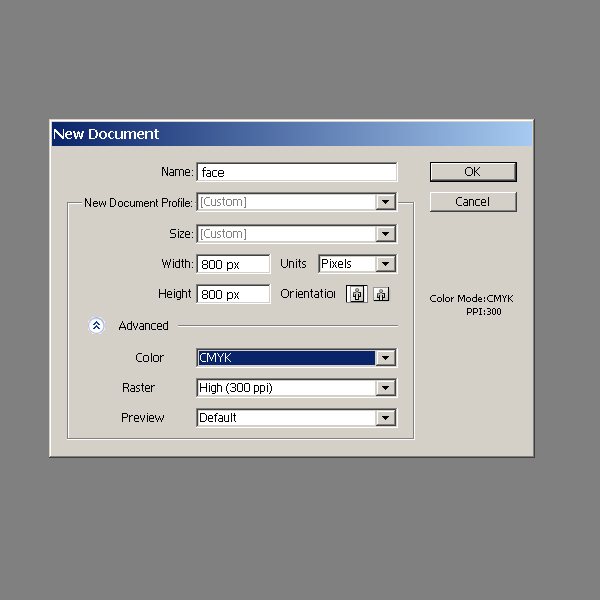 We start with the construction of the ideal female proportions of the head in full face. Create two guides, horizontal and vertical that cross in the center of our document.

Take the Ellipse Tool (L) and create a circle centered at the intersection of the guides, move the cursor to the mid point of intersection and extend the circle, while holding down Alt + Shift to constrain. Set it to no fill with a s black, 1 pixel stroke. The diameter of the circle will be equal to the width of the head. To simplify the calculations, I used a circle 250 pixels by 250 pixels.

In the left and right points of intersection with a horizontal guide, create lines by using the Pen Tool (P), while holding Shift.

Let's split this into five sections. Select both lines and go to Object > Blend, apply the setting you see below.

The diameter received five parts. Each part is equal to the width of one eye. We'll be placing the eyes under are 2 and 4.

Create a new line by using the Pen Tool (P) at the bottom point of the intersection with the vertical guide (point A).

Select the bottom line, go to Object > Transform > Move... at a distance equal to the width of the eye (50 pixels) and press Copy. Now press Command + D. Point A will be the tip of the nose.

Now press Command + D. Point A will be the tip of the nose. 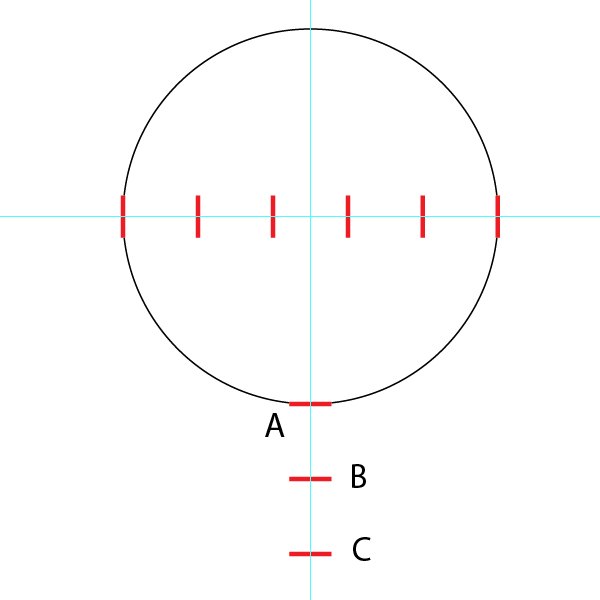 Now divide segment A/B in half and get point D. Select line A and B, and create a Blend. 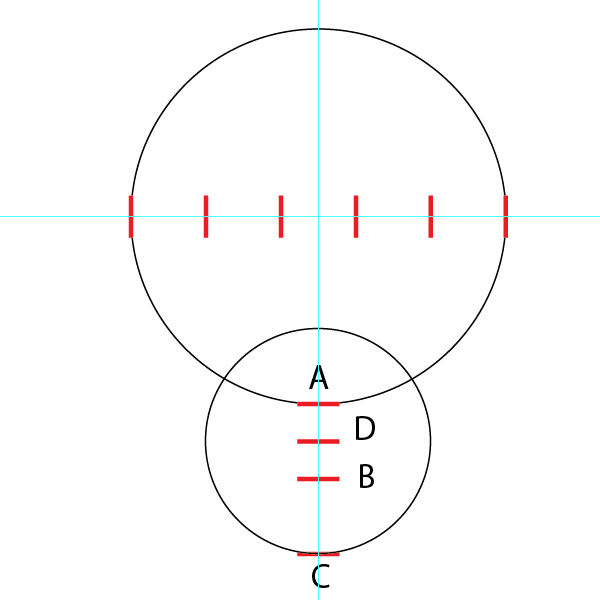 Create a tangent of the circle to the right and left, using the guides. Place the guides and rotate, using the Rotate Tool (R).

We connect the circles of lines E and F on the guide. Connecting lines E and F at the points of contact with the larger circle line G. Line G is the upper limit of the eye. 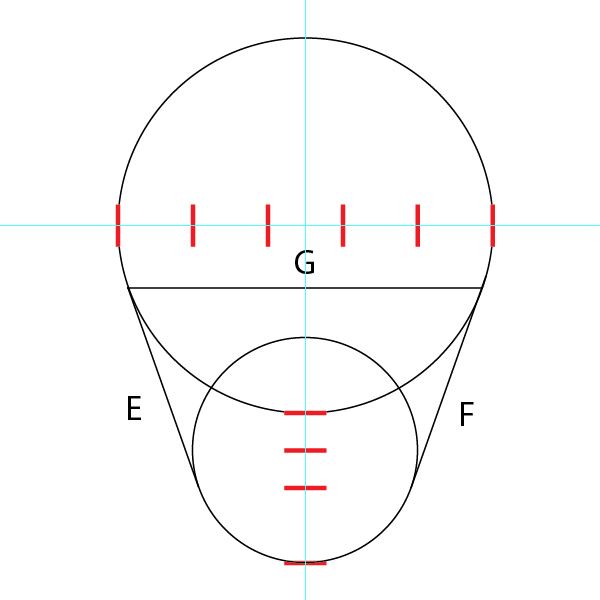 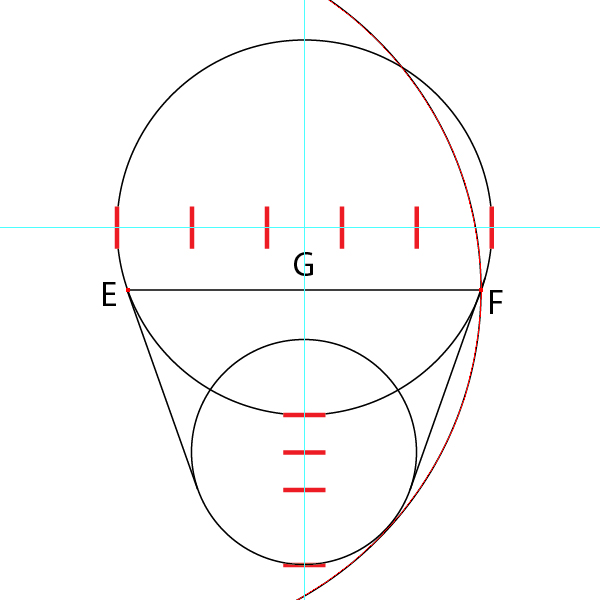 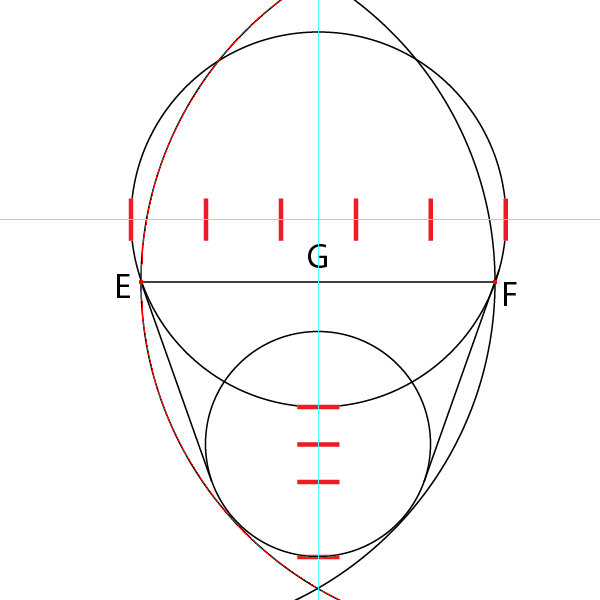 Cut the circle with scissors and remove the unnecessary parts. 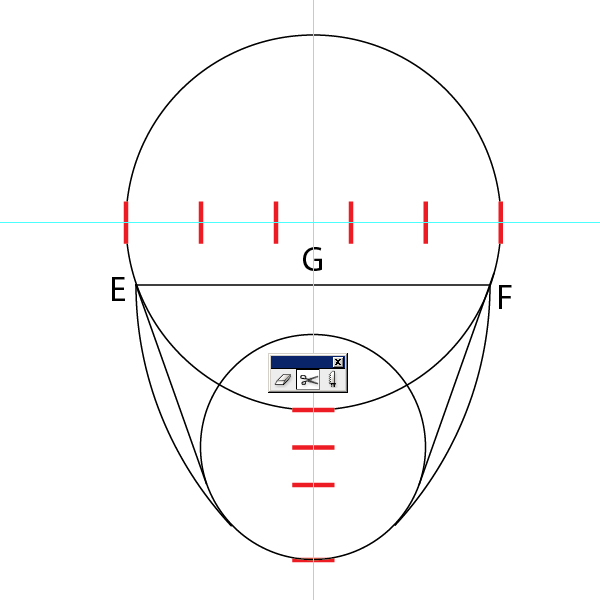 Create two vertical lines at points E and F by using the Pen Tool (P). These lines are the lateral limits of the head. 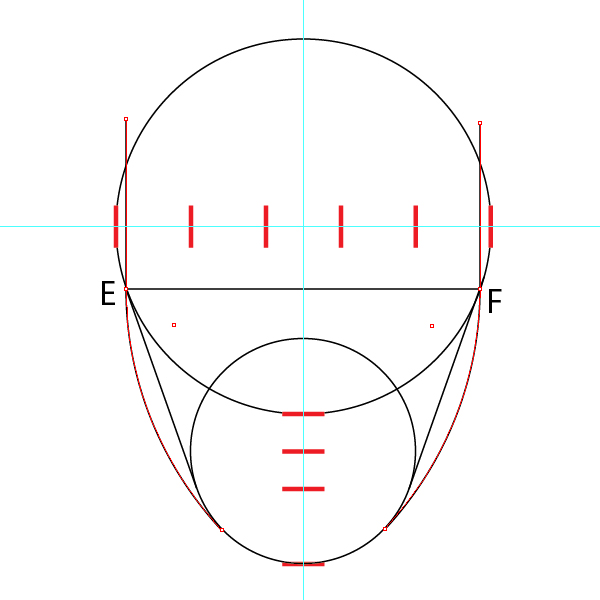 Cut along those lines using the Scissors Tool (C) and remove unnecessary parts of the template. 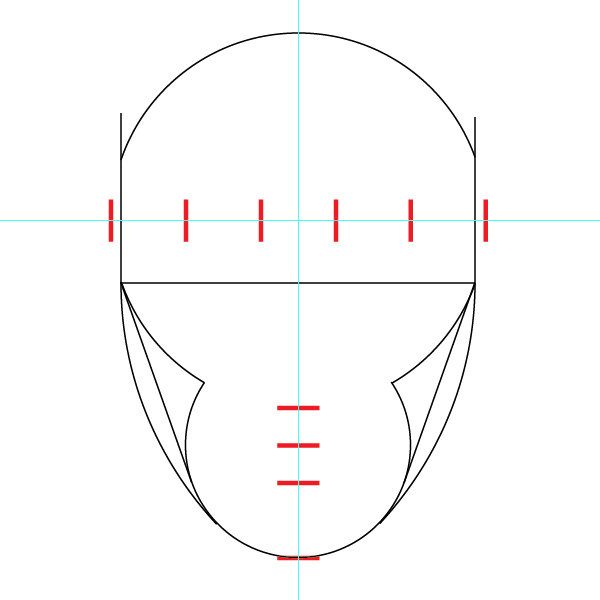 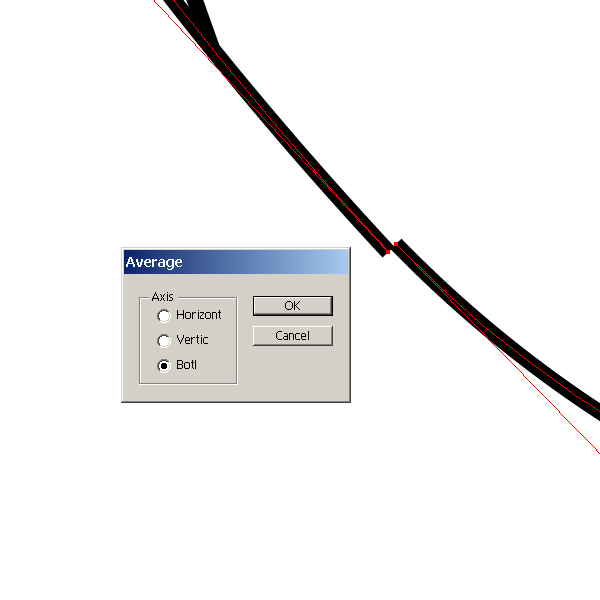 Thus, we close all the paths. The darker area indicates the deepening of a cheek bone. 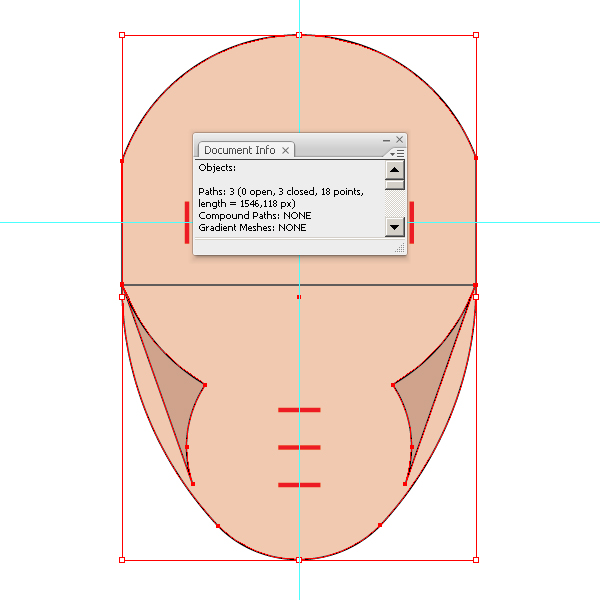 We lower the vertical line down to where the eye will be located. Rename the layer in the "template" and lock it.

Now create a new "eye" layer at the top. We will start to create eyes. Eyes are probably the most important part of the human face, "eyes are a mirror to the soul." Create an ellipse by using the Ellipse Tool (L). Select the right and left anchor point and convert the points to corners.

Now raise the outer corner by turning the eye counterclockwise.

Select the eye and add anchor points. Making the internal part of the eye slightly concave by using the Direct Selection Tool (A). Convert he extreme left anchor point to Smooth. 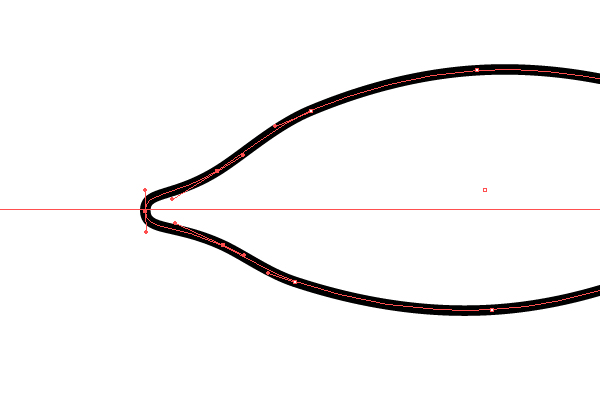 Now we'll build the lashes. Take the Pen Tool (P) and create the shape of the lashes. Also, create a line to emphasize the thickness of the lower eyelid. 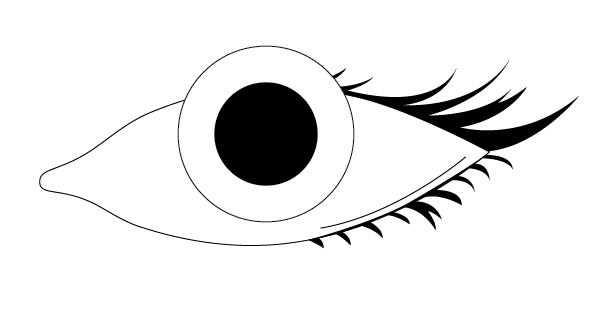 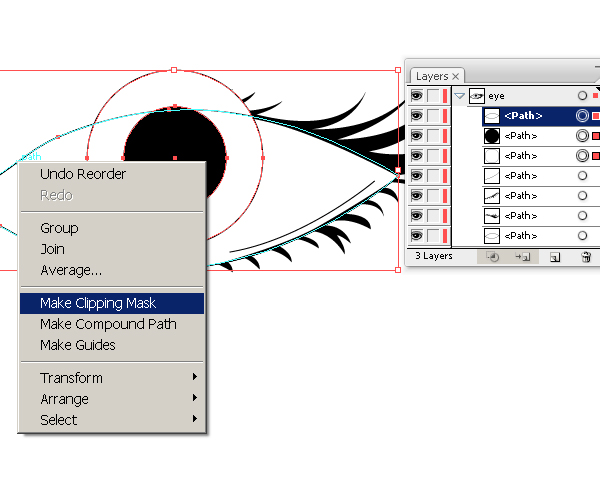 Now we'll make an art brush. First create an ellipse, then convert the right and left anchor point to a corner. Drag the shape to the Brushes palette. Drawing the fold of skin, parallel to the boundary of the upper eyelid using the Pen Tool (P). Now apply the new brush. 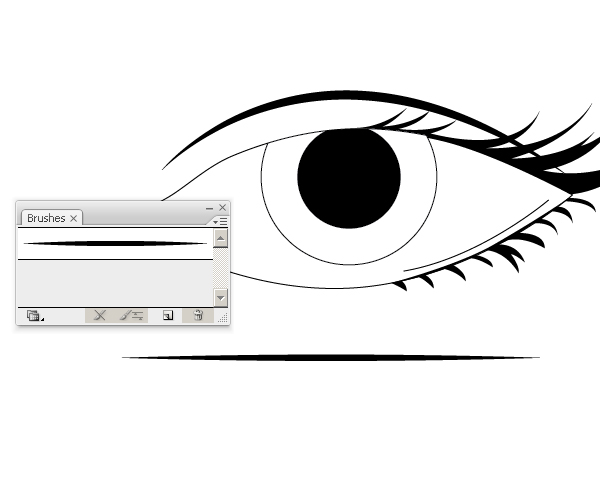 Select all the objects the of the eye and group them (Command + G). Now go to Object > Transform > Reflect, choose Vertical and press Copy. Place the eyes in the right places of the template. 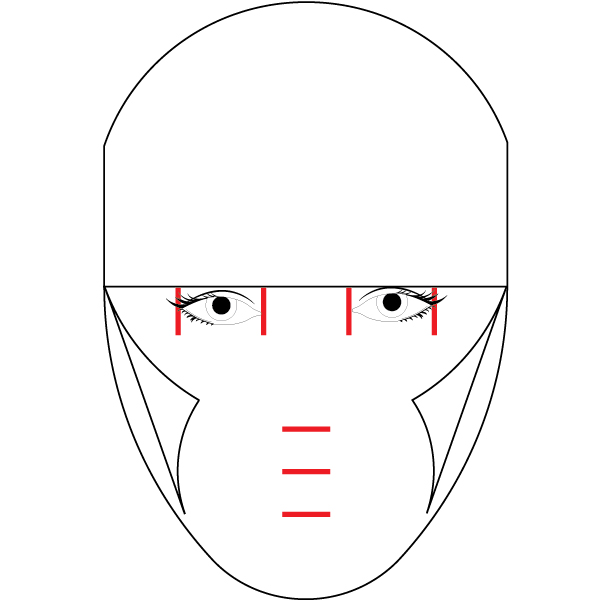 Now we'll make a new "mouth" Create a form for the upper and lower lips by using the Pen Tool (P). Place the lips in the correct places of the template. 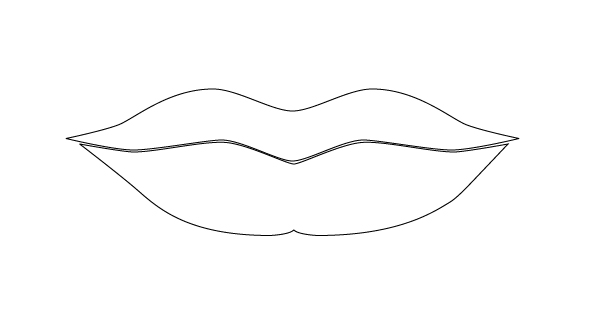 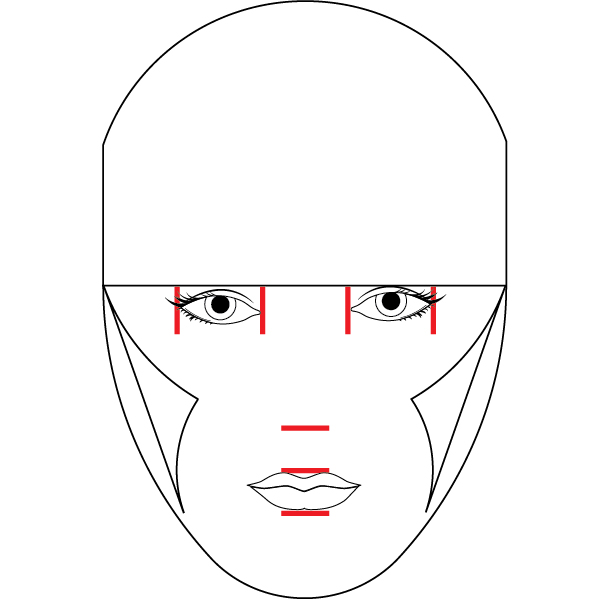 Now let's make a new "nose" layer. We denote the minimum number of lines to the nose. The tip of the nose should be located at the intersection of the straight lines shown below.

Create an ellipse, drag it into the Brushes palette to make a new art brush. Select the nostrils and apply the new brush.

Take the Pen Tool (P) and create a curve in the form of an eyebrow. Create a new art brush and apply it to the curve.

Now we'll create a new "ear" layer. Take the Pen Tool (P) and create the shape of the ear and skin folds. Select all the objects of the ear and group them (Command + G).

Now go to Object > Transform > Reflect, select Vertical and press Copy. Place the ears in the correct areas of the "template." The height of the ear is the height of the upper eyelid to the tip of the nose.

Now we'll make the "face" layer. Copy the path from the template and paste it in this layer. 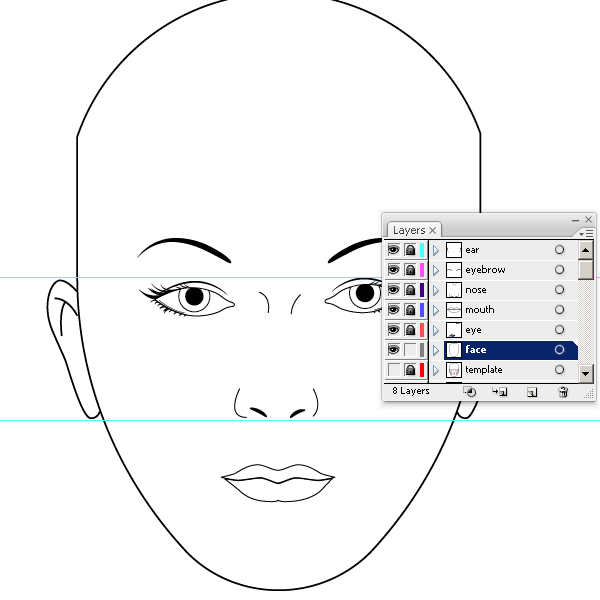 Now we'll create a new "neck" layer. Use the Pen Tool (P) and create a shape of the neck. 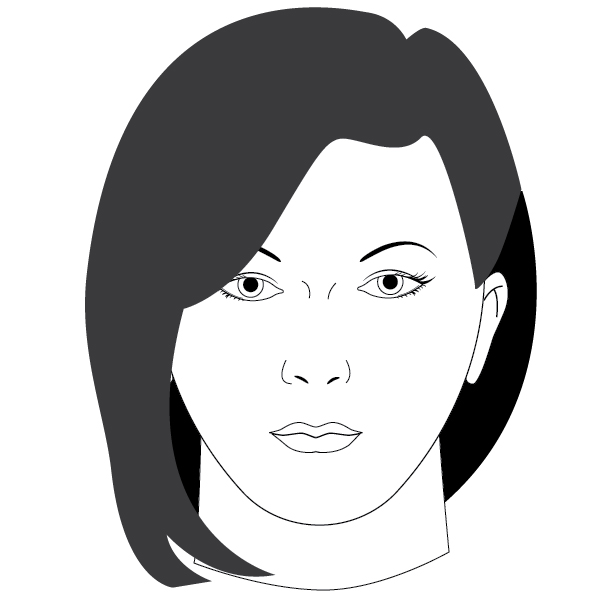 Now we'll decide where to place the source of light. I placed the light source right in the center. Location of the light source determines where we will have flashing in her eyes, and in the future it will determine the location of the shadows on the face. Create glare in the eye by making an ellipse, fill it with white, and give it no stroke. 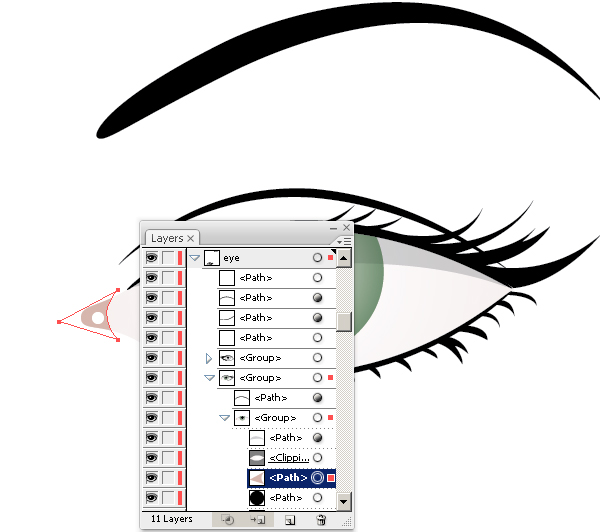 Now create the other eye corner for the left eye. Pick a place on the right.

Create a series of white ellipses to use as highlights on the lips. 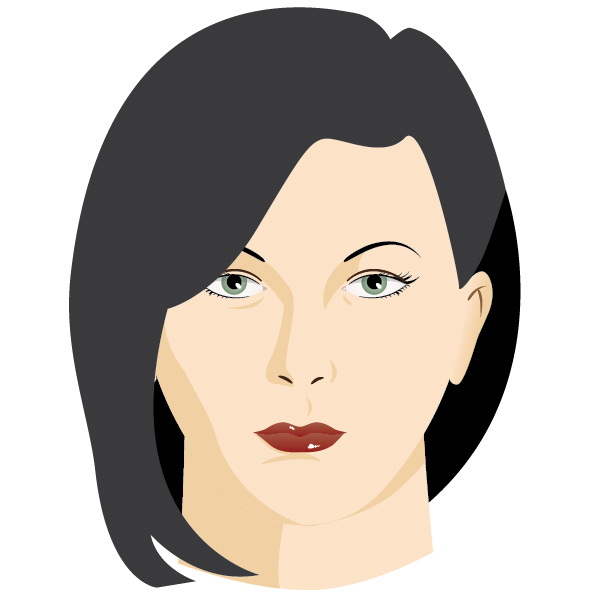 Use the Pen Tool (P) to create a shadow for the hair. In the Transparency palette change the blending mode to Darken.

Let's turn to the "hair" layer. Use the Pen Tool (P) and create the strands of hair. 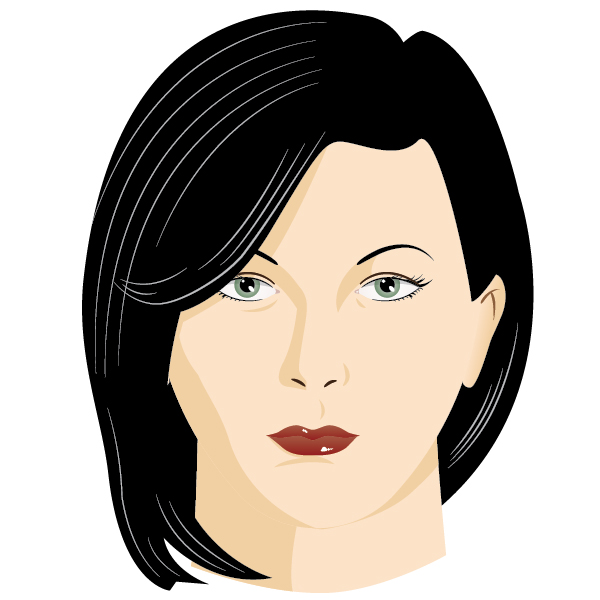 Some designers have difficulty creating a portrait, as you can see there is nothing overly complicated in the process used here. I hope you get pleasure from this lesson. Dear friends, write a comment if you are interested in the continuation of this theme, as we could cover more portrait types and creating human figures in future tutorials. Good Luck!