In this tutorial, we look at two ways to quickly create vector noise patterns, similar to Photoshop's Gradient Noise, but this time fully controllable, resizable, and editable, as it will be a vector graphic. For color control we'll look at the Live Color feature, available in Illustrator CS3.

Recently, I needed to create an alternative to Photoshop's Gradient Noise, but this time in Illustrator. I will explain two ways how to achieve a similar effect. We're going to make a blog header graphic for this tutorial, based on a scalable and easy to edit colored noise pattern.

Important note: Since both methods create overlapping geometry, raw results are not suitable for sign making and vinyl cutting. If you use this method for sign making, then all overlapping elements should be merged together before sending to vinyl cutters and plotters.

Here is the final image we'll be creating. First, let's review some methods for creating random vector noise patterns though.

This method is based on dashed strokes and gives you more control over appearance, since randomness (casualness) is set by you. Basically, it's also applicable to any other vector software that supports custom dashes (like CorelDraw).

To modify pattern dimensions, we need to convert the strokes to solid editable stripes (Users of Adobe Illustrator CS2 and older, use Flatten Transparency command to expand strokes into solid objects, see the first image below). To do this go to Object > Expand, check Fill and Stroke, and hit OK.

Open the Transform Palette, set the Reference Point to middle-top, uncheck Constrain Width and Height Proportions, and set the Height to 200px. Repeat these steps for each set of stripes. Use the Vertical Align Top in the Align Palette (Shift + F7)

To recolor the final pattern, you can either manually select stripes and fill them with different colors or use very useful new feature Live Color. We're going to use the feature later, when adjusting colors for banner graphics. Before you start to play with re-coloring, make sure you select all the object you want to recolor (no need to group it) and create a default color state by clicking the New Color Group icon. This will allow you to reset all changes and revert to the original artwork color scheme.

Changing colors are really simple. You can edit single shades by double-clicking the Color Bar and set its values or using the Color Wheel. All changes are immediately visible on you original artwork. Save your resulting file as "random_noise_pattern."

Another way to create a vector noise pattern is using several standard commands, including Blend and Transform Each. Method 2 is allowing us to use not only lines as reference objects, but also circles, rectangles and more complex shapes (stars, custom symbols, etc.) We also do not need to expand the appearance of the noise pattern, so it's possible to change and adjust some parameters later.

In the same "random_noise_pattern" file, create a 1 pt stroked vertical line that is 200px long. Duplicate it and move it 500px to the right. Select both lines, then go to Object > Blend, and set the Spacing to Specified Steps with a value of 50. Go to Object > Blend > Make (Command + Alt + B). Now, go to Object > Expand, leave Object checked, and uncheck the Fill and Stroke boxes. This will release the single object into separated lines. They're still grouped together, so Ungroup (Command + Shift + G) them, but leave all the objects selected.

Let's have some fun! Go to Object > Transform > Transform Each. Watch the bottom-right corner of the dialog and check Random and Preview. Set the Horizontal Move to something like 15 pixels (you can also enter negative values). Illustrator will randomly move lines to right direction. Since we're working with random numbers, the result will be always different. Check and Uncheck and Random to move lines in different positions. Be sure to Save your work.

We'll set more differences to the groups. But first, select all groups and align them using Vertical Align Center.

Now, select every single group and set a different value for line stroke weight and color for each group. You can move the positions of each group just to add more randomness and diversity. Play with stroke weights to fill up white gaps.

You can always change and customize the line positions, colors, and strokes for each group. If you want to resize the pattern proportionally, remember to activate Scale Stroke & Effects in the Transform palette.

The final result of Method 2 is shown below. Be sure to save it.

Ok, we're done with the basics, let's use our knowledge and make a fun and fresh banner. We're going to use the previously created patterns but also make a new one.

Open a new 800 pixel by 350 pixel document and save it as "banner." Make a new layer, name it "Background." Draw a rectangle 800px wide and 350px tall. Fill it with a gradient, set its type to radial and set the colors to a range from white to blue. Drag the gradient direction from the bottom-right to top-left corner. Now, you can lock this layer.

Make a new layer and name it "Pattern 1." Switch to the document "random_noise_pattern," select the pattern created with Method 2, group it, and copy paste it onto the "Pattern 1" layer in the "banner" document. Make sure you have Scale and Strokes selected in Transform palette, then resize the pattern to fill up the whole artwork area. Use the Flip Horizontal command from the Transform palette. With the pattern still selected, set the transparency mode to Screen and Opacity to 50%, then Lock the layer. 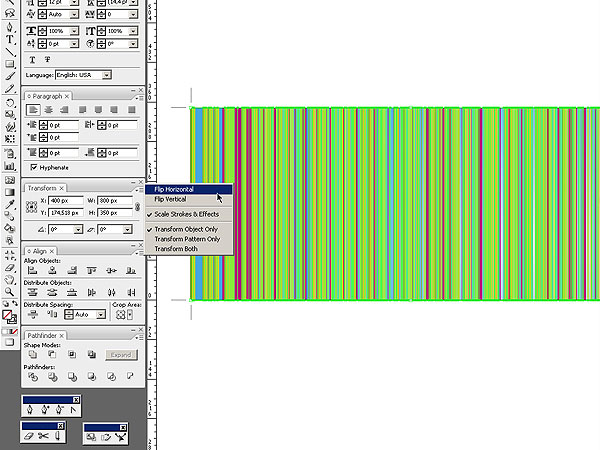 Make a new layer and name it "Pattern 2." Switch to the document "random_noise_pattern," select the pattern created with "Method 1," group it, and copy paste it onto the "Pattern 2" layer in "banner" document. Set the height of the pattern to 150px. Go to Layer palette, and click that small arrow to expand view with sub layers.

Select and horizontally move single groups at will. Arrange individual sub layers. You can also enter each group and delete some stripes, just to add diversity. Align the pattern to the bottom-left corner of the artboard. Duplicate the "Pattern 1" layer and align its content to the right document edge. In this case, I also horizontally flipped the content of the "Pattern 2 Copy" layer. Lock both layers and Save. 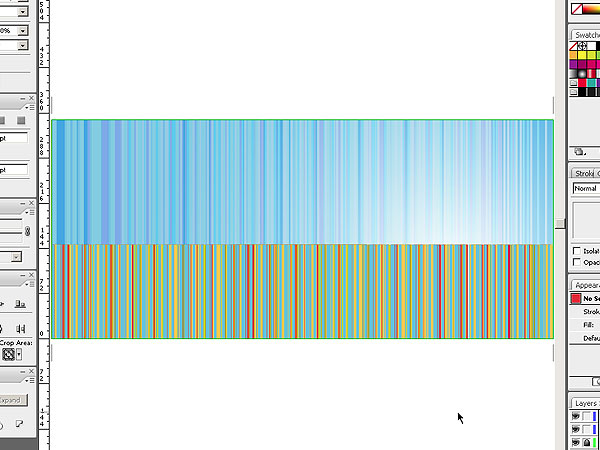 Let's draw some natural elements. Create a new layer, name it "Hills 1." Turn off all pattern layers, so they do not distract us when drawing the new graphics. This step is all about individual feelings and needs. For example, using the Pen tool I drew a set of hills and added gradient mesh to it, as shown below. 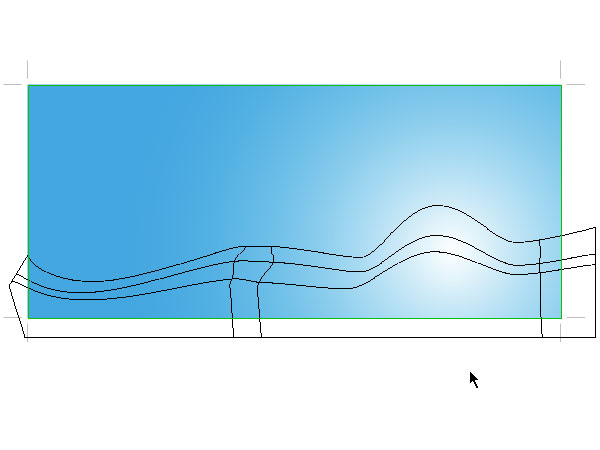 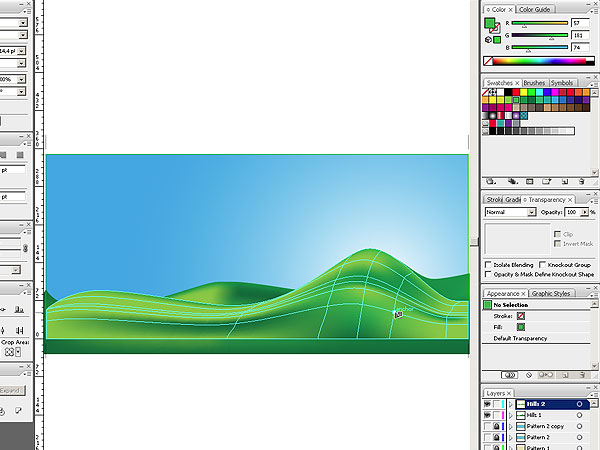 Let's build a radio tower. Create a new layer and name it "Radio Tower." It's a simple object, made with the Pen tool, and 3D rotated rectangles. For perspective distortion I used the 3D Rotate tool. Since it's all about stylization, you don't need to follow exact perspective and 3D rules though.

Colored strokes give the object the depth. Adjust anchor points to optically join lines together, as shown in the second image below.

Let's create the transmission waves. This is a nice example of how flexible Method 2 is. We're going to create a circle noise pattern and recolor it using the Live Color feature.

So, set a new layer, name it "Transmission Waves" and arrange it behind the "Radio Tower" layer. Place a 120 px circle somewhere outside the artboard. Set the stroke weight to 1 px and color to black. Duplicate it and set the size to 20 px. Center the small circle with the bigger one.

Now, go to Object > Expand, leave the Object checked, and uncheck Fill and Stroke. This will release single objects into separated lines. They're still grouped together, so use the Ungroup command, but leave all objects selected. 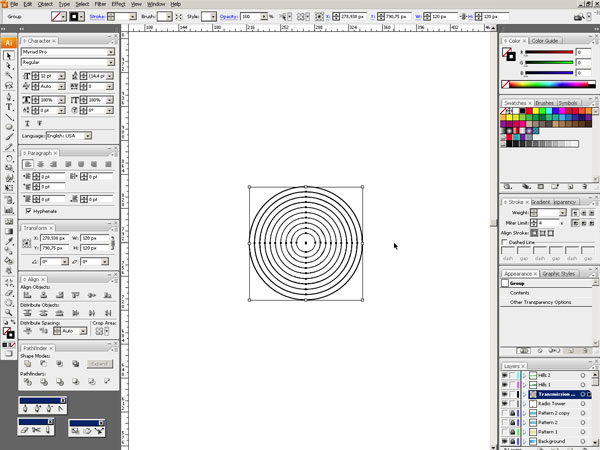 Go to Object > Transform > Transform Each. IN the bottom-right corner of the dialog check both Random and Preview. Set the Scale of Horizontal and Vertical to 90%. Illustrator will randomly downscale circles. Since we're working with random numbers, the result will always be different. Check and uncheck Random to scale the circles.

Set a different stroke weight and color for each group of circles (I used 0.5pt for green, 0.75 for red, and 1pt for yellow). Center all the circle groups.

Position them to the tower top.

Let's change the waves colors using Live Color. Select all the objects on the "Transmission Waves" layer and click the Recolor Artwork icon in the Options bar at the top of the screen.

First, save the initial state by clicking on the New Color Group icon. This will save the original colors, so it's pretty easy to play with various color combinations without needing to cancel the dialog if you don't like the changes you make. 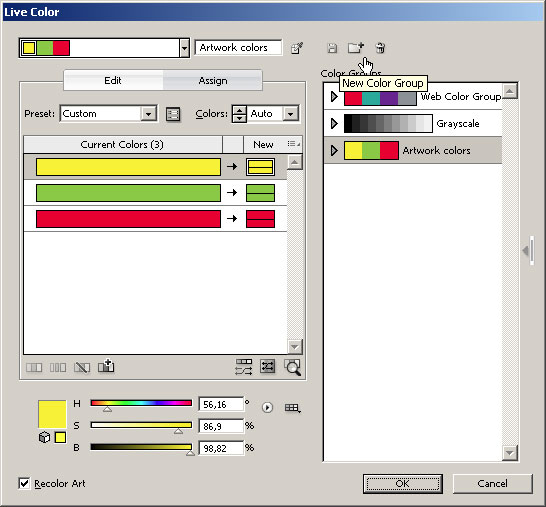 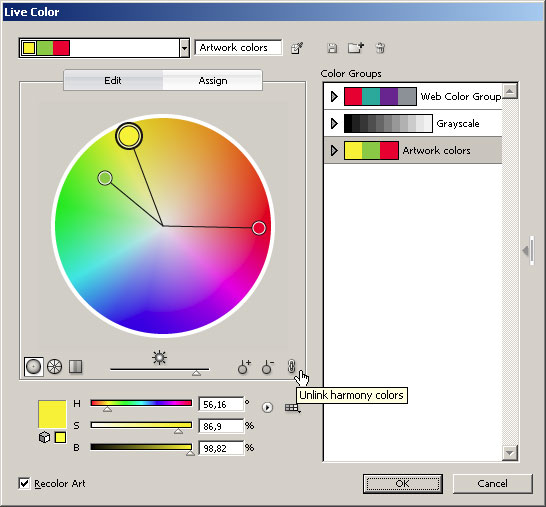 Click on any of the circles within the Color wheel and drag it to the desired tints. If you need to change only one color within the wheel, click on Unlink harmony colors and adjust the tints and shades independently. When you're satisfied with the result, click New Color Group to save the new state. Illustrator will remember the original and new states so later it's easy to revert to original colors if need be.

Let's make the noisy sun next. Actually, it's a duplicate of the "Transmission" layer, named to "Sun," arranged behind the Transmission layer. Circles are resized and modified by Transform Each. In this case, I also adjusted the strokes weight and used Live Color to change circle colors. 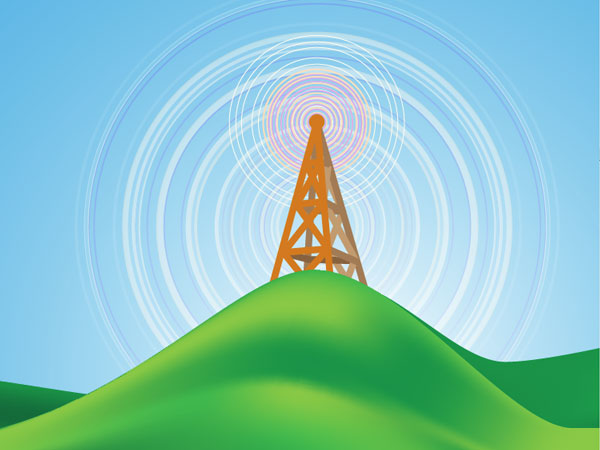 Make a new layer named "Gold Wheat" To make gold wheat, I used the Method 2 technique with these exceptions:

So, the basic group was then duplicated many times just to fill the horizontal space of the banner design. 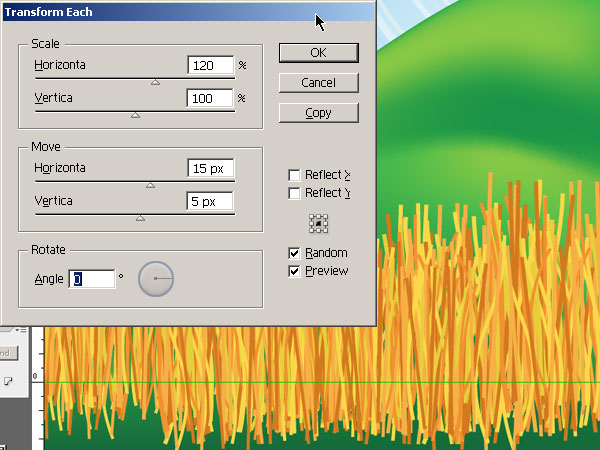 Flowers were created on a new layer named "Flowers." They're made out of the simple stroked curves and circles. Copies of circle noise pattern were used to give the composition more live. 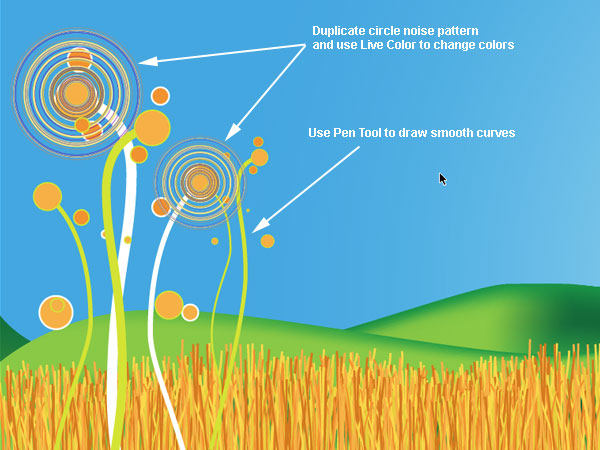 Typography is placed on a new layer behind the "Flowers" layer and is based on a free font called Romeral.

The title is filled with basic orange and stroked with white. To add white shadow I used a Drop Shadow effect. Go to Effect > Stylize > Drop Shadow. In the Options dialog, set Mode to Normal, Opacity to 100%, and Blur to 0%. This allows you to change text quickly and effectively, instead of duplicating text, offsetting, and filling it with a different color, which would lead to editing two texts. The tagline text is Myriad Pro Semibold. 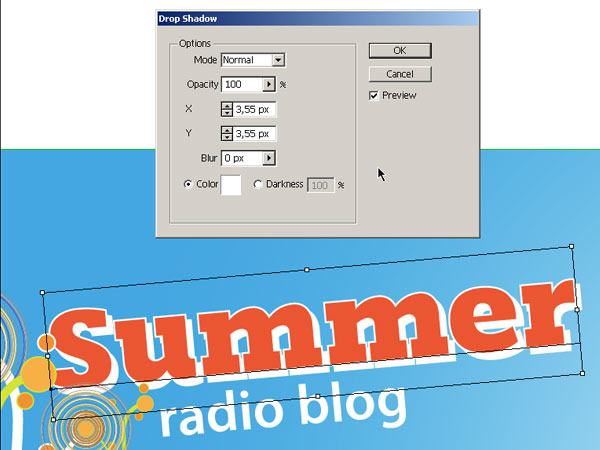 Finally, mask all overreaching layers with a rectangle, so the artboard is nice and tidy.

In this tutorial, we learned different ways to get interesting stripe results with simple tools and commands. We created interesting random vector scalable patterns and we took a look at some new features in Adobe Illustrator CS3, such as Live Color. I look forward to seeing your experiments with these interesting vector noise techniques.

Peter Akuratny
I'm a product designer, living on the graphic design and chocolate. I worked as an art-director for a full-service advertising agency, tasted American design bread, and now I'm leading my own design studio. I'm enjoying as much freedom as my clients give it to me :)
Weekly email summary
Subscribe below and we’ll send you a weekly email summary of all new Design & Illustration tutorials. Never miss out on learning about the next big thing.
Advertisement
Download Attachment
Translations