Recently, Apple released a new iTunes video advertisement featuring the band Coldplay and the song, "Viva la Vida." As is usual with Apple ads, this commercial is very beautiful. The coolest thing is that this time they chose to use light effects with glows and sparks. As I'm a really big fan of this style, I thought it would be nice to have a tutorial showing how to create that effect.

In this tutorial, I will show you how to create a very similar effect to that used in the Apple Coldplay Video Ad. If you have done the Sparkling Hot Girl tutorial in Photoshop, you will find it similar in some steps of this tutorial. You can download the image needed for this tutorial here. 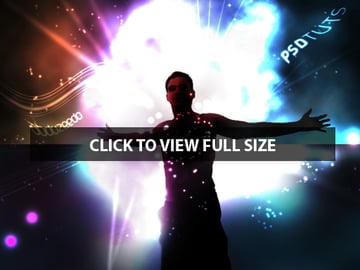 Create a new document and fill it with a Radial Gradient. Use a dark gray(#161616) and White. The white will be the main light. 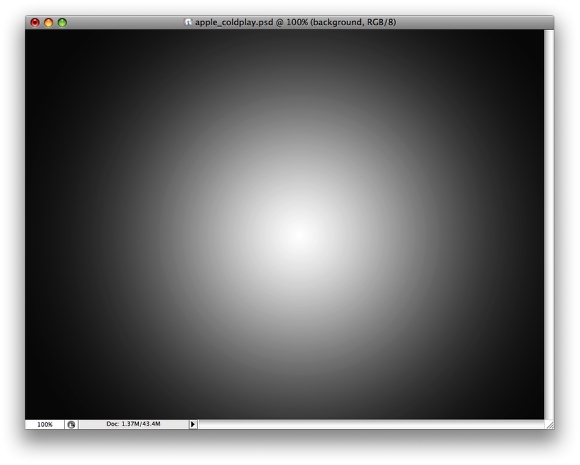 With the Rectangle Tool (U), create a rectangle with half of the height of the screen. It will serve as the floor. Use a very dark red (#180a06). 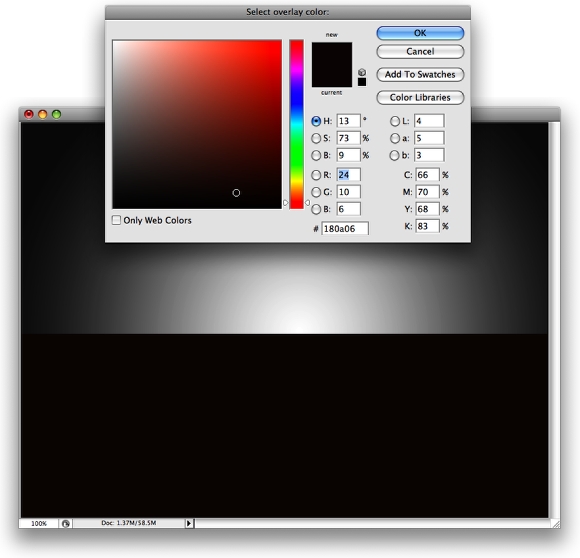 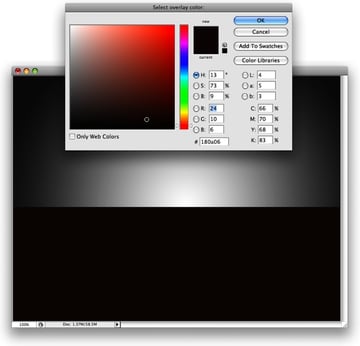 Add a new layer and create a marquee selection from the floor layer. You can do that by right-clicking over the layer's thumbnail. Then choose Select Pixels. After that, select a blue (#113e4b) for the foreground color and black for the background. Then go to Filter>Render>Clouds. 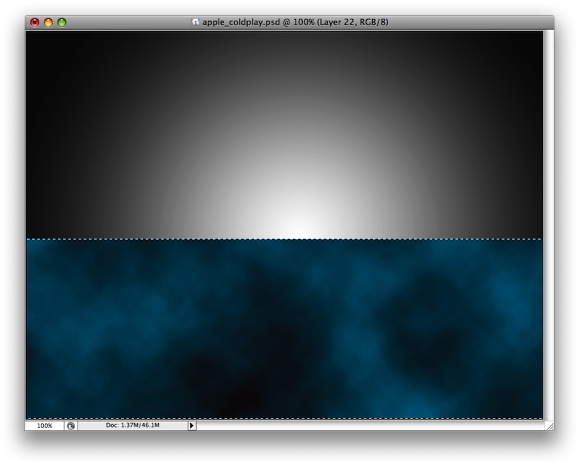 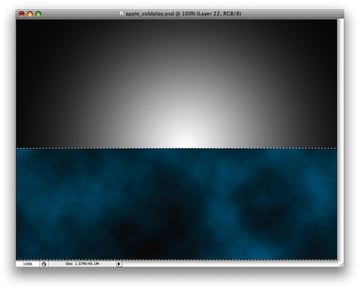 Go to Edit>Transform>Distort. Use this command to apply perspective to the clouds. Just move the vertices, as in the image below.

Next add a bit of blur by going to Filter>Blur>Gaussian Blur. Use 8 pixels for the Radius. You can even change the Opacity to 70%. If you want to make it darker, use the Eraser Tool (E) and set the tools brush size to a 0 Hardness. Then erase some parts of the layer.

Now it's necessary to repeat the steps we used to create the floor with the Render Clouds. However, instead of using blue for the color, use a dark pink (#552a58). Tip: If you duplicate the blue layer, it won't work because we need to use different clouds. 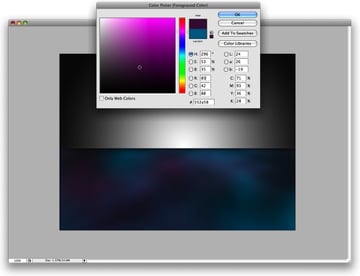 Create a new layer exactly like the previous one, and make it the same height. Then select black and white for the colors. With the Gradient Tool (G), fill the layer with a Radial Gradient. The white has to be in the center. Then change the blend mode to Color Dodge. 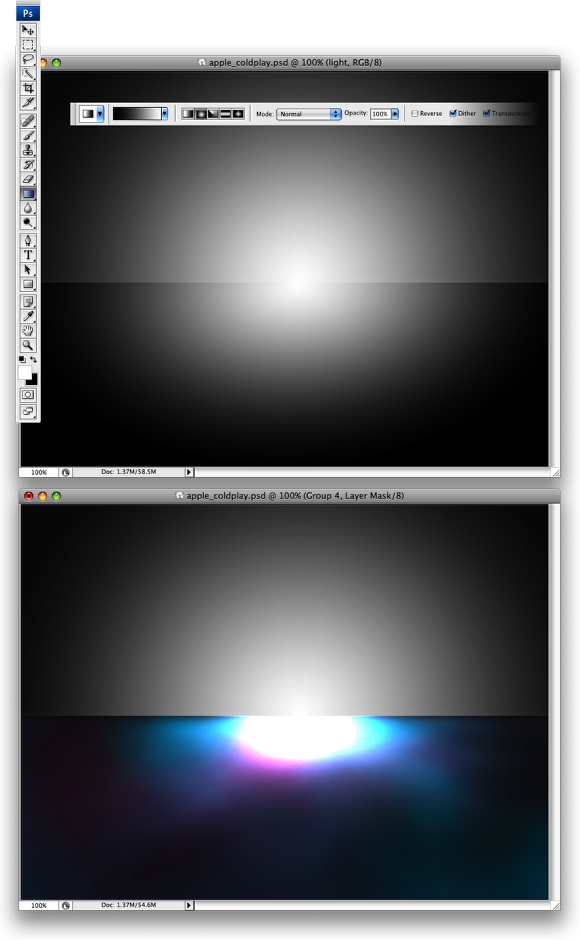 Now we create a new layer. Then select the Lasso Tool (L). Next let's change the Feather to 20px. Then create a selection, as shown below. Keep in mind that this element will be the light as well. After that, select black and white for the background and foreground colors. Then go to Filter>Render>Clouds.

Now let's add more blur. To do that, go to Filter>Blur>Gaussian Blur, and use 35 pixels for the Radius. After that, the most important thing, change the blend mode to Color Dodge. Then delete the part of the cloud that is not exactly on the floor, as I marked in the image below. 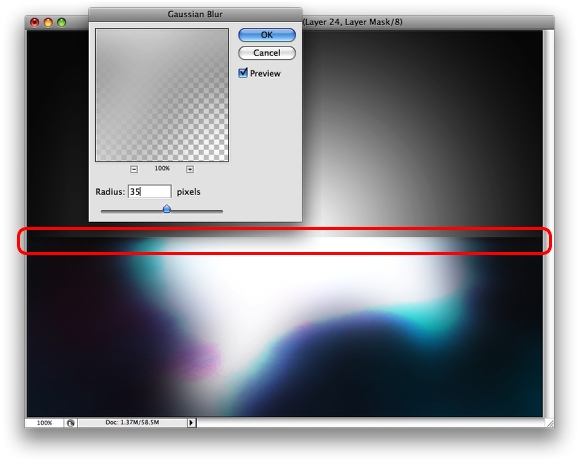 Next we will create the background's light. First create a new layer. Then use black and a 50% gray for the colors. Then go to Filter>Render>Clouds.

Let's add a Layer Style next by going to Layer>Layer Style. First add a Color Overlay with (#84a7b8) for the color. Then change the blend mode to Overlay. After that, select the Gradient Overlay. Change the blend mode again to Overlay and use a gradient with these colors: orange (#fba46f), pink (#cb8cd4), green (#346777). Use Linear for the Style and 180º for the Angle. 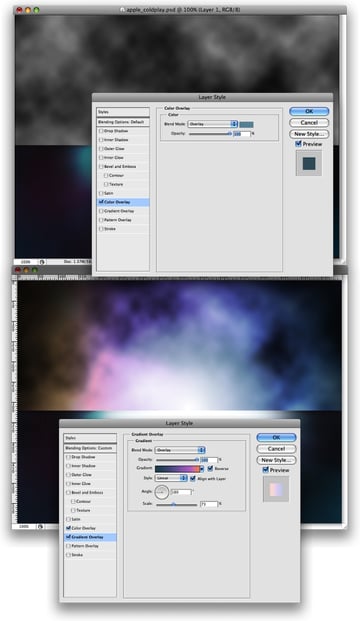 Create a new layer on top of the others. Then with the Lasso Tool (L) and a 20px Feather, create a selection, as shown below. Then using the same black and a 50% gray for the colors, go to Filter>Render>Clouds. Then using the Blur Tool, add a blur to some areas. After that, change the blend mode to Color Dodge. 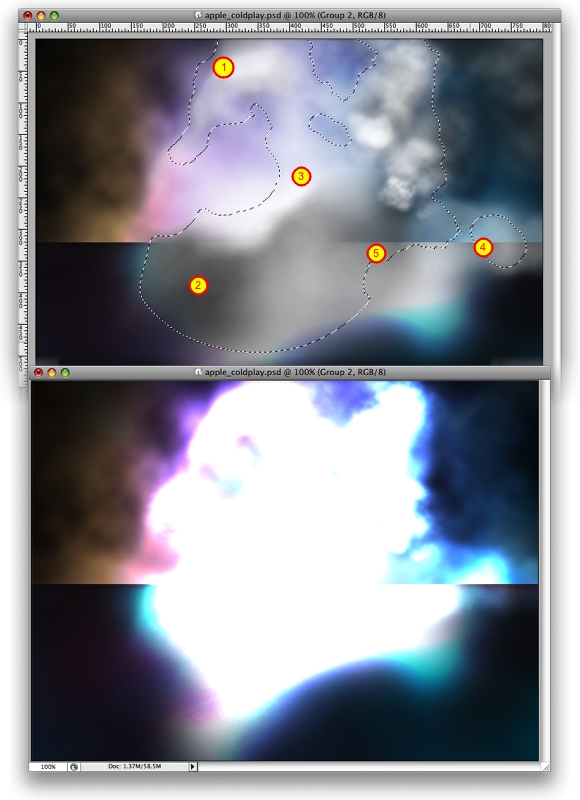 Place a photo on the document. Then cut out the background and leave just the person. Use the tools you feel comfortable with to accomplish this. I used the Pen Tool (P). 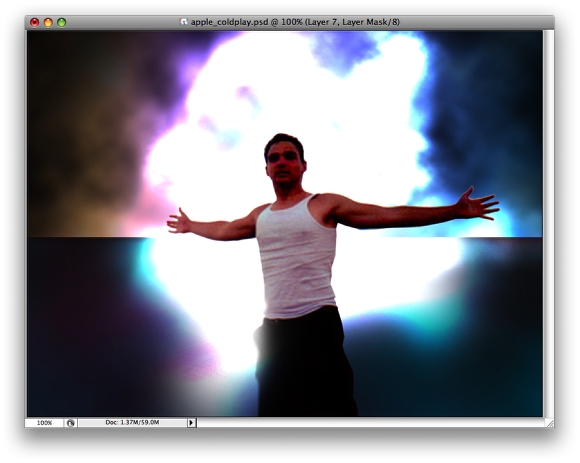 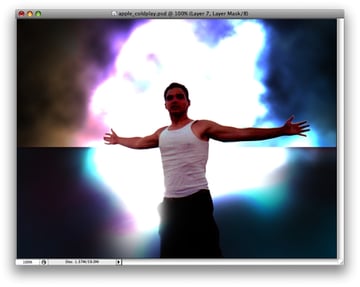 Create a new layer on top of the layer named "dude." Fill it with black. Then go to Layer>Create Clipping Mask. Next select the Eraser Tool (E), and pick a 100px Master Diameter Brush with 0% Hardness. Then erase some parts of the layer, to add some highlights to the guy.

Now let's add some lights in front of the guy. To do that create a new layer. Then choose a regular brush (the circle one), use a big size like 200px, and use a 50% Opacity. Then choose first Orange and Brush where I marked (1) in the image.

After that, choose a pink color. Then paint where the number (2) is marked. Then change the blend mode of this layer to Overlay. You can even add another layer with Clouds. Then with the Erase Tool delete almost everything. Be sure to leave some smoke details in front of him ( 3, 4, and 5). 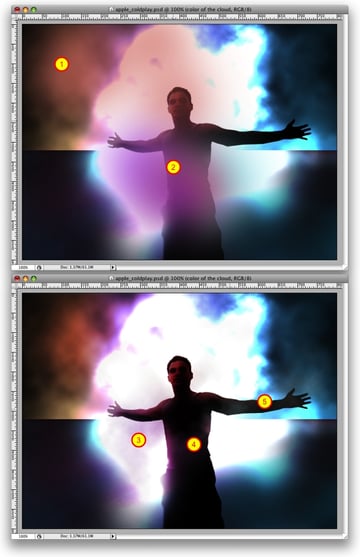 Create a new Folder and rename it to "sparks and rays." Then change its blend mode to Color Dodge. Now the layers we create will be placed inside this folder.

Next we create a new layer and choose the Brush Tool (B). For the color use white and select a regular brush with a Master Diameter of 13px and a Hardness of 0%. Then create three lines, as shown in the image below. Tip: Press once, then hold the Shift key and press where you want the end-point of the line. That will create a straight line. 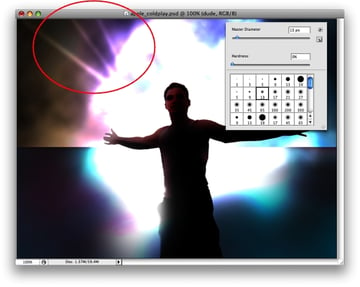 You can create another layer or use the same layer, but I recommend you create a layer for each group of effects based on brush diameters sizes. So now use a smaller diameter, like 4px. Then create a few more rays of light, as in the image below.

Create more rays of light using different brush diameters and opacities. Again, I recommend you create a new layer based on each new brush size used. This will keep the file organized.

It's fairly simple to create some curved rays. First, add a new layer. Then create some lines. Be sure to use different Brush Sizes, as I did. Then go to Filter>Distort>Wave. Use 1 for the Number of Generators. Then set the Wavelength to Min 1 and Max 500. Then set the Amplitude to Min 5 and Max 200. Lastly, change the layer's Opacity to 50%.

Next let's make the Sparks in the image. First, create a new layer. Then select the Brush Tool (B). Then go to Window>Brushes to open the Brush Engine. For the Brush Tip Shape use 100% for the Spacing. For the diameter, start with 9px, though note that you can change that to create bigger sparks. Over the Shape Dynamics use a Size Jitter of 100%, Min Diameter of 5%, and Minimum Roundness of 25%. Over the Scattering, use 1000% for the Scatter and mark Both Axes. Then select Other Dynamics and change the Opacity Jitter to 50%.

Now select white for the color and paint some sparks in the image, as shown below. Tip: Use the left and right brackets on your keyboard ([ ])to decrease and increase the Brush Diameter quickly.

Add more sparks to the image. You can place some really big sparks and some smaller sparks in front of the main figure. Many sparks are placed across the figure's chest in the final image below. Although it might look like a complicated effect to create, it's actually quite simple. We use the same technique with the Clouds almost every time. Actually, that's the technique to create all sort of lighting effects.

Fabio Sasso
I am a Brazilian designer living in Porto Alegre (south of Brazil). In 2003, I founded a web design studio called ZEE, with Fabiano Meneghetti, an architect and friend of mine. It's a small studio now, with 4 people working basically with web.
Weekly email summary