Fitting for these tough financial times, learn step by step how to create this turbulent vector illustrations. Numerous Illustrator tools are used to create this illustration. We'll use Symbols to add texture to the land are, the Mesh Tool for the sky, 3D effect to compose the skyscrapers, the Twirl Tool for the tornado, and Warp effect for the dollars. We'll cover alot of ground in this tutorial, faster than a businessman escaping to the bahamans! 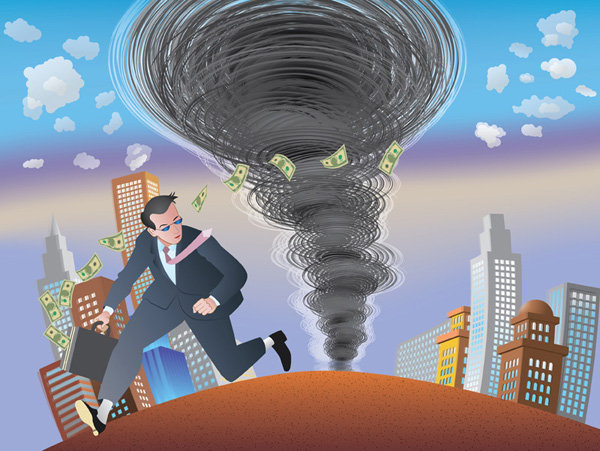 First let's create a new "Land" layer. Create a new shape of the Earth, and fill it with the linear gradient.

Now we'll create the soil texture on the land layer. Select Artistic Textures > Stipple from the Symbols library and pour it over the soil surface. Then apply Object > Expand. Apply a linear gradient to the soil shapes. 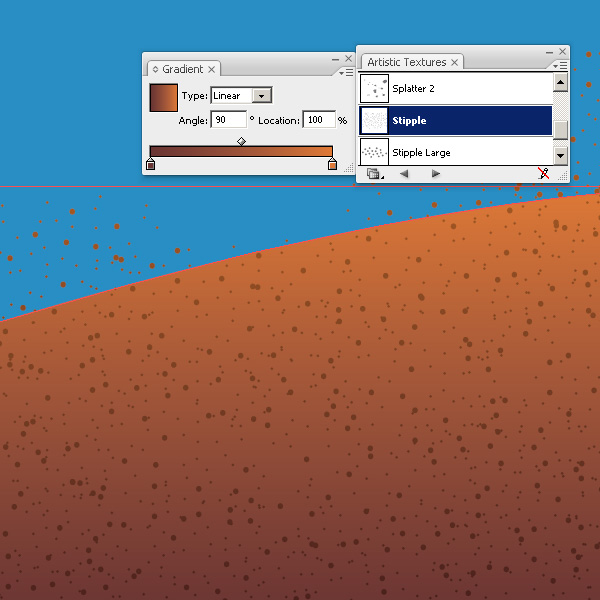 Copy the form of the surface of the soil and set it above the texture. Select the upper figure and texture, use Crop from the palette Pathfinder, cutting the texture out of the outlining figure as shown. 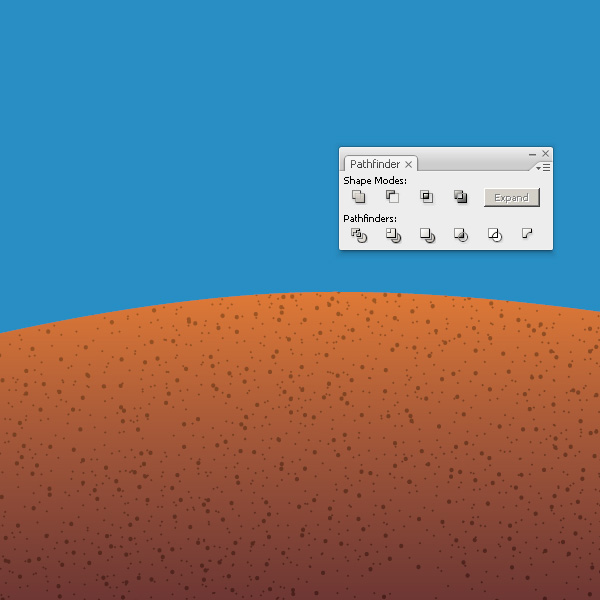 Now we'll design and color the background sky. Use the Mesh Tool to create a mesh and then color a sector as shown below.

Let's create the clouds next. First make new "cloud" layer, which goes above the "BG" layer. On this new layer, create ellipses, setting them one above another in order to compose a cloud. Now Select All, Add to Shape Area, and click Expand in the Pathfinder palette. 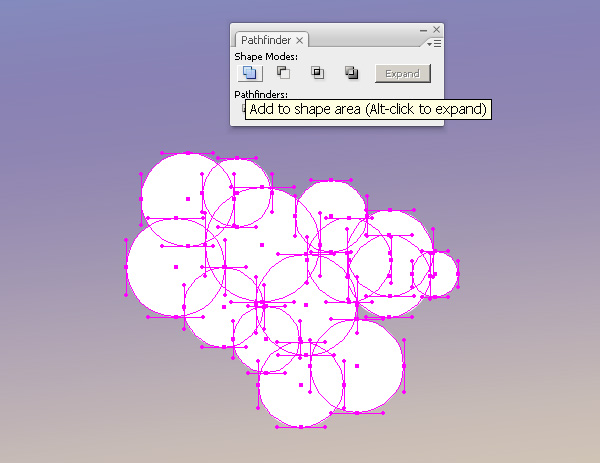 Place these clouds over the gradient sky, change the transparency so some look a bit off in the distance. Place them one above another as your imagination sees fit. We won't fill in the center because the whirlwind will be set there. 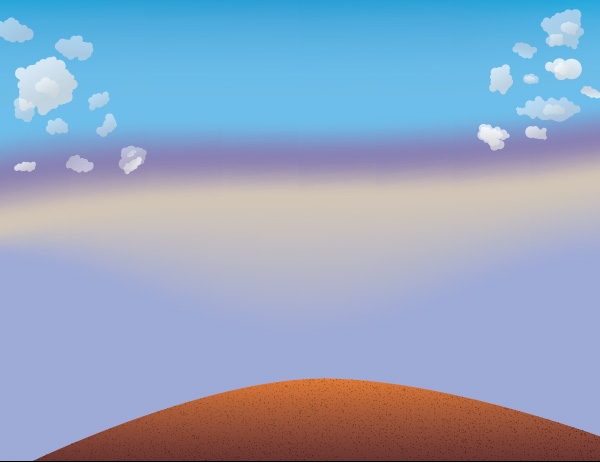 Now let's design the skyscrapers. First create, a new "Skyscraper" layer, set above the "cloud" layer. Create a rectangle 50px by 200px, then apply Effect > 3D > Extrude & Bevel, and the settings are shown below. 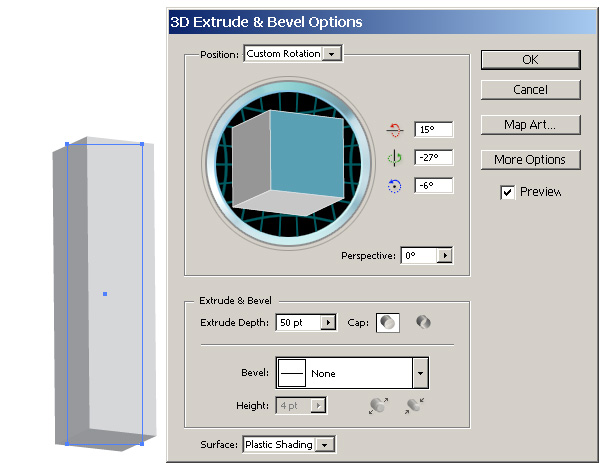 Make a few more rectangles in the same way and set one above the other.

Let's make the windows of the front of a house. Create the square 5px by 5px, duplicating it we create a row of windows. Select and group the windows. Use Effect > 3D > Rotate.

The same action will be done with the windows of the second façade of a skyscraper. The picture of facades on the edges of a shape can be set in another way. Create a façade with the same size as the edge of the 3D shape your working with, move a façade into the Symbols palette, select a 3D shape and then click 3D Extrude & Bevel in the Appearance palette. Then select Map Art in the open dialogue window, find the needed side and add the symbol.

Select all the objects of a skyscraper and go to Object > Expand > Appearance. Now we'll create the effect of a sagging skyscraper under the wind of a tornado. Group all the elements of a skyscraper, and apply Effect > Warp > Arc, with the parameters shown in the picture below. 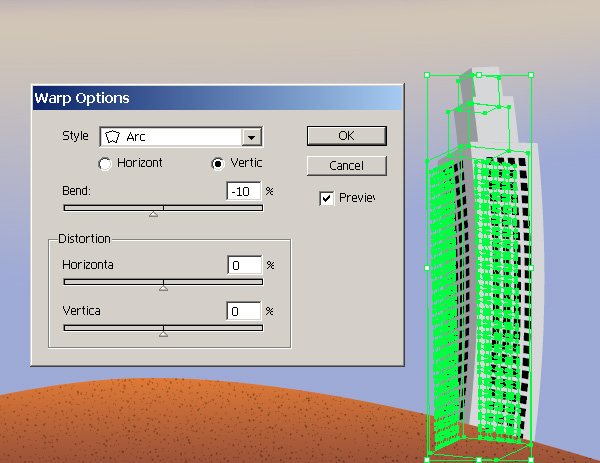 Now move a skyscraper clockwise a bit. Ungroup the objects of a skyscraper and fill the windows with a linear gradient.

Create and place the skyscrapers so that the street area is formed. 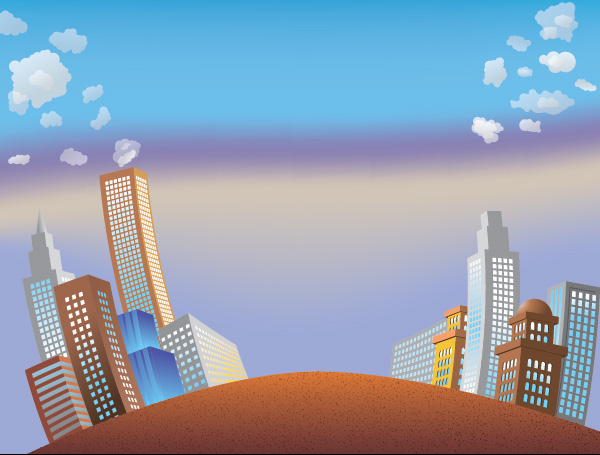 Now the effect of a house trembling will be created. Duplicate the house and move it around its bearing point of the foundation a bit and then change the Opacity to 25%. 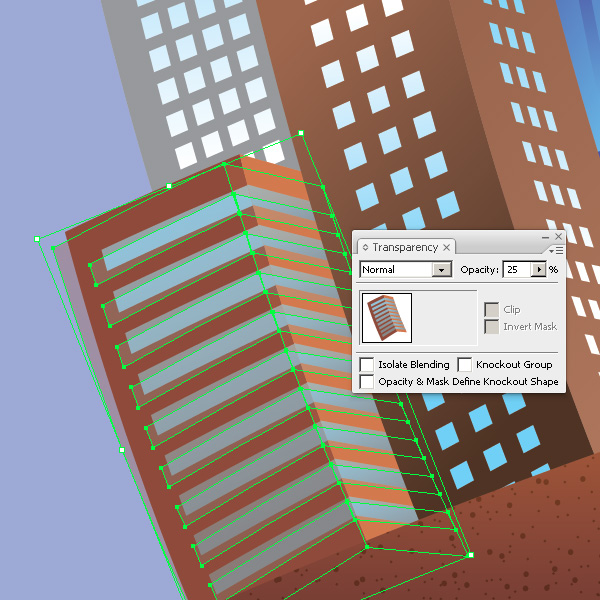 Now we'll create a tornado. First, make a new "tornado" layer and set it under the "land" layer. Create a five pointed star in the upper are of the illustration. Now pour over it with a radial gradient. Now turn the star into a twister with the Twirl Tool.

Duplicate it, turn it, change the scale, transparency, direction and colors to create the tornado.

Create luminescence around the tornado by putting two copies of it in the background, in the Transparency palette change the Blending Mode to Overlay, and Opacity to 60%. 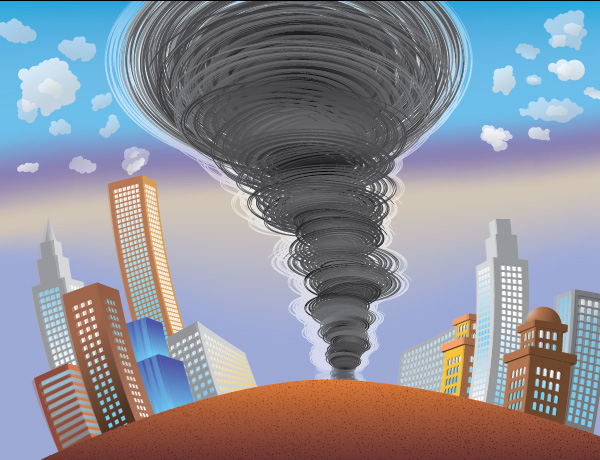 Now we'll create a running man. Draw a wire frame. The direction of movement is from right to the left and is composed so the spectator sees it as an escape.

Now work out the details of the sketch. You may need to do some research of men in business suits to get this drawing just right. 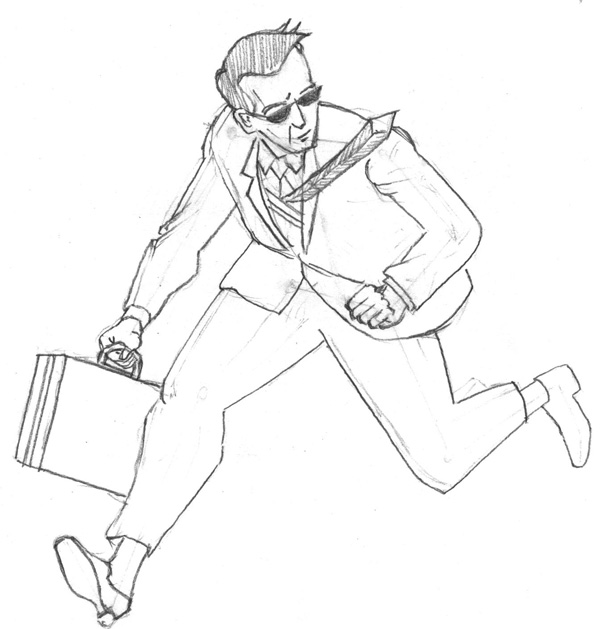 Create a new "man" layer above the "land" layer. Go over the sketch using the Pen Tool (P). After drawing the head shapes, add details with a brush, then fill with a linear gradient. 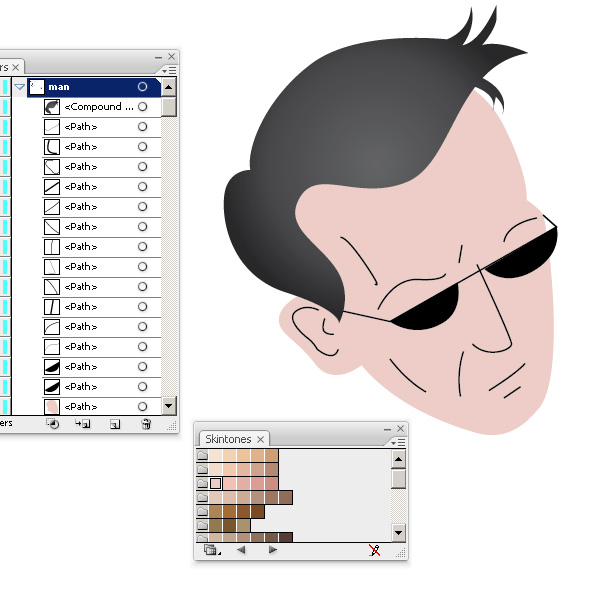 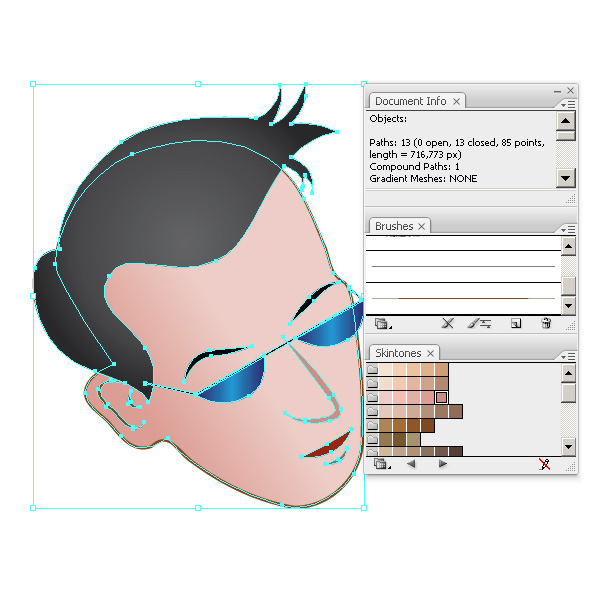 Continue creating the shapes that compose the drawing using the Pen Tool.

Color the elements with the working colors and set them in the right order in sub layers.

And now we will work with colors and shadows. Work with a linear gradient. The right hand of a man is drawn separately and a radial gradient is added there. 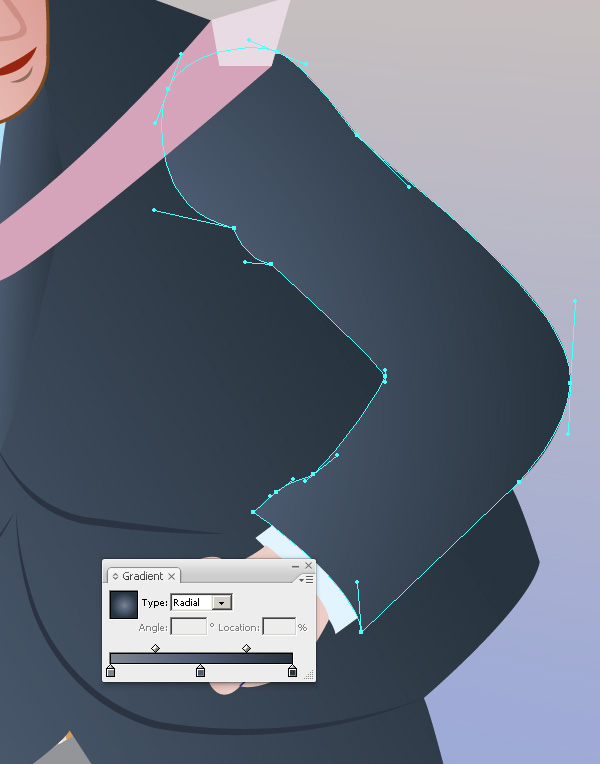 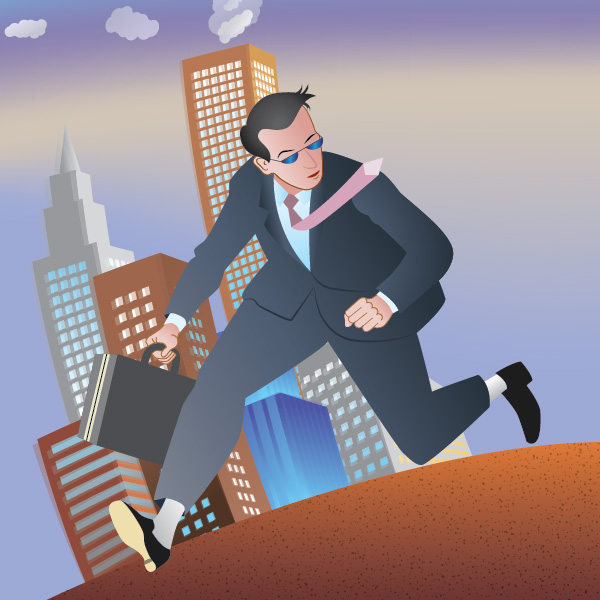 Now let's design simple dollar images. First create a new "dollars" layer above all the \ other layers. A banknote is created with simple shapes and the use of the Pen Tool (P). 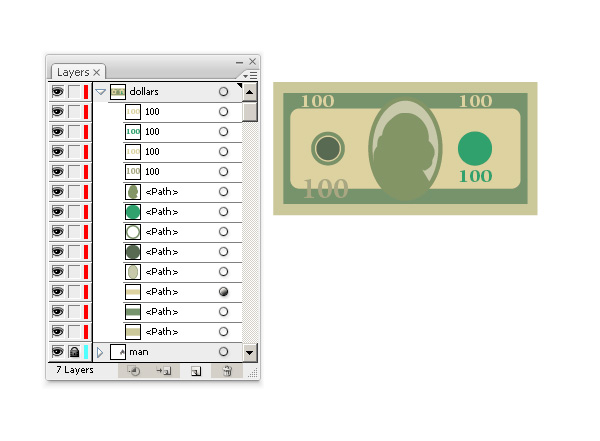 Group all the elements of a banknote. We will work with its duplicates. Reduce the duplicate of an example to the needed sizes and create a banknote which will fly from the case. Select guide and banknote, then use Divide from the Pathfinder; group and set sub layers in the right order and delete unnecessary parts of the dollars. 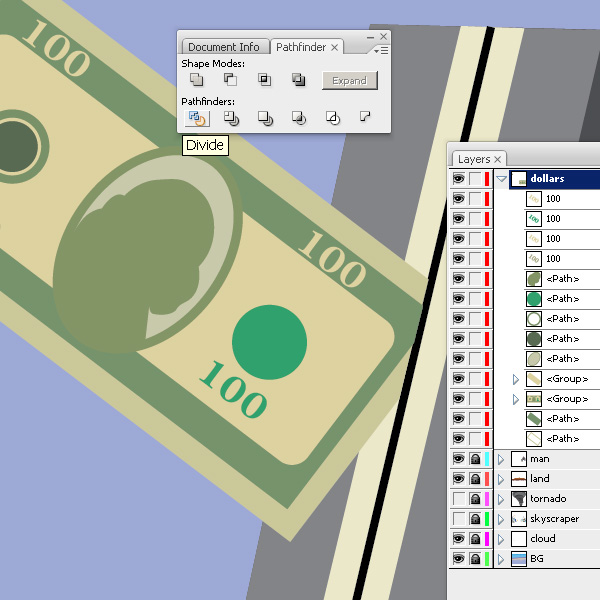 By duplicating and changing the scale we create flying banknotes.

Change the shapes of banknotes by applying Effect > Warp > Arch. Feel free to experiment with other shapes as well. 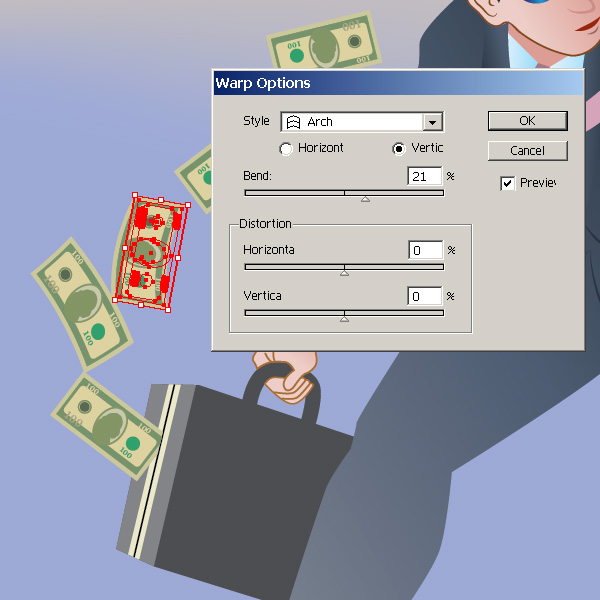 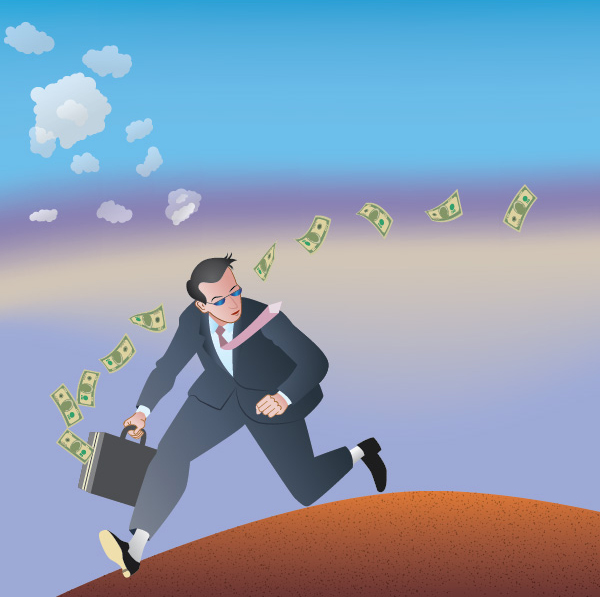 This tutorial moved at a quick pace and covered alot of ground. It gives you an overall look at how to compose this piece, with tips and techniques shown for each area of this design. Have fun creating your own city landscapes built on interesting themes from your imagination. Good luck!