Hey Vectortuts+ faithful! Welcome back for part two of my tutorial series on the advantages of using the Variable Width Stroke Tool. If you haven't read the first tutorial, I suggest you go back and read: Illustrator CS5 Variable Width Stroke Tool: Perfect for Making Tribal Designs!, which covers how to use the tool, and then shows how to create tribal designs with it. You'll need to know those basics before proceeding with this part two of the series, where we use it to create gestural sketches and digital inking.

One incredibly useful function of the Variable Width Stroke Tool is giving character to your lines. By varying the width of the line you add flair, movement, strength, personality and lots of other adjectives that don't visually describe a line. Basically, you take something flat and boring and give it life! Let's just take a look at a few examples of how the Variable Width Stroke Tool adds a gestural character to an otherwise boring line: 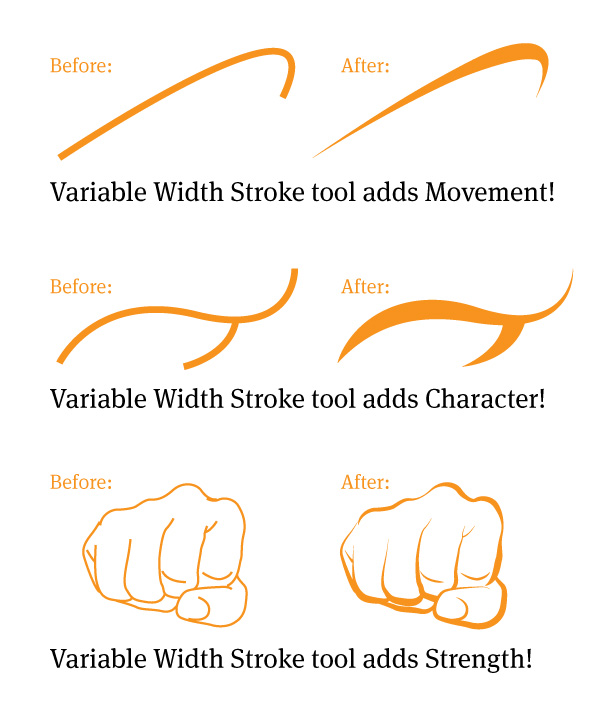 OK, now that I've convinced you how great the tool is, let's look at a real-world example of how I put this tool to use. I recently had a client (let's call her Brenda – the name has been changed to protect the innocent) that needed a logo for her blog; "Living Brenda." The project description I got had a kind of Martha Stewart vibe. Her blog was natural, organic advice on how to live life. The client described the logo as a woman's head with a variety of objects springing out of it – like recipes, love and advice on healthy living.

I knew immediately that I could draw a woman's head with stuff exploding out of it – that's no problem, but I also knew that the style of the drawing was critical. It needed to feel loose and gestural. The Variable Width Stroke Tool was the perfect way to achieve the look I was after. OK, so let's take a look at how I created this logo.

The whole thing starts with my pencil sketch. Now unfortunately, I can't give an entire lesson on drawing here, but I'll show you the steps I took to create this pencil sketch.

Whenever I draw a head it always starts as an oval. Then I try to imagine the oval in 3D – like an egg. On that oval (egg) I sketch a vertical and horizontal line. You should be able to imagine how those lines are wrapping around the shape of the object.

The vertical line will be used as a center line – as if you drew a line down the center of your face. So, naturally, the nose would land right on top of this center line. The horizontal line represents where the eyes will go. Even in this rudimentary state I can already see the face. The more you practice this, the easier you'll see it. 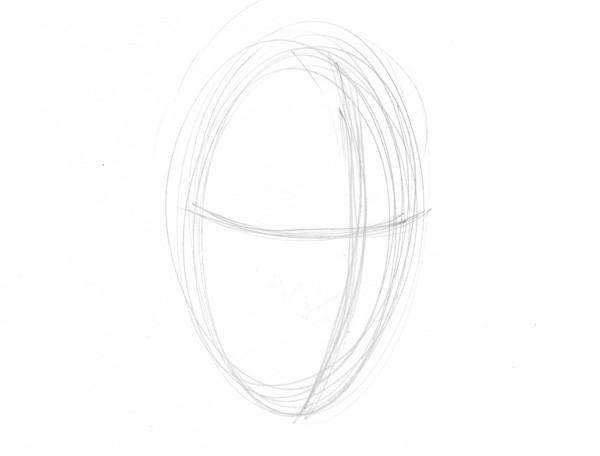 The obvious next step is to draw on the eyes and nose. It's important to stay mentally in that 3D space. I also roughed in where the top of her head would be popping off. I don't know if I'll show this so clearly in the final logo, but it's a good reference to have. 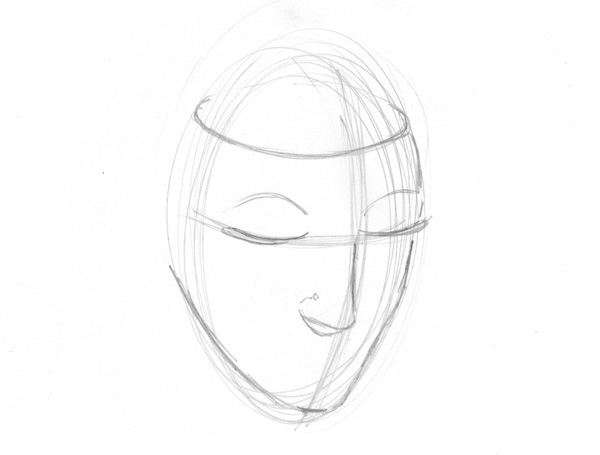 Next, I roughed in where I saw the hair wrapping around her head. I thought Brenda's hair style would work for a loose gestural style mark. Her hair had a loose flowing quality about it. 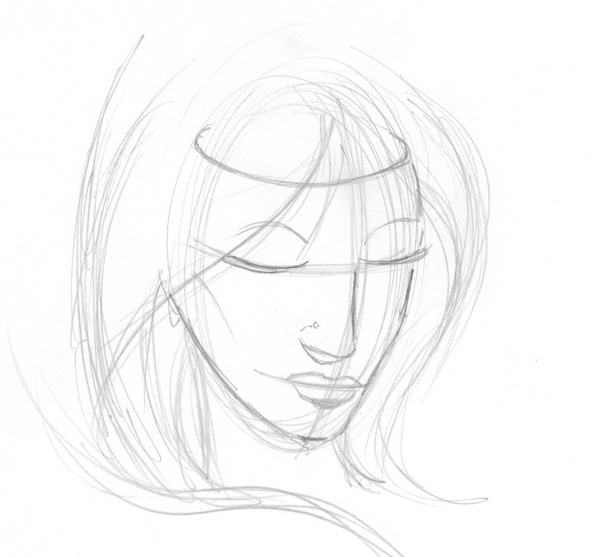 Finally, I've added a few objects to represent the things that Brenda will we writing about on her blog. The client gave us a list to work off of. And there you go, that's the sketch I will use to create my gestural logo.

The next step is to scan our pencil sketch into the computer and get it into Illustrator. Now, once in Illustrator I like to set my logo file up by creating three layers. The pencil sketch will go onto the bottom layer. I lock that layer so my art doesn't move and so I don't accidentally grab it while I'm working on the design.

On the second layer I will eventually put my solid blocks of color in. I want to do that last, so for now I'll leave my second layer blank.

The top layer is where I'm going to put my gestural lines. Now, I know I'm going to use my Variable Width Stroke Tool to give these lines their character – so I just need to create a center lines, not shapes. Here are the lines I made in illustrator over my pencil sketch.

Once I have those lines drawn, I grab my Variable Width Stroke Tool and put it to good use. Once again, the basics on this tool are taught in part one of this tutorial series. When you're adding character to your lines, make sure to emphasize the more important lines. For instance, the line that makes up her jaw bone is much thicker. It represents the bottom of her head, so it's thickness gives her head stability. Also, it is located where there would naturally be a shadow, so the thickness of the line helps create that shadow.

Here is a little detail shot for you. What a HUGE difference the Variable Width Stroke Tool makes.

Next we need to drop back down a layer and add in our solid blocks of color. There is nothing special about this step. I just used my normal Pen Tool to draw these shapes. I kept the colors natural and light so they didn't overpower my gestural lines, which I want to pop. You can see how much these basic shapes help define the face and hair. 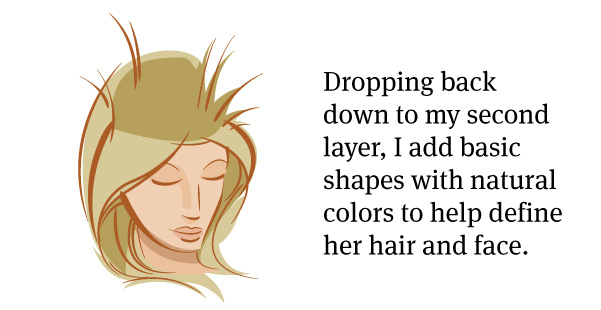 Now I need to add in the various subjects that Brenda is writing about in her blog. In this case, I ignored my pencil sketch a little.

Last but not least, I need to add in the shapes behind each of the subject objects. This was a good opportunity to work in some color. But even with these more colorful items, I kept the saturation of the colors subdued. I wanted this mark to feel a bit more natural.

And as a very last step I've added a logotype to go along with this mark. I made sure to pull colors from the mark for use in the logotype so the whole thing worked together. For a font I've selected Century Gothic. I thought its sharp geometric style was a good foil to the looseness of the mark. I thought these contrasting styles would work together well in a website design.

Now, I know what you're thinking, "But BILL! I'm not an amazing and talented illustrator like yourself. What if I can't draw?" No problem! Making these types of gestural marks are very easy to create using photos instead of drawing. Using photos does limit you a little, but it's a great alternative approach if you don't have drawing skills. Let me run you through this process real quick without any commentary.

Alright, now for our very last part in this tutorial – digital inking. If you are an illustrator, whether that be a comic book style illustrator, cartoony illustrator, tattoo artist or graffiti artist the Variable Width Stroke Tool is a great asset for inking your pencil sketches.

Let me quickly show you how you can use this tool to do your digital inking. Now, once again, this process begins with a pencil drawing. And again, I am unfortunately not going to be able to give you a drawing lesson in this tutorial. That's for another day. So, let's take a look at the pencil sketch I'm going to ink:

This is a drawing I did for fun in my spare time. The concept was a kind of super hero with a samurai motif. Now, this is certainly too large to ink fully in this tutorial, so let me zoom in on his face, and then we can ink a part of that.

There we go, much better. Now the first step in inking is just creating the center lines using our Pen Tool. Now, again, these are going to be our skinny, boring, flat lines. Here is the first set of lines I created: 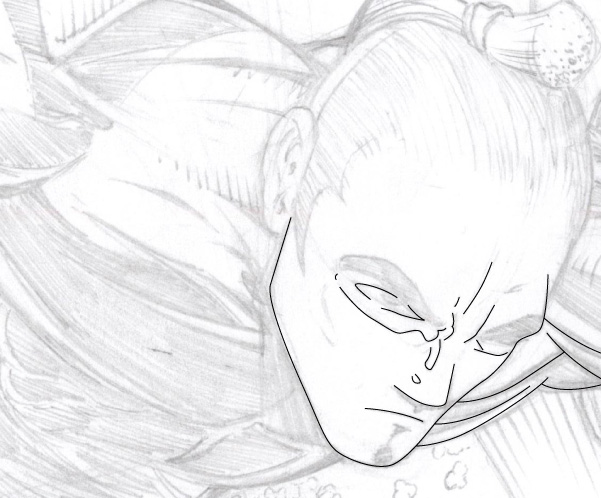 I am going to do this in a bunch of little parts so you can see the progress. Once we've created these simple lines, it's time to add the character (using our Variable Width Stroke Tool of course). 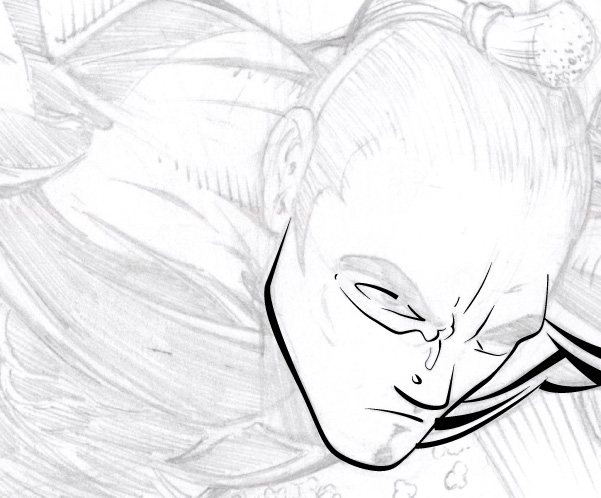 Wow! What a difference. Now, inking like this is a little bit more intensive of a workflow than using a brush or crow quill pen, but the control and crispness you gain is amazing. I don't know if this inking style will take over the comic book industry because it's a bit slower, but for one-off splash pages and design projects it's certainly worth trying.

Now you'll notice that some of the thick ends of the lines end kind of funny. In cases where one line doesn't match up nicely with another line, we need to do a little manual correction. First, we need to select, then Object > Expand Appearance the offending line. This will convert it into a shape. Then we can use the Pathfinder Tool to subtract and add the bits of shape that we need. Here is the next step, I will make my changes and additions in green so you can see what I fixed and what I added. 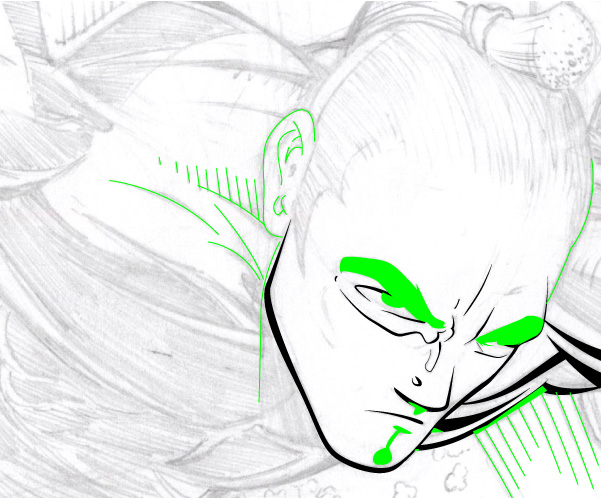 You'll also notice in green I have added a few standard vector shapes (like the eye brows). Hey, I didn't say the Variable Width Stroke Tool would be the ONLY tool you use to digitally ink this pencil sketch. 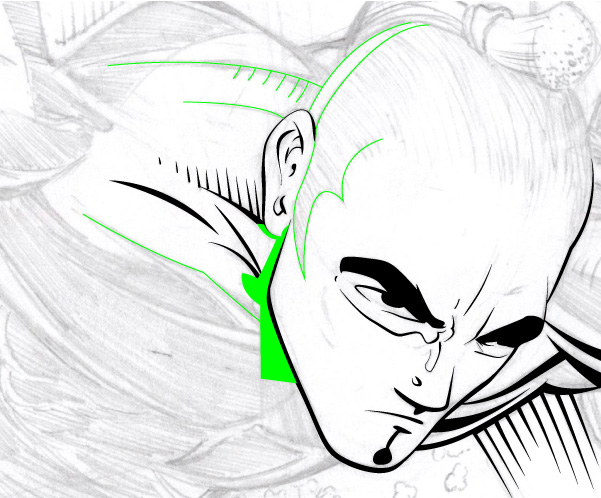 This is more of the same. I've taken my standard lines and given them that beautiful character using the Variable Width Stroke Tool. Then in green I've added some more lines. 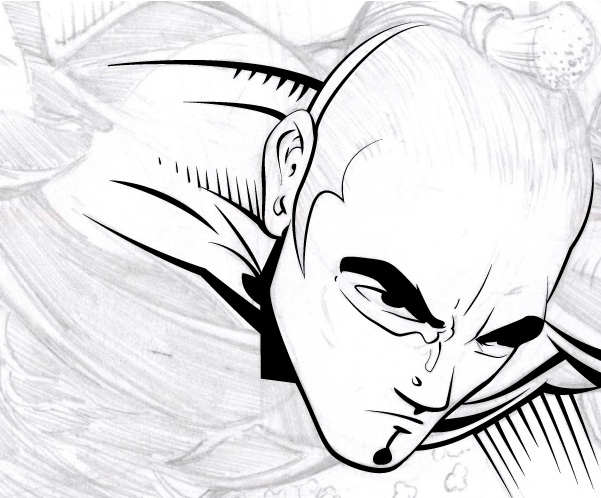 So, that's about as far as I'll take the digital inking portion of this tutorial. You can hopefully see the process I'm following. I'm sure you're dying to see the final art, so I'll throw that in here just for the fun of it. Believe it or not, I actually colored this entire piece of art in Illustrator! Believe it! If you'd like to see how I did that, I have a video tutorial coming soon to Go Media's Arsenal.

Well, that's it folks. Hopefully, another useful tutorial. I've certainly found a ton of uses for Illustrator's new Variable Width Stroke Tool and hopefully now you can also see its many uses.

Where to Find GoMedia

This tutorial was written by William A. Beachy, partner at Go Media Inc. Go Media is a creative agency based in Cleveland, Ohio. Besides writing tutorials for the GoMediaZine and Vectortuts+, we also work for clients and sell stock artwork and design files on the Arsenal. 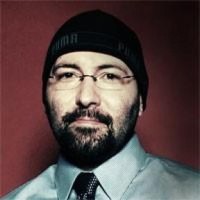 William Beachy
William A. Beachy, partner at Go Media Inc. Go Media is a creative agency based in Cleveland, Ohio. Besides writing tutorials for the GoMediaZine and Vectortuts+, we also work for clients and sell stock artwork and design files on the Arsenal.
Weekly email summary
Subscribe below and we’ll send you a weekly email summary of all new Design & Illustration tutorials. Never miss out on learning about the next big thing.
Advertisement
Download Attachment
Translations