Let's have a look at the final image below.

First, you are going to need to find a skull picture. I found a nice skull image on iStockphoto. You can download the same one here, or find a similar one.

Download the Green Fuzz font and install it on your system.

Next, you're going to need to download the Sketchy-Style brushes from Vectips. Once you have downloaded the AI file, open it up in Illustrator. Then you'll see the 30 brushes in your Brush Panel. For this tutorial, we're only going to use a couple of them.

With the Sketchy-Style brushes document open, change the document to Landscape Orientation by going to File > Document Setup and clicking the Landscape button from the Orientation choices. Select All (Command+A) of the artwork on the page and then Delete it.

Place your skull image by going to File > Place and find you skull image on your computer. Then Scale and Rotate the image to your desired position.

In the Brush Panel, click the pop-up panel and select List View. This view makes it easier to pick the name of the brush. With the skull outline selected, choose Vectips Sketch Brush 14.

Use your Brush Tool (B) and trace the most predominate lines inside the Skull. Use the same Vectips Sketch Brush 14, but change the stroke to .5 pt.

Use the Brush Tool (B) again, to trace the second most predominate lines inside the skull. This time change the stroke weight to .25 pt.

With the Pen Tool (P), create some solid shapes in the darkest part of the skull image and fill them with black.

Now you can go back and add more brush strokes here and there, finishing off the skull. Then turn off the Visibility on the skull image layer.

Create a new layer for the the wavy grunge element. Use the Brush Tool (B) and draw a flowing stroke. Use the same brush as before at 1 pt stroke. If you feel more comfortable drawing with the Pen Tool (P), then go right ahead. Just apply the brush after you've finished drawing.

Repeat the previous step until you have an outline of the wavy element.

Use the same technique as in the previous step and start filling in the wavy element with brush strokes. This time change the stroke to .5 pt.

Again, add some more brush strokes, but this time change the stroke weight to .25 pt.

Create a new layer for the text. Type out what you want and choose the Green Fuzz font you downloaded earlier. Outline the text by going to Type > Create Outlines.

With the outlined text selected, go to Effect > Warp > Arch to bring up the Warp Options. Change the Bend percentage to 18 and the Horizontal Distortion to -47. Expand the effect by going to Object > Expand.

Place the text over the wavy element. Then Scale and Rotate it as needed.

Once placed, Copy (Command + C) the text and Paste it in Back (Command + B). Then give the copied text a 9 pt. white stroke.

Create a new layer and place the layer below the other layers. Create a rectangle with the Rectangle Tool (M) at the size of your document. Then change the fill to a 23% grey.

With the Vectips Sketch Brush 19, draw a couple of strokes behind the skull. Then change the stroke to 9 pt, and creating some nice grunge elements.

Repeat the previous step and create some strokes behind the wavy element. All done!

Below is the final image completed! 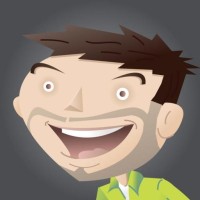 Ryan Putnam
With a rich background in fine art, graphic design, and illustration Ryan is Rype Arts’ rampant right brain – the branding medicine man with the right recipes for distinguishing imagery. He is fluent in multiple design disciplines and technologies. In addition, Ryan is the owner and operator of VectorMill, Vectips and Amperbranch. His personal passions for lettering, illustrating, and wheel-throwing pottery imbue his brand designs with a distinctive sense of organic artistic expression.
Weekly email summary