How to Make a White Holiday Scene in Illustrator

In this tutorial we create an entire winter landscape and fill it using numerous techniques, like blended blizzards, sprayed snowflakes, and more. The techniques we use to create this illustration are fairly basic, but we cover alot of ground here, and therefore the level of detail of the tutorial will appeal to an intermediate level audience. This is a great way to get in the holiday spirit! 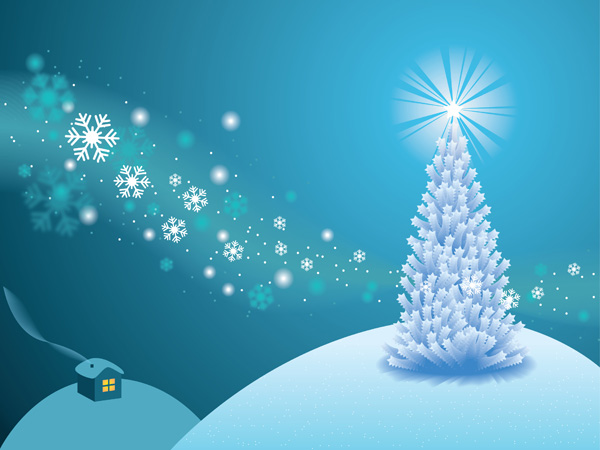 Let's create a new document that is 600 pixels by 600 pixels. Now we'll start to build our fir tree branches. Select the Polygon Tool, then click on the document, and print sides: 3 in a dialogue window. Select the created triangle out, apply Object > Transform > Reflect and then choose Axis > Horizontal > Copy. Move the top triangle down. The object will appear as it is in the image below. 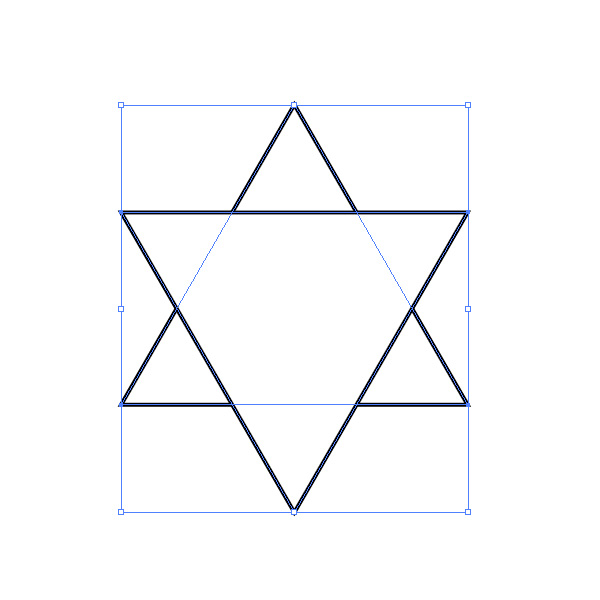 Select both objects and click Add to Shape Area in the palette Pathfinder and then Expand. Grab the Direct Selection Tool (A), and click the points shown below, while holding Shift. Now delete the selection points. 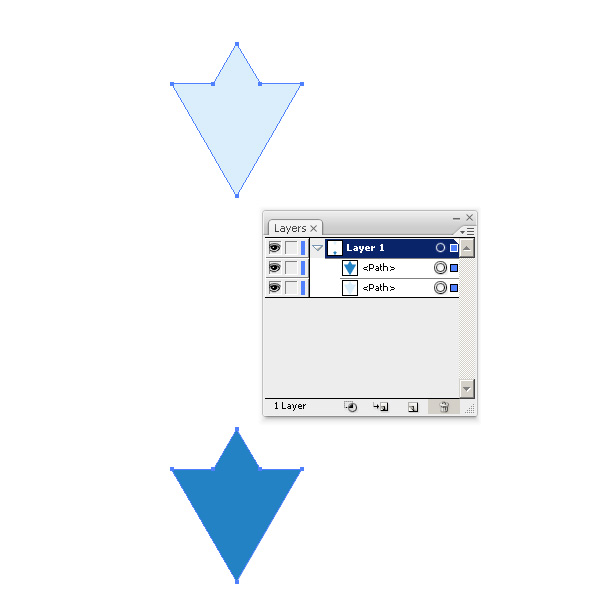 Work with all objects. Select all of them, then apply Object > Blend > Expand, then Object > Ungroup. Beginning with the second one on top, turn the shapes around by rotating 11 degrees. The second one 11 degrees, the third one – 22, the fourth – 33, by going to Object > Transform > Rotate.

The ultimate result is shown below. Group all the shapes of the fir tree branch.

Let's begin designing the fir tree. Create a new layer. Take the Pen Tool (P), draw a triangle, these are the fir tree shapes. Blockade the layer. Later, this layer will be deleted.

Create a new layer above all. Now duplicate our branches, setting and turning them in a way we like most in order to get a fir tree. Work with Alt-dragging shapes for duplicate and Command + Shift + Right Bracket Key (Bring to Front). For Further work create the black background under the layer of the fir tree. We'll review the creation of the background in later steps. 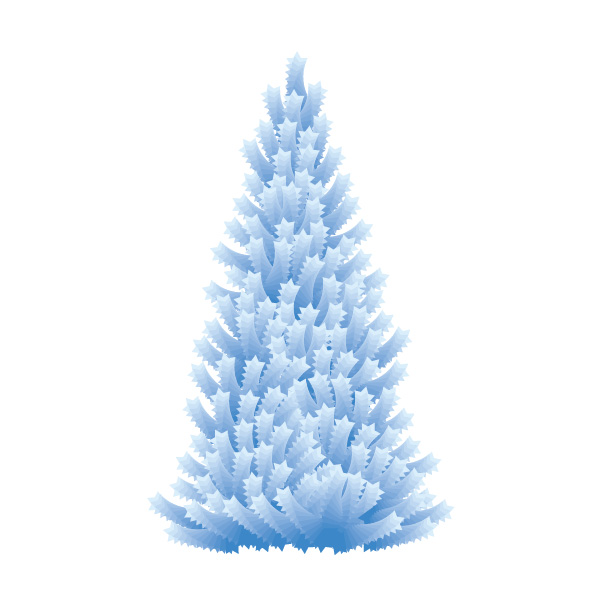 Let's create the star on the fir tree and make the luminescence. Create the first circle using the Ellipse Tool (hold Shift to constrain), then Fill with white and no stroke. Create the second circle, then go to Object > Transform > Scale a copy to 10%. For the first circle, set the palette Opacity to 0%. 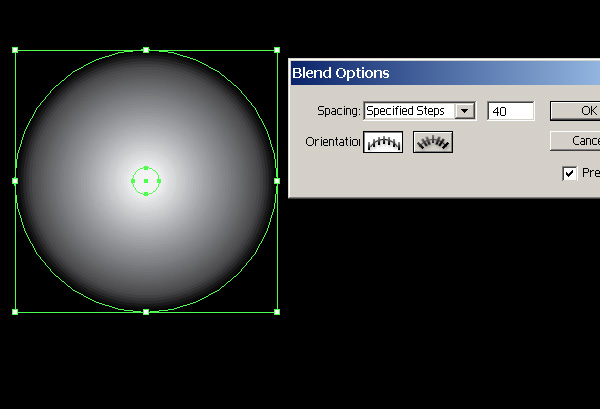 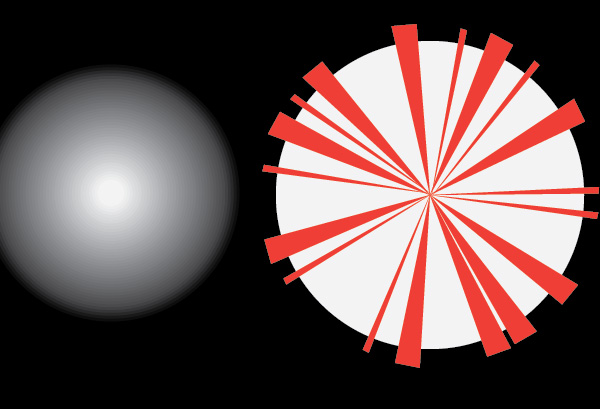 Select the triangles and circle out and use the Subtract from Shape Area, and then Expand from the Pathfinder palette.

Move the designed object to Blend, click the right button of a mouse along the shape of the object (Control-click on a Mac), and choose Make Clipping Mask from the Menu.

Put the resulting luminescence on top of the fir-tree. Create a five point star using the Star Tool, place it over the luminescence as shown. 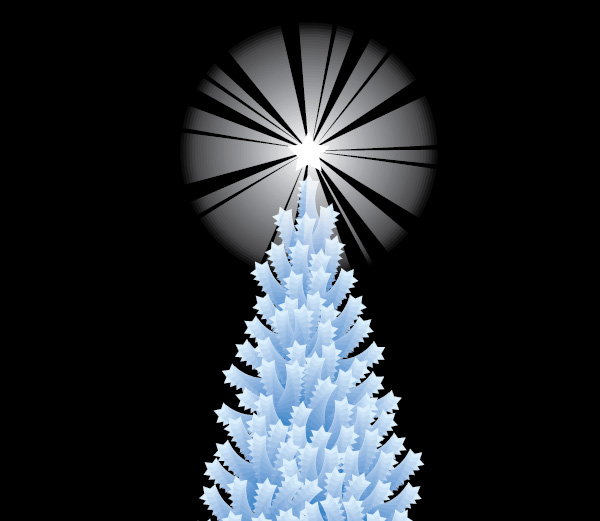 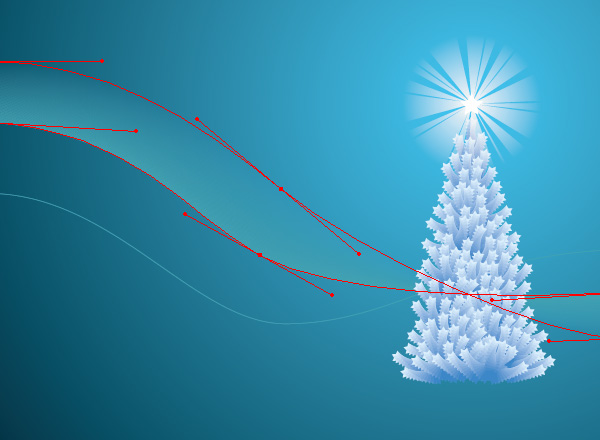 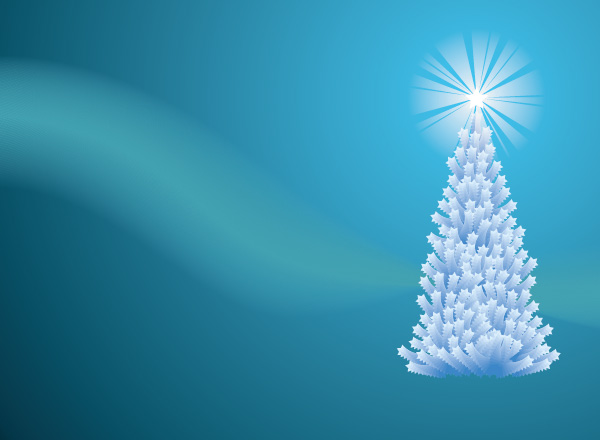 Now let's create the snowflakes. We'll create the new "snowflake 1" layer above the "blizzard" layer. Create two 3px by 3px circles, set the color files to: C=71, M=20, Y=28, and K=0 for one and white for the other. Drag the circles into the Symbols palette. Splash snowflakes over the snow storm with the help of the Symbol Sprayer Tool (Shift + S). 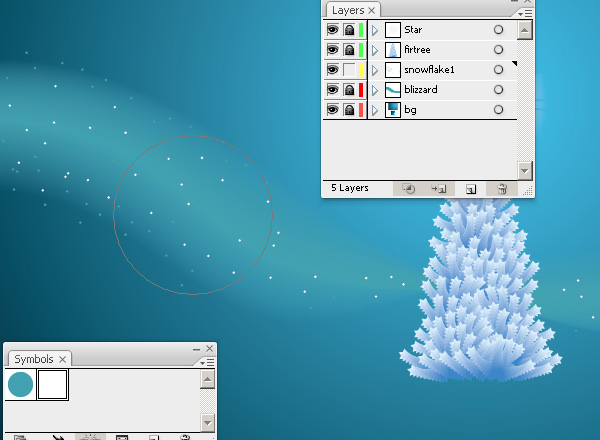 Now we'll create the big snowflakes. Create two circles 20px by 20px and 3px by 3px with the colors C=71, M=20, Y=28, and K=0. Align them vertically and horizontally on top of each other with the help of the Align palette. Set the opacity to 0% for the bigger circle. Select both circles and create a Blend. Then we create a few similar snow-flakes.

The result is taken to the Symbols palette. Splash these snowflakes using the Symbol Slayer Tool (Shift + S). 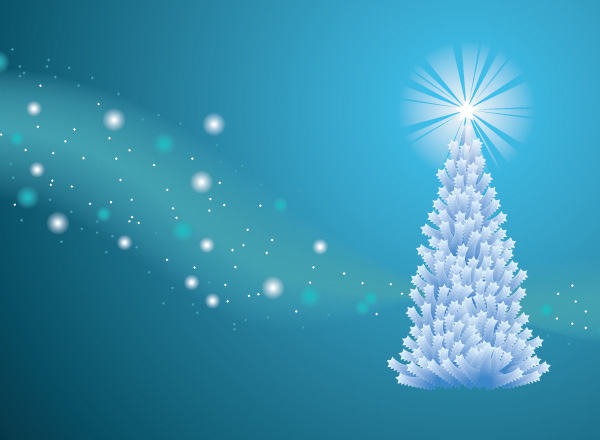 Now we'll create a classic shaped snowflake. Create the form using the Pen Tool (P) and work to achieve a result similar to the image below.

Now go to Object > Rotate and enter 60. Use Command + D (repeat the operation) twice. Create a circle and set it in the center of the snowflake. Select the whole snowflake and Add to Shape Area, then Expand from the Pathfinder palette.

Now we'll make this new series of snowflakes using Effect > Blur > Gaussian Blur with a Radius of 6px for the blue snow-flakes.

Set the snowflake above the snow storm by duplicating and changing the size and transparency. 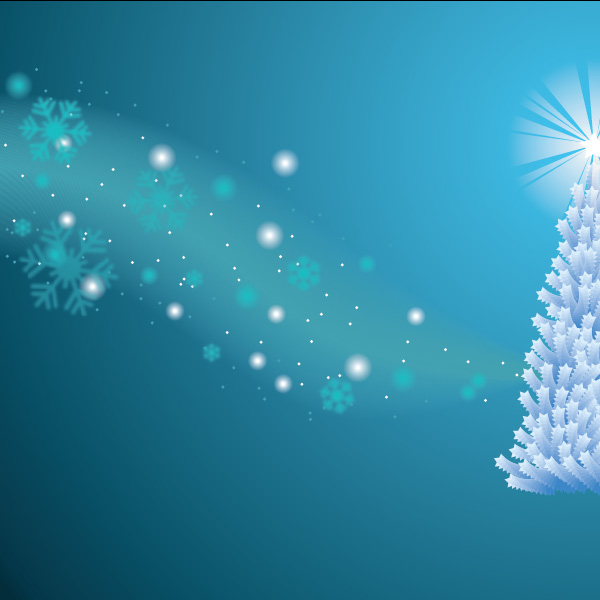 Let's work on the foreground of the snow storm next. Create a new layer named "snowflake2," where we'll be place the white snowflakes as shown.

Let's design our snow hills next. A new layer of snow is put under the "bg" layer. Now draw two forms here with the Pen Tool (P). One form is filled over with a linear gradient and the other by a solid color. 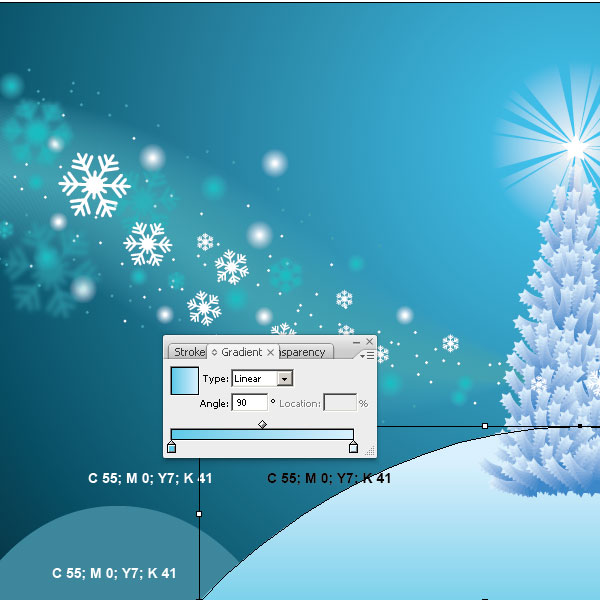 We'll create the shadow under the tree next. Draw two ellipses - one within another. Fill them over with the color: C=75, M=39, Y=0, and K=0. The outer ellipse will have an Opacity of 0%. Select the two circles and create a Blend.

Select the outer ellipse with Direction Selection Tool (A) and use the Wrinkle Tool to achieve an effect shown below.

Now we'll create the texture of the snow. Make a circle 1px by 1 px with the help of Ellipse Tool (L). Fill the it with a white color and move it into the Symbols palette. Using the Symbol Slayer Tool (Shift + S), spray the snowflakes we just created about. 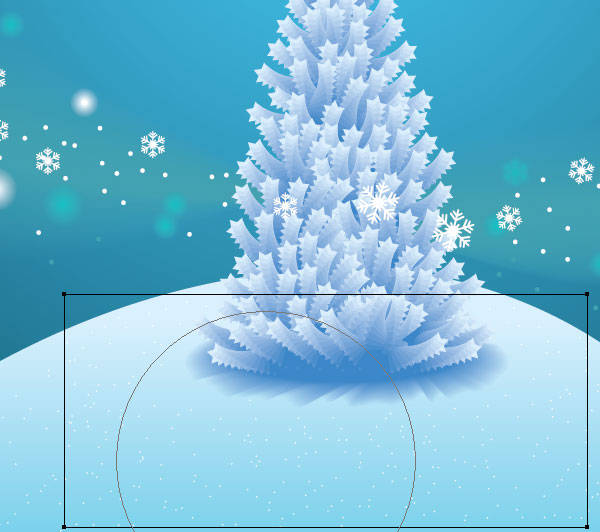 Now we'll design a house in the background. Create a house above the the "Snow" layer. Make the rectangle and fill it with the color C=60, M=0, Y=0, and K=80. Then go to Effect > 3D > Extrude Bevel and hit OK (don't change the default parameters). Now apply Object > Expend Appearance. 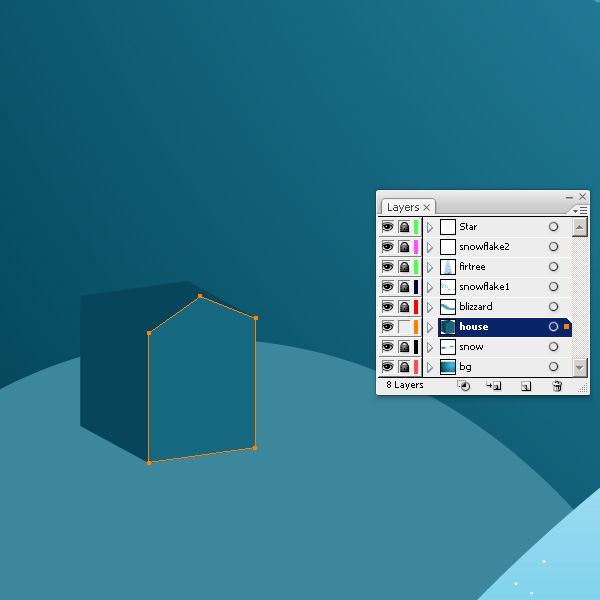 Draw snow on the roof of the house using the Pen Tool (P). Use the Rectangle Tool (M) to drawing a chimney and a window for our house. 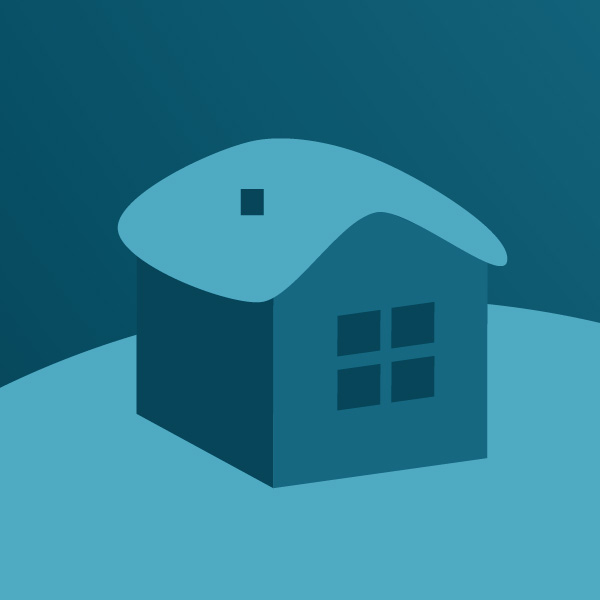 Group all the elements of a the window and apply a radial gradient to them. 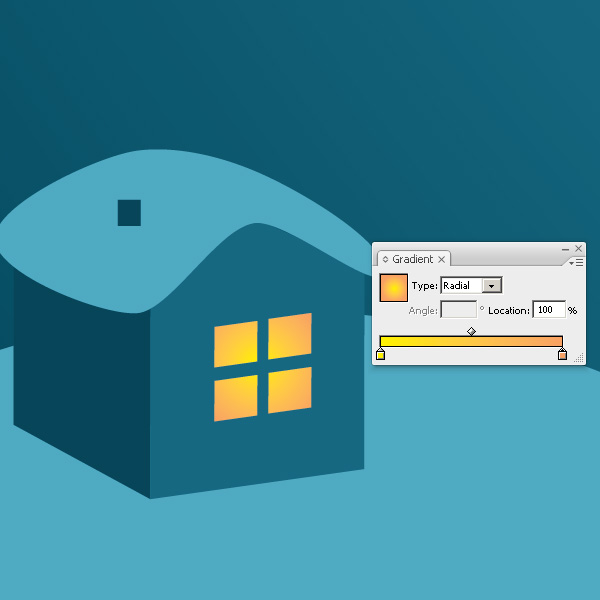 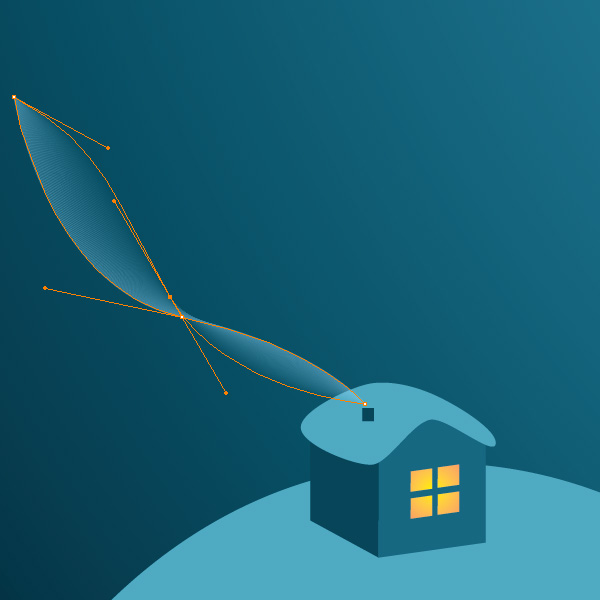 Happy Holidays to all of you. The final image is below.