How to Make a Melting Camera Scene

In this tutorial, we'll use the Layer Mask Tool and Liquify filter to "melt" the camera. I recommend you work with a tablet for this one (it makes your work easier), but if you don't have one it is also possible to go through this tutorial. Let's start! 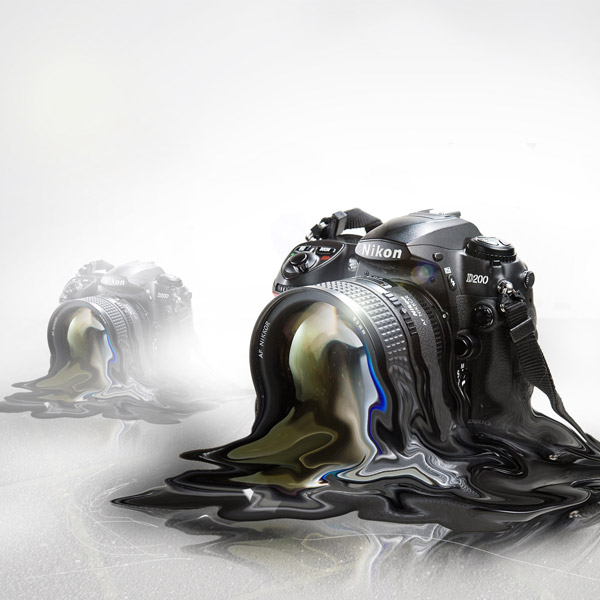 Open the camera file by bennorz, double-click on the layer to unlock it and create a new one beneath. Fill the new layer with a red (#ff0000) color. Now you have a red background beneath the camera layer and it makes it easy to see borders of the object when masking. It is not necessary to use red, but it is better to use a color which is not in the object.

Apply a layer mask to the camera layer. Be sure to have it selected when masking. 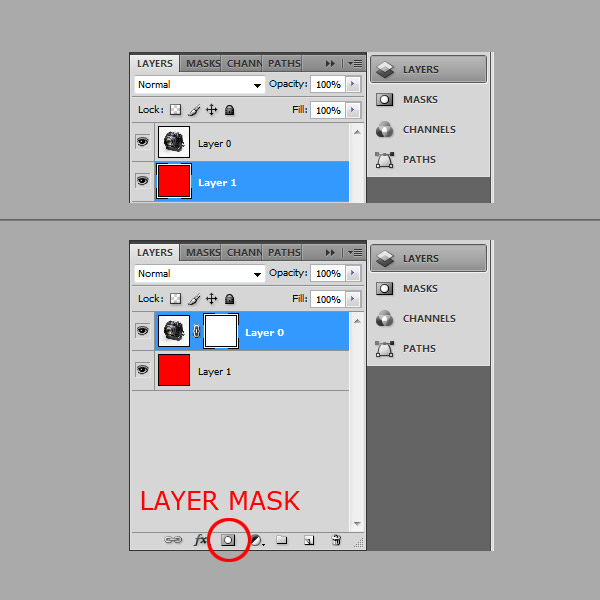 Masking is the non-destructive way of removing parts of the image especially the background. That's because erasing is done on the mask not on the image so you can create a mask and then delete it and the image stays untouched. Other great things of masks are that you can use a variety of tools to create it such as the Pen Tool or brush.

This time we will use the brush technique. Select the Brush Tool and set its Hardness to 93% - a mostly hard brush creates better borders on objects. Now we are ready to start masking. 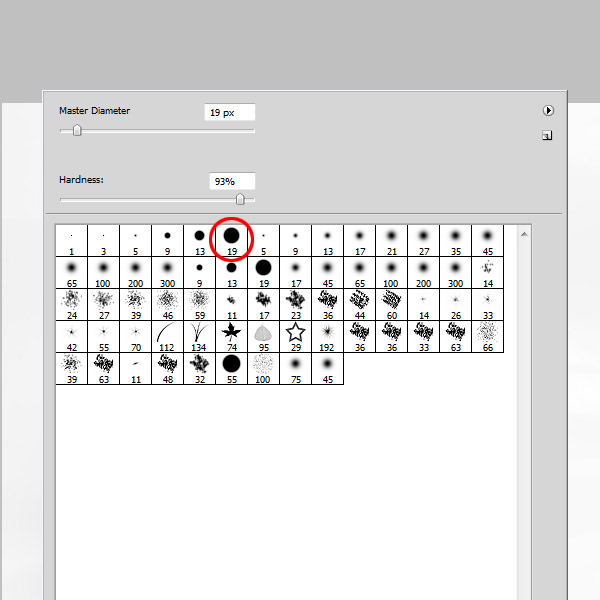 So mask everything except the camera - just paint around the camera, zoom in and out and resize the brush to get the adequate effect. Pay more attention to corners - the most critical ones are shown in white circles below. Here you should be most precise. It may take you some time practicing before you are used to it.

Create a new document that is 1600 px wide and 1200 px high at a resolution of 72 pixels/inch and fill the "Background" layer with a gray (#dfdfdf) color. Put the masked camera image into this document. If you have the document with the camera still open, then you can just drag it with the Move Tool (V). It will create a new layer with the camera in the workspace. There is still the mask which we won't need to edit so right-click on it and choose Rasterize Layer.

Now we have the camera ready. So duplicate the layer, then resize it as shown below. 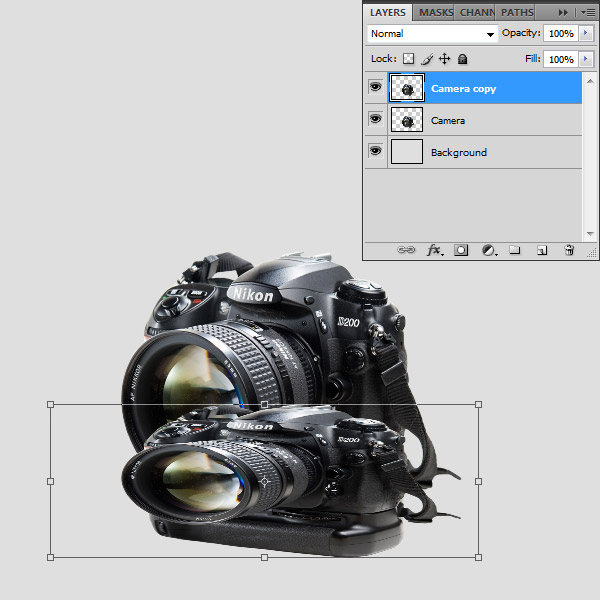 Now it's time for the Liquify filter. You can find it in Filter > Liquify filter (Shift+ Command + X). Then just drag parts of the camera image the way the arrows show. Bear in mind that the camera is laying on the plane and the effect should have a little perspective so you have to play with the technique a little bit to get adequate results. 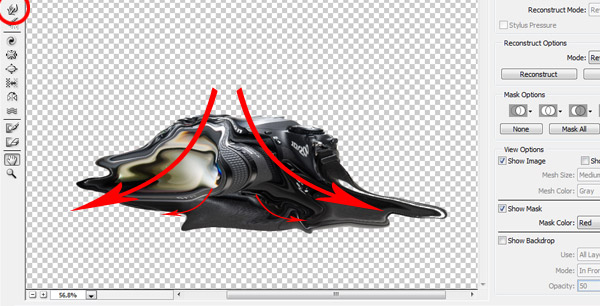 Grab the Eraser Tool (E) and set the Hardness to 0%, then select the "camera" layer, not the melted one. Now erase it to almost fit the melted copy. Then select both layers, the not melted and the melted ones, then merge them. You can merge layers by selecting them and press Command + E. 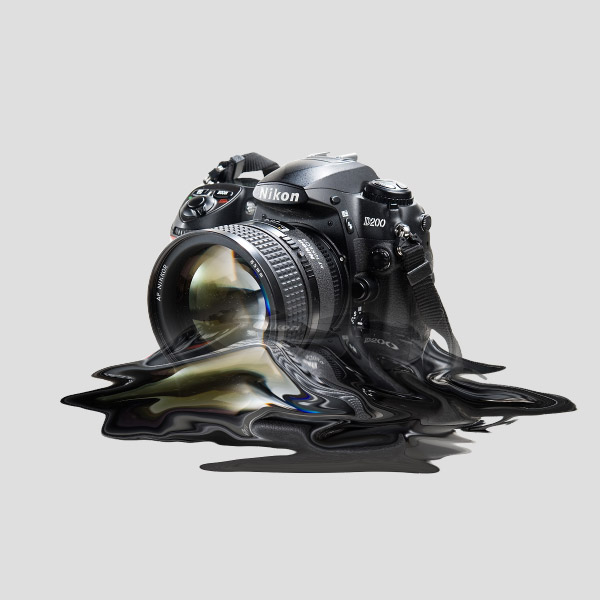 Now open the Liquify filter and polish the melting effect on the merged image. Then duplicate the layer and move it to the bottom, just above the background layer. Then go to Edit Menu > Transform > Flip Vertical, and adjust the position of the result. 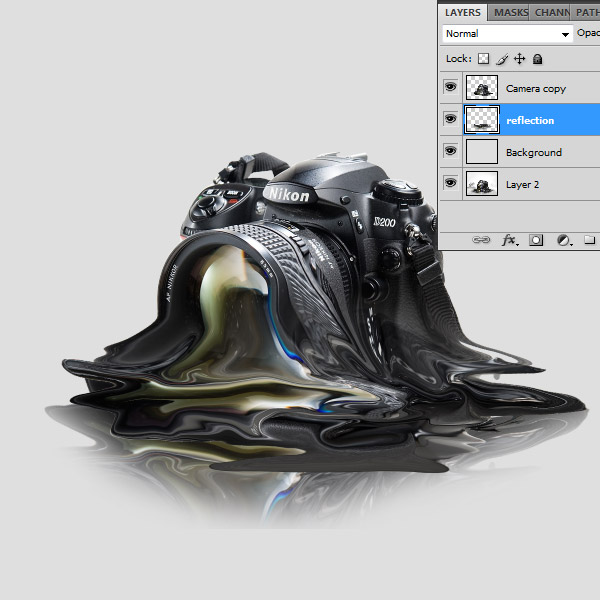 Now we are going to create the ice plane. Just open the tiles photo and put it into the scene. Scale it by going to Edit > Transform > Scale (Command + T). Now drag the corner with the while holding Shift to fit the document width, and then duplicate the layer. These two layer should be arranged at the bottom of the scene just above the "Background" layer. Arrange the duplicated layer to the top-left corner as shown below.

Merge the two plane layers. Decide where is the horizon line and delete the remaining part of the image above it. Then grab the 300px Brush Tool with Hardness set to 0 and delete the border of the image to create a blurred effect. Then set the Opacity of the layer to 25%. 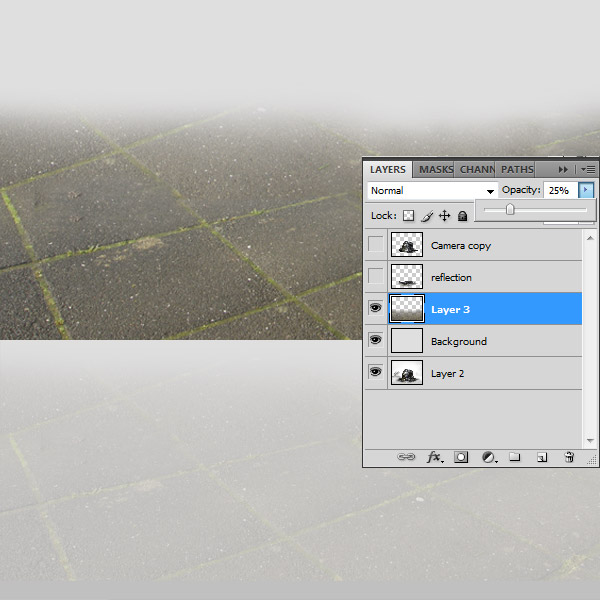 Now select the layers of the camera and its reflection and merge them. Then create one more duplicate of the result layer. Drag these two copies of the camera to the exact positions and resize them to create the illusion of space.

The layers of the cameras should be behind each other in size and ordered from larger to smaller. Create a new layer just beneath the layer with the largest camera. Then grab the Brush Tool and set the Hardness to 0. Select 100% white and play around with Brush sizes to draw fog around the cameras. The simple rule is to avoid the tendency to cover the whole space with white. 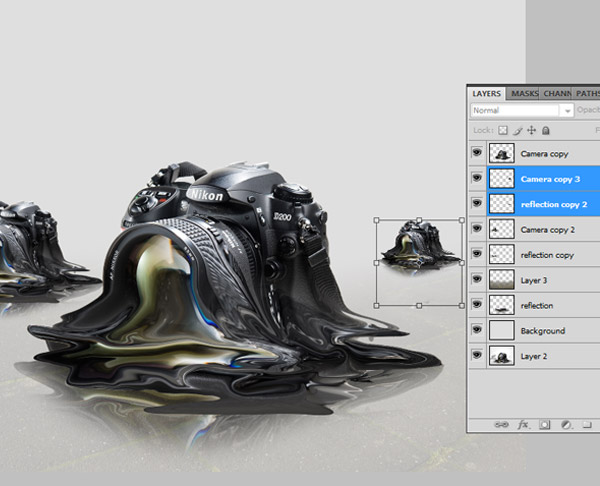 To create more illusion of space the cameras should be disappearing a bit, so set the Opacity of the smallest one to 25% and 55% for the middle one. 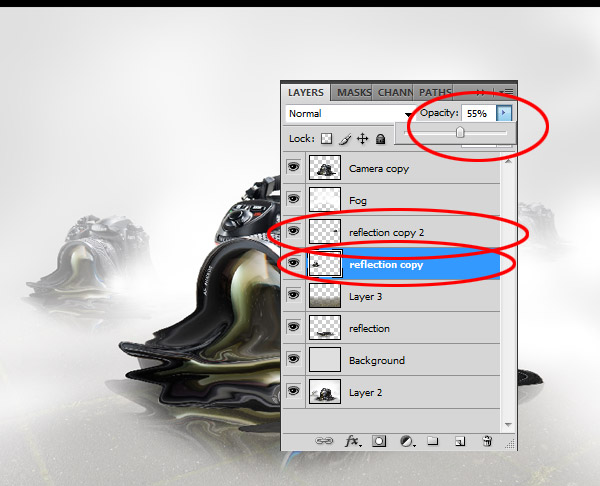 Now we bring some light into the image. Select the largest camera layer. Go to Filter > Render > Lens Flare, and choose the 105mm Prime with 76% Brightness. Then adjust the position of the reflection to the top of the lens.

Now we are almost finished. We can also add some scratches to the ice plane. Grab a 1px size Brush and set a white color for it.

If you think the scene needs more realism, then you can add some shadow beneath the largest camera layer. Create a new layer and draw the shadow with a black color. Now adjust the Opacity or set the layer style to Overlay. 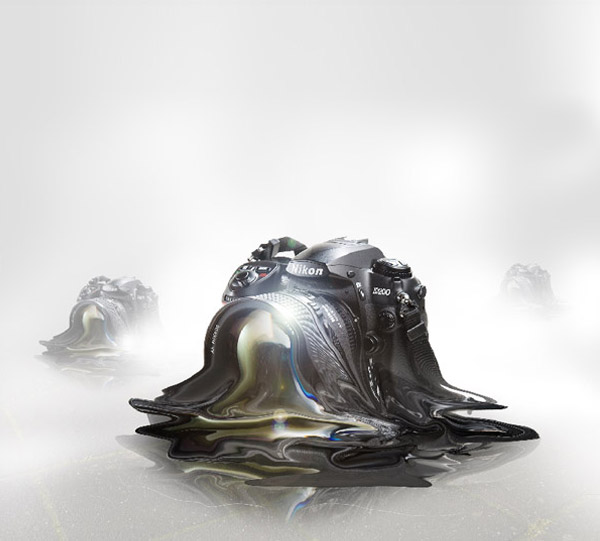 Now we have finished the illustration of a melting camera. You can add some typography to it and get to create a really nice camera ad or use it as is.

Peter Kalous
I am the freelance designer and artist from Czech Republic working mostly in Adobe's design premium apps. I focus my work on printed and web media and I really adore good graphic design works because there are lot's of 'graphic designers' but there are too few Graphic designers.
Weekly email summary