How to Illustrate a Wooden Frame on a Wall Scene

In this tutorial, you'll learn how to draw a wooden frame. We'll place a photo inside the frame, add some reflection and dirt to the glass, then place the frame on a wall. You can take your favorite picture and make it look like it's hung in your home. Let's get started!

First, take a look at the image we'll be creating. As always, the layered Photoshop file is available via our Psdtuts+ Plus membership. You can view the final image preview below or view a larger version here. 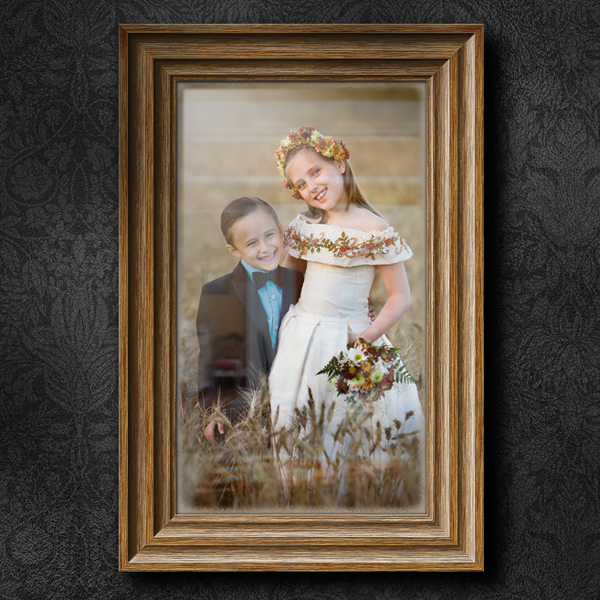 First we'll create the frame. Although our final image will be 1200 pixels wide and 800 pixels high, we'll start by drawing a frame which is bigger than our final image. Thus we'll have more detail on the frame, then we'll scale it down to fit in our final composition. Now create a new document using the settings shown below. 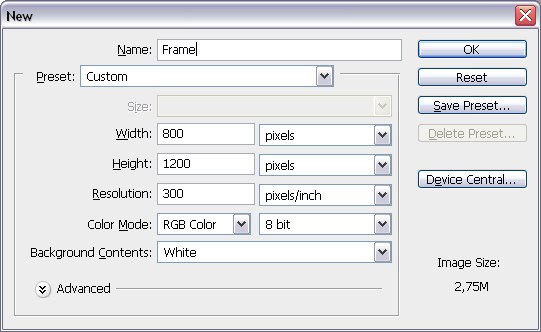 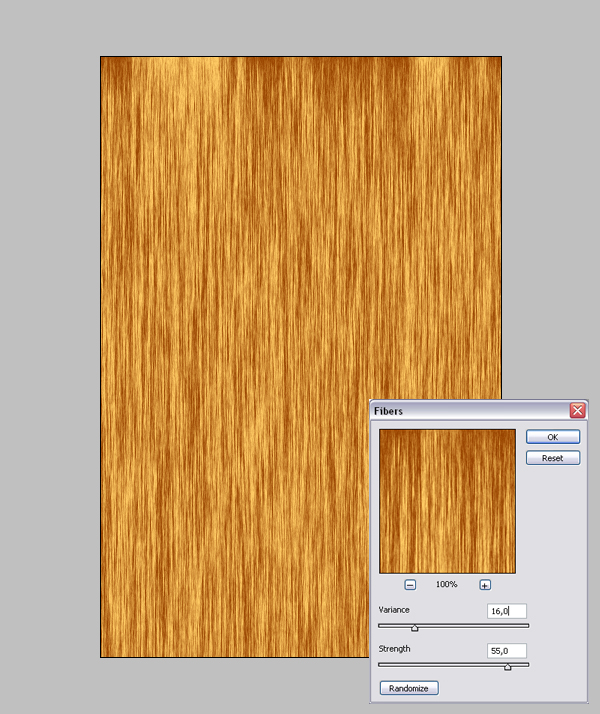 Create a new layer and name it "Dent 1." Get the Rectangular Marquee Tool, make sure Style is set to Fixed Size, then set the Width to 38 pixels and Height to 1200 pixels. Make a selection as shown below. The selection I made is 20 pixels away from the left edge, so you can place the selection to the most left of the canvas and move it 20 pixels right by hitting the Right Arrow key two times, do this while holding the Shift key. Fill the selection with the Foreground color and the Deselect.

This rectangle is going to be one of the dents in our wooden frame. We'll now apply two layer styles to it. First set the layer's Interior Opacity (Fill) at 0%. Now apply a Bevel and Emboss layer style to the layer using these settings: Style set to Inner Bevel, Depth set at 75%, Direction set to Down, Size set to 40 pixels, and Highlight Mode Opacity set at 100%. Next, apply a Gradient Overlay and use the following settings: Blend Mode of Multiply, Gradient set at Black to White, Opacity set at 70%, Angle set to 0 degrees, and Scale set at 150%.

We are going to make two more dents. Create a new layer named "Dent 2." Get the Rectangular Marquee Tool and set the Width to 32 pixels and make a selection. Snap the right edge of the selection to the second vertical guide and move the selection 18 pixels left. Fill the selection with the Foreground Color. Create another new layer and name it "Dent 3." 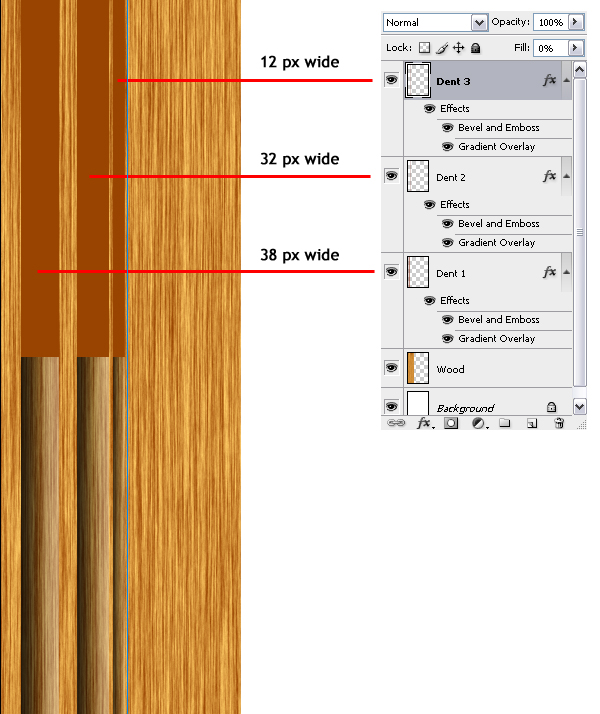 Now we're almost done with the left piece of our wooden frame. Select all Dent layers and the "Wood" layer in the Layers Palette and go to Layer > New > Group From Layers. Name the group "Left." Duplicate the "Left" layer group and name it "Right." Make the "Right" layer group invisible for now.

Go back to the "Left" layer group, open it, then go to the "Wood" layer. Also, make sure Guides are visible. Grab the Rectangular Marquee Tool, set the Style to Normal, and make a selection as shown below, and hit Delete to clear the selected area. Deselect by hitting Command + D. Select the "Left" group in the Layers palette and go to Layer > Merge Group (Command + E).

Go to the "Right" layer group in the Layers Palette and open it. Select the "Wood" layer and go to Edit > Transform > Flip Horizontal. This way we won't have the exact same texture in for the left and right pieces. Get the Rectangular Marquee Tool and make a selection as shown, then clear by hitting Delete. Deselect by hitting Command+ D. 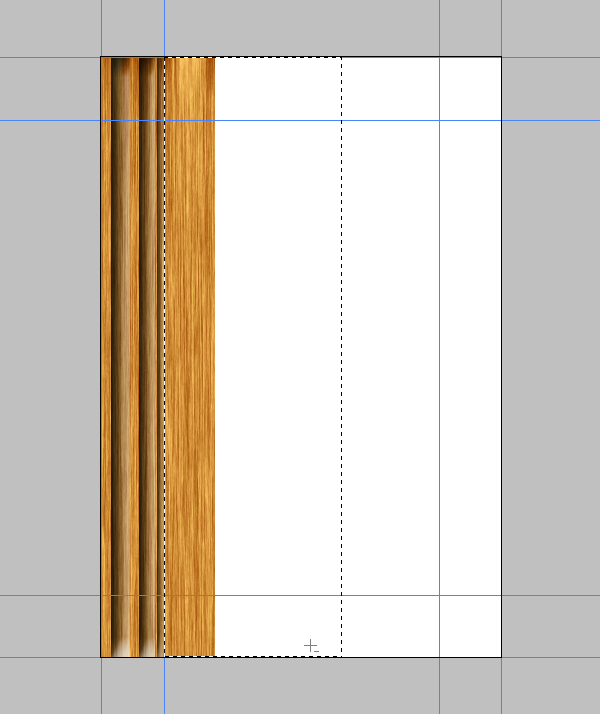 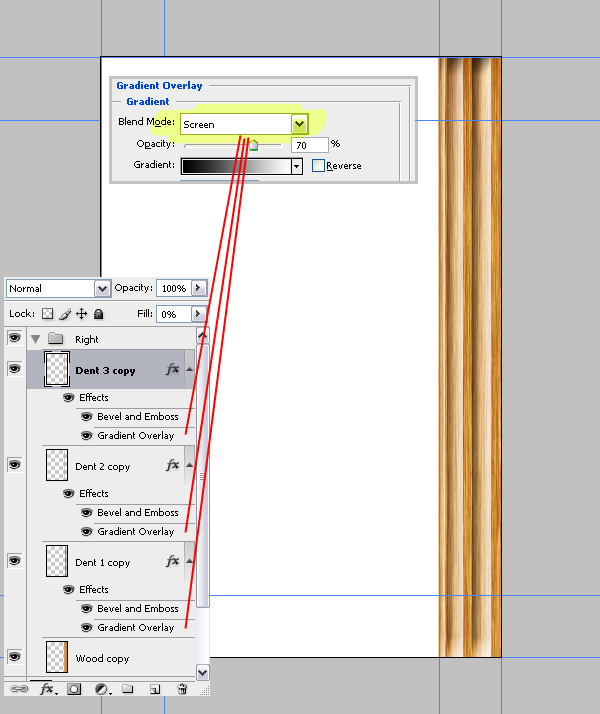 Grab the Polygonal Lasso Tool and make a selection with the help of the guides, as shown below, then hit Delete to clear. 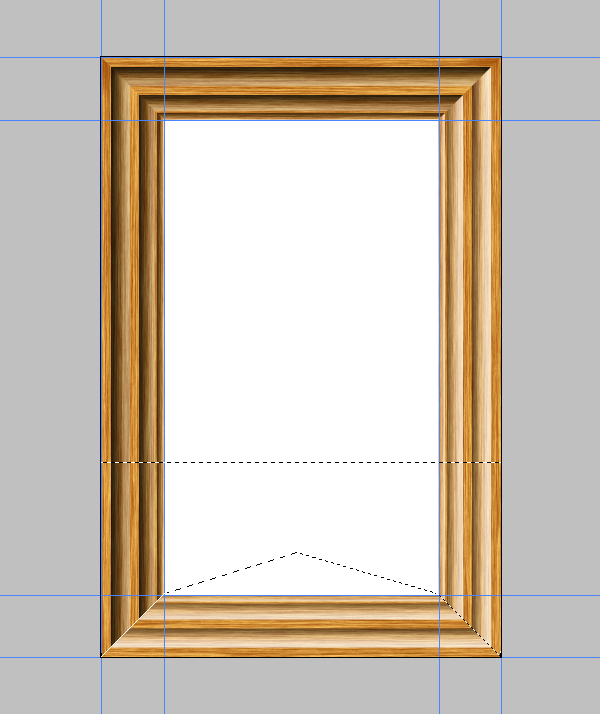 Hit Command + A to select all and then hit Command + C to copy. Go to the Channels Palette and create a new channel. Hit Command + V to paste. Go to Filter > Artistic > Paint Daubs. Set the Brush Size to 1, Sharpness to 10, and set the Brush Type at Simple. Command-click the Alpha Channel to load the white areas as a selection.

Go to the Layers Palette and select the "Frame" layer. Go to Layer > New > Layer via Copy and name the new layer "Bumps." Apply a Drop Shadow to the "Bump" layer with these settings: Blend Mode set to Multiply, Opacity at 90%, Angle set to 120 degrees, Distance and Size set to 3 px.

Now select all the layers other than the "Background" layer and merge them by hitting Command + E. Name the merged layer "Frame." Now we need a photo to put inside the frame. I used a photo from Stock.xchng, uploaded by papaleguas. You can download it here.

Open it in Photoshop and drag the image into your "Frame" document, place it beneath the "Frame" layer, then scale and position as shown below. Name this layer "Photo." 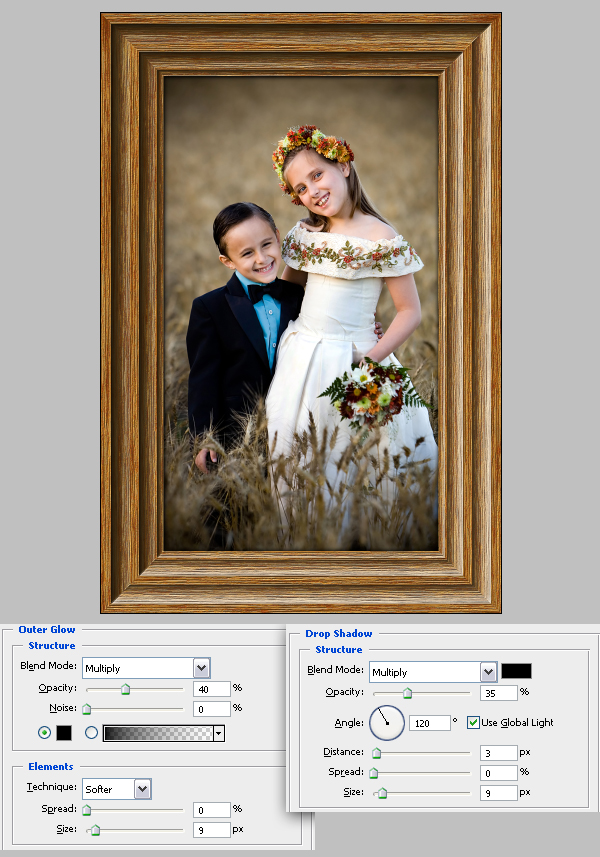 It is now time to make the glass. Actually, we'll make the reflections. You can get the image that is reflected on the glass here. It's a photo from Stock.xchng uploaded by the swedish.

Open it in Photoshop and drag it into your "Frame" document, then scale and place as shown below image. Go to Filter > Blur > Gaussian Blur and apply with a Radius of 3 pixels. Set the Layer Blending Mode to Screen and Opacity at 15%. Name this layer "Ref 1."

We need two reflections on the glass, so duplicate the "Ref1" layer and name it "Ref 2." Move the "Ref2" layer five pixels left.

Hit Command + T and scale the highlight down horizontally and up vertically, as shown below. Go to Filter > Blur > Gaussian Blur and apply with a Radius of 3 pixels. 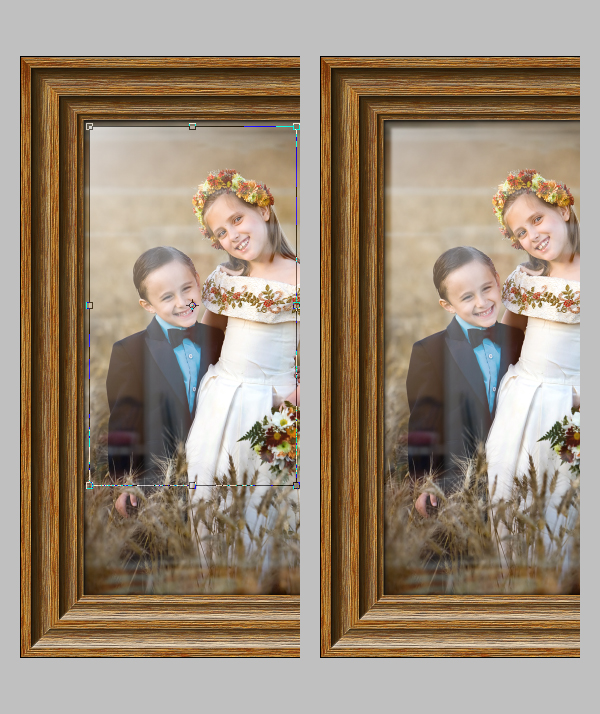 Now we'll make the dirty edges of the glass. Go to the Channels Palette, create a new channel, and name it "Dirt1." Go to Filter > Render > Clouds. Go to Filter > Artistic > Film Grain, set the Grain to 9, set the Highlight Area and Intensity to 0, and hit OK. Go to Filter > Brush Strokes > Accented Edges, then set the Edge Width to 1, Edge Brightness to 20, Smoothness to 1 and apply.

Create another channel and name it "Dirt Area." Make sure the guides are visible. Grab the Rounded Rectangle Tool, set it to Fill Pixels, set the Radius to 25 pixels, and choose white as your Foreground color. Draw a rectangle as shown below. 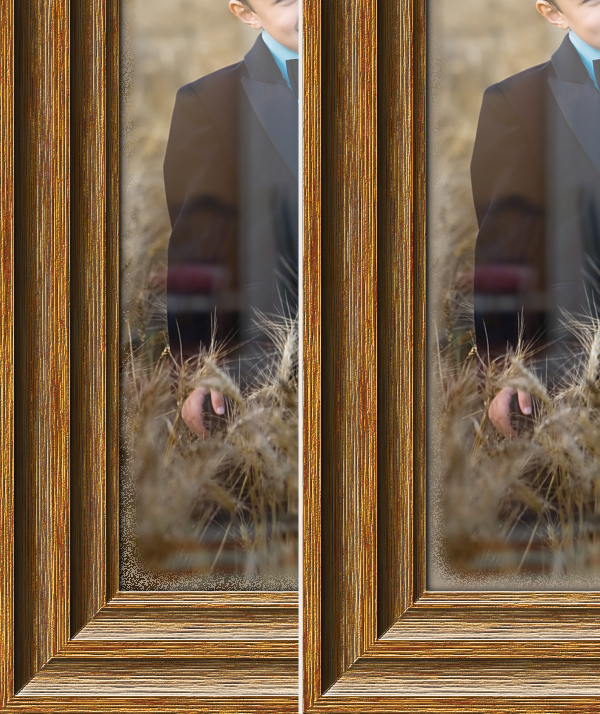 The frame is almost finished. Before we merge the layers, lets make some final adjustments. Go to the "Frame" layer and hit Command + U to bring up the Hue/Saturation dialog. Set the Saturation to -15. Go to the "Photo" layer, press Command + U again and set the Lightness to -10 and apply. Now we're ready! Go to Layer > Flatten Image. 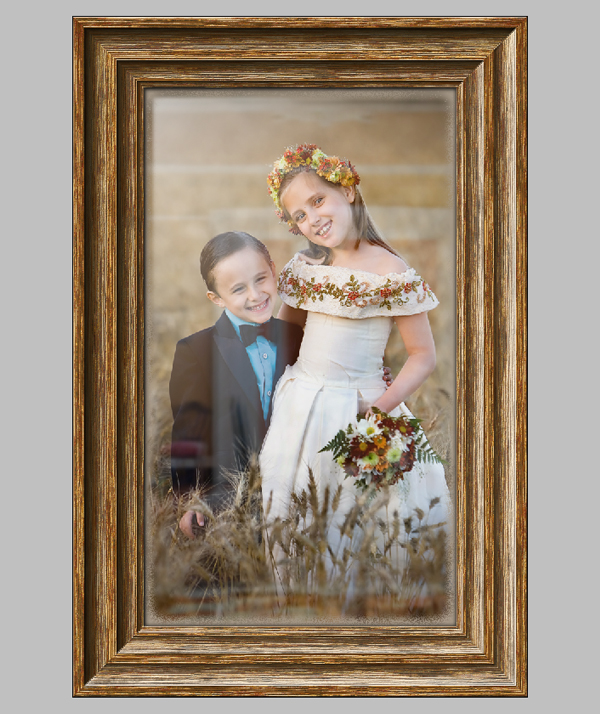 Now we can start making the wall. Let's create a new document 1200 pixels wide and 800 pixels high with a resolution of 300 pixels/inch. Create a new layer and name it "Wall." Set your Foreground to 85% gray and Background Color to black. Go to Filter > Render > Clouds. Go to Filter > Distort > Glass. Set Distortion to 20, Smoothness to 1, Scaling to 120%, and set the Texture to Frosted. 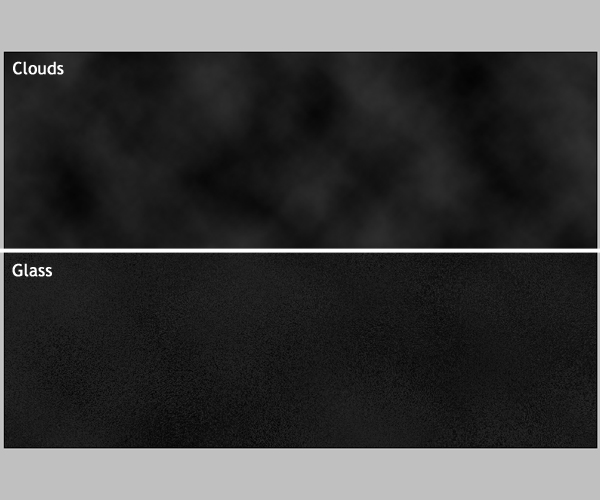 Go to Filter > Render > Lighting Effects and apply with the settings from the image below. Next we'll cover the wall with a wallpaper. I used the "Free Wallpaper Patterns for PS7+" by c130 which I downloaded from the Brusheezy web site. You can download the Photoshop pattern here.

Copy the "wallpapers.pat" to the Presets\Patterns folder in your Photoshop directory. Apply a Pattern Overlay Layer Style to the "Wall" layer and use these settings: Blend Mode set to Overlay, Opacity at 20%, Pattern set to Floral. To load the patterns you downloaded, open the Pattern Picker, then click the little triangle icon to open the menu and select Load Pattern, then pick the "wallpapers.pat" file.

Go to your "Frame.PSD" document and drag the image to the "Wall.PSD" document, do this while holding down the Shift key so it is centered on the wall. Name the layer "Frame." It needs to be scaled down so hit Command + T and set the Horizontal and Vertical Scales to 50% and apply.

Create a new layer below the "Frame" layer and name it "Shadow." Command-click the "Frame" layer thumbnail to load it's pixels. Fill the selection with black and Deselect. Hit Command + T and rotate -30 degrees. Hold down the Alt key and press the Right Arrow key twenty times. Select all the shadow layers in the Layers Palette and merge them by hitting Command + E.

Hit Command + T and rotate the shadow 30 degrees. Go to Filter > Blur > Gaussian Blur and apply with a Radius of 10 pixels, then place the shadow as shown. 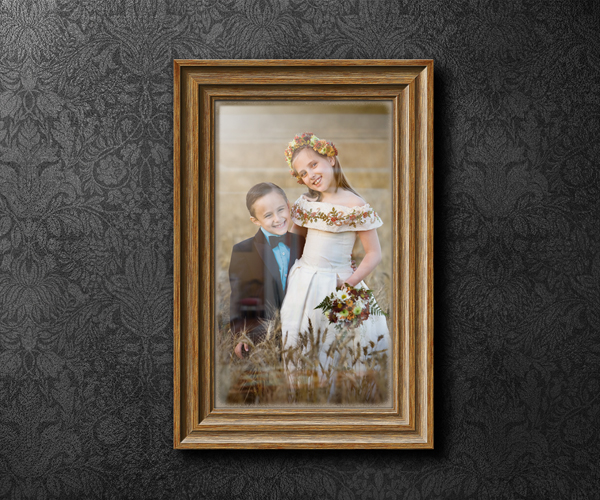 Create a new layer on top and name it "Tree Shadow." Get the Brush Tool, pick Scattered Maple Leaves brush and set the Master Diameter to 130 px. Open the Brushes panel and Under Shape Dynamics, set Size Jitter to 50% and Under Scattering set Scatter at 300% and Count to 3. Set the Foreground Color to black and paint as shown.

As the final step, go to Filter > Blur > Gaussian Blur and apply with a Radius of 50 pixels. Set the Opacity of the layer at 70%. This will give us some light and shade and also the frame will become the focus of the illustration. That's it! Hope you found this tutorial useful! You can view the final image below or view a larger version here. 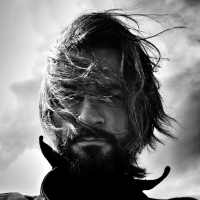 Eren Goksel
I'm a lecturer in Anadolu University. Photoshop, Max, and CorelDraw are my favorite tools.
Weekly email summary
Subscribe below and we’ll send you a weekly email summary of all new Design & Illustration tutorials. Never miss out on learning about the next big thing.
Advertisement
Download Attachment
Translations