How to Create Your Own Stylized, Vector Badge

In this tutorial, we will learn how to illustrate a face with the help of a photo, and how to create a customized pin button out of it. This is a fun tutorial using relatively simple techniques. Let's get to it! 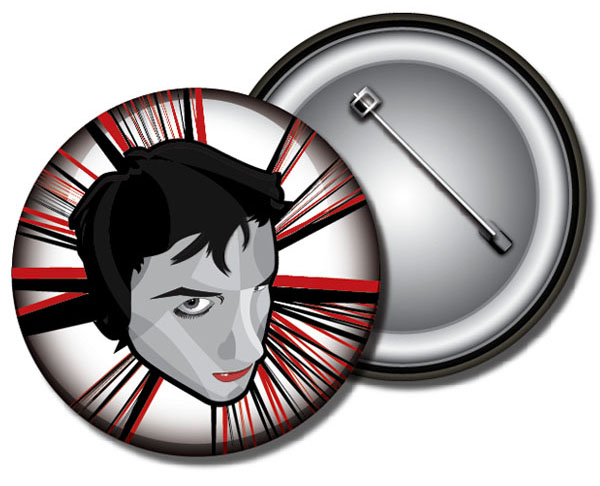 I went over to stock.xchng and picked a photo that I thought would suit an illustration for a face. The guy had such a cool look on his face that I couldn't pass. Let's start with placing the image into a new Illustrator document. 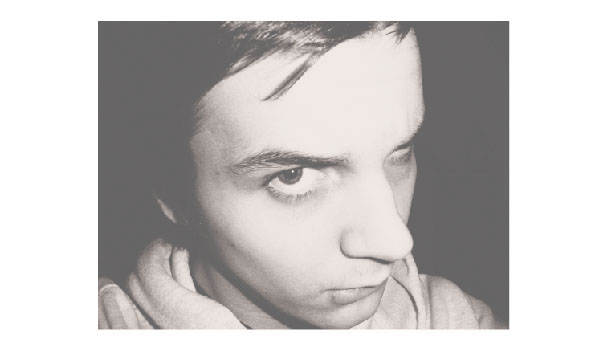 Lock the image layer and create a new layer. Then start tracing the face with the Pen Tool (P). I chose a gray since I am going for a black and white look. 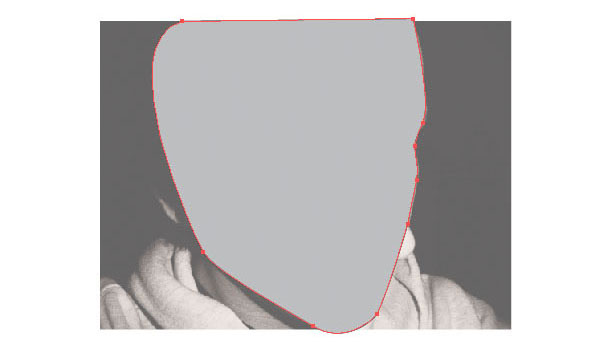 Start tracing the eyebrow with a black fill. Be as easy going about it as possible. We are not going for a photo realistic look, but rather for a stylized one. 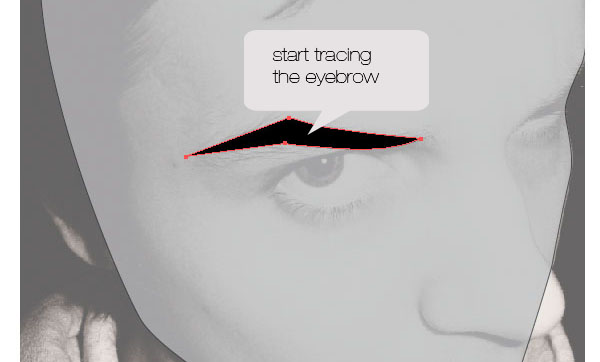 Trace the other eyebrow too, as shown below.

Then move on to the eyes themselves. Start by simply tracing the outline.

I filled the eye outline shape with a light gray. Then add the eye details. Simple but effective. Just add a shape filled with a darker gray. 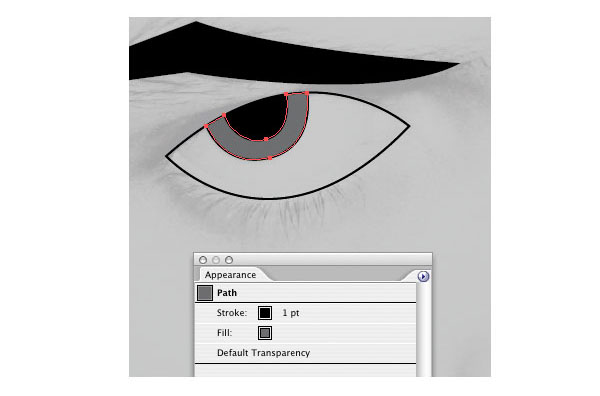 Then add the pupil as a half moon black filled shape.

Add some highlights to bring the eyes to life. You can do that by simply adding two small white circles and place them into the pupil.

Next we need some eyelashes. Take the Pen Tool (P), and start tracing an eyelash, then duplicate it several times and place them around the eye. 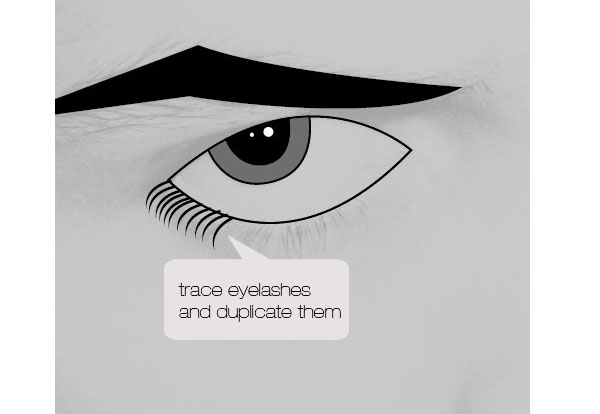 Next we will trace the lips. Again, keep the shapes simple, just trace in easy shapes with the Pen Tool (P). Remember, the Pen Tool is your best friend. Now fill the shapes with a red color and a black stroke, and fill the upper lip with a darker red. This will give the face a dramatic look, since we kept the other shapes black and white.

Start tracing the hair. Since the photo cuts of the rest of his head, we need to get a little creative. Just imagine the hair and add as many points and loops you need. Fill it with black. 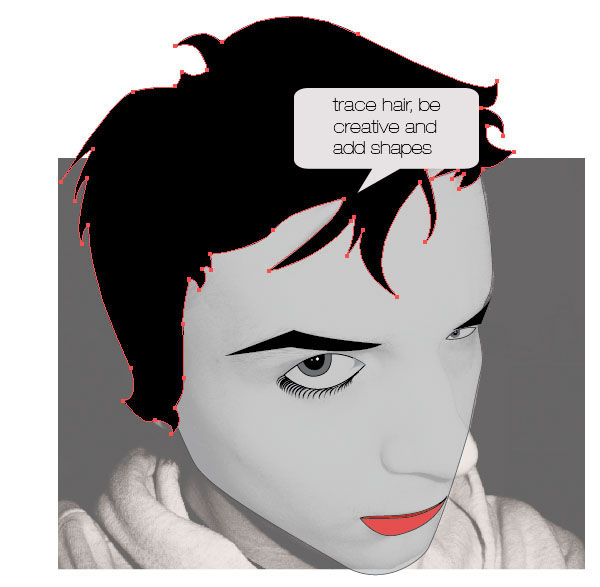 Don't forget the nose. Trace it and then fill it with a
gray gradient, linear or radial, it depends on how it will blend in with his face color.

Here is the finished face. I went ahead and stylized it some more, sliced it up, and filled each shape with a different gray or black. 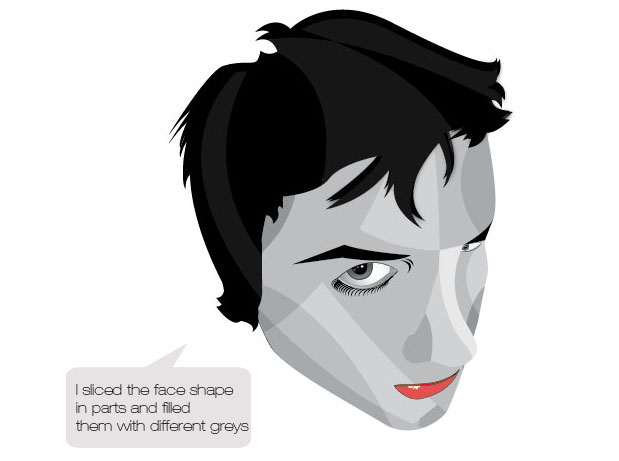 Let's move on to the pin button. Create a circle and fill it with a white to black radial gradient, then add a Drop Shadow. Set the Layer Mode to Multiply.

Make two copies of the circle, scale one down and set the
Layer Mode to Normal. Now add a gray Stroke of 6pt to the inside. Select both and Divide them via the Pathfinder palette. 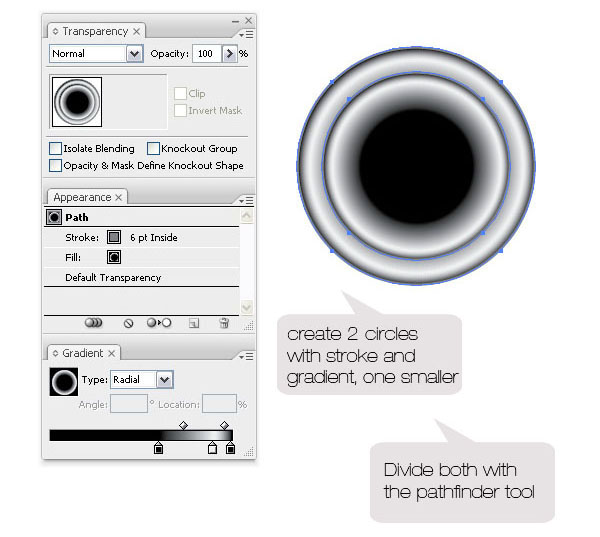 Delete the inner part with the Direct Selection Tool (A) and place the circle shape on top of the other.

Duplicate the first circle in Step 14 and scale it down a bit and place it on top. 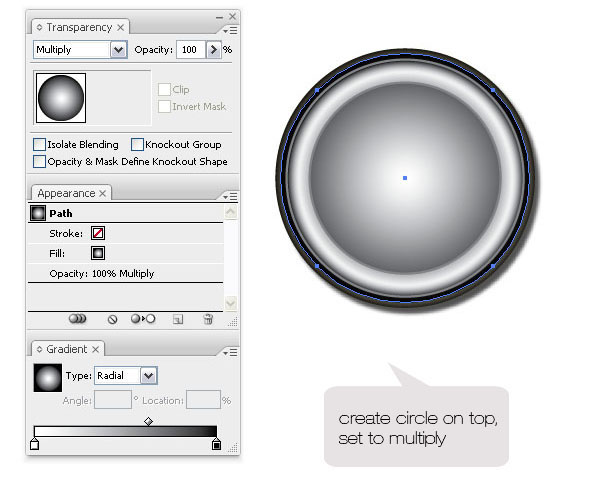 Create a small rectangle (M) and fill it with a black to white to black linear gradient. Apply rounded corners (Effect > Stylize > Rounded Corners) and a Drop Shadow. 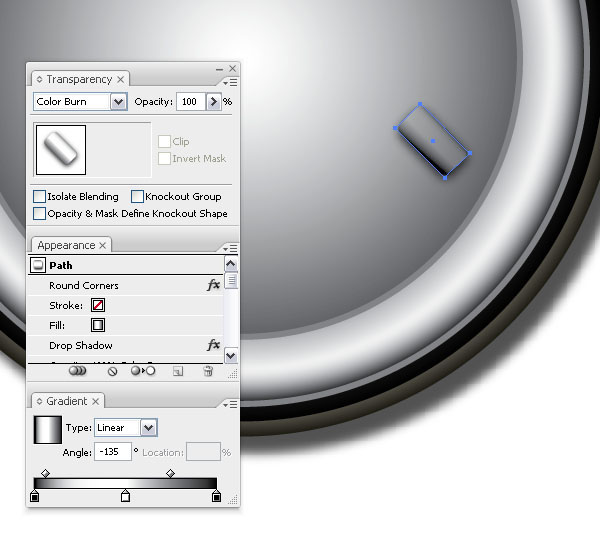 Repeat Step 18 and create another rectangle, but don't apply the rounded corners, just a Drop Shadow. 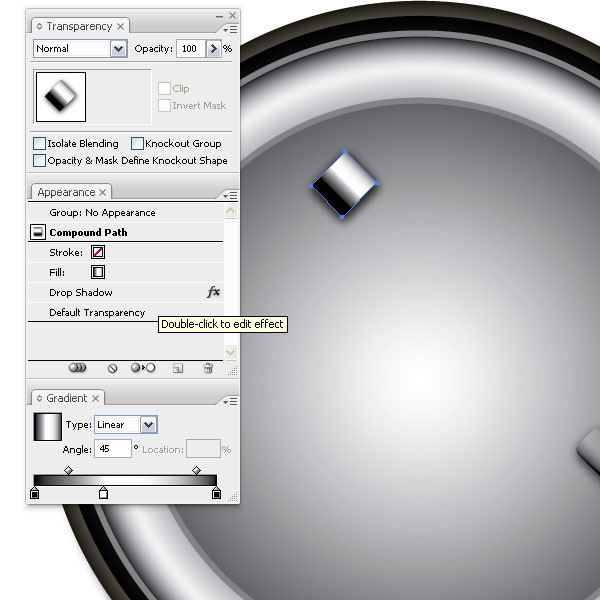 Next, create a needle shape with the Pen Tool (P) and fill it again with a linear gradient, then add a Drop Shadow. 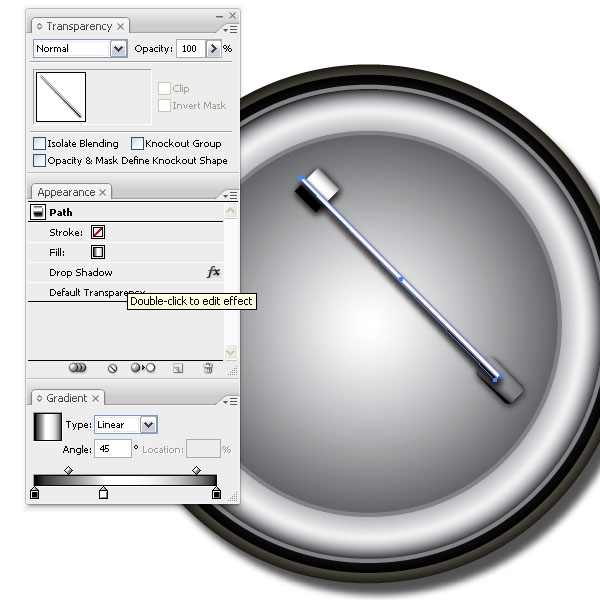 Create another rectangle, but cut out the middle, just like you see below. Also, add a Drop Shadow. 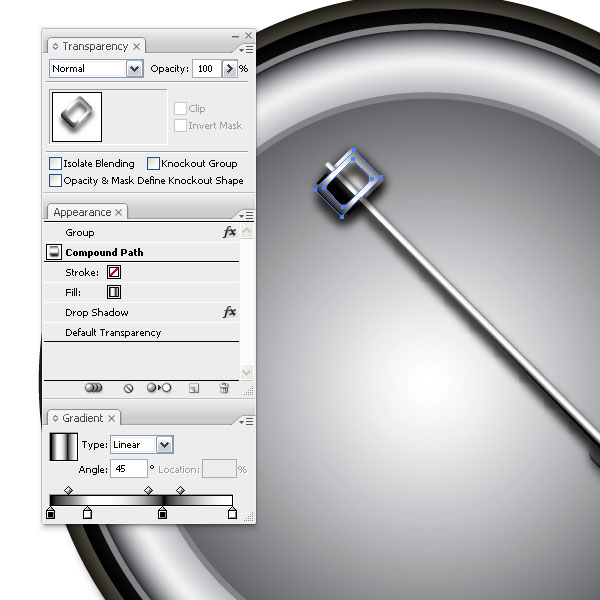 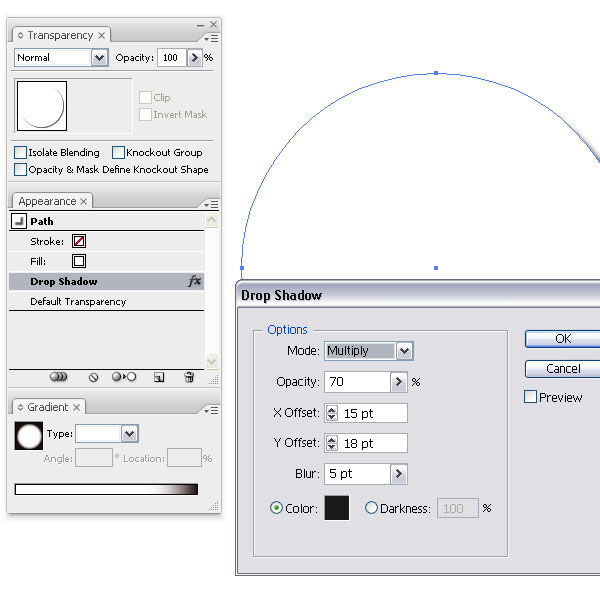 Create a sickle like shape by simply dividing two circles via the Pathfinder palette. Fill it with black and set the Layer Mode to Multiply.

Create another circle on top and fill it with a radial black to white gradient. Set the Layer Mode to Multiply.

Create two funky shapes, one in black and one in red, then overlap them.

Select both and apply the Pucker and Bloat effect (Effect > Distort & Transform > Pucker & Bloat). Apply the settings shown below.

This is what it should like with the effect applied to both shapes. 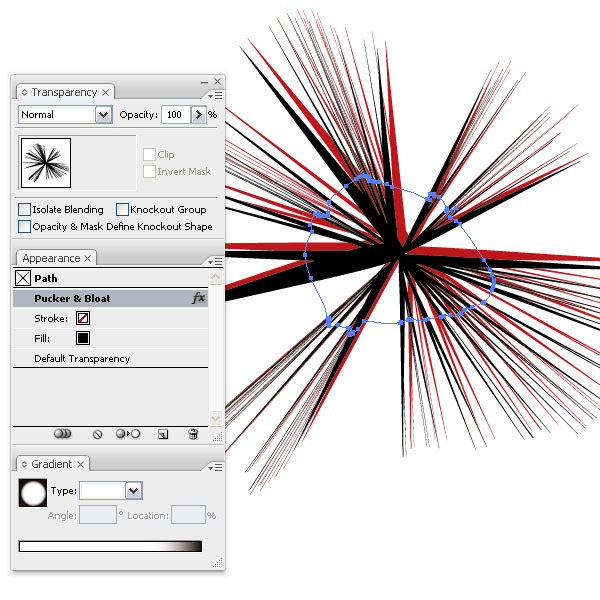 Make a copy of the circle for the pin button, remove all effects and fills, then place it on top of the puckered shapes. Select all and apply a Clipping Mask (Command + 7). 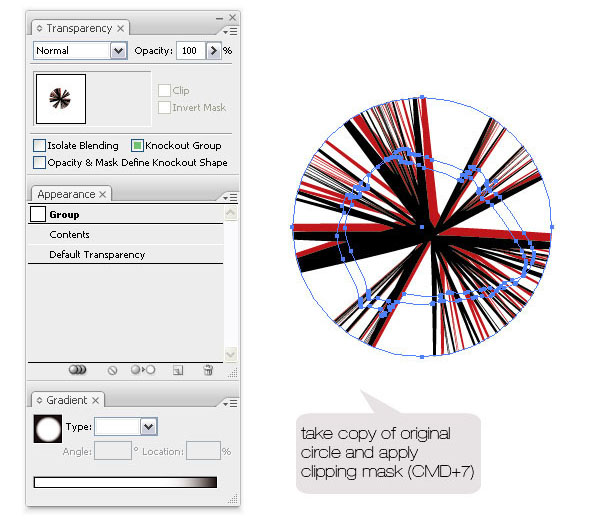 Place the clipped shape on top of the pin button. Then create a small circle filled with a very light gray to white radial gradient and set the Layer Mode to Overlay. 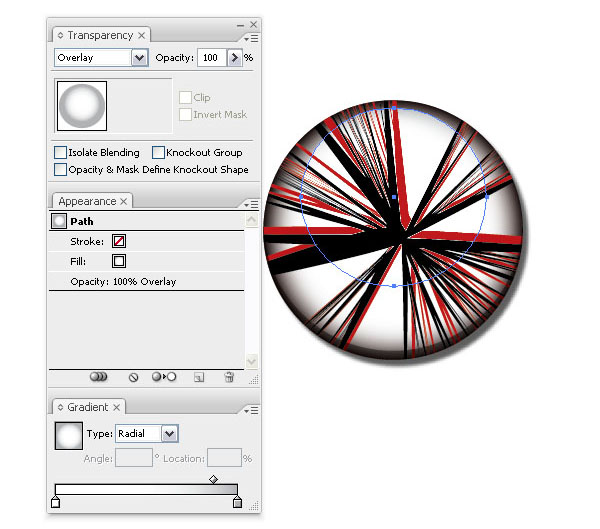 Take the face and group it (Command + G), then place it on top of the pin button and scale it down if necessary.

This is the final result. A stylized pin button with an illustrated face. Of course, you could use your own photo, or even a photo of yourself. Enjoy!

Simona Pfreundner
My name is Simona Pfreundner, and I’m an independent graphic designer based in Montreal, Canada. I am a very creative woman with a big love for illustration, speak three languages, and solve problems with visual solutions in a colorful way.
Weekly email summary