In this tutorial we will learn how to create vector fireworks using the Pixelate Effect and complex Art Brushes. Now we can decorate a night landscape or a greeting card with bright fireworks. Let's get started!

Take the Ellipse Tool (L) and create an ellipse. Using the Direct Selection Tool (A), make it look as shown in the figure below. Now fill it with a black to white linear gradient. 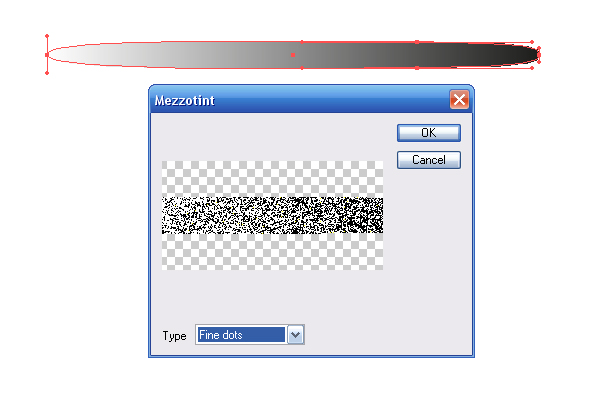 In order to achieve a higher density of points in the right part of the shape, replace the black color in the gradient with full black (C=100, M=100, Y=100 and K=100) and shift the right gradient slider slightly to the left. 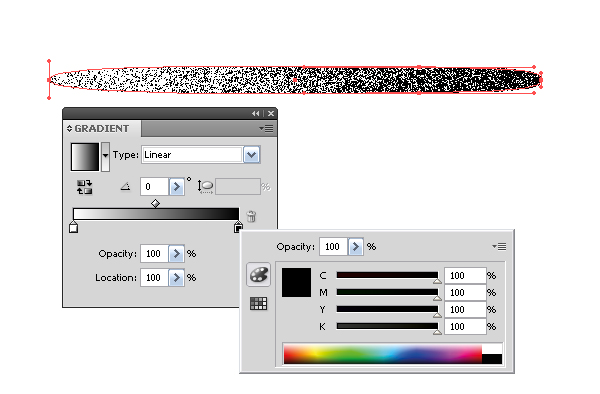 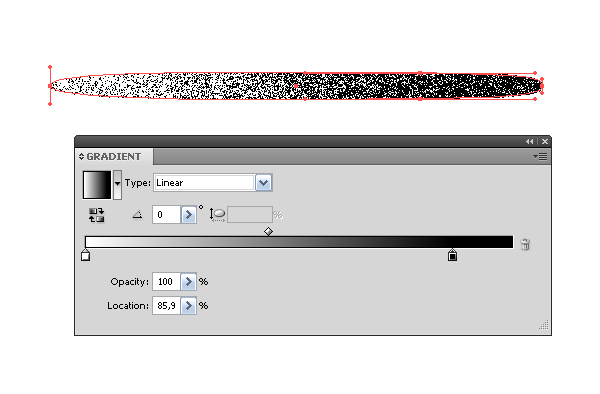 Now you are ready to trace, go to Object > Live Trace > Tracing Options ..., set the tracing settings shown in the picture below and click on the button Trace. 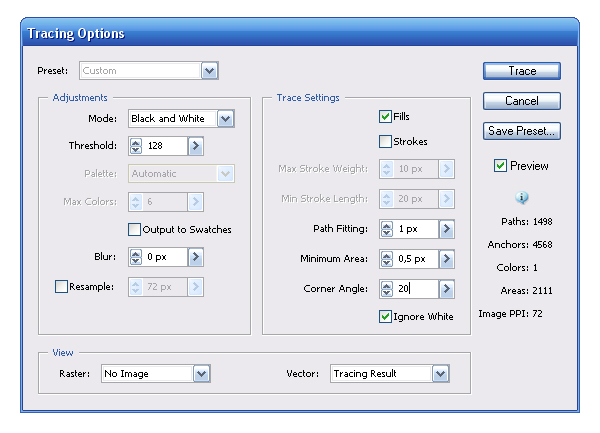 Tracing parameters depend on the size of the object and are selected approximately. It is easier to work with large objects, which can be reduced after tracing if necessary. Keep the object selected, go to Object > Expand.

Take the Rectangle Tool (M) and create a rectangle of black color, which will serve us as a blank background. Now move the object (the result of the tracing) on the background and replace the color of its fill with white or any other color that would be the color of your firework flash. The underlayer with a black rectangle should be located lower than the underlayer with the object (07). 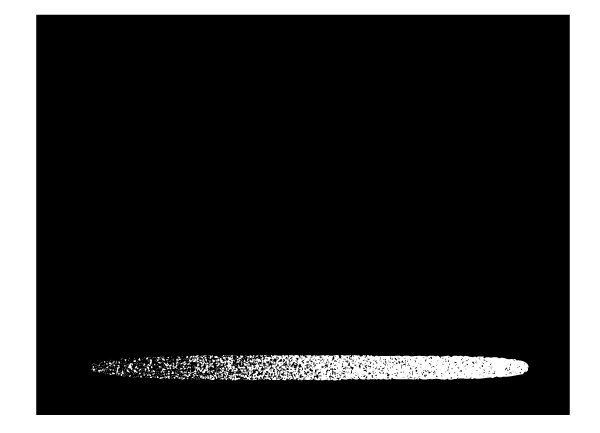 Create a few more objects of different shapes similar to this one. You can achieve a different distribution of points density by operating the slider of a linear gradient, as we did in step 3. 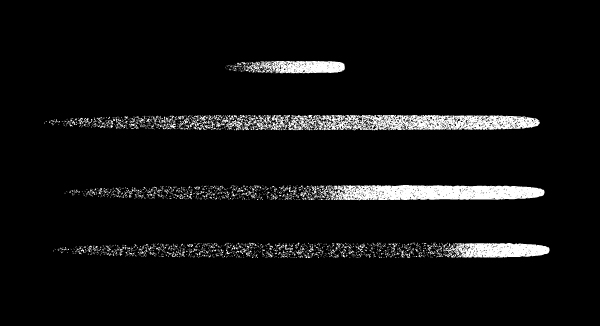 All the created objects will represent scattering lights of fireworks, so before the next step reduce them to the required size, so that your fireworks could fit on your screen without zooming out. I admit that it is not convenient to switch the scale all the time when working.

Select the created objects one by one and drag them to the Brushes palette, save each new brushes as Art Brush.

Take the Pen Tool (P) and create a further level of firework. It represents the rays diverging from a single point. Keep hitting the P button before the creation of a new ray, then the line will not continue. Now select the rays, and apply the different brushes to them. 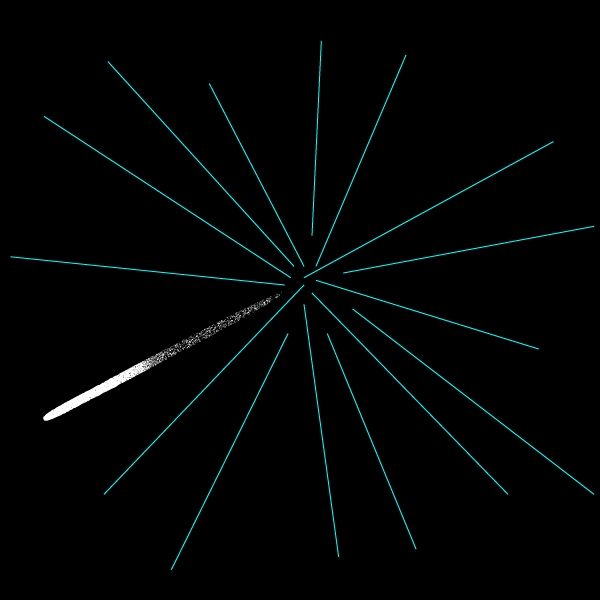 Replace the thickness of a few rays, setting the line width in the Stroke palette.

I guess you noticed that some firework lights fly off zigzag-like. Create some of these kinds of rays, but try not to overdo it, there can be 3-4 of them per firework, not more. Select the ray, and go to Effect > Distort & Transform > ZigZag... 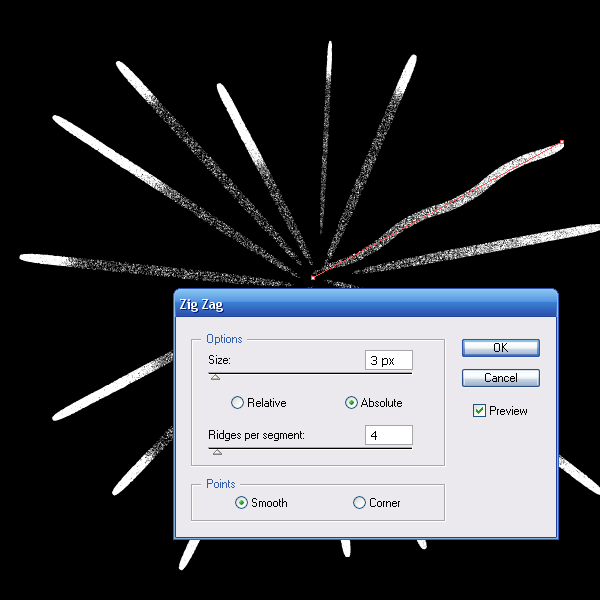 Since we are creating a further level of fireworks, some rays may not be the same brightness. Change their brightness by reducing the opacity in the Transparency palette. 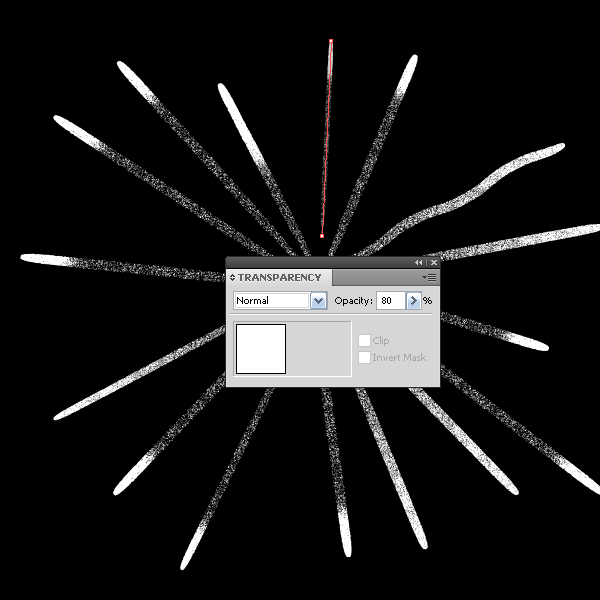 Some rays trails will disappear when approaching the center of the break. To do this effect, select the ray, and go to Object > Expand Appearance. Now fill the object with a linear gradient that goes from a basic color of the firework (it is white in my case) to the same color but with 0% Opacity 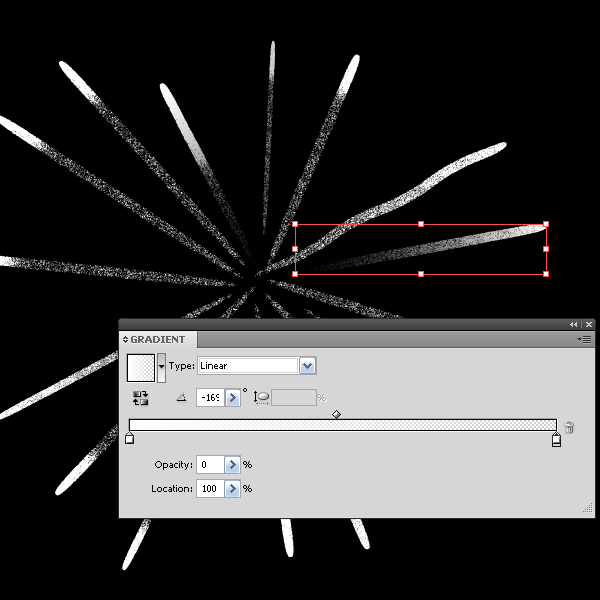 Select and group up all the elements of the first level (Command + G). Lock the group in the Layers palette. 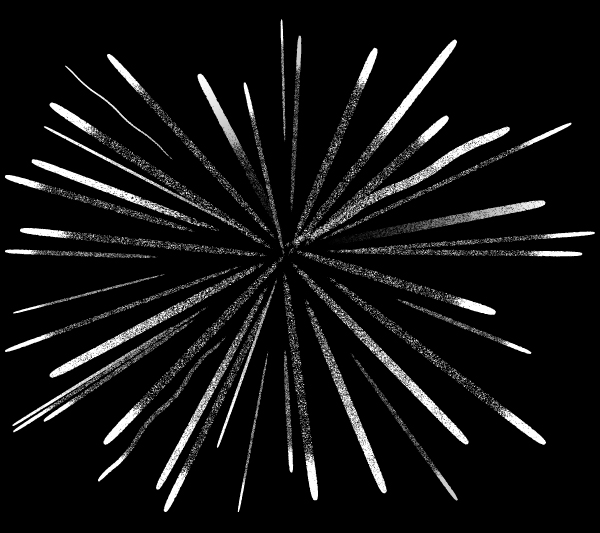 Now create a front level of the fireworks. Apply the techniques described above. Fill the rays with linear gradients that go from white to red. Just to let you know, the fill is possible after Object > Expand Appearance is done, and use the Gradient Tool (G) to control the direction of the gradient. Rays of this level are visibly shorter then the further ones. 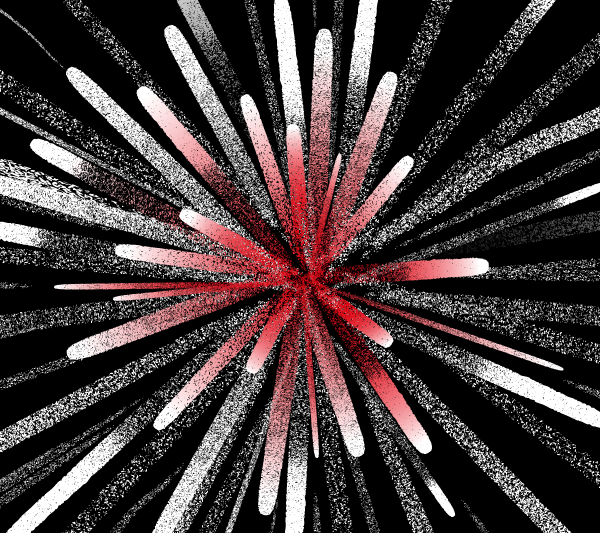 Now create another type of ray. Take the Ellipse Tool (L) and create a white ellipse.

Copy it and paste it in back (Command + C, Command + B), increase the sizes of the lower ellipse, while holding down Option + Shift. Now replace its fill with a red color.

Duplicate the red ellipse and increase its sizes. Set the Opacity of the ellipse equal to 0%. 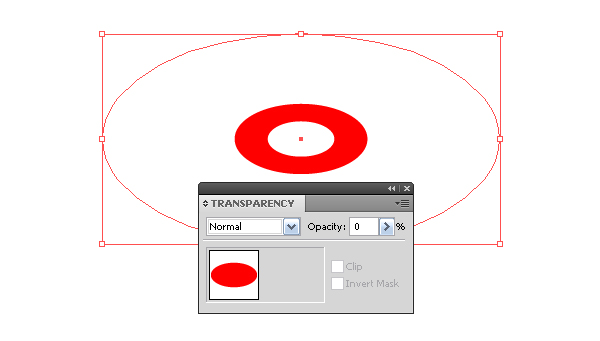 Select all the ellipses, and go to Object > Blend > Make... 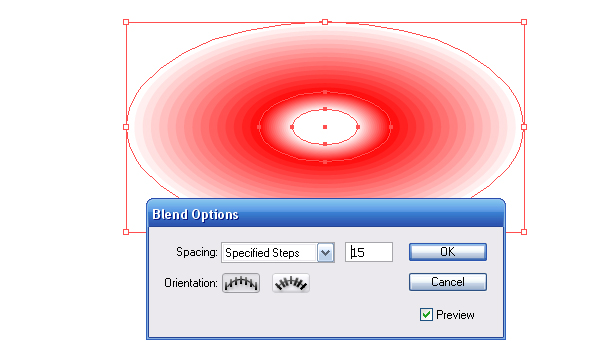 Select the smallest ellipse with the Direct Selection Tool (A) and shift it slightly to the left. 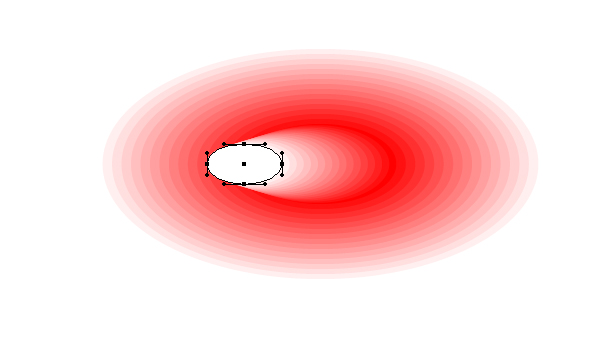 Now create shell trails. Build two rectangles of equal width and different heights. Both rectangles should have a red fill. The Opacity of the upper one is 50% and of the lower one is 0%.

Select both rectangles and go to Object > Blend > Make...

Combine the shell and its trail and align them horizontally using Align palette.

Group up all the elements of the shell and transfer it to the Brushes palette, save a new brush as an Art Brush.

Create a bunch of flying off shells using this brush. Apply the technique described in step 8. 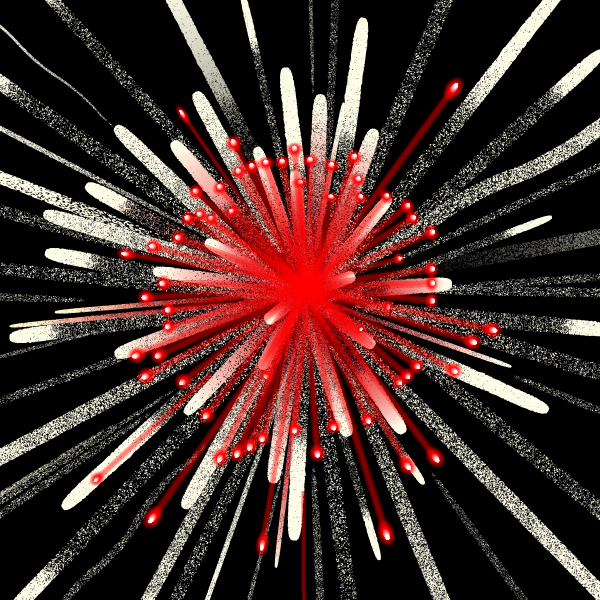 And finally, create another brush, using the element created in the steps 14 and 15. In the process of work, do not remove the elements from which the brushes were created, as you might need them. Take the Pen Tool (P) and set the point at a certain distance from the shell burst. Group up all the elements and save them as an Art Brush. 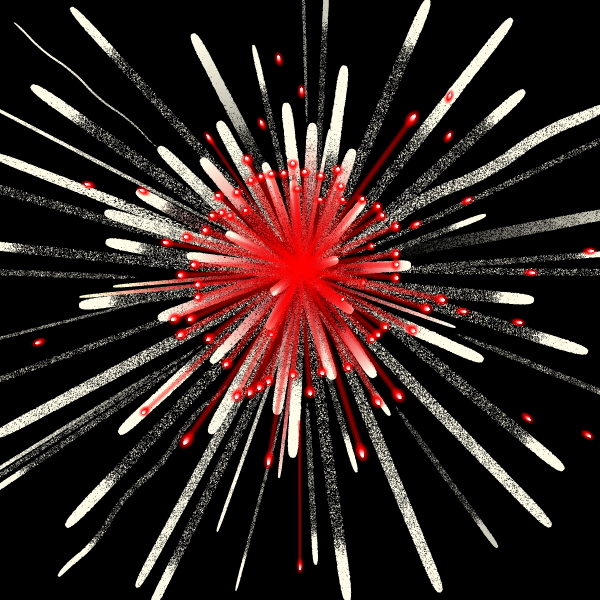 It's time to proceed to the background. Take the Mesh Tool (U) and create a simple grid. Paint the node located in the place of the flash in dark brown. 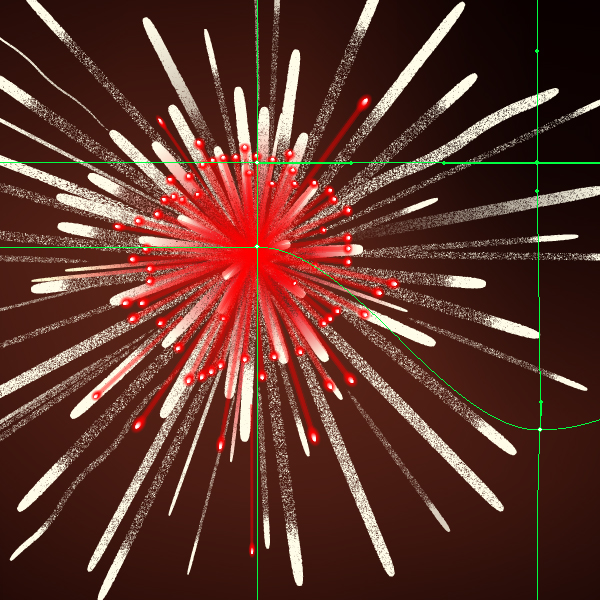 In order to work freely with the background, lock all the underlayers with elements of the fireworks in the Layers palette.

Create a circle and fill it with radial gradient, consisting of white, red and brown color.

Move the created shape in the Layers palette so that it is between the background and fireworks.

Create another flash of fireworks in the background in order to create a composition. Pick another color for the contrast, let it be not so bright as if the fireworks have just exploded.

The final image is below.

The file size depends on the degree of the brush details, and, consequently, on tracing parameters and the number of steps of the blend. If your source file is too large, or the computer is thinking too long during the work, keep that in mind. Using the technique of creating brushes described in this tutorial, you can create fireworks of all shapes and colors. I hope you've enjoyed this tut.

Dear friends, if you have any questions to ask, send them to my email (lazun@i.ua). I will give advice on any open vector graphics tutorial in Adobe Illustrator. You're also welcome to leave a comment below.