How to Create an Ice-cold Poster with 3D Text

In this tutorial, you'll learn how to combine stock images and 3D text into a cool poster. We'll use an icy theme for it and color it the way we want. You'll see it's not that hard to create a simple appealing poster with effective use of text and imagery.

For this tutorial I'll recreate the poster on a smaller canvas. Create a new photoshop document of 600px by 848px. To start off with the background get an interesting texture from cgtextures, I got mine here (Image 3). Import it and resize it.

In my case, after resizing, it did not cover all of the canvas. To make the texture cover a larger area, duplicate the layer (Right-click the layer and select Duplicate Layer...) and place it on top. To make those two layers blend into each other, use a soft brush and erase the bottom of the top layer. 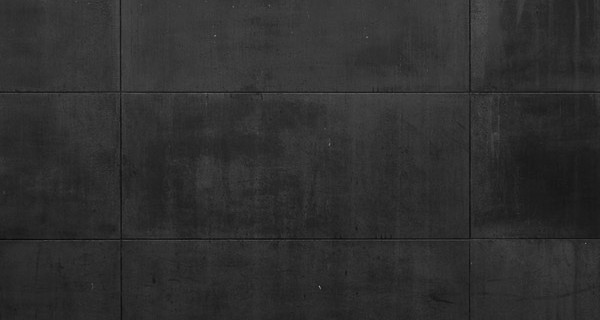 Create a new text layer with the text "ICE ICE ICE" in a white color (font: Century Gothic bold). Give it a huge font size (165pt) and place it so the letters are cut off by the edges. Set the Opacity of the layer to 13%.

Go into the Blending Options (Right-click the layer and select Blending Options...) and give it an Outer Glow. Choose a blue color and play with Size and Spread to change the size of the glow (my settings are a Spread of 22% and a Size of 19px). 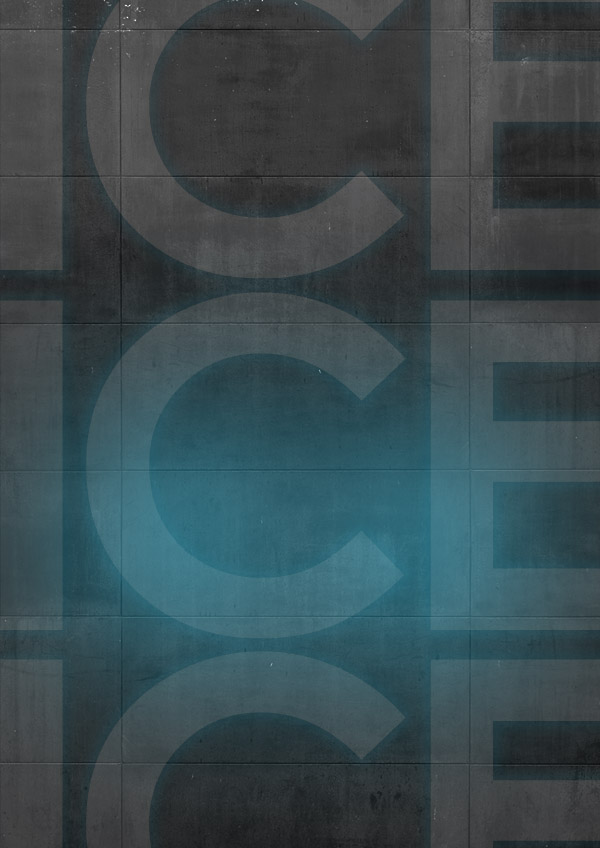 You can get the next two stock photos here and here. Import them on seperate layers. Transform the "clouds" stock until you find a nice angle. Desaturate it (Image > Adjustments > Desaturate) and set the layer to Hard Light at 50%. Use a mask to cut off the parts you do not want to show (Layer > Add Layer Mask > Hide All, use a soft white brush on the mask to reveal the clouds again). 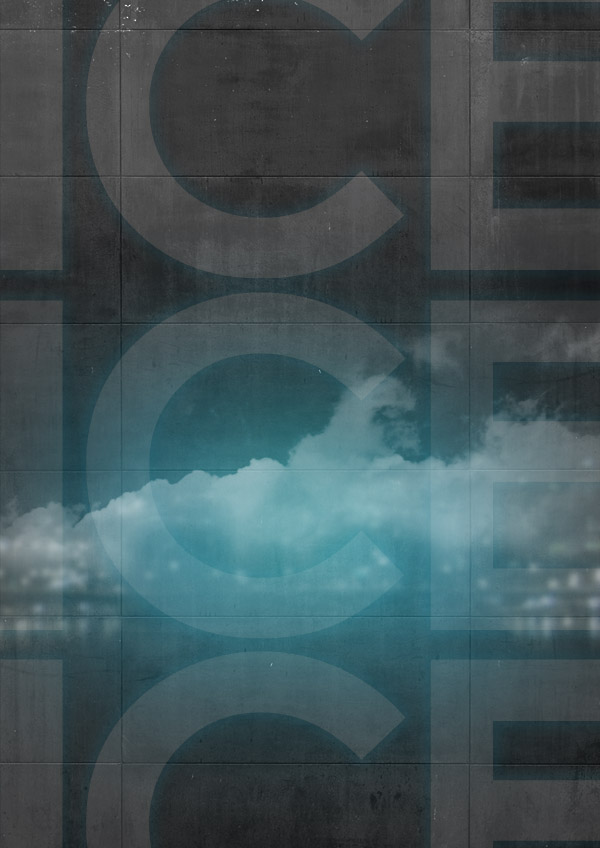 Place the "ice cubes" which you can find here, on the canvas. They need to be recolored so use Hue/Saturation to give them a blue color (Image > Adjustments > Hue/Saturation..., with Hue of 191, and Saturation of 32). Set this layer to Screen. 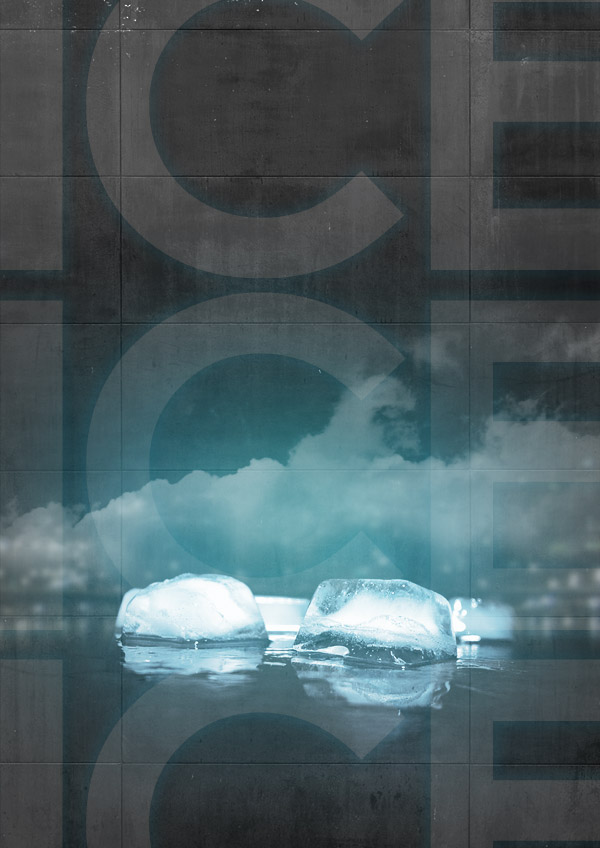 To create the big "ICE ICE" text you can use photoshop or a 3D program like Xara 3D which can be used to create 3D text easily. Whichever you are using, create the text in Century Gothic bold and lay over a texture like this one.

In Xara 3D you can do this in Options > Texture... Export it as a transparent PNG (you can change this in the export dialog box). If you are using Photoshop to create flat text, just import the texture on a new layer above the text. Hit Command + Alt + G so the texture will overlap the underlying layer.

Create a new layer above the text we just made. Hit Command + Alt + G so you can only work over the text. Take a soft white brush and brush over the letters. Set this layer's Opacity to 85%.

Create a new text layer with the text "baby." The font I used is Birdman, which you can get for free on dafont. Go into the Blending Options (Right-click the layer and selected Blending Options...) and give it a blue Outer Glow.

Between the ice text and the "ice cubes" create yet another text layer for the DJ's name. In the Blending Options you can give it a Gradient Overlay. Choose Radial as Style and use a black to white gradient. Change the Opacity to 30%.

Create a new layer on top. We'll create a box to display some details about the event. Make a rectangular selection in the left bottom corner. Use Apply Image (Image > Apply Image), this will fill the selection with whatever is displayed in it at the moment. Now blur the selection (Filter > Blur > Gaussian Blur..., at 4.3px).

Again create a new layer while keeping the selection active. Now use a very large soft brush with a blue color (#64b1d1) and click once on the top left corner. This should give you a blue gradient over the selection. Lower the Opacity of this layer to 40%.

Now create the text layer for the details. I like to vary font sizes and line-heights to create appealing text. Again I used Century Gothic and centered the text.

As a finishing touch we can lighten the up ice text even more. Create a new layer on top and take out a soft white brush. Click once on places where you'd like extra light. Set the layer's Opacity to 70%.

Create a Gradient Map (Layer > New Adjustment Layer > Gradient Map...) from dark blue (#061731) to a lighter orange (#f5d9a8). Set this adjustment layer to Darken at 65%. On this layer's mask use a black soft brush to brush over the ice ice baby text so it doesn't turn orange. 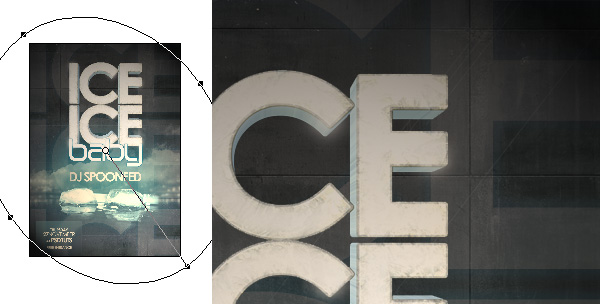 Set this last layer to Soft Light and lower the opacity a bit. You're all done! 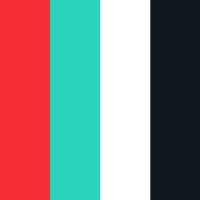 Ben Merckx
I am a Belgian multimedia designer who got interested in Photoshop a few years ago by reading and trying out tutorials on the web. At the moment I'm finishing my study of interactive multimedia design. I hope to share some Photoshop techniques in an interesting way.
Weekly email summary