How to Create an Envelope Icon in Photoshop

In this tutorial, you'll go through easy steps for creating a nice envelope icon. There's a light use of the Pen Tool in the tutorial, but most of it uses Selection Tools to create this icon. The stamp is also explained in a simple manner. I am sure you'll get familiar with some useful techniques as you go through!

Take a look at the icon we'll be creating.

Create a new 512 pixel by 512 pixel document with either a white or transparent background. Since the envelope is going to be white, it'd be helpful to fill the background (Alt + BackSpace) with a shade of gray (9D9D9D). Drag a horizontal and a vertical guide at the center of the canvas for convenience.

You need to press Command + R to reveal rulers bar (if it's hidden) from where you can grab guides.

Create a new layer set named "envelope." Select the Rectangular Marquee Tool (M) and on a new layer, fill a selection with white as shown. Name this layer as "body."

Double-click the new layer thumbnail in the layers palette and give it a Gradient Overlay. 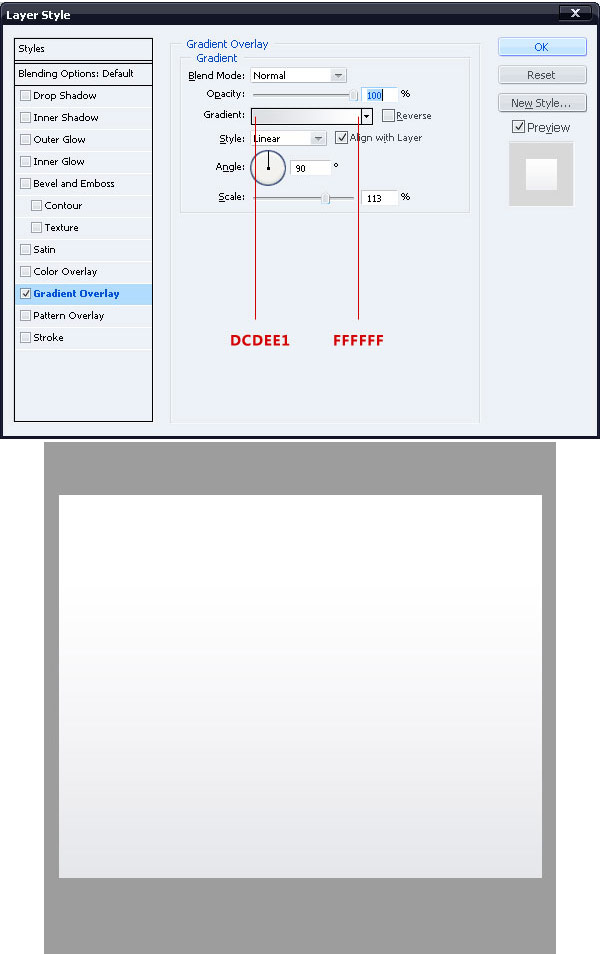 Create a new layer and name it "pattern." Using the Rectangular Marquee Tool, fill selections alternately with the colors: #6092BD and #E8414. Make sure that the distance between all the sections is the same. 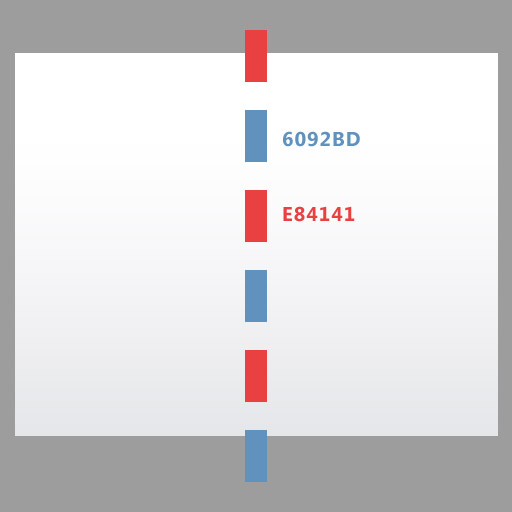 Create a new layer and name it "shade." Command-click on the "body" layer and stretch a black to white gradient as shown. Set the layer mode of the layer to Multiply and reduce its Opacity to 30%.

You now need to put a similar pattern and shade on the opposite side of the body. To do so, first duplicate the "pattern" layer (Command + J). With the duplicate layer selected, go to Edit > Transform > Flip Horizontal and move it exactly to the right edge of the body. Do the same for the "shade" layer.

Select Pen Tool and make a shape like one below. Name the shape layer as "lower." 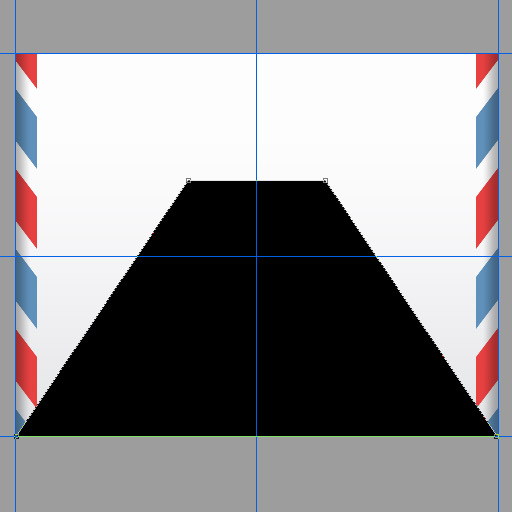 You can use further guides for exact alignment.

Give the "lower" layer the following layer styles.

Make a copy of the "pattern" layer (the one on left) and place the duplicate layer above the "lower" layer in the layers palette. Go to Edit > Transform > Rotate 90deg CCW. Move the pattern layer to the position shown.

Clear the extreme two incomplete sections of the pattern using the Eraser Tool (E). There's room for one complete section in the pattern below. Select the Polygonal Lasso Tool (L) and make a selection covering one of the blue parts of the pattern. Right-click on it and select "Layer via copy" from the menu. Move it rightward so that you get a desirable result.

Command-click on the "lower" layer, and on a new layer stretch a black to white gradient as you did in Step 6. The only difference is that this time, you stretch the gradient vertically up. After that, change the Blending Mode of the layer to Multiply and reduce its Opacity to 50%.

Create a new layer and place it under the "lower" layer in the layers palette. Command-click on the "lower" layer and fill the selection with black on the new layer. Press Command + T and increase its height to 102%. Now go to Filter > Blur > Gaussian Blur, type 0.7px and click OK. Reduce its Opacity to 40% and clear out its portion that flows outside the envelope's body.

Using the Pen Tool, make another shape like the one below and name it "upper." 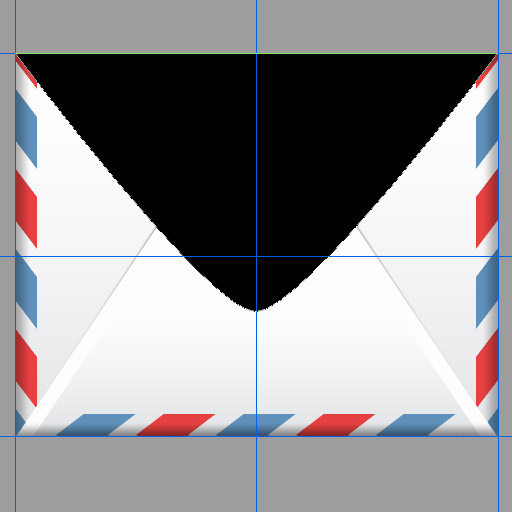 Give these layer styles to the "upper" layer.

Just like you added shade and shadow to the "lower" layer in Step 11 and Step 12, do the same for the "upper" layer. However, you should make these changes.

It's time to add a shadow at the bottom of the envelope. To do so, create a new layer and place it below all the layers constituting the envelope. Fill a rectangular selection with black on it. Apply Filter > Blur > Gaussian Blur and then Filter > Blur > Motion Blur. Finally, reduce the Opacity of the shadow to 75%.

The envelope is done. Now you can add a stamp to it. You can find a lot of them on the web, but if you want to make a custom stamp, then follow these steps.

Create a new 180 pixel by 180 pixel document with a white background. Select the Ellipse Tool (U) and make a circle of any color. Reduce the fill of the shape layer to 0% and give it a red stroke.

Duplicate the shape layer and reduce its size to half. 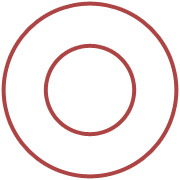 Click on "Vector mask thumbnail" of the smaller circle in the layers palette to reveal its path. Select the Type Tool (T) and move the cursor over the path. As the cursor changes, click and write whatever you want. If you want to increase the space between the text and the inner circle's stroke, simply increase the size of the text using Command + T. You need to make suitable adjustments in the Character window for a desirable outcome, mine are shown below. Finalize the stamp by adding your logo at the center.

When you're done with the stamp, hide the background layer (click the eye aside its name in the layers palette) and press Shift + Command + E to merge all visible layers. For a more realistic result, the stamp needs a bit more work.

Select the merged "stamp" layer, then go to Layer > Add Layer Mask > Reveal All. Now open this image and place it over the stamp (name the layer as "fade") so that it covers the stamp completely. Command-click on the "fade" layer and go to Select > Color Range, click OK after making the settings as shown below. By doing this, only the white part of the image will be selected.

Grab the finalized stamp and place it into the "envelope.psd" main document. Reduce its Opacity to 35%. 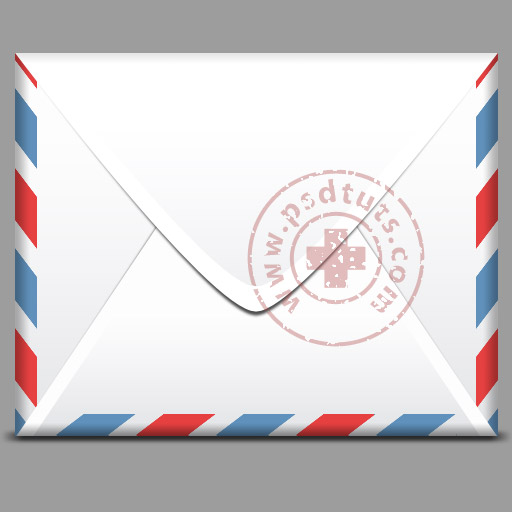 This step is optional, follow it for blending the stamp further with the envelope. With the "stamp" layer selected, Command-click the "upper" layer, then right-click anywhere on the canvas and select Layer Via Cut. This will cut the part of the stamp that's inside the selection and will split the single layer into two layers.

Move the remaining part of the "stamp" layer below the "upper" layer's shadow in the layers palette and reduce it's Opacity to 30%. Delete the background layer and save the file as PNG. 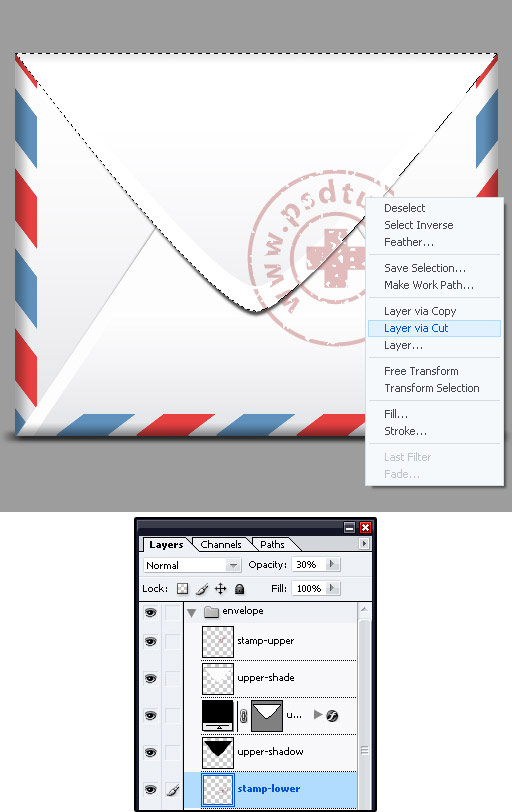 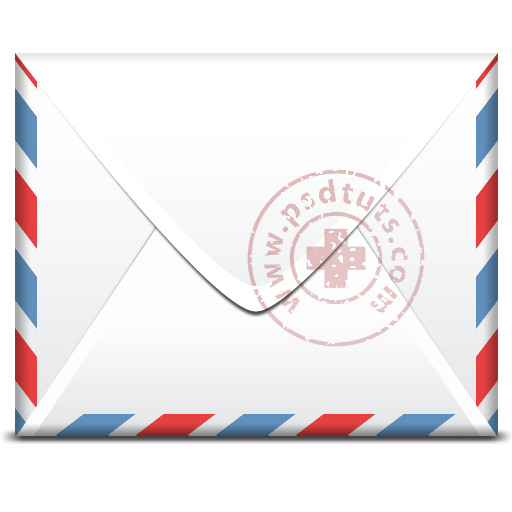 You can reduce the size of the final image, if you want smaller sizes. The icon keeps its meaning even if you resize it to 32px by 32px, that's 6.25% of the original size. However, for smaller versions like 24px by 24px or 16px by 16px, you will have to remake the icon specifically for those sizes.

Asher Abbasi
I am a student of Electrical Engineering living in a small town of Pakistan. I adore graphics and I spent most of my spare time exploring them. Illustration/drawing is my favorite type of work.
Weekly email summary