How To Create A Vector Wacom Tablet In Illustrator

In this tutorial, I show you how to create a vector Wacom tablet in Illustrator CS4 using some basic shapes, gradients, and effects. In order to follow this tutorial, you should have some prior experience with the Pen Tool and know how to manipulate preexisting points and curves.

If you don't know how to do this already, you may have a hard time following some of these steps. I strongly recommend you learn the Pen Tool (Illustrator's Pen Tool: The Comprehensive Guide is a good tutorial on that), inside and out, considering Illustrator practically revolves around it. Let's get started!

Open up a new project at least 600px by 500px. Using the Rectangle Tool (M), draw a rectangle that is 430px by 290px. Give the rectangle a vertical gradient using the colors indicated in the image below. Make sure that the lighter color is at the top. 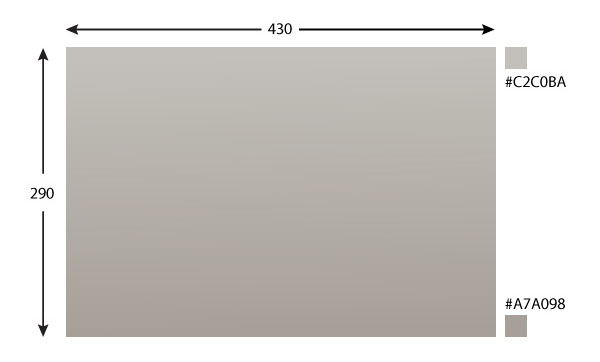 Next, add a point on both vertical sides of the rectangle, using the Pen Tool (P), about 50px from the bottom. Make sure the new points are vertically aligned. Then move the top-left and bottom-left points to the right 20px, and the top-right and bottom-right points to the left 20px. Your shape should look like the image below.

Now that we have our preliminary shape, we have to give it some sex-appeal by adding some curves. With the shape selected, go to Effects > Stylize > Round Corners. Give the effect a radius of 5px then click OK. Now go to Object > Expand Appearance. You should now have the same shape as before, but with rounded corners.

This is great for the top part of the image, but it's not exactly what we want the bottom to look like. To get the desired effect we want for the bottom, we are going to have to eyeball it. Adjust the four bottom corners with the Pen Tool (P) so they look like the image below. I chose to simplify the bottom corners by deleting some points I felt were unnecessary, then dragging out the bezier anchors to smooth out the corners.

Now lets add some depth. With the shape selected, go to Object > Path > Offset Path. Set the Offset to -5px then click OK. You should now have a second shape within your first shape. Now, color the new shape with another vertical gradient using the colors indicated in the image below. Again, make sure that the lighter color is at the top end of the gradient.

With the second shape selected, go to Object > Path > Offset Path giving the offset another -5px then click OK. This will give us our third shape which we can color with a gradient using the values below. In the Gradient Palette (Window > Gradient) select 'Radial' from the drop-down menu. Now use the Gradient Tool (G) to position the gradient slightly lower than center and expand the gradient so it falls off the shape a bit. Note that this time the gradient has the lighter color towards the bottom of the shape unlike the two shapes before it.

Now it's time to create the buttons. Draw a shape using the Rectangle Tool (M) with a size of 150px by 305px. Give it a vertical gradient using the colors indicated making sure the darker color is at the top. 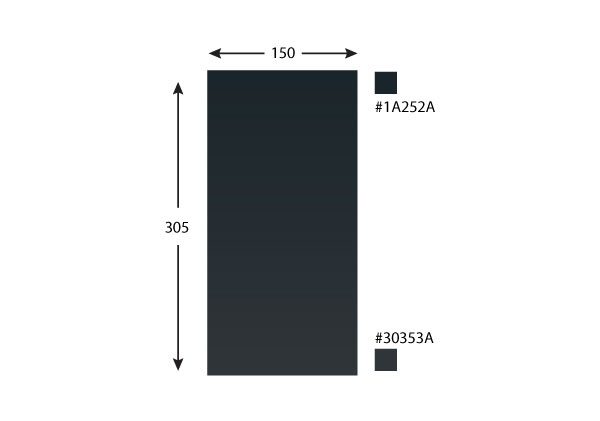 Within the new shape draw a series of rectangles with the sizes shown below. Make sure you leave a 5px gap between each new rectangle. Color each new rectangle with a horizontal gradient using the colors indicated. Instead of centering the new group of rectangles within the first rectangle, offset them to the left. I have left 10px from the top, right, and bottom edges, but only 5px from the left edge. This will help give the final image a sense of depth.

In order to add the small bevel, which two of the buttons have, we will add a rectangle with a height of 8px and a width equal to the buttons. Position the new rectangles at the top of the buttons. Color them with the lightest color shown in the image below.

As for the small dimple the middle button has – draw a circle using the Ellipse Tool (L) that is 15px by 15px. Center it within the button. Then give it a vertical gradient using the other two colors shown in the image below. Make sure the darker color is at the top of the gradient. 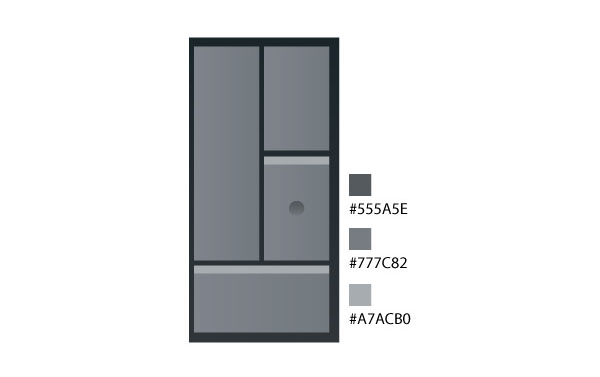 Beside the buttons is a touch panel used for either scrolling or zooming. In order to make this piece, we will start by making a rectangle with a width of 65px and a height of 305px. Position the newly created rectangle about 20px from the buttons panel. Give the new rectangle a vertical gradient with the colors indicated below. Again, make sure the darker color is at the top.

Next, create another (you guessed it) rectangle. This time with a width of 50px and a height of 290px. Position it 5px from the bottom-left and 10px from the top-right. Color it using a horizontal gradient with the colors shown below. Make sure the lighter color is on the left. 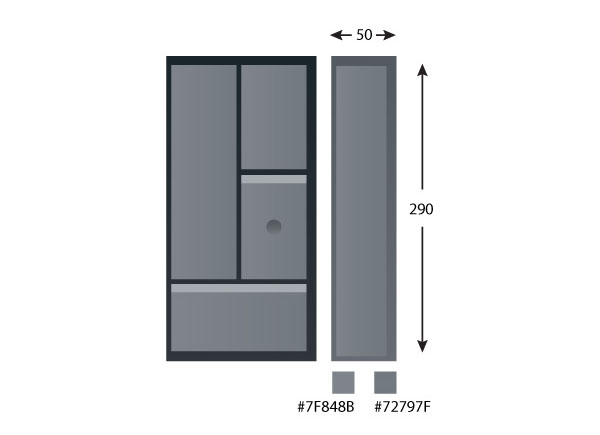 First, with both pieces of the touch panel selected, hold down Shift and drag it to the other side of the button assembly eyeballing its distance to match that of the original. Holding Shift ensures that the selection stays moving on a straight horizontal, vertical, or 45 degree path. Now do the same with the top three buttons of the button assembly switching the right two with the left one. Remember to hold Shift when moving them.

Now that the two sets of buttons are mirrored, we can shear them to match the angle of the tablet. With the left button assembly selected, go to Object > Transform > Shear. Set the Shear Angle to 5 then click OK. Repeat this step with the right button set selected, but this time give it a Shear Angle of -5. Your image should now look something like what I have below.

At this point we can now create the drawing surface of the tablet. With our trusty Rectangle Tool (M) selected, draw yet another rectangle. This time give it a width of 270px and a height of 175px. Color it with the color indicated below.

Now take the top-left point of the new rectangle and nudge it to the right 14px. Do the same to the top-right point, but to the left 14px. With the entire shape selected, go to Object > Path > Offset Path. Give the Offset a value of -2px then click OK. Nudge the new shape up 1px to give it depth and color it with the lighter gray shown below. With the outer shape selected, go to Effect > Stylize > Round Corners. Give it a Radius of 2px, then click OK.

Now lets add the drawing surface to the entire project. Center it horizontally and make sure the top is slightly higher than the buttons, 4px to be exact.

Next, we will be making the blue light at the top of the unit which indicates that it is receiving power. Start by creating a 10px wide by 4px high rectangle using the Rectangle Tool (M). Center it horizontally and move it to the top just above the drawing surface. Using the Gradient Palette (Window > Gradient), give the rectangle a Radial gradient with the three colors (shown below).

Now go to Effect > Stylize > Outer Glow. Set the Mode to Normal with a shade of blue somewhere between the two shades listed below. Set the Opacity to 100%, and the Blur to 5px, then click OK.

This step is what will bring the somewhat flat tablet to life. Start by selecting the back most object, Copy it (Command + C), then Past in Front (Command + F). Delete the top four points that make up the two top rounded corners, then give the top line of the new shape a slopping curve by using the Pen Tool (P).

Hint: The color stop on the left of the Gradient Slider is black with an Opacity of 0%. 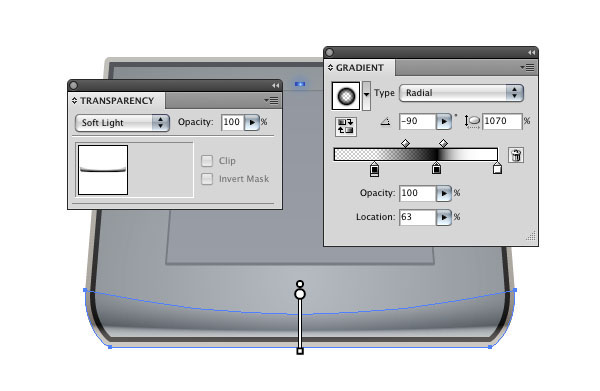 Now that we are done with the tablet itself, lets make the stylus. In the picture below you will see all the shapes that the stylus is made up of on the left and the gradients and how they are colored on the right. The shapes are all simple rectangles that have been created with the Rectangle Tool (M) and then manipulated either by nudging points to the left or to the right.

I then added some curves using the Pen Tool (P) to the tip, the back, and the grip. The only tricky part about the coloring you might not notice just from looking at the picture below is that the Radial gradient on the back end (top most piece) is not centered. It is positioned slightly higher than center and a bit to the right. This helps give it some extra depth and realism. 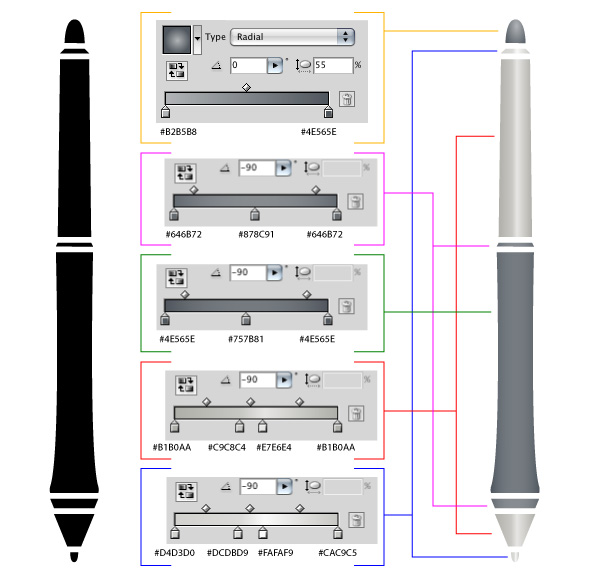 With the smaller shape selected, go to Object > Path > Offset Path. Set the Offset to -8 then click OK. Proceed to color the three new shapes as shown below. Once colored, horizontally center all three objects with the biggest at the back and the smallest at the front. Nudge the back shape down by 5px so you can see a bit of it coming out the bottom. 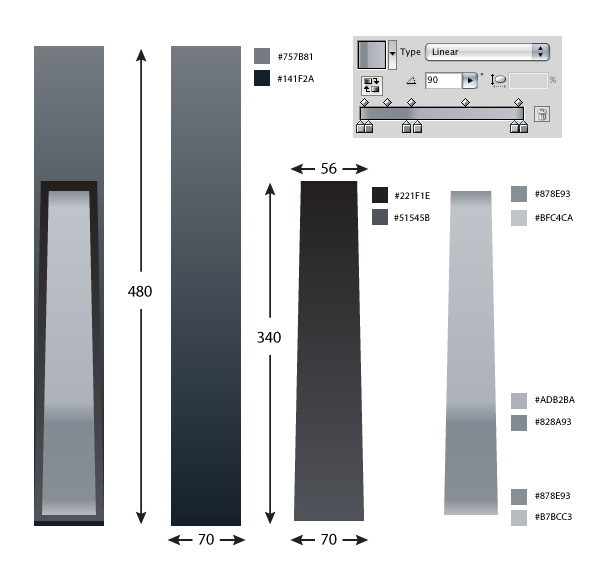 With the new group of shapes selected, use the Free Transform Tool (E) to resize it to fit in the center of the stylus. Position it in the area shown below. Your stylus should look like this now.

With the entire stylus selected, go to Object > Group. This will combine all the shapes into one group so we can add the drop shadow. Position the stylus were you want it on the tablet. Use the Free Transform Tool (E) to rotate it if desired. Then, with the "stylus" group selected, go to Effects > Stylize > Drop Shadow. Set the Opacity to 40%, both the X and Y Offset to 7px, and the Blur to 5px. Click OK.

There you have it - your very own Wacom style tablet. I hope this inspires all of you to see what else you can make using some simple shapes, a bit of pen tool work, and gradients. Have fun and enjoy! 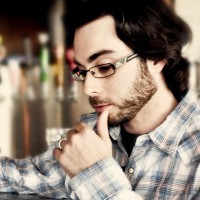 Joshua Bader
Joshua Bader is a graduate of Sheridan College’s Media Arts program with over a decade's experience in marketing media and digital design, often relying on Adobe Creative Suite (Photoshop, Illustrator, Flash, Dreamweaver, After Effects, etc.) and Final Cut Pro. Based in Toronto, he now runs his own Media Design firm (MRPwebmedia), specializing in web marketing initiatives and video production. Check out his portfolio at joshuabader.com.
Weekly email summary