How to Create a Three-dimensional Airplane with Adobe Illustrator

Start creating two projections of the airplane fuselage. In order to achieve a good result, I advise you to create complex shapes from simple ones by joining them together. Create an alignment chart. Take the Rectangle Tool (M) and create two rectangles.

Select both Rectangles and align them horizontally by clicking the corresponding button in the Align box.

Keep the Rectangle selected, click on the button "Add" from the Pathfinder box.

With the Pen Tool (P) add one anchor point on the left side of the shape, so that it could be located between points A and B. In order to put the point in the center of the AB line segment turn on the Smart Guides mode (Command + U) and then the guide will tell you the exact position the center of the line segment. Remove the points circled in blue in the second image below.

Select the leftmost point of the shape and convert points to smooth and move it horizontally to the left holding down the Shift key. Thus, we have created a horizontal projection of the fuselage tail section.

Using the same technique, create a horizontal projection of the nose.

Now create a horizontal projection of the plane wings. Choose a triangle as a source shape for transformation. Take the Polygon Tool and set the number of sides equal to three. Keeping the triangle selected go to Object > Transform > Rotate and set the angle value to - 30 degrees.

Transform the triangle into the wing shape, adding anchor points to the outline and deleting unnecessary ones. Guides symmetrically located to the center of the shapes will help us to do this. You can symmetrically move them using the Move command (Object > Transform > Move) 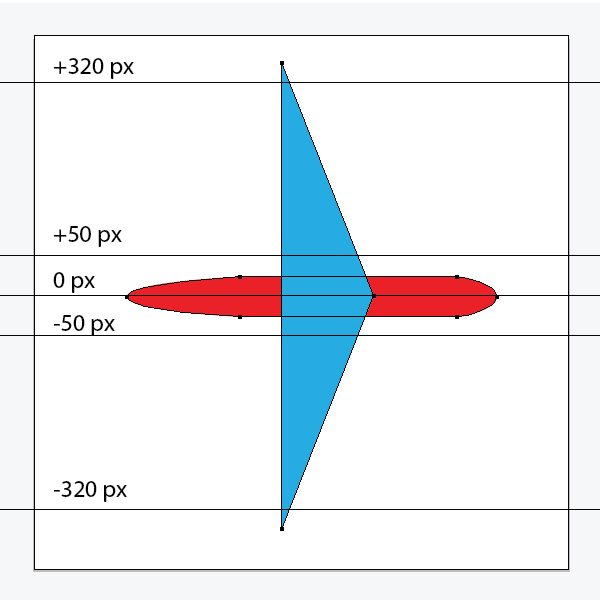 Now create a horizontal projection of Jet engines. With the Ellipse Tool (L) create an ellipse. Transform the ellipse using the Direct Selection Tool (A) into the shape shown in the figure below. 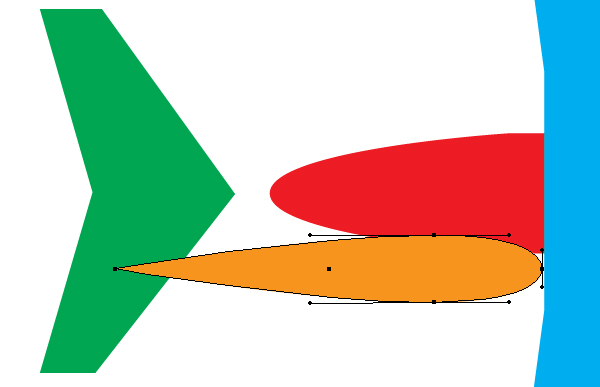 Create two vertical guides, select the shape and guides and click on the Divide from the Pathfinder box. 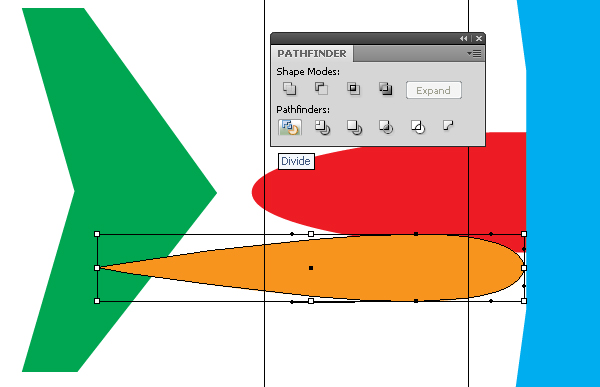 Place the second Jet engine on the other side.

Draw four circles, which we will need to make further build-ups. The diameter of these circles should coincide with the heights of the engine sides and the center should lie on their axis. See the image below for reference.

Now proceed to draw the horizontal projection build-up. Select the fuselage and holding down Shift + Alt drag it vertically down.

Transform the shape of the fuselage nose as shown in the figure below. The next turn is the rear fuselage.

It's now time for the 3D modeling. Select all the elements of the plane’s horizontal projection - except the circles - and group them. Keeping it selected go to Effect > 3D > Rotate using the settings as shown in the figure below. In fact, it is up to you how the plane will be located in space, so the settings may be different from mine, the point is to understand the build-up. 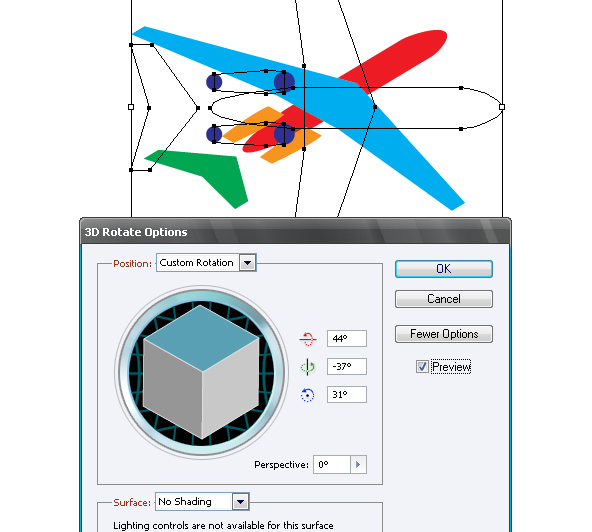 Keeping the shapes selected go to Object > Expand Appearance and then to Object > Clipping Mask > Release. As a result of this operation, we have one unnecessary Path, which will be deleted by selecting it in the layers palette. Now select the group of the plane in the horizontal projection and ungroup it twice. 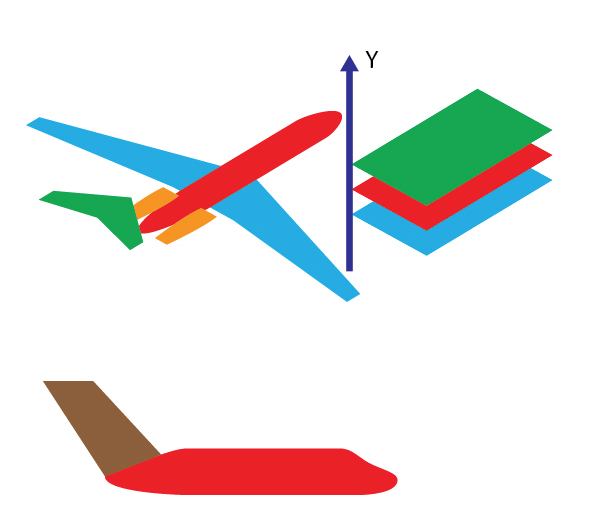 Now proceed to the circles, which represent the engine cross section. Select one of them and go to Effect > 3D > Rotate with the same settings as for the airplane horizontal projection. 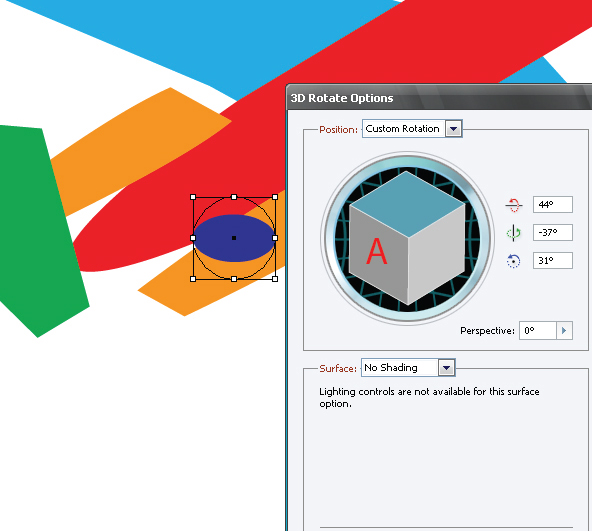 The engine cross section will lie in the plane which is perpendicular to the plane of the horizontal projection (marked as A in the figure), so we need to rotate the cube in the dialog box in order to put a circle into this plane. Keeping the circle selected will remove the Clipping Mask as in step 18. 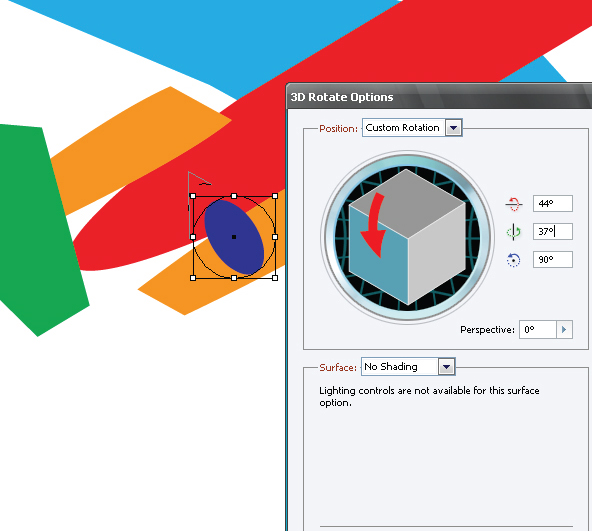 Now place the ellipse in the right place of the engine. Do the same with the other circles.

Proceed to the vertical airplane projection. Create a circle with a diameter of the fuselage height. We will need this circle to build up fuselage cross-sections.

Clip the bottom of the fuselage horizontal projection building up a rectangle the top side of which passes through the right-most point of the fuselage, and press the Minus Front from Pathfinder box. 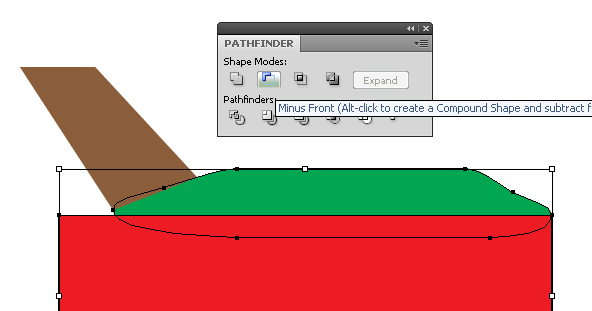 Now group the fuselage shape and tail and go to Effect > 3D > Rotate with the same settings you used for the horizontal projection.

Rotate the cube in the dialog box so that the projection could lie in the A plane. Repeat the steps mentioned in step 18.

Align the two projections of the airplane and build the fuselage cross-sections as in step 20.

The top point of the ellipse should lie on the top side of the vertical projection.

Edit the shape of the tail and nose of the airplane and the model is ready! This model will be used as a template, so we lock the layer, where the model was created and name it "TEMPLATE".

Create a new layer over the "TEMPLATE" layer. We will create the airplane based on the template shape. Take the Pen Tool (P) and separately outline the fuselage, wings, engines and tail of the airplane. 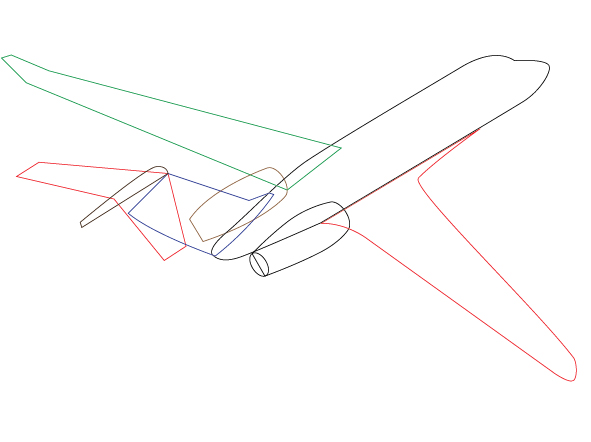 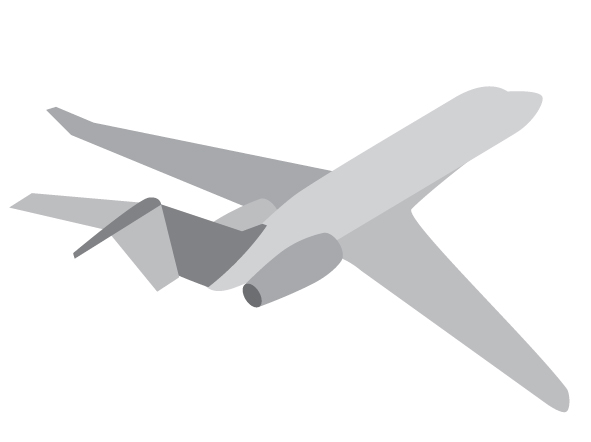 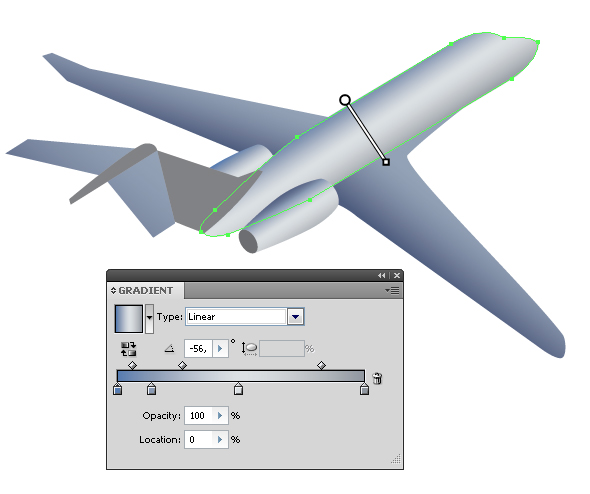 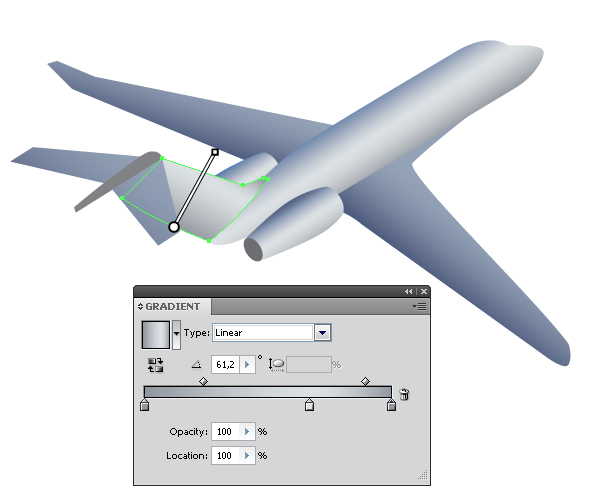 Proceed to more subtle work. We will create shadows and lights on the aircraft elements. Start with the fuselage nose. With the Pen Tool (P) create the shape shown in the figure below.

Copy and paste in front (Command + C then Command + F) the fuselage, select the copy and the shape and then click on Intersect in the Pathfinder palette.

Fill the resulting shape with a linear gradient from white to white color with the Opacity = 0%.

Using this technique, create lights and shadows on other elements of the aircraft. 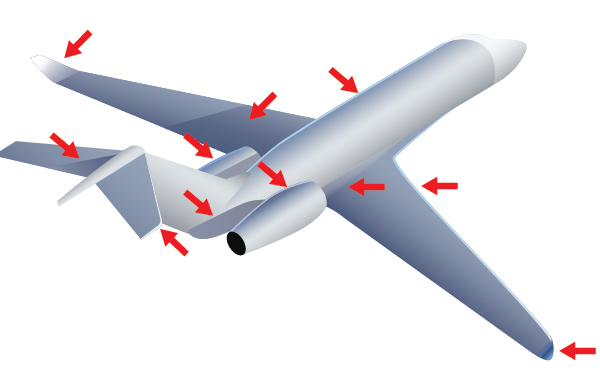 Start creating the windows. Take the Ellipse Tool (L) and create an ellipse, keeping it selected go to Object > Transform > Shear and set the value of the angle to 10 degrees.

Copy and paste the ellipse in front, drag a copy to the airplane nose. Scale the copy horizontally. 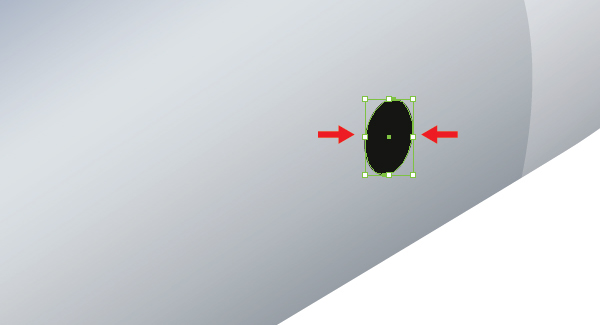 Create a door. Take the Rounded Rectangle Tool and create two shapes as shown in the figure below. Select both shapes and press the Minus Front button from the Pathfinder palette.

Place the door in place and go to Object > Envelope Distort > Make with Warp. 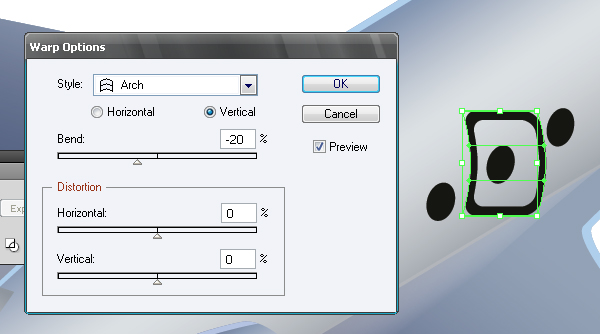 Keeping the door selected go to Object > Transform > Shear and set the value of the angle to - 30 degrees.

Create windows in the cabin. Take the Pen Tool (P) and create the shape shown in the figure below. Copy the fuselage shape and paste it in front, select the fuselage and the created shape, then press the Intersect button from the Pathfinder palette. 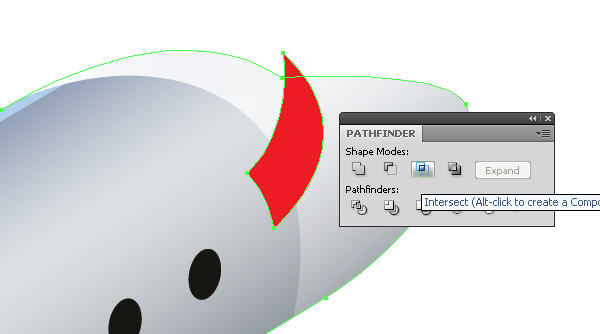 With the Pen Tool (P) create the shape shown in the figure below. Select the shape of the window and the created shape and press the Minus Front button from the Pathfinder palette. 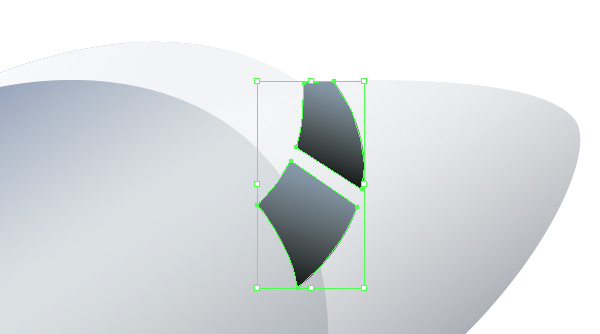 You will have to re-set the gradient fill after completing this operation. 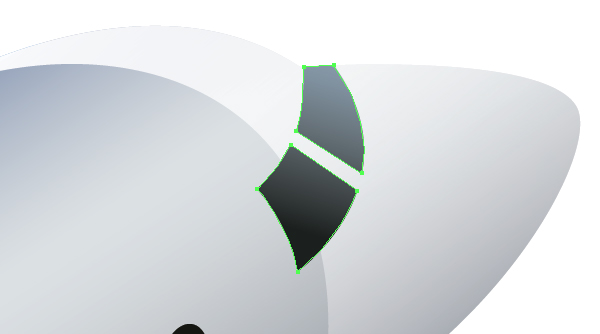 The plane is almost ready; a few small parts remain to be added so that it looks more realistic.

Create the fuselage reflection on the wing . Copy the door and windows, paste and move down the wing. 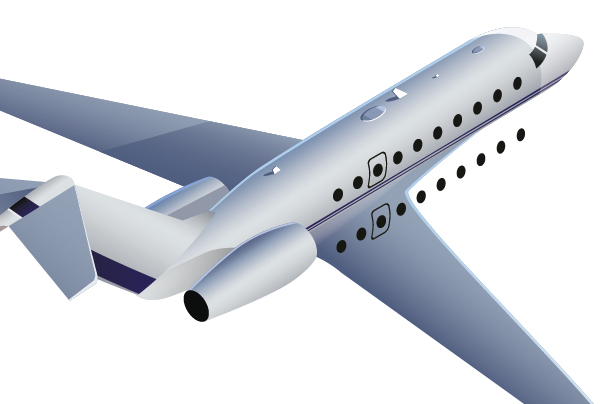 Keeping it selected go to Object > Envelope Distort > Make with Warp using the characteristics shown in the figure below. Now go to Object > Expand, ungroup and delete the unnecessary objects.

Create the fuselage reflection using the Pen Tool (P). Change the transparency of the reflection on the windows and fuselage.

You can choose any model you like and place it in space your way, the main thing is to learn from this tutorial is the construction principle. Once you know how to build a complex vector 3D object from a plan you can make almost anything!