How to Create a Stylish Pair of Headphones 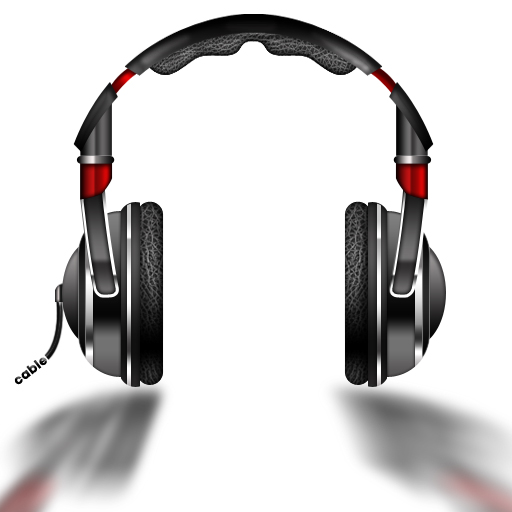 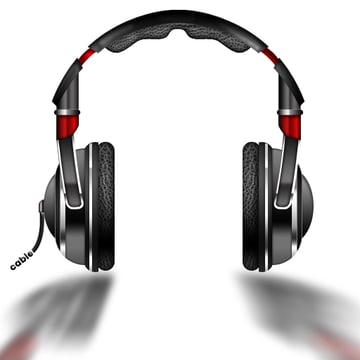 Let’s begin by opening a 512 px by 512 px document with a white or transparent background. We will start by creating the superior part of the headphones.
Ready? So.. open the Pen Tool to make a shape like the one shown below (1a). If you think it’s hard for you to make a good ellipse, activate Snap from the View Menu (Shift + Command + Semicolon key). Set up two guides to mark the center of the canvas, and create the shape like in (1b). 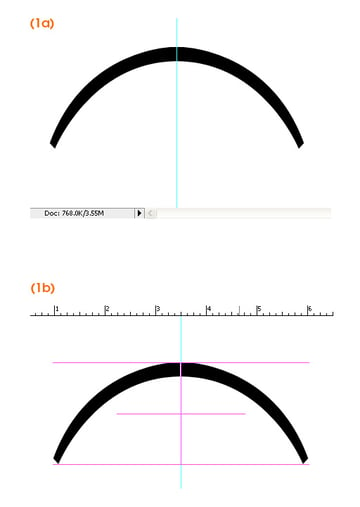 Grab the Polygonal Lasso Tool (L) from the toolbar, and cut on both sides parts of the shape like shown in (2a). Via–Layer Cut the 2 parts , resize them like in (2b), and name the layers : “resized-right” and “resized-left”. In the “headphones” main layer-group, place the two new layers in the back.

Now select the "head layer" and duble-click on it to bring up the Layer Style window. Like in (3a) add Satin and Gradient Overlay to add some shadows, and some Inner Shadow to create a concavity effect.

Then select the "resized right" layer and double-click to bring up the blending mode again . Add some shadows again; set the Inner shadow to give some concavity around the edges , and Gradient Overlay to give it a pipe-effect. (4a)

I recommend you deselect Use Global Light to any lightings you make, and try to imagine all the shadows. Most times, when you have small objects like the ones in (4a) , the Use Global Light option confuses the shadows for the other objects in a negative way.

After this, just copy all the effects from the "resized right" layer to "resized left" layer. (Drag the "Effects" holding ALT from one layer to the other)

To enhance the shadow effect on the "head" layer, select a Soft Mechanical Brush, 0% Hardness, 14px Master Diameter, and on a new layer named "head-overlay" (layer that has to be on top of "head" layer) draw some lines like in (5a). After that just select the Overlay option, and you got' yourself some nice shadows. (5b). 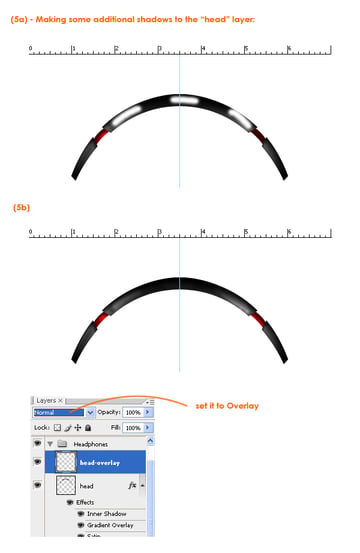 Create a new layer : "head-sponge", under the "head" layer. With Pen Tool make a shape like in (6a) and fill it with 50% grey. Bring the Blending Mode Window up again and set the following Options: (6b).

Let's add some leather texture on our sponge.

Download this image and place it on the document, naming it layer "texture".Scale it down proportionally until it's slightly bigger than you need it (7a). Command-click the "head-sponge" layer to select its pixels then add the selection as a mask to the texture (7b).

I hope you're still with me :) ....if yes, let's now make the actual headphones.

Because both ear-pieces aplly the same techniques, i will show you how i made one of them. Create first a folder under the first folder ("Headphones") and name it "right-earpiece". Start by drawing some shapes with Rounded Rectangle Tool and Ellipse Tool and cut them according to the following :

Adding effects! We will add Inner Glow to create the outer highlights, Inner Shadow to simulate highlights on the edges and various styles of Gradient to create a further 3Dimensional effect, and point out the shadows better :

I guess you got the point of how blending Options should be used to create some nice, realistic shadows. You apply the same techniques to the other shapes. Remember that the following are shown for you to see how the final image was done, but try to personalise the steps a bit so you can see the final differences ( this tutorial objective is for you to understand the simple ways of Blending Mode). Therefore: 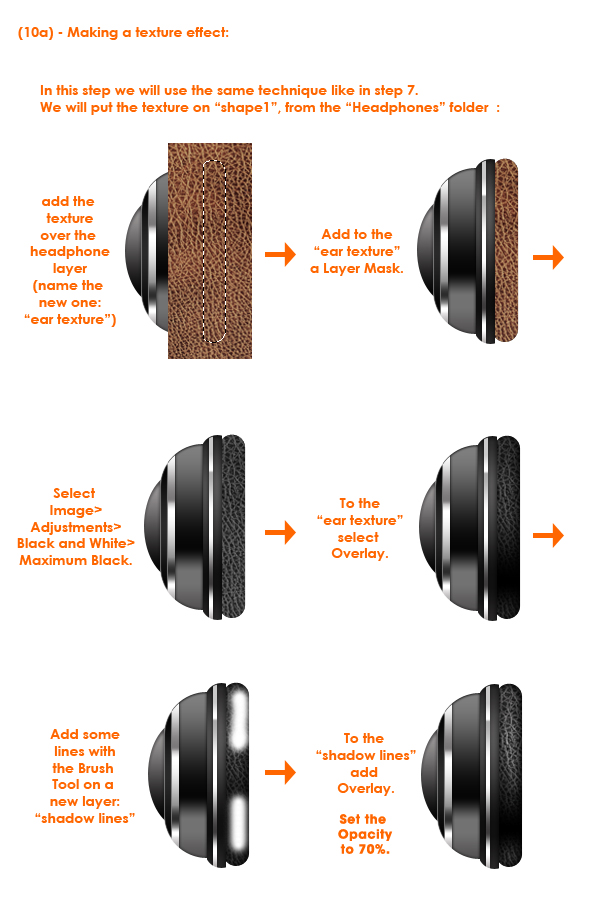 This is a separate Step just to point out that you just Duplicate the "Headphones" folder, and reverse it by clicking on the folder > Command + T > Flip Horizontal .

Soon it will be over ...Create a folder named "Handles". Begin by creating the following shapes (12a):

Now just like the earpieces, select the "Handles" folder, and duplicate it like shown in a previous step.Click on the folder > Command + T > Flip Horizontal .

All you have to do now is to joint all the layers you did until now.(15a)

We'll just add a final shadow just for the sake of presentation.

First select all the folders like in (16a) and press "Command + E": 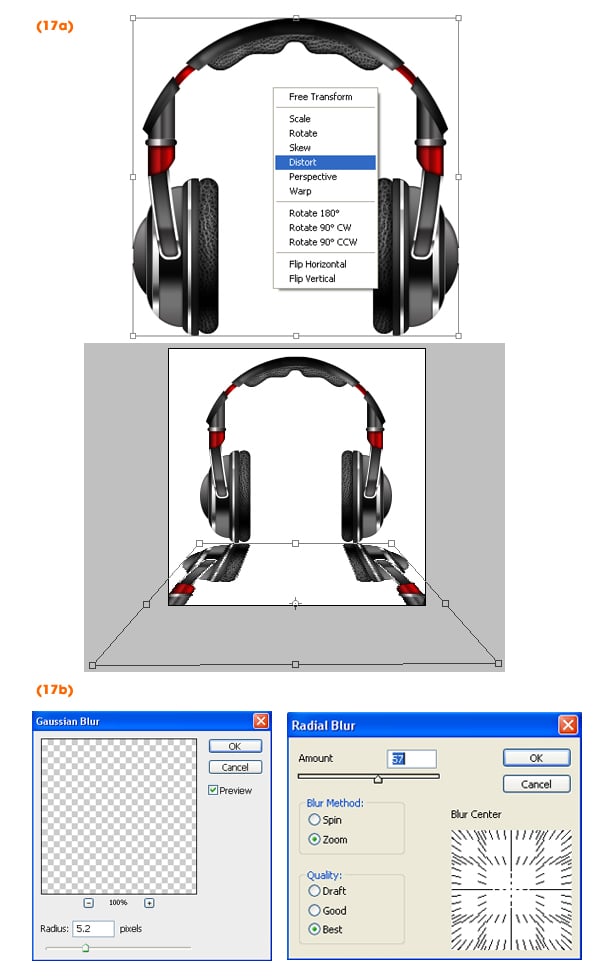 Now just add a cable for your headphones and that's all ....Finally ! :)

(I'll let you imagine the cable....being the same techniques, it's your turn now )

You can "pimp" your headphones with some golden texture or diamonds , or whatever. Hope you enjoy it, and also learned something from my tutorial!..... ( this is my very first ever tutorial... so be kind).

See ya in a future tutorial! Have fun!

Serban SM
My name is Serban SM , and I live in the great country of Romania. I like to call myself a graphic designer in my spare time. All that stands for "Advertising" is a hobby of mine, therefore I have a small website under this domain: www.w-studios.com.
Download Attachment