Do you know how to create particle effects in Photoshop? You can use this technique for many magical photo effects, in many different ways. In this tutorial, I'll show you how to create a sparkle overlay effect—a special texture that you can use to add a sparkle effect to any photo!

Save time by using a Photoshop Action from Envato Elements. To add this sparkle overlay effect to any photo, just brush over the selected areas and play the action—colorful sparkles will appear automatically!

First, create a New File. Use these dimensions:

Use the Rectangle Tool (U) to make the background three-colored—this will help us adjust the effect to every level of brightness.

Create a New Layer. Fill it with black using the Paint Bucket Tool (G). Then go to Filter > Noise > Add Noise. Use these settings.

Add a Curves adjustment layer (Layer > New Adjustment Layer > Curves). Drag both ends of the curve towards the “hill” in the background. Then click between these points and drag this new point down, to increase the contrast.

Go back to the noise layer and go to Filter > Blur > Gaussian Blur. Adjust the Radius to turn the noise into a starry sky.

Click the curves layer and press Control-Shift-Alt-E twice to create two merged versions of the whole image. Hide the layers below and one of the copies.

Go to the Channels tab, hold Control, and click any of the thumbnails. Then go back to the Layers tab, create a New Layer, and fill it with white. If you delete the lower layer now, you’ll see the black background has been removed. Name this layer “Big Sparkles”.

Duplicate Big Sparkles again and add Motion Blur to it. This time, make the smudge longer. Lower its Opacity to make the effect more natural.

Repeat the process once more, this time using an opposite angle. Don’t forget to lower the Opacity each time!

Select all the sparkles by holding Shift, and make a group out of them (Control-G). Name the group Big Sparkles. Add a Layer Mask to the group.

Go to Filter > Render > Clouds. This will add a little variety to the sparkles. To make it more visible, press Control-L and drag the right marker to the left.

Duplicate the group. Right-click it and select Merge Group, and then right-click the Layer Mask and select Apply Layer Mask. Go to Filter > Blur > Gaussian Blur and adjust the Radius to create a nice glow around the sparkles.

Let’s add some smaller sparkles now. Show the second merged layer you created at the beginning, make it twice as large, and remove its black background the same way we did before. Name this layer Small Sparkles.

Hold Alt and drag the Layer Mask of the Big Sparkles group to Small Sparkles. Then go to Filter > Blur > Lens Blur. The preview will not tell us much, but experiment with Brightness and Threshold and see how it works.

Duplicate this layer and make it four times larger. You may need to duplicate it once or twice to see the effect better.

All right, the sparkles are done, but they’re completely invisible on the light background. Let’s fix it by adding a black filled layer on the bottom. Add a Layer Mask to it and paint with a soft black brush in the middle. Then lower the Opacity to around 50%.

The sparkle overlay effect is done! Now simply hide the background to make it ready to use.

If you want to add this sparkle effect to a photo, just open your photo, go to File > Place, and select this file. Resize it to your needs. If you want to adjust something, just double-click the Smart Object and you’ll get a chance to edit everything once again.

To add this sparkle overlay effect to any photo, just brush over the selected areas and play the action—colorful sparkles will appear automatically!

Turn your photo into glitter with this action! You can convert the whole photo, or create a trendy Photoshop dispersion effect with it.

If you want to add a dust particle effect, with this action you only need to paint over the selected area and press play!

This professional Photoshop action will allow you to create stunning animated light effects from your photos with a lot of options to customise and improve them. You can save the result as a static image, a video for social media, or an animated GIF file. Create an animated sparkle effect in no time!

With this action, you can turn any line into sparkler art! Just draw your outlines over the photo and play the action.

Now you know how to create a sparkle overlay effect in Photoshop! You can modify this technique to create other photo effects as well—add snow, create bokeh, or add dust particles. Photoshop makes it all easy! 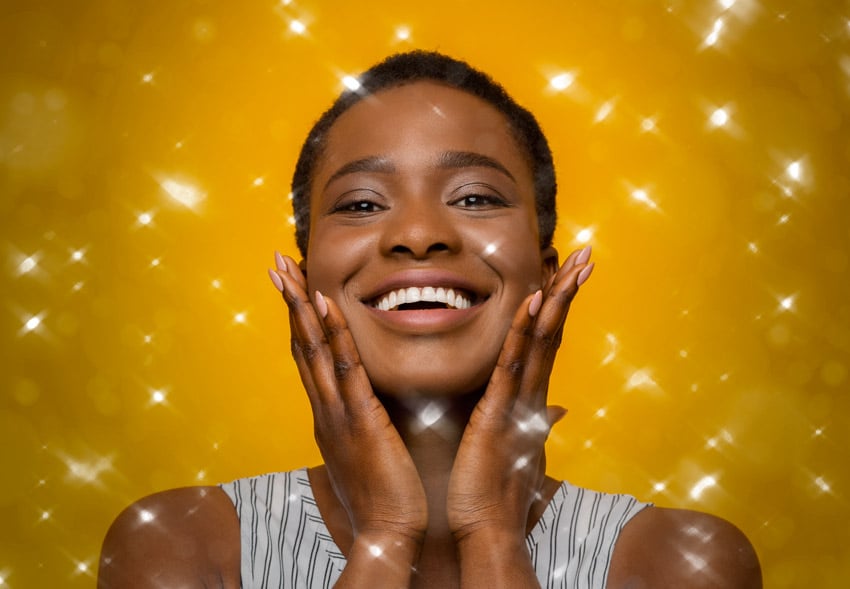 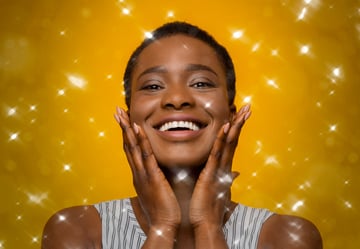 And if you need other types of sparkle photo effects, try one of these tutorials as well:

Monika Zagrobelna
Freelance artist, Poland
I'm a Polish artist with a great passion for creating new things—whether by drawing, digital painting, or photo-manipulation. I have 10+ years of experience in using Adobe Photoshop and Adobe Illustrator, both for graphic design and for creating unique artworks as well. I hold a degree in graphic design, but nowadays I work as a freelance illustrator and a tutorial author. I specialize in creating realistic art, especially of animals, and I'm good at designing imaginary creatures in a realistic way. I'm a big fan of dragons and feline creatures! Because I learn the best by teaching, and I love sharing my skills with others, in my free time I like to create educational posts on my own blog. I also share the behind-the-scenes of my artworks on my Instagram. I consider myself an unofficial ambassador of Sketchbook Pro, a seriously underrated program for digital art, which I use every day in my work. You can learn more about me on the Sketchbook Blog: https://www.sketchbook.com/blog/animals-creatures-by-monika-zagrobelna
mzagrobelna