How to Create a Retro Metal 3D Design

I originally developed this Vertigo logo and rendered a 3D version of it using Cinema 4D. However, for this tutorial I really wanted to find a way to get hot 3D text without using a 3D dedicated program.

The new version is reasonably convincing and is surprisingly easy to reproduce. I was able to recreated the 3D logo using only four layers and layer styles applied to each layer. Here are some of the things I will cover in this tutorial:

First, I added a stroke to the logo so that the extra outline will serve as a bevel to my 3D text once I've kicked into the project.

I changed the logo fill and stroke to white. I've found that when I apply Extrude and Bevel, white is the best choice to get crisp whites and blacks in the 3D text.

I adjusted the settings for the Extrude and Bevel. I clicked on options to get more settings and adjust the Light Intensity and Ambient Light to get my bright whites and dark blacks. The position of the light on your text is the key to removing the gray areas.

The results of the 3D extrusion in Illustrator are now copied and pasted onto a pink background in Photoshop. I ran into a glitch area in the 3D extrusion that caused me to have to fill in the area on the V.

I choose Select/Color Range to choose just my white areas.

I copied that layer and selected the inverse. I deleted the inverse so that only my white areas are on a layer by themselves. I still have a copy of the logo on it's original pasted layer, as I'll need that later in the tut.

I copied the layer that has my white logo on it and made a selection of everything on the layer. Then, I contracted the selection by 10 pixels or so and deleted the inverse.

I chose Edit/Fill and filled my layer with a 50% gray so that I can see the difference between my two layers.

The outside white that is on it's own layer will serve as the outer bevel. The gray area that is on a layer above will be the face of my 3D text that will contain the majority of my reflections.

I added a Gradient Overlay by clicking the FX button at the bottom of my layers panel.

I chose these colors for the moment. I'm sure I will tweak them later. That's part of the beauty of the layer styles, it will be very easy to update at any moment.

I added a Satin layer style to my logo and set it to Color Burn.

I added an Inner Shadow and set it to Overlay.

I chose an eraser brush with a hard edge and large enough so that when I erased it would give me a nice arch the width of my text.

The results of my erasing created a nice arch cut out that will serve as my reflection's horizon.

Next, I went back in and adjusted the Gradient Overlay colors for that layer. I faded from a dark brown, into a yellow, and then white. The contrast is key because that is what helps your image to really POP!

Next I went back into the main face of the logo and readjusted that Gradient Overlay to feel more like a skyline.

I right-clicked on my Layer Styles and Copied them.

I pasted the Layer Styles from the main logo face onto my outer white layer that is to serve as the bevel on the 3D text.

I adjusted the colors of the Gradient Overlay I just pasted. By adding a bright white to it. I now have a shiny bevel that really POPS!

I adjusted the Gradient Overlay colors to be very dark in the middle so that I'd loose some detail back there.

For some added detail, I made a selection near some key corners and will airbrush some darks to create the edges of my text.

The image below shows the results of darkening some of those edges.

Below is the full shot of my 3D logo having used only four layers with layer styles and one layer of airbrushed edges for detail.

I chose a feathered airbrush and added some white light over spill from the bright white areas of the reflections.

I filled a black circle on it's own layer and added an FX Layer Mode of Outer Glow set to purple.

I chose a very large feather brush and added some blue in the center of my black circle. This added depth as well as some color interest happening behind the Vertigo logo.

I wanted to experiment with the Outer Glow on it's own layer so I right-clicked the layer style and choose "Create Layer."

I created a new layer with a black circle and applied an inner glow. I duplicated that layer and placed it symmetrically on the other side of my logo.

The results so far!

In Illustrator I drew two lines and made a Blend between them.

I specified the number of steps by double clicking the Blend tool in my tool bar.

I made another blend of lines using the same steps and created a grid.

I applied a 3D rotation to my grid but no extrusion.

I copied and pasted my grid into Photoshop and will scale it a bit more to fit my composition better.

The result of my scaled grid.

I applied a layer style of Gradient Overlay to my grid using purple and black.

I created a new layer above all my layers and filled it with black. Then I went to Filter > Render > Lens Flare to create a new lens flare on my black layer.

I set the layer mode to Add and positioned the lens flare as a light source peaking from behind my larger planet and logo.

Next I copied my layer that contains the lens flare and applied a gaussian blur to soften it. This allowed my layer mode of Add to create some cool lighting effects. Last I adjusted the Hue & Saturation of the blurred lens flare.

Back in Illustrator, I created two circles and applied a Blend to them the same way I did for the lines that made up my grid earlier.

I drew a circle and deleted three quarters of the circle leaving a partial arc. Then I replaced the spline of my blend with the arc.

The blend now looks like this after replacing the spline.

I copied and pasted the blend of circles into Photoshop and erased parts of them to fade out in my composition.

I applied a layer style of Gradient Overlay to my circle blended layer.

I copied and pasted my lighting layers and circle blended layer and flipped horizontally to get a symmetrical composition. I suppose you could stop at this point and have a slick looking image as is, but I wanted to experiment with some textures to really give it a retro-grit feel.

Part V - Adding a Retro-Grit to Your Image

These next steps are not for the faint at heart. They require the bravery to try something a bit different with your artwork that is arguably finished and looks great. Some will love this effect and others will choose to be done. I like to refer to it as adding a retro-grit effect to your artwork.

I created a layer of solid 50% gray and set it to soft light. You will not see any results until you try the next step.

I added colored noise to this layer.

Because I have already set my layer to soft light, I can watch the results of my noise as I try to decide how much to add.

I used a texture of marble. You can choose different textures for this effect: concrete or old paper are great to try as well. Set it to multiply.

I copied my layer of textured marble. Inverted the colors (Command + I). Then set this layer to Screen or Lighten. I adjusted the levels. This has given me some worn out lighter areas across my artwork. Mixed with my other layer of multiplied textured. I've added a nice worn out retro feel to my artwork. You may need to add a layer of tan and set to multiply if your texture is not already a shade of tan the way my marble texture was.

I hope you are stoked about your Retro Metal 3D text you've created using only a little bit of help from Illustrator (I covered the powerful Blend Tool and 3D Extrusion Tool) and the rest pure Photoshop magic! Layer styles truly are amazing. I used them for pretty much every step of this piece!
Don't forget as well, these are all fundamental features of the Adobe suite that will open up your design options to a whole new dimension. Thanks to the Editor and Staff of PSDTUTS for giving me the opportunity to present this tutorial. 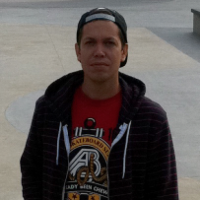 Barton Damer
I am a digital artist and motion designer that loves using Photoshop, Illustrator, After Effects and Cinema 4d to create commercial artwork. I freelance under the brand, AlreadyBeenChewed.tv where the emphasis is on creating fresh media.
Weekly email summary