How to Create a Rainy Window Vector Background

Using the Symbolism Tools, plus a bit of Gradient Mesh, learn to make a realistic window covered with raindrops. This is an advanced tutorial that assumes a fair amount of Illustrator experience, but everyone should be able to follow along. It can be done with earlier versions of Illustrator, but takes full advantage of newer features in CS4. Let's get started!

Every few weeks, we revisit some of our reader's favorite posts from throughout the history of the site. This tutorial was first published in August of 2009.

Create a new document 11 inches by 8.5 inches. It can be CMYK or RGB, whichever you prefer. Before beginning, set up a color group of about eight different blues. I will refer to these colors as "1" for the lightest, "8" for the darkest, and the others numbered accordingly.

Draw a square the same dimensions as your artboard, and fill it with a medium blue from your color group. Go to Object > Create Gradient Mesh, then enter 6 rows and 6 columns.

Now manipulate the mesh points to create an amorphous, abstract background. Click individual mesh points and color them with different blues from the color group. It doesn't have to be complicated. This will serve as an out-of-focus landscape or cityscape in the distance. 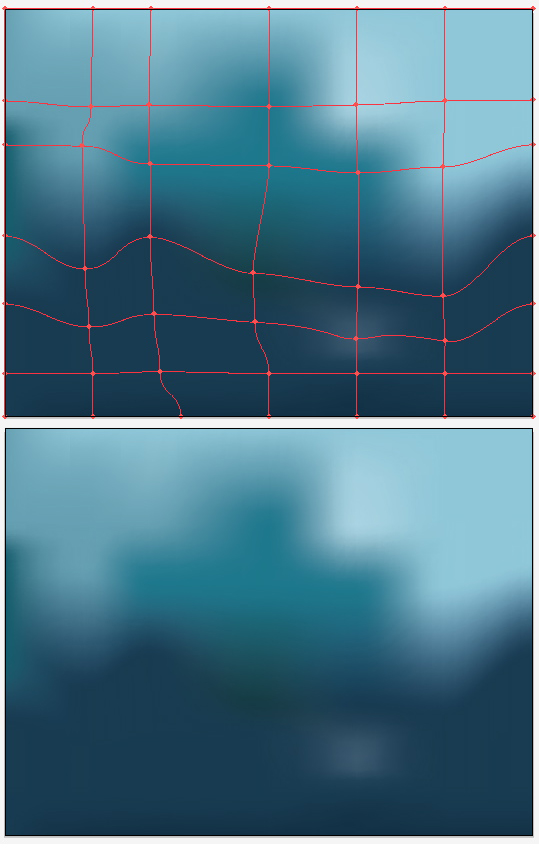 Lock the layer with the background on it, and create a new one above it. Draw several circles of various sizes, and place them randomly above the background. Fill the circles with some of the lighter blues, and change the Opacity to 60% - 80%. These circles are meant to look like lights in the background.

Place lighter circles over the lighter areas of the mesh, and more transparent ones over the darker areas. Select all the circles and go to Effect > Blur > Gaussian Blur. Enter 4 pixels. Select a few circles and change the blur to 6 pixels.

This will give more depth to the "lights." It's okay if some of the circles fall off the artboard &mdash you can trim those later. The illustration should look like the image below. 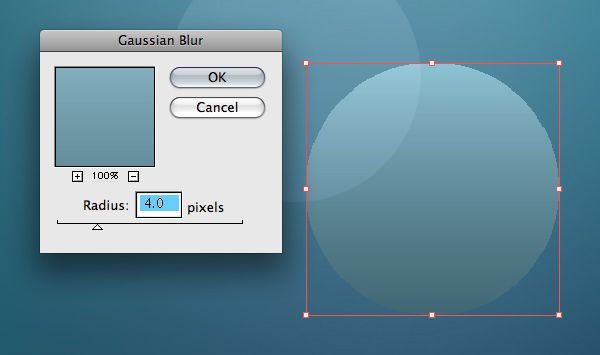 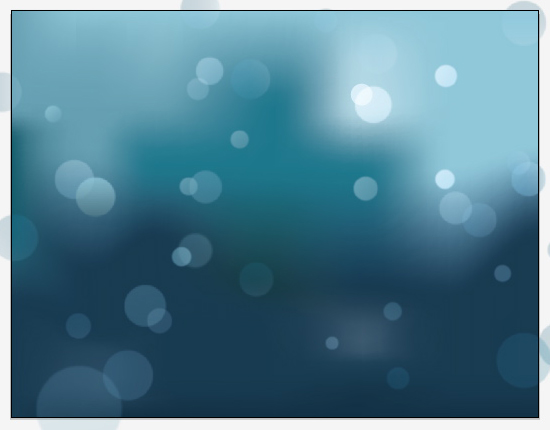 Lock the circles layer and create a new one above it. Draw an ellipse, and fill it with a four-stop radial gradient like the one below. Adjust the gradient so that the white is at the bottom edge of the ellipse. The Gradient Annotator in Illustrator CS4 makes this somewhat easier, but you can achieve the same result with earlier versions.

Apply an Inner Glow to the ellipse, as below. Note: This step is optional. Raster effects may use more processing power, and thus slow things down. Proceed according to the speed of your computer. 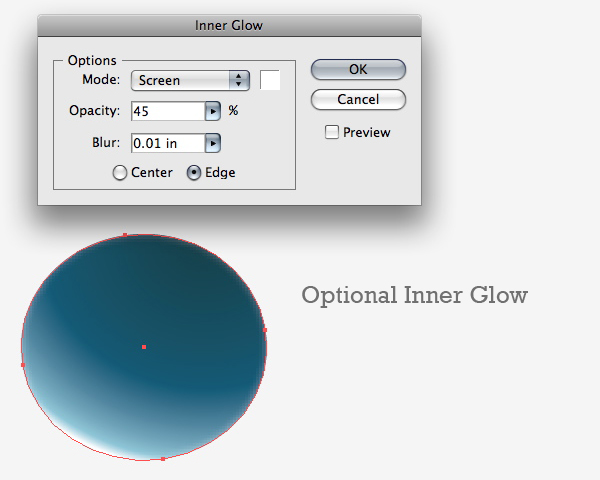 Draw a long, somewhat thin ellipse, and fill it with the lightest blue (Blue #1). Go to Effect > Warp > Arc, and enter the values below. This will be the highlight of the raindrop. Place the warped ellipse over the gradient-filled ellipse you just created.

Arrange it at the top and rotate it off-center. Enlarge or reduce it to fit the raindrop. When it looks good, go to Object > Expand Appearance. Apply a radial gradient to the highlight, as below, and change the Blending Mode to Screen. 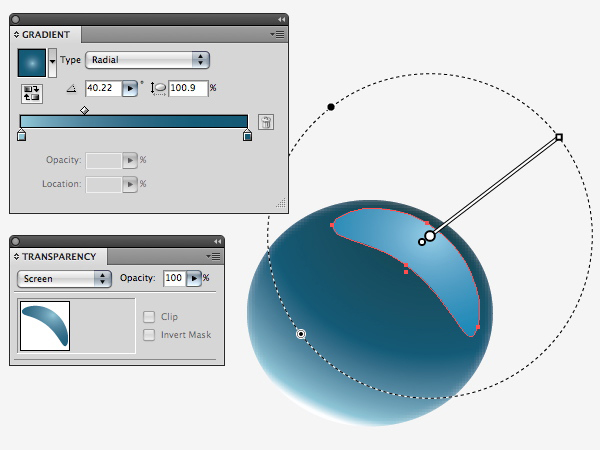 Duplicate the original ellipse, send it behind, and fill it with a subtle, dark linear gradient. Change the Blending Mode to Multiply and the Opacity to 80%. This will be the shadow of the raindrop.

Duplicate the raindrop twice. Adjust the gradients on each; One will be a lighter version of the original, the other will be a darker version.

Drag each drop into the Symbols panel. Choose Graphic as the Type, and name each new symbol if you like. I named mine "Droplet Light," "Droplet Medium" and "Droplet Dark."

Now that you have the symbols created, tear of the Symbolism Tools by clicking and holding the Symbol Sprayer Tool (Shift + S). Move your mouse over the vertical tearoff bar, then release. This will make it easier to use the various symbol tools. Trivia: All the Symbolism tools start with the letter 'S.'

Select the Symbol Sprayer Tool, click on the lighter droplet symbol, and drag the cursor across the top third of the illustration. Spray a few symbols, then Command-click to deselect and start another group.

Loosely cover the top third with droplets. Do the same thing for the middle third, and the bottom third, using the respective droplet symbols for those sections (medium and dark).

Change the diameter of the tool, if necessary, by pressing the right and left brackets. You will end up with several symbol instances, and your illustrations should look something like the image below.

Now select the Symbol Sizer Tool. Randomly click on the symbols to change their size. Hold down the Alt key to reduce the size. You want to end up with lots of different sizes of raindrops. It may take a few tries to get the hang of it. Try clicking directly on top of a droplet to change its size. To further randomize the symbols, use the Symbol Shifter Tool to move them around.

You can duplicate individual symbol instances, and re-size them as a group. Try squishing some of the drops so they are longer than they are wide. It's up to you how wet you want your window to be, so make as many copies of the symbol instances as you like, then rearrange them to look random and natural.

You can now make final tweaks to the raindrops. Randomize the size and placement, and separate drops that overlap. Your illustration should look something like the image below.

Now for some finishing touches. Make a new layer above the "circles" layer, and below the "drops" layer. Use the Blob Brush Tool (Shift + B) and draw a few loose drips, starting at the top of the page.

Fill the shapes with a dark gradient (Blue 8 to Blue 6), and change the blending mode in the Transparency panel to Soft Light. Adjust the gradients so that the drips fade into the window pane.

Press the right bracket key to enlarge the diameter of the Blob Brush and, if you like, draw other shapes or words on the window, as if you are making marks with your finger on a wet window. Finally, trim off the circles and drips that extend beyond the artboard, and you're done!

Cheryl Graham
Cheryl Graham trained as a traditional artist in drawing and painting. These days she spends more time in front of the computer than the easel. She's been using Adobe Illustrator for over 15 years. Her Illustrator work has been featured in the "The Adobe Illustrator WOW! Book" and "Real World Illustrator."
Weekly email summary
Subscribe below and we’ll send you a weekly email summary of all new Design & Illustration tutorials. Never miss out on learning about the next big thing.
Advertisement
Download Attachment
Translations