How to Create a Punk Nouveau Mermaid in Adobe Illustrator

In this tutorial, we'll walk through the step by step procedure of making a mermaid with an affinity for all things punk rock and sold at your local Hot Topic or Spencer's.  From her Hello Kitty belly button ring to her wild and untamable quaff of blue-green hair, you'll be exploring the mind blowing world of color and form that is vector.

When working, I usually start with paper and a pencil. I like the idea of taking my time with my sketchbook on my lap, listening to a few inspirational songs, whether it be heavy metal or opera and working out the details of my next piece. The typical 0.7 leaded pencil works well for small detailing and once finished, it can be scanned into the computer using a dpi of 300.

When I did the initial sketches, I focused on various parts separately. I did the foreground items, mermaid, and background items on separate pages and brought them into Adobe Photoshop to composite. Once I have flattened my layers into one image, the levels were changed in order to darken the lines and define the final shapes for easier vectoring.

Once the sketch has been saved as either a JPEG or PNG it is brought into Adobe Illustrator. This particular file was prepared at 8.5 x 11 to start off. In some cases, you'll need to check your preferences by heading to the top of the bar and clicking on Document Setup > Edit Artboards or using the hotkeys Alt + Ctrl + P, where you can either manually pull the dashed lines around your Artboard to the size you require, or input the size at the top of the bar.

In this step, I've started working on the base skin tones using only my Pen Tool (P) and curves are accomplished by holding down the (Alt) key as points are created to form each path. I've used only two gradients, a light cream: R=244 G=223 B=189 and honey blush: R=170 G=99 B=63 to keep things less complicated. This is a linear gradient with a solid Opacity throughout. As I go, I make sure to label my layers to make things easier on myself in the long run. If this was a more complex project, it would become even more necessary to label my layers, not only for myself, but also in the event that I may have to share it down the road with printers or the like. If you can, try and make this second nature. 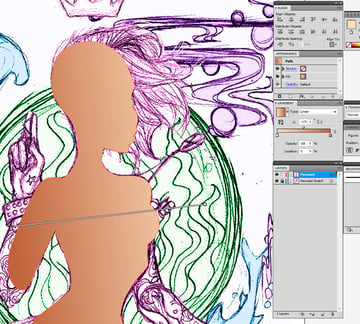 At this stage, we'll start working in the shading and highlights of her skin tone. I usually will go straight for the face, since it's one of my favorite features to create but this time around I'm forcing myself to flesh her out first. I have a good reason for this, a fun reason which we will discuss a few steps later. For now, I am using the same light cream: R=244 G=223 B=189 and honey blush: R=170 G=99 B=63 to make her shadows, but I've lowered the Opacity on the light cream side to 0%. For a few of the darker areas, I've used a honey brown: R=128 G=64 B=54 and a honey taupe: R=179 G=113 B=78 with the Opacity set at 0% on the honey taupe. An example of this is her hand. The inside shading is a bit darker with a Transparency of 53%. For her highlights I am using a variation of whites on either side of my Gradient Scale. The first we'll say is an eggshell white: R=252 G=246 B=213 and the second is a pastel white: R=251 G=240 B=209 with the Opacity set to 0% on my pastel side. This is a Radial Gradient to give it a softer and more natural appearance.

In this step, we are adding her eyes. The whites of her eyes are an off white: R=232 G=235 B=237 initially because we'll add a smaller shape of pure white over it shortly after. This give her eyes a little more definition and our 2D image takes on a little more dimension. The lashes, eye brows, and mole are all done in a pure black later on, and her pupil will not remain this particular color. This is merely a holding shape and we'll address her actual eye color later on.

Once I have my tattoos the way I like, I will Group (Ctrl + G) my elements together and take a duplicate of the initial body layer and move it on top of this layer. I can select these layers now and go to Object > Clipping Path > Make or (Ctrl + 7) to create a mask around these elements. I then lower my Transparency to 75% Opacity to bring the shading out and create a feeling of the tattoos actually being apart of her skin.

In this step I am following the same guidelines as Step 6. The arm is separate from the body, so the same procedure will be executed to form a more unified tattoo.

The next step is to add the lower half of her body and bikini top. Using your Pen Tool (P) make curves that follow the sketch. Her coloring is a slate grey: R=68 G=68 B=86 and pure black within a radial gradient. The bikini top's white is the same color used in her tattoos, and the Japanese sun rays are made from a two tone Gradient of Prussian blue: R=53 G=83 B=164 and deep red: R=69 G=0 B=0.

I will eventually make another layer to put behind the "Mermaid" layer that will include the hair behind her head.

Now we can include highlights to give her that glow sea glass color we're looking for. This two toned radial gradient is made from a bright pastel blue: R=162 G=255 B=246 and a medium grass green: R=85 G=194 B=110 with the Opacity set to 0% on the medium grass green side. 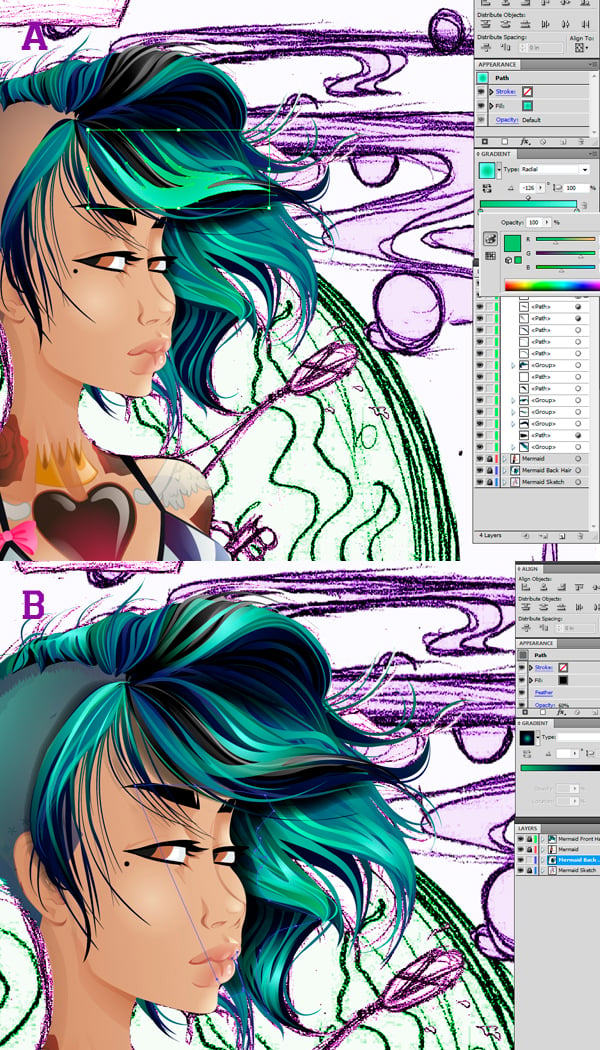 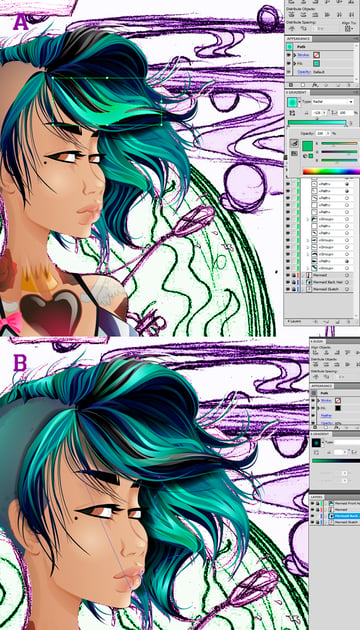 The next application is the pupil color. We're using a Radial Gradient with two colors, a hot pink: R=255 G=69 B=226, and royal purple: R=69 G=0 B=65. Behind this fantastic eye color, I've placed a slightly bigger filled shape of dark purple: R=41 G=8 B=58 and a shine over the top of everything is a pure white Radial Gradient on both sides with the Opacity set to 0% on the side farthest from the center. 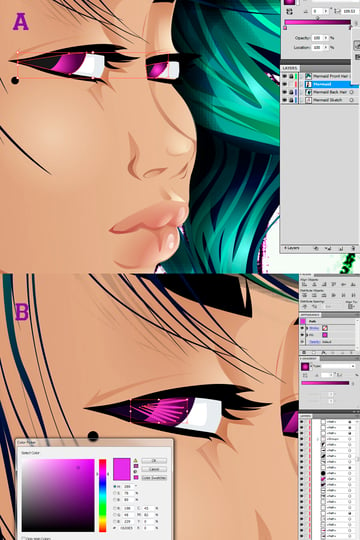 Revisiting our scales tail, we can now start laying down scales. We don't really have to be too detailed with this area, but a few well placed Eclipses (L) shaped to ovals will do nicely. This color is a fog grey: R=179 G=182 B=189 and the same slate grey: R=68 G=68 B=86 we used on the tale base, only this time our Opacity has been turned to 0% on the slate grey side. These elements have been grouped (Ctrl + G) together and the Transparency has been lowered to 28%.

The crazy rainbow belt is made with six sets of two toned gradients, with additional low levels and highlights added as small triangles to give it dimension. It's a bit tedious, but well worth it, when you're finished. A pure black shadow is added underneath with an Opacity of 59%.

At this point, I can make a duplicate layer and add a little softness to her hair. Click Effect > Blur > Gaussian Blur to access the Blur option at a rate of 4.6px and an Opacity of 35%. 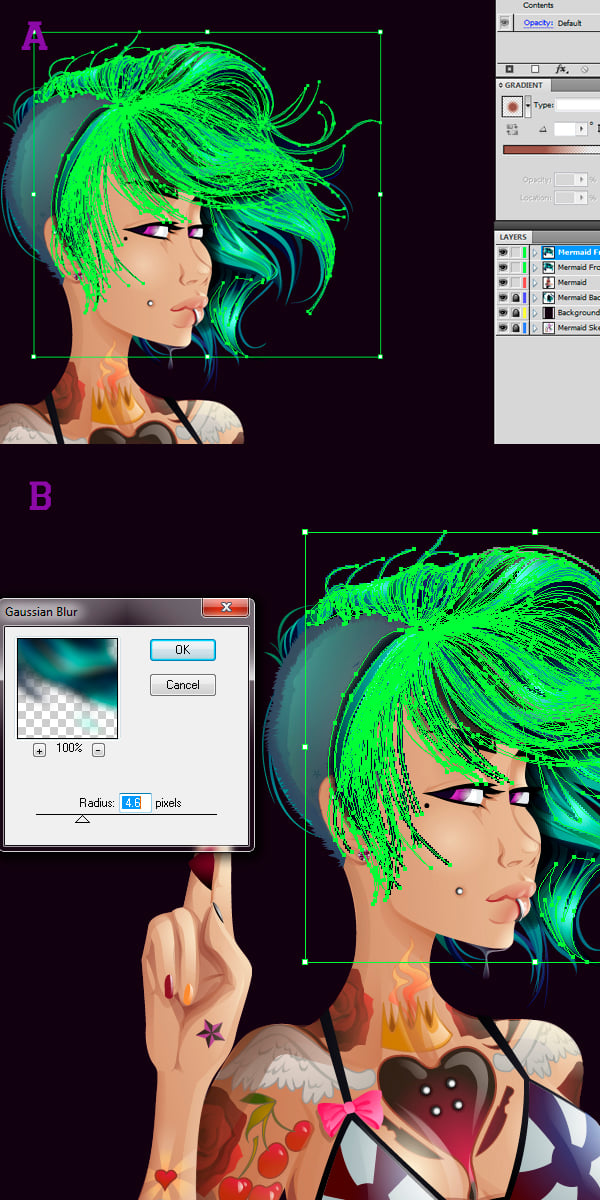 The necklace is chain for our mermaid is a series of dashed strokes. This option can be found underneath your Stroke Weight window under Dashed Line. For a circular link, change the dash to 0.75pt and the gap to 3pt and don't forget to change your Cap to Rounded Cap, and the Corner to Round Join. The line weight is at 3pt. The base color is a medium silver: R=122 G=122 B=122.

Next, we'll be working on the background elements. I've made a new layer called "Crown", and the first thing I've made from myself is an actual crown in pure white: R=255 G=255 B=255. We'll add to this layer a little later.

A new layer needs to be added for our "Sharks". Using our Pen Tool (P) we'll follow the sketches outlines for our fishy friends and color them in accordingly. I will be using a three colored Radial Gradient for our psychedelic background elements. The colors are for the most part an acidic yellow: R=240 G=255 B=92, electric blue: R=28 G=69 B=156, and a live wire purple: R=177 G=0 B=208.

In this step I am following the same procedure as Step 18 in order to achieve my stained glass effect. The seaweed however is a different color. I used a two tone Radial Gradient of lime green: R=162 G=185 B=0 and grass green: R=33 G=46 B=0. Strokes are added accordingly, mostly in pure black with a Stroke Weight of 1 pt.

I've also started adding my ray beams leading from my crown, which are done in a hot pink: R=231 G=0 B=133 to pure black with the Opacity set to 0% towards the black.

In this step we are finally adding our Nouveau-esque flare to the composition. By taking a duplicate copy of the mermaid's body, excluding the masked layers only we can then combine them into one layer by going to Windows > Pathfinder > Unite. This can be illustrated in screen shot where we have a greenish fill. Using the pure black again, turn this layer into a Stroke with a Stroke Weight of 7pt and make sure the Cap option is switched to Rounded Cap and the Corner option to Rounded Join. This prevents you from having unnecessary sharp edges. In the Nouveau style, rounded edges are a key point to observe.

Next, we will make our wave design using our Pen Tool (P) and following our sketch's curves. The coloring is the exact same as our shark color in Step 18, so refer back to it for the specific tricolor you need.

Once we are happy with how our new wave designs look, we can add a pure black shadow by duplicating the layers and using a Gaussian Blur of 5.0 pixels and the Opacity taken down to 71%

The same steps are done with our mermaid, but the Opacity is lowered to 42% due to the brightness of the background element. The background is a deep purple: R=22 G=2 B=22. 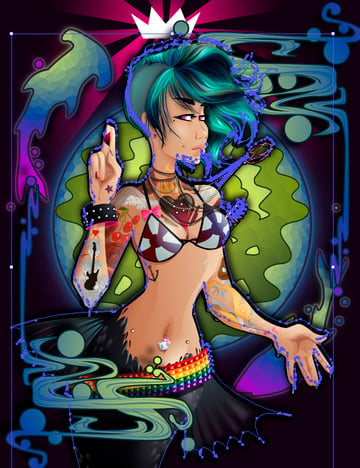 I truly hope you had as much fun reading this tutorial, as I had creating the artwork for it. The combination of solid outlines and bold colors gives off both a modern and alternative feel to the wonderful and classic world of Art Nouveau in my opinion, and I hope this was the same conclusion you came to as well. If you'd like to check out more tutorials with a similar Art Nouveau theme, check out this tutorial on creating an Art Nouveau poster. 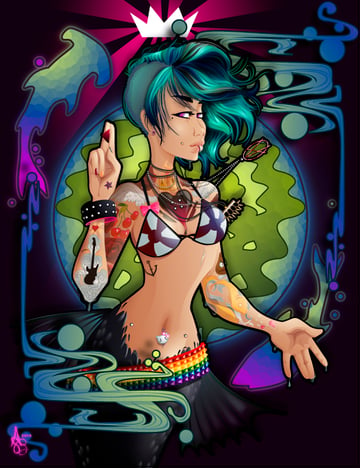 Asher Benson
I'm a Freelance Vector Artist specializing in brain bleeding color since 2005. Adobe Illustrator and I have had a bumpy start to our relationship, but with a little time and a lot of patience, we've had eight successful years and have rendered many brilliantly colored children together. As a graduate of Pratt Institute in Brooklyn, NY as of 2006, I've earned my Bachelor's Degree in Fine Arts with a concentration in Traditional Animation. If you're looking through my website, you'll find links to all of my social media sites, including DeviantART which I've been a proud member of since 2005.
asher_bee
Scroll to top