How to Create a Nuclear Disaster Landscape

As designers we are often asked to create fictitious landscapes for whatever project we are working on. Creating an image such as this usually takes a combination of careful image selection and knowledge of Photoshop’s tools and techniques. In today’s tutorial we will demonstrate how to create a nuclear disaster landscape using a dozen or stock photos.

The following images and resources were used in this tutorial. They can be seen in the image below. 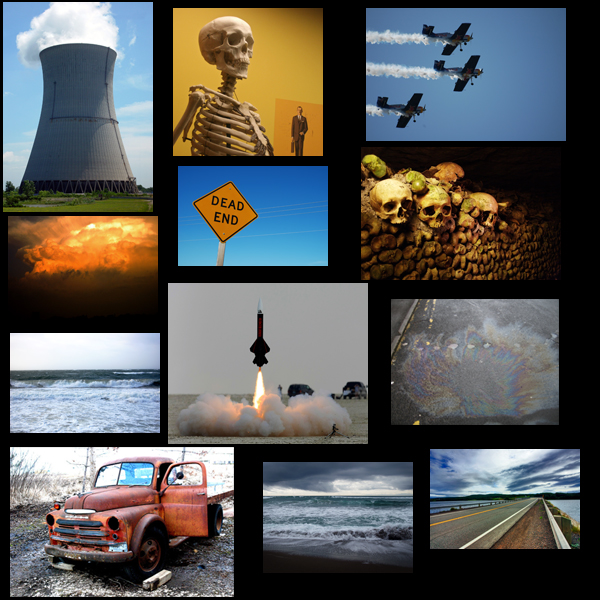 First, Open of the Road image.

Use a gradient map by going to Layer > Adjustement Layer > Gradient Map to darken this photo a bit. Use the settings below: 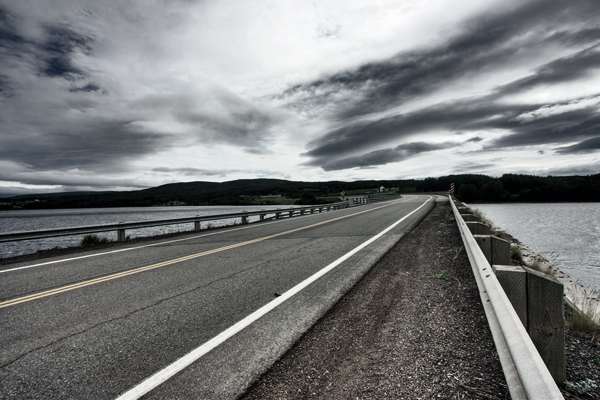 Now, open the Car Stock Image and copy and paste it into your working document. Name the layer “Car.” Use any method to remove the Car/Truck from its background. 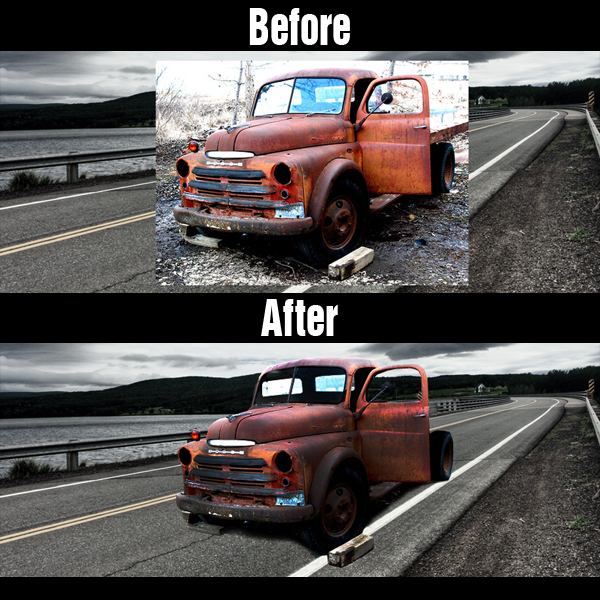 Step 3 - Add a Shadow Under the Car

In this step we will make sure that we can see the background through the windows of the car. To do this, take the Rectangular Marquee tool and make a selection of the background layer directly behind the windows. If you need to, feel free to lower the opacity of the Truck to ensure that you are selecting the right spot. Paste this selection directly above the “Car” layer and hide it.

Step 5 - Add a Skeleton Inside the Car

To add the skeleton, extract it from its background and then copy and paste the end result into your working document. Resize and position it as shown below. Place it above the “Car” Layer and Delete the excess areas. Lower the Opacity a bit and name this layer “Skeleton.”

Step 6 - Add a Pool of Gasoline

Paste the Gasoline photo into your working document. Resize, position and transform as shown below. Use a soft brush to erase the parts that you do not need. Now adjust the Brightness/Contrast. Name this layer “Pool of Oil.” 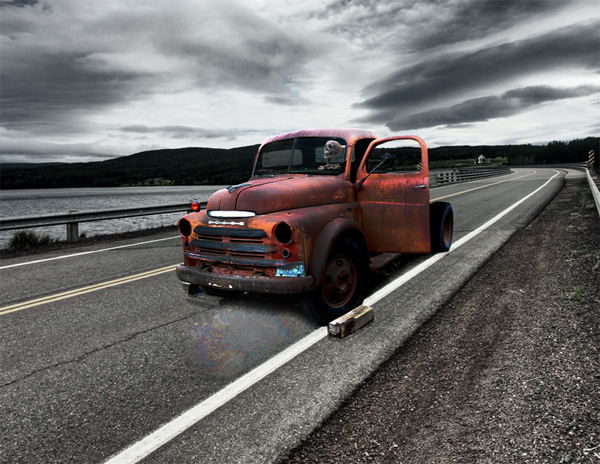 Paste the Dead End Sign into your working document and extract it from its background. Place it as shown below. Use the Burn Tool to darken the right side of the sign. Name this layer “Panel.” 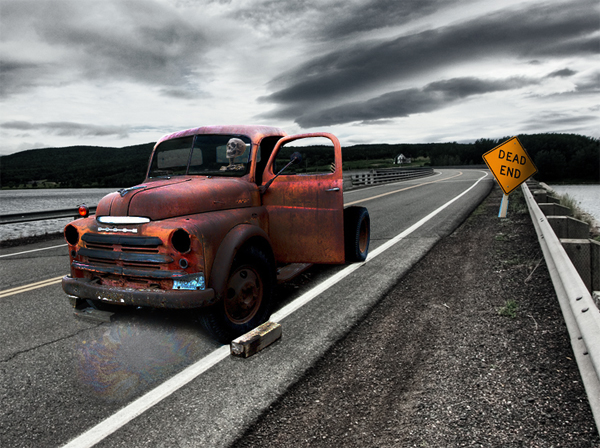 Paste the Skull Heap image into the document. Extract it from its background as shown below, flip, and position it appropriately. Use the Burn tool to darken it a bit and name the layer “Skull Heap.” 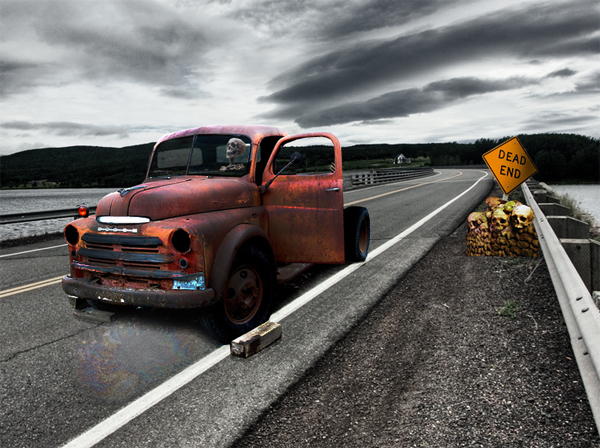 Add a shadow to the heap using the same technique that we used in Step 3. Name the shadow layer “Shadow Heap.” 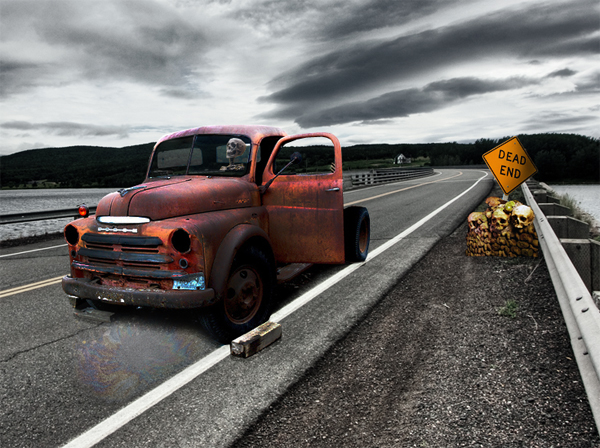 We want our road to look a bit less pristine. To break up the pavement we will use these Brushes. Select a black brush and place a crack as shown below.

Copy and Paste the Nuclear Missile into your working document and extract it from its background as best as you can. Resize and place it as shown below. Name this layer “Nuke.” 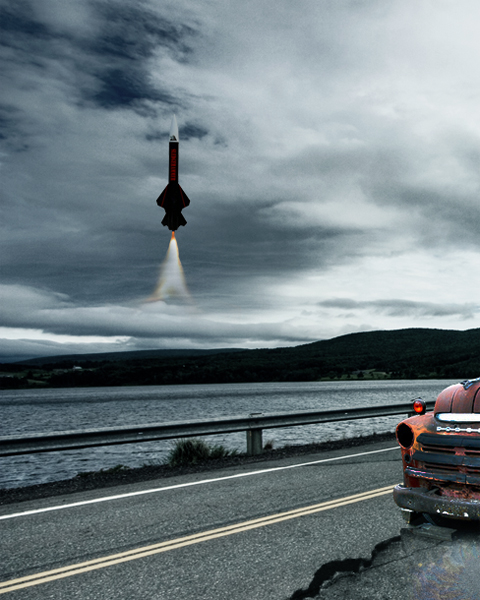 Step 13 - Add an Explosion Under the Nuke

Now copy and paste the Explosion photo into your working document. Use a soft eraser to remove the unwanted areas of the explosion and place it as shown below. Name this layer “Explosion.”

As you know an explosion would cause some shockwaves. You can add the shockwaves by copy and pasting a photo with some nice waves into the document and by erasing the unwanted areas. First do this on the left side and then do it on the right as well. Name each side “Left Water” and “Right Water” respectively.

Adjust the color of the waves using the Color Balance Adjustment under Image > Adjust > Color Balance and set to +19/-16/-8. Do the same for the "Right Water" layer.

Now extract the Reactor from its background and paste it into place. Name it “Nuclear Reactor.” 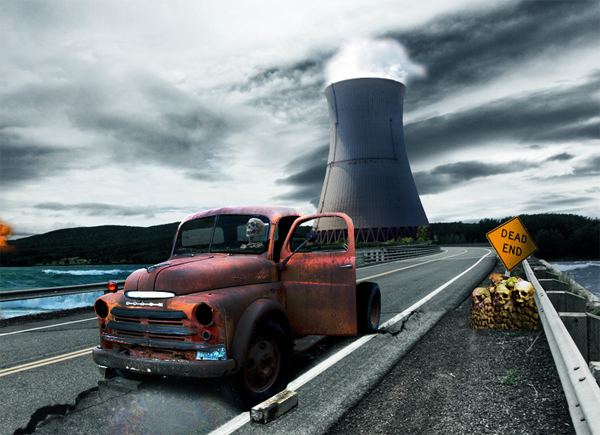 Use the settings below to adjust the lighting of the reactor using the Burn and Dodge tool.

Step 18 - Add Cracks on the Nuclear Reactor and Darken Vegetation

Using the same technique you used in Step 10, use the crack brushes that you downloaded earlier to apply some cracks to the reactor.

Now grab a black brush, lower the opacity to 76% and change the brushes blending mode to Color. Use the brush to darken the vegetation.

Step 19 - Add Lights and Smoke to the Roof

Find a photo of fire similar to the one placed on the roof below. Use a soft eraser to remove unneeded areas.

Next, take the Eraser Tool (E) and use a soft brush with low Opacity to erase all except the source of light, like this : 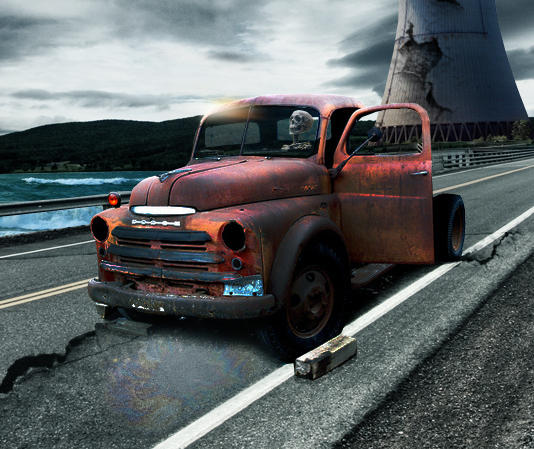 Name this layer "Roof Light 1", duplicate it, then go in Filter > Distort > Motion Blur, same Angle as before, but this time enter a Distance of 144. Replace it and lower the Opacity to 70%. 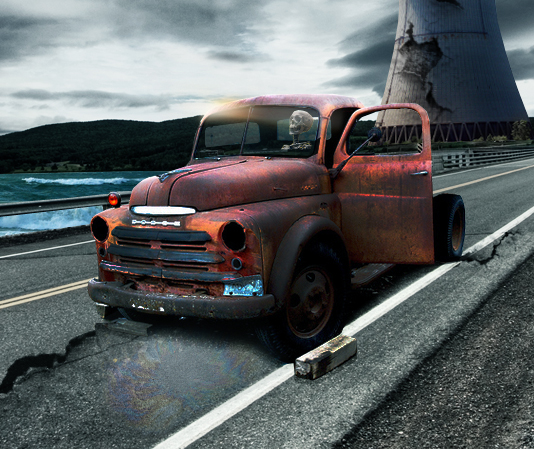 Step 20 - Add Lights and Smoke on the Hood and Bumper

Use the same technique outlined in Step 19 to place some lights on the hood and bumper as shown below.

Copy and paste the plane photo into your working document and extract it from its background. Resize the image and place it as shown below. Now apply a Brightness/Contrast adjustment to this layer using the following settings -20/+10.

Apply some shading to the plane using the Burn and Dodge Tools. Name this layer “Plane.”

On a new layer, brush a strong yellow color using a soft brush over the smoke. Lower the Opacity to 36%. Name the new layer “Flames Plane.”

Create a new layer and fill it with black. Name the new layer “Halo,” and set the opacity to 40% . No go to Filter > Render > Lens Flare and use the settings below.

Step 24 - Touch Up the Detonation

Take a large soft white brush and paint over the flare that we created in Step 23.

To darken the edges of the image create a new Levels Adjustment by going to Layer > Levels. Use the settings below. After that add a layer mask to the adjustment layer and take a soft black brush and paint the middle as shown. Set the layer’s opacity to 66% and its blending mode to Soft Light.

Now let’s add a layer of grunge to our composition. To do this, find a grungy texture and place it on the topmost layer. Set it to Overlay and lower the opacity to 10%. Name it “Grungy.”